Why Were We So Obsessed With Big-Screen TVs in the 1990s?

Even at the time, those worthless hunks of yard-sale fodder just weren’t worth the money

Those were the words that turned my head about four years ago when I was looking for a big-screen TV for my basement. And by “big-screen TV” I don’t mean a nice-sized LCD screen or anything like that — I mean those huge, hulking TVs that were the electronic luxury item of the 1980s and 1990s.

I wanted the set for all my retro gaming systems like my Nintendo, Super Nintendo and Sega Genesis, as I’d read that those games play a little faster on older tech. While it’s only the difference between eight milliseconds and four milliseconds, that time can be crucial in an intense round of Mortal Kombat. Also, some games are completely incompatible with new TVs, like Duck Hunt, as the light gun tech relied on cathode ray tube technology.

So I picked up this 45-inch monster, fit it in the back of the truck I borrowed from my friend and single-handedly unloaded it and lugged it down into my basement, one step at a time, hoping it didn’t fall apart with each little thump. Setup was easy, and before long, I was transported back in time, playing Super Mario Brothers, Teenage Mutant Ninja Turtles and the aforementioned Duck Hunt. Sure, the image was kind of fuzzy and the sound was garbage, but for those few hours, I didn’t care — after all, when I was a kid growing up in the 1980s and 1990s, TVs like this downright enchanted me, but unfortunately, they were always out of my lower-middle class grasp.

Nowadays, screen size is taken for granted; someone can buy a 52-inch flat screen for a few hundred bucks on Black Friday, and it weighs only a few pounds and can be easily mounted on a wall. But back in the day, a big-screen TV was insanely heavy and took up a shit-ton of floorspace. For many people, they just weren’t an option.

The reason these beasts were so massive was because of the technology they housed. While old-school cathode ray tube TVs worked by firing color beams through an electron gun and generating the image directly on the screen, big-screen TVs worked via rear projection, so the image was generated inside the TV and then projected onto the screen via a mirror, which is why those TVs were also called “rear-projection TVs.” 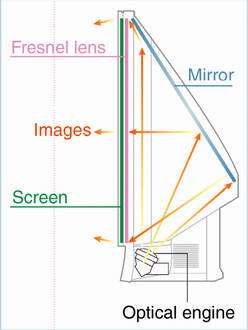 Rear-projection TVs actually date all the way back to the 1940s, when it was tough to manufacture traditional TVs that measured over 12 inches, but these TVs were only made for a few years before traditional TVs were able to be made larger. Still, cathode ray tube (CRT) TVs had their limitations, as the tech maxed out at around 36 to 40 inches. After that point, CRT TVs became too damn heavy with all that glass. In fact, the biggest CRT TV ever sold was a Sony PVM-4300, which measured 45 inches and weighed an ungodly 440 pounds. Rear-projection TVs may have been bulky, but they weren’t nearly so heavy, as much of the interior was empty space simply reserved for projecting and reflecting images.

Starting with a three-inch screen in 1928, TV screens gradually got bigger and bigger over the decades to come, but in the 1970s, this reached a fever pitch as basic cable began to enter more and more homes. Ron Simon, the senior curator at the Paley Center for Media, explains that pay-per-view also played a role, as the service began to enter people’s homes in the 1970s. Previously, Simon says that people might go to a theater to watch a boxing match with Muhammad Ali on a closed-circuit TV signal, but once they could get that in their homes, they wanted a big screen to help replicate the experience.

These big screens came about in a few different ways. There were regular projection TVs, where a projector would be housed in a coffee-table like structure on the floor and others where a front-reflected projection would hit the screen via a mirror in an open drawer. Over time, though, the rear-projection TVs would prove to be more popular, most likely because they were more self-contained.

But these big TVs were expensive, so the market for them wouldn’t become mainstream for quite some time. In a 1977 episode of The Price is Right, a SegaVision projection TV was marked at $1,895, which in today’s cash would be a startling $8,000. Because of their prohibitive cost, Simon says that big-screen TVs mostly remained a luxury item, purchased by trendsetters like Hugh Hefner and sports bars that were buying them to attract customers. He also says that, in the early 1980s, one of the selling points of the Paley Center — then called The Museum of Broadcasting — was that you could watch television on these big screens.

During the 1980s, the big-screen TV would grow in popularity, but they remained pricey. As a 1982 issue of Popular Mechanics reported, “A new breed of television receiver — the large-screen TV — is getting bigger and better every day. If you want a movie-theater look, it’s yours. But be forewarned, the price tag can be as enormous as the screen.” While the price would gradually come down throughout the 1980s, they were still going for nearly $1,500 by 1989, which would be about $3,000 today — hardly affordable for a family on a budget.

While the rear-projection big screen TV would never replace the far-cheaper CRT sets, in the 1990s they reached their height in popularity as the ultimate guy item, perfect for that sports-loving regular joe who just wants to watch the game on as big a screen as possible. Like any other good 1990s reference point, the big-screen TV would become the subject of parody in a Weird Al Yankovic song, “Frank’s 2,000 Inch TV,” in which, as you may have gathered, a man named Frank gets a TV that measures a full 2,000 inches.

Big-screen TVs also became a cultural touchpoint on most 1990s television. In a 1993 episode of Seinfeld, the gang buys a big-screen TV as a wedding gift for the Drake. In a 1994 episode of Martin, Martin buys one with the money from he and his girlfriend Gina’s shared checking account without getting her permission first. A big-screen TV is also featured as the centerpiece of Doug’s man cave in the 1998 pilot of King of Queens, and in the 1999 unauthorized biography of James Van Der Beek, the authors recount that “the hunky star of TV’s Dawson’s Creek,” bought a big-screen TV shortly after the show began. But probably the most iconic example of the 1990s big-screen TV craze came on a 1996 episode of Friends, when Joey buys a big-screen TV and two leather recliners for he and Chandler’s apartment, which causes them to become lazy schlubs for the remainder of the episode.

The big-screen TV, by its very nature, never stopped being obnoxious. It was obnoxious in the beginning of its rise in American homes, as evidenced by this hilariously dated 1983 commercial for the Zenith Space Screen 45, where the generic nagged husband character just wants to “watch the big game,” while the generic nagging wife character “doesn’t want a giant screen taking over [her] living room.”

Fourteen years later, in a 1997 episode of Frasier, Frasier gets a big-screen TV for his dad, but quickly regrets buying it as it’s also taken over his living room. In the Nicktoon Rocko’s Modern Life, the big-screen TV that Rocko buys ends up abducting the brain of his buddy Heffer, which, as any parent will tell you, isn’t that far from reality. Though maybe the best illustration of how obnoxious these TVs were was from a 2007 short starring Goofy, where Goofy installs a convoluted home theater system and everything goes wrong in classic Goofy style.

These TVs weren’t just bulky, however; they were also generally not that good. Because they were a reflected image instead of a direct one, the image was darker than a traditional TV — to compensate, they utilized a stronger bulb, which burned out sooner than most TVs. Also, despite a bigger screen, the resolution was often lower because it was a smaller CRT image, reflected to look bigger. Further, they had a limited viewing angle, which meant that you basically had to be sitting straight in front of it to see anything at all.

In fairness, over time, these problems improved and the units would become smaller, but they wouldn’t be able to compete with flat-screens TVs, which hung like a picture on the wall. Indeed, as Goofy was tangling with his massive set in 2007, rear-projection screens were already on their way out, giving way to plasma and LCD screens as the luxury TVs of choice. And in 2012, the rear-projection screen would officially die out when Mitsubishi exited the TV market, taking with it the last rear-projection TVs available.

In the years since, the only way to get a rear-projection TV is at your local Goodwill or at a neighbor’s yard sale. Or, like me, you can get one for free from someone who just wants that worthless bulk out of their house — and let me assure you, those TVs are quite worthless. I’ve probably only played my classic games on mine two or three times in the last four years, preferring the clearer picture and superior sound of a modern TV. I also discovered that I can’t tell the difference between 4 milliseconds and 8 milliseconds, so that whole “lag” thing didn’t matter, either.

Finally, I was reminded that Duck Hunt is boring as fuck and is certainly not worth having this giant, obsolete monster in my basement, where it now sits disconnected, collecting dust in a corner.

Speaking of which, if anyone wants a free, big-screen TV, let me know, I’ve got one with your name on it.