Bernie Is a Meme Because He’s Alone in the Swamp

The Vermont senator’s normcore style has come to represent his honest, practical politics

We might have memed our way to a Joe Biden presidency. All those Obama-era Onion articles depicting the veep as a beer-swilling, Trans Am–driving, affable dirtbag uncle made him seem way cooler than he is — to the regret of at least one writer. But as Joe was sworn into the highest office of the land, the internet was laser-focused on a true meme god: Sen. Bernie Sanders.

Bernie, who to the horror of the GOP is now Senate Budget Committee Chair, looked about as thrilled to sit through speeches in mid-40-degree weather as any 79-year-old could be. The guy stumped hard for Biden, a rival in the Democratic primaries, but that doesn’t mean he has any appetite for the ceremonial crap that comes with the transition of regimes. Clutching a manila envelope, he seemed ready to get back to work as soon as possible. As for his winter style, he appeared to be in the same beige Burton ski coat he wore for a popular (and equally memeable) campaign video in which he asked “once again” for financial support. Everyone pointing this out got more or less the same reply: Did you actually expect Bernie to own more than one coat? The mittens, his bit of flare, turned out to be homemade by a constituent from recycled material.

Would Bernie have cleaned up more if he was speaking, or the one being inaugurated? We cannot know, and maybe that’s a silver lining for those of us who supported him in the race for the nomination: never finding out how the presidency might have altered or corrupted his practicality and plainness. Around the Capitol, the Bidens, the Harrises and the Obamas greeted one another in designer attire: dark suits and topcoats for the men, regal jewel tones for the women. It makes sense to see the leadership in their finest for the occasion — in non-pandemic times, a formal ball would follow — but it is a clue to the linkages of wealth and power in Washington and throughout the country. Bernie still gets to reject that polish, and we love him for it. He is our dude, never down with the bullshit of pretending to be someone else.

Even the rumpled paper face mask, in contrast to the political elite’s preference for sleek fabric coverings, betokens a deeper set of principles. Biden is the man of the hour, but unlike Bernie, he has often sat on the wrong side of history. That’s because he has sometimes sided with an immoral majority, and elsewhere prized symbolic “unity” and bipartisanship over justice. He was inspired by the election of JFK, whose telegenic prowess foretold a government driven and defined by images. Bernie, meanwhile, doesn’t want to create nice images, but organize, and so visually blends into the grassroots, working-class, no-frills movement for which he is a champion. As the slogan goes: “Not me. Us.”

Yet this collectivist thrift inevitably sets him apart in a Beltway world of expensive haircuts and fussy tailoring, and he ends up a fashion icon all the same, the stubbornly normcore grandpa unstained by corporate lobbyists and personal vanity. 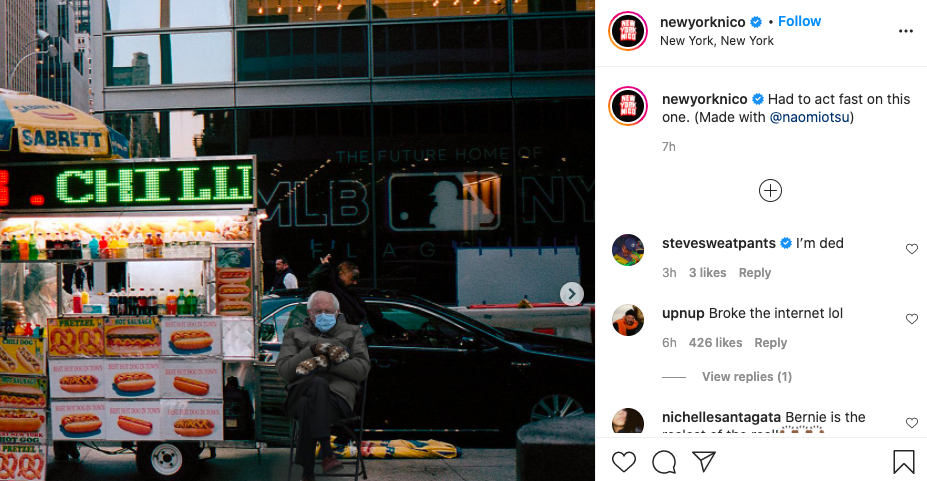 Trump’s eternal promise to “drain the swamp” was absurd coming from a venal fraudster like himself, but it doesn’t mean he was wrong about the fundamental character of the capital, with all its influence-peddling and back-scratching. Bernie now has progressive allies in the Squad, but they are a chamber and a couple of generations removed from him; in a dysfunctional and often obstructionist Senate rife with some of the district’s most calculating cretins, his singularity is striking, and has been for a long time.

We would not celebrate his homely aesthetic and curmudgeonly airs month after month if they served as a disguise for a noxious ideology, nor does simple popularity among the youth account for the wealth of admiring, irreverent memes. Nobody else would gain respect by having a chair noticeably piled with laundry in their home. It must be that we cannot get enough of Bernie as radically ordinary. Running somewhere when he’s late. Staring intently at his phone. Playing the monster when his nap is interrupted. There’s nothing strange in these moments — except that his authenticity doesn’t feel controlled or workshopped.

Whatever your reservations on President Biden, if you want this nation to swing left, you’re happy this guy is better-positioned than ever to push toward that dream. And, more to the point, that this newfound status hasn’t inspired him to buy a comb or give up his basic townie ensembles. Bernie stands (or sits) alone, inspiring others to join him. Someday, we’ll have an inauguration where everyone can dress as they’d like. Until then, thank god he’s keeping it real.