The New Satanic Panic Is Bigger Than You Think

In the U.S., the term “satanic panic” usually refers to a string of unproven allegations of ritualistic abuse throughout the 1980s, much of it focused on the proprietors of daycare centers. However, some journalists at the time compared the paranoid climate and controversial court cases — which resulted in many wrongful convictions overturned years later — to an earlier American panic that followed much the same pattern: the Salem witch trials of the 17th century.

Today, the tradition of spreading urban myths and conspiracy theories about some blood-drinking cabal of devil-worshippers is alive and well in QAnon, whose adherents believe in a global sex-trafficking ring run by pedophiles and child murderers. This had led to declarations that the satanic panic, with its heightened rhetoric and false accusations, is back, or never really went away. But whether you see this as the return of the repressed or the ongoing evolution of a consistent trend, it appears to have a strong partisan valence in 2021: QAnon is an avowedly Christian and devoutly right-wing movement, which means those they perceive as demonic enemies include Democrats, Hollywood celebrities, Jews, Muslims and anyone challenging their Biblical worldview. On some matters, however, QAnon and related forces team up with allies you wouldn’t expect — like the political leftists refusing to take the COVID-19 vaccine. 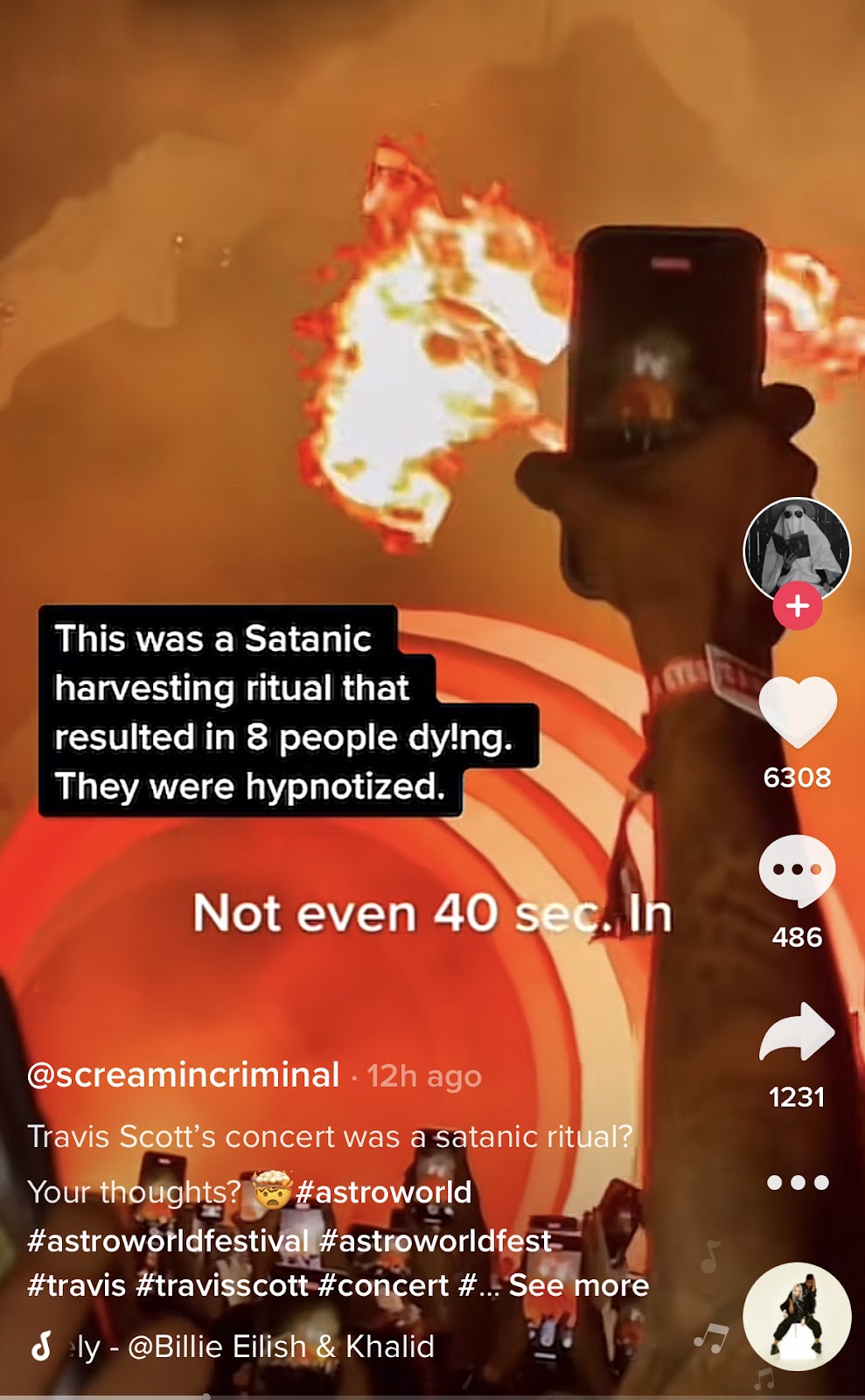 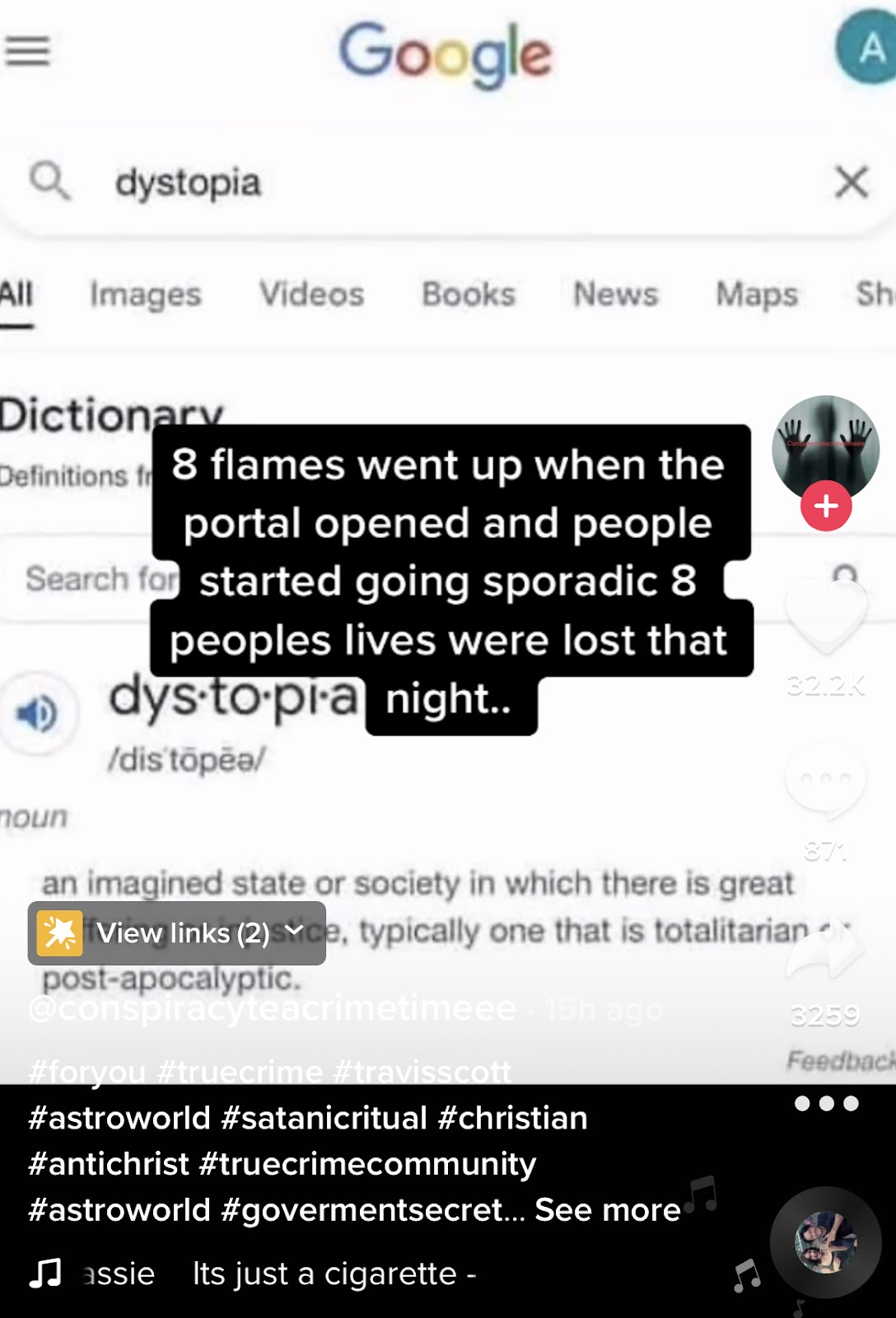 The tragic events at rapper Travis Scott’s Astroworld Festival in Houston on Friday night — eight dead and hundreds injured in a terrifying crowd surge — are becoming a new point of overlap between QAnon types and people not yet initiated into the cult. On Q forums like The Great Awakening, users were quick to identify “satanic” imagery and slogans that make up Scott’s concert aesthetic, concluding that he had performed a “ritual sacrifice.” One thread posited that Live Nation, the company that organized the event, are the true satanists, and put on shows with the explicit intent to kill attendees (“live is an anagram of evil and nation is an anagram of anoint,” wrote one commenter).

This is standard stuff for Christian extremists and conspiracists, but it also made for viral content on TikTok, where influencers have latched onto mystical logic, hidden meanings and alternative analysis as ways of growing an audience, whether they’re describing astrological conditions or picking apart a criminal investigation.

While some of the young personalities pushing the satanic (or otherwise supernatural) angle are indeed outspoken Christians condemning what they regard as blasphemy, others seem to be drawn to the occult explanations as provocative, convincing or valuable in themselves. Every generation has been susceptible to scary rumors and superstition, and with social media, we can see how far they spread through networks of open credulity. Perhaps more dangerous than the Astroworld misinformation is that it may serve as a gateway to radicalization, just as QAnon sucked in worried moms with a “Save the Children” front.

Watch a Christian TikTok user’s video about Travis Scott being a satanist, for example, and you could soon be learning whether Lil Dicky is the anti-Christ, or what you’re really hearing when you listen to hip-hop lyrics.

These are, of course, the same tropes that characterized the 1980s moral panic over heavy metal rock, which critics tried to censor by tying to the supposed eruption of satanic violence across the country. That rap music now serves as the target feels not only like a measure of its popularity and transgressive material (remember when Lil Nas X gave the Prince of Darkness a lap dance?), but an indication of how these fears live in the mainstream as well as the fringe.

In the coming days, we’ll learn that the Astroworld catastrophe had tragic, mundane causes, probably a range of safety violations and security lapses, that offer no opportunity for revelations of supernatural malice. Before then, the satanic narrative will have been embedded in the public memory as, if not the most plausible, then at least the most shocking version, a case to refer back to the next time you want to suggest someone is in league with the devil. That’s the way previous panics worked: The first unproven story is proof of the imputations to come. If we’re going to panic about anything, it should be the mass enthusiasm for this same old shit.