The Prehistoric Tales of a 50 Million-Year-Old Bug Penis

Meet the assassin bug. Then meet his astoundingly rare, beautifully preserved genitals. It’s a dick that can teach us a lot about nature (and ourselves)

A 50 million-year-old bug dick is having a moment.

Recovered from the Green River Formation in present-day Colorado, the fossil represents a new genus and species of predatory insects known as assassin bugs, per a recent report in the journal Papers in Palaeontology.

Being able to see a bug’s genitalia is very helpful when trying to determine a fossil insect’s place in its family tree, says Sam Heads, a paleontologist at the Illinois Natural History Survey and self-described fossil-insect-genitalia expert, who led the research with Daniel Swanson, a graduate student in entomology at the University of Illinois. The fossilized insect is tiny and its genital capsule, called a pygophore, is roughly the length of a grain of rice. Remarkably, the bug’s physical characteristics — from the bold banding pattern on its legs to the internal features of its genitalia — are clearly visible and well-preserved, as is the fossilized beetle in its grasp. (No, that’s not the dick.)

The fossil was first pried from a rock in the Green River Formation in 2006, and the extraction process split it into two mirror images, each stretching the length of the bug’s body, that ended up in the hands of different fossil collectors. One of them, Yinan Wang, contacted Heads on a hunch that it was new to science and paper-worthy, which it was.

Here, then, are a few takeaways from the latest addition to the collection of fossilized phalluses.

Scale aside, insect penises aren’t much different than ours.

As an intromittent organ, bug dicks operate exactly the same way mammal penises do. Granted, insects are a phenomenally diverse group of organisms and vary widely in the structure of their genitalia, but in general, male insect genitalia is a combination of sclerotized hard parts and membranous soft parts held within the body. When it comes time to mate with the female, the phallus is inflated and comes out of the body and enters the female through a vent-like structure at the end of her abdomen.

“That’s pretty typical,” Heads explains as we watch the video above together. “You see the penis is inflating and coming out of the end of the abdomen, and he’s trying to get it into the female’s vent. She’s giving him some trouble. There we go. Yep, it’s in. The male will deposit a sperm packet inside the female and then she’ll save that.”

Heads and Swanson’s discovery is consistent with the (impressive) bug dick in the video, and strongly matches the basic structure of assassin bugs living today. Since their specimen was only 50 million years old — a mere pup in geological time — they were able to compare the structures of the phallic complex with its close relatives, banded assassin bugs of North America. “That was hugely important for being able to place this organism within a taxonomic framework and determine where it belonged in the family tree.”

That’s because bug dicks are the ultimate identifier.

Species are often defined by their ability to successfully mate with one another, as small differences in genitalia can lead to sexual incompatibilities that may result in the rise of new species over time. Male insect genitalia are particularly useful in differentiating between species because they look so similar from the outside. Their penises, though, have unique structures and shapes based on which species they belong to, known as genital differentiation. An example of genital differentiation is the corkscrew shape of duck penises, which fit into the female reproductive system. Similarly, the assassin bug’s penis corresponds to a unique structure in the female, meaning only members of the same species can mate with each other.

Fossilized insect genitalia also tells us how old they are, like rings on a tree.

Assassin bugs have the equivalent of a codpiece.

A cup-like structure at the end of the male abdomen contains all of the genitalia, known as the phallic complex, which is held inside the capsule for protection. When the time is right, the end of it opens up and the penis comes out to do its business. Also visible in this discovery is the basal plate, a rigid, sclerotized support structure that helps the bug maintain its erection, and the phallotheca, a pouch the penis retracts into when not in use. 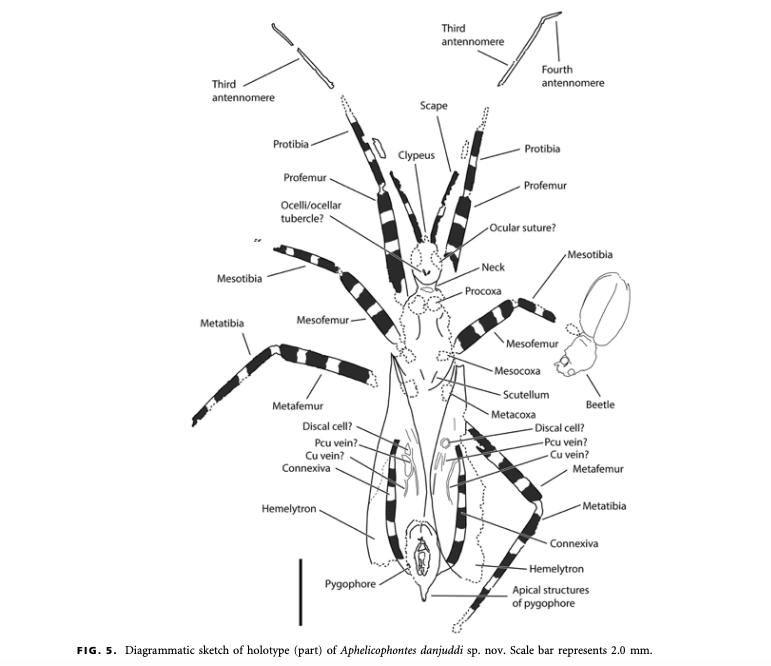 It’s “unheard of” for insect genitalia to be so well preserved.

Most of the insect genitalia is inside the body, so when an insect is preserved as a fossil, usually the genitalia are unviewable. Again, though, this fossil was split directly through the body, allowing Heads and Swanson to study the interior of it. Heads says that some fossils, like Amber fossils, may sometimes include genitalic structures, “but in rock fossils like this, it’s practically unheard of.” “It has color bands on the legs, and all the antennae are there and everything,” he marvels.

That said, this isn’t the oldest bug dick ever discovered.

That honor belongs to a species of daddy longlegs preserved in a rock in Scotland, estimated to be 400 million years old — a paragon of prehistoric bug dick energy.