The ‘Are Ya Winning, Son?’ Meme Tracks Gaming’s Wholesome Evolution 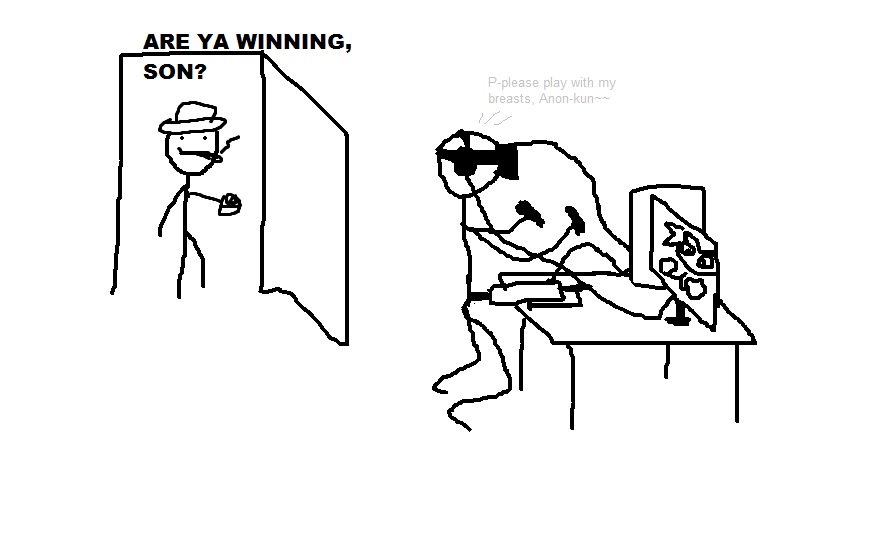 Over the next several months, the meme appeared on FunnyJunk and r/justneckbeardthings, where it gained popularity and struck a chord with gamers. Its acclaim inspired new, mostly depressing variations well into 2015: One portrayed the son merged with his computer, like a lifeless cyborg. Another showed him having committed suicide.

The “Are Ya Winning, Son?” memes created in 2014 and 2015 all tell the same story of a boy imprisoned by gaming and a father aloof from his digital lifestyle. On the surface, it implied that video games can and will separate you from your real-life relationships. Looking closer, though, it suggested that the boy may feel less divorced from reality if his father made an effort to understand his games, instead of posing a shallow “Are ya winning, son?”

This symbolism reflected the negative public opinion of gaming and gamers in the 2010s — and long before then. The 1999 Columbine shooting was blamed on the first-person shooter Doom. The highly publicized 2002 suicide of Shawn Woolley was attributed to an addiction to the online roleplaying game EverQuest. The 2012 Sandy Hook shooting was initially credited to the third-person shooter Mass Effect.

Despite there being no real causal link between video games and violence, politicians and the public have spent decades demonizing them, and the victims of that demonization are the gamers themselves, those represented by the boy in the “Are Ya Winning, Son?” meme. Every gamer can relate to this young man: They understand the appeal of collapsing into your computer when the people around you view your hobby as, at best, a waste of time.

In addition to making gamers feel demoralized, the negative assumptions about gaming that rolled into the 2010s had real-life impacts. In 2008, a report from the Pew Research Center found that while nine out of 10 children played video games, only three out of 10 parents “sometimes” played with them. The report also concluded that nearly half of parents “always” or “sometimes” stopped their children from playing video games, again suggesting a widespread distrust of gaming and its impacts on kids in particular.

Times are changing, though — and quickly. In 2019, the Entertainment Software Association estimated that some 164 million adults play video games. In 2014, we saw headlines like “Little by Little, Violent Video Games Make Us More Aggressive.” Now, we see headlines like “17 Awesome Video Games to Play With Your Kids” and “The Argument for Playing Video Games With Our Kids.” There are even grandparents playing Fortnite in retirement homes.

In a 1987 Chicago Tribune article, an arcade owner said, “A lot of people are very narrow-minded and they feel that game rooms are where punks go.” Today, Reyan Ali, author of the book NBA Jam, tells me, “You now have the explosion of arcade bars, where adults go to relive childhood joys in 21-and-over environments. The one near me lets kids come in on Sundays. The kids now need special permission to enter the adults’ space, and instead of the adults keeping their kids from video games, they want to enjoy them together.”

Perhaps even more telling of the shift in opinion toward gaming, esports has exploded in popularity over the last few years. “I was totally unaware that anyone took competitive gaming seriously until I started shooting,” says Adam Cornelius, director of Ecstasy of Order: The Tetris Masters. “Since we shot the film in 2010, Twitch happened, and now we have a whole Classic Tetris league with thousands of fans. So, esports really took off at some point in the 2010s, whereas when I started the project in 2009, some people would just laugh, like I was making a film about the best Chutes and Ladders player or something. Now we have our own specials on ESPN2.”

Interestingly enough, as our combined feelings toward gaming have changed for the better, so has the “Are Ya Winning, Son?” meme. In 2020, the meme has experienced a resurgence of especially wholesome variations, featuring a healthy, happy boy and a more engaged father. 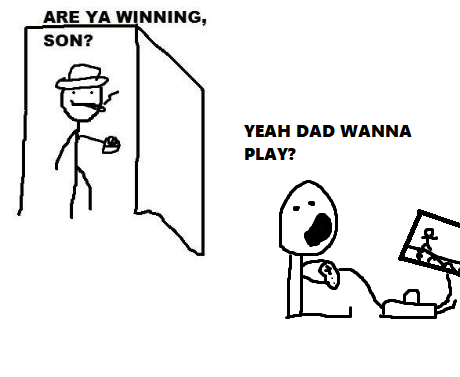 And just recently, “Are Ya Winning, Dad?” memes have spread depicting the father as the gamer. Playing games as a family is good for everyone, after all: As the same Pew Research Center report explains, “Media research suggests that when they participate in a media form with their children, parents are able to impart their values and beliefs about the acts and messages within the media form. This holds for watching television programs as well as for playing video games. Parents who play video games with their children can explain and contextualize the violent or negative messages that children might pick up from playing certain games.” 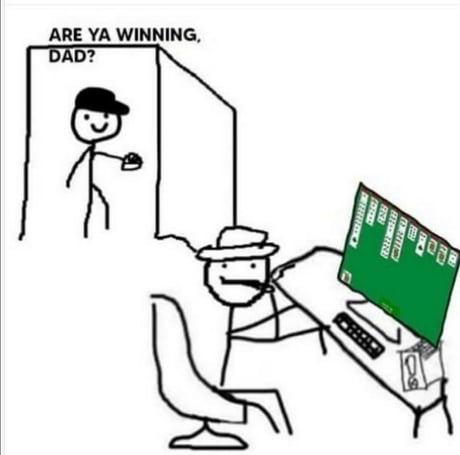 We certainly still have a long way to go in our understanding of gamers and the respect we give them. In 2019, for example, Trump once again blamed video games for mass shootings. But when the gamer is Dad, that’s a pretty considerable step on the journey.