Are They Starving the Michelin Man? An Investigation

The French tire maker wants a slimmer mascot, but it comes at a terrible cost

Brands these days know the value of appearing socially conscious. They use the hashtag #BlackLivesMatter. They slap rainbows on everything for LGBTQ pride month. And they talk a big game about body positivity, using plus-size models even when they don’t make products for plus-size people. In the advertising content, at least, one no longer needs to be skinny.

So why, as MEL contributor Nicholas Greyson Ward observed on Twitter, is the Michelin Man — a mascot you probably remember as quite plump — so thin now? Should we be concerned?

Almost every history of the Michelin Man (whose real name we’ll get to in a minute) confirms that in the late aughts, the French tire manufacturer that uses his likeness decided he should lose some weight. When the character returned to British TV commercials in 2007 after an extended absence, he was noticeably leaner, and made of fewer tires overall. “We have slimmed him down because it is a way of keeping up with changes in society,” Thierry Rudloff, then Michelin’s head of U.K. marketing, said at the time. “He demonstrates the evolution of society but also the evolution of the brand and the world we live in.”

This change, we should note, came a decade after a 1998 remodel for his 100th birthday, the first time he showed off what could be called a trim physique. For comparison, he was reliably chubby in the 1970s and 1980s. By 2009, the company had turned him into a superhero made of pure rubber muscle. 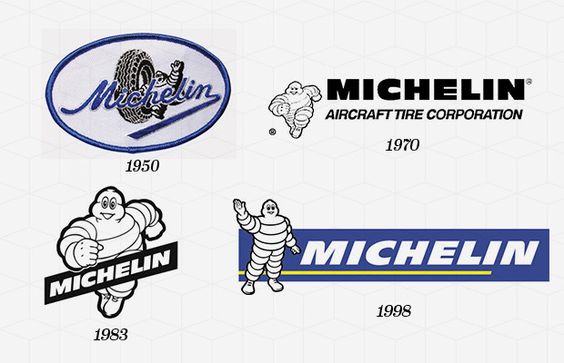 Dumping the hefty version of your spokestoon because consumers are increasingly drawn by the vague aura of “healthy living” would be a great betrayal under any circumstances, but it’s especially cruel to the Michelin Man, whose mass formerly exuded a jolly good humor, like Santa Claus. Moreover, his origins are distinctly related to appetite; girth is part of his appeal. The cartoonist Marius Rossillon, who painted posters under the name O’Galop, in 1898 created the first Michelin Man design, supposedly adapting it from a rejected pitch for a brewery ad in which a king raised a toast, saying “Nunc est bibendum” (Latin for “Now it is time to drink”). In the Michelin version, the portly fellow was made of tires, his chalice full of nails and glass likely to give a motorist a flat if they happened to be driving on an inferior product. “The Michelin tyre drinks up obstacles!” the bottom text proclaims. Soon “Bibendum” became his official name. 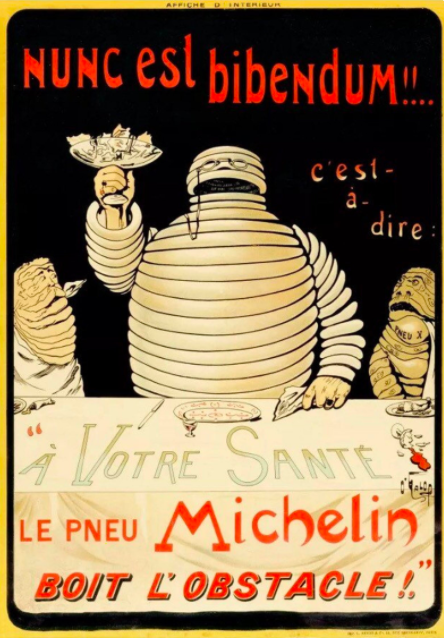 From his full belly, knowledge of Latin and elegant pince-nez eyeglasses, it’s clear that Bibendum is made to resemble a man of wealth and taste. This had everything to do with the economics of automobiles at the turn of the 20th century — cars were an upper-class convenience, and so, the premium Michelin tires were marketed as a luxury item. Bibendum, besides drinking, could often be seen smoking a large cigar to convey his status, and while an early cartoon confirms how he first inflated himself with air, it also reminds us that he has a substantial inner cavity (or stomach, if you will) to receive food and drink.

This reading is reinforced by the famous Michelin Guides to hotels and restaurants, which the company’s co-founding brothers, Édouard and André Michelin, conceived as a way of encouraging car ownership and travel in France. Michelin stars are now synonymous with the very best in dining, and Bibendum has graced many editions of the guide. We are left to conclude that he was partaking of the establishments that he recommended, thereby packing on the pounds. 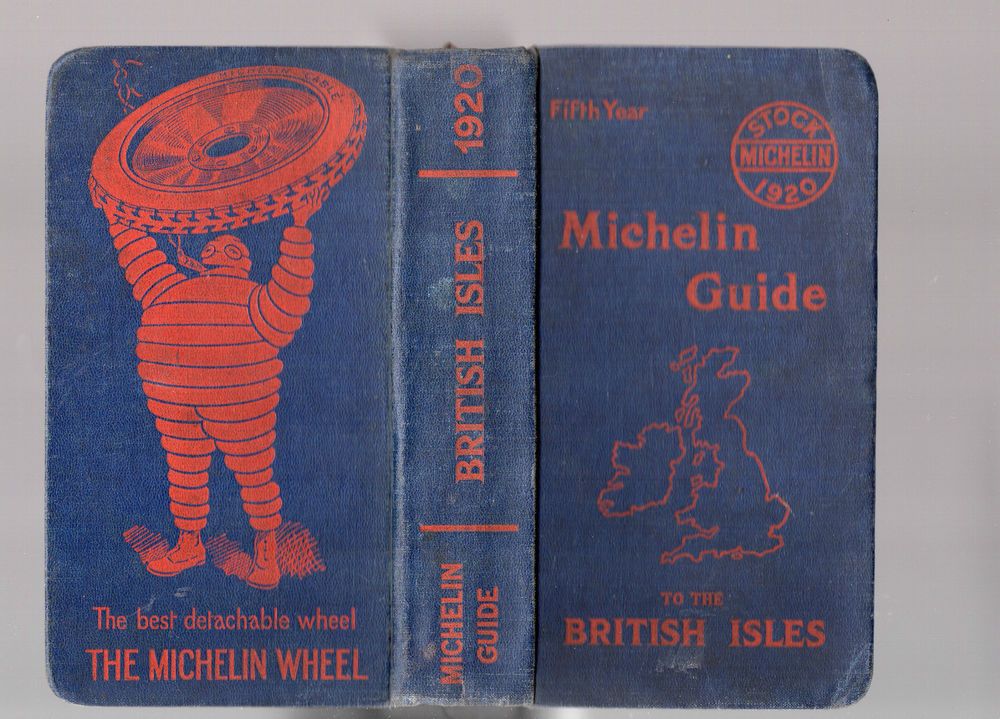 Here’s where it gets weird. If you check out the separate social accounts for the main Michelin brand versus the Michelin Guide, you can see that the mascot avatars are rather distinct. The first seems to be the now-familiar “athletic” version of Bibendum, and it reveals little of his body. The MG version, meanwhile, features him licking his “lips” and exposing the top of a beefier torso. He also talks about carb-loading, triple-layer chocolate cake and having a permanent “winter bod.”

Intuitively, this feels like the real Bibendum — a swollen creature of hunger and decadence — while the sportsman Bibendum represents an unattainable ideal, as when an actor uses dangerous dehydration techniques to look super-shredded for a Marvel movie. The evidence suggests that Bibendum has intermittently starved himself to meet the increasingly vicious demands of his tire-hawking masters, who want to hide, downplay or cut out his natural heft. 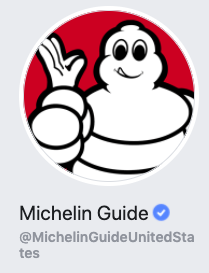 A Michelin Man who fucks like a beast is, of course, a Michelin Man who eats voraciously, gaining outsize dimensions. For a company forcing him to diet, this was an unacceptable implication.

But we know the facts. Bibendum is fat, and he’s better that way. Nobody needs an animated automotive pitchman to be in shape — to the contrary, his puffy midsection instills the satisfaction of meeting the recommended tire pressure. Allow him to let it all out, and quit shaming him into something he’s not. I promise he can still run around and fight villainous gas pumps or whatever. Everyone’s sick of performative fitness; just give us the big guy. Until then: Boycott.