When Did Steak Knives Become Such a Racket?

Thanks to our ignorance about different kinds of metals, pretty much from the start

With prices ranging from $20 to more than $500, there’s got to be something fishy going on with steak knives, right? I mean, they kind of all look the same — they’re all pointy, they all cut shit — so why the huge range? They’re also frequently featured on infomercials, which is definitely suspect. Then there’s their jokey pop culture presence in movies like Scrooged — where Bill Murray gives his girlfriend a set of steak knives — and Glengarry Glen Ross, where a young Alec Baldwin announces a sales competition where, “First prize is a Cadillac Eldorado. Second prize is a set of steak knives. Third prize is you’re fired.”

Okay, I get it, steak knives are a joke, but they’re also just a normal, useful household item. So why are they such a joke?

To find an answer, it makes sense to dive into the history of steak knives, which are surprisingly not that old. According to a detailed history at Popular Mechanics, pointy knives were a thing at the table up until the mid-1600s, when French clergyman Cardinal Richelieu got tired of seeing everyone picking their teeth at the table. Thus, he had all of his knives blunted and the trend took hold in many Western cultures. For the next 300 years, the only knives at a typical table setting were blunt-ended knives, kind of like butter knives. But sometimes that didn’t cut it — literally — so people would also make use of their personal knives, which were typically carried with them and used for all kinds of stuff, including cutting food at the table.

After World War II, though, things began to change. In 1946, a Maryland machinist named Paul C. Culver made a nice letter opener and gifted it to Charles D. Briddell Jr., his businessman buddy. Briddell’s family was involved in making cutlery, and when Charles’ brother Tom saw the knife, he thought it would make a good item to use at the dinner table. Tom then hired Culver to make a set of six knives along with a case, and surveyed a potential market. Turns out, people were all for it, so the original steak knife — the Carvel Hall — soon began selling nationwide. 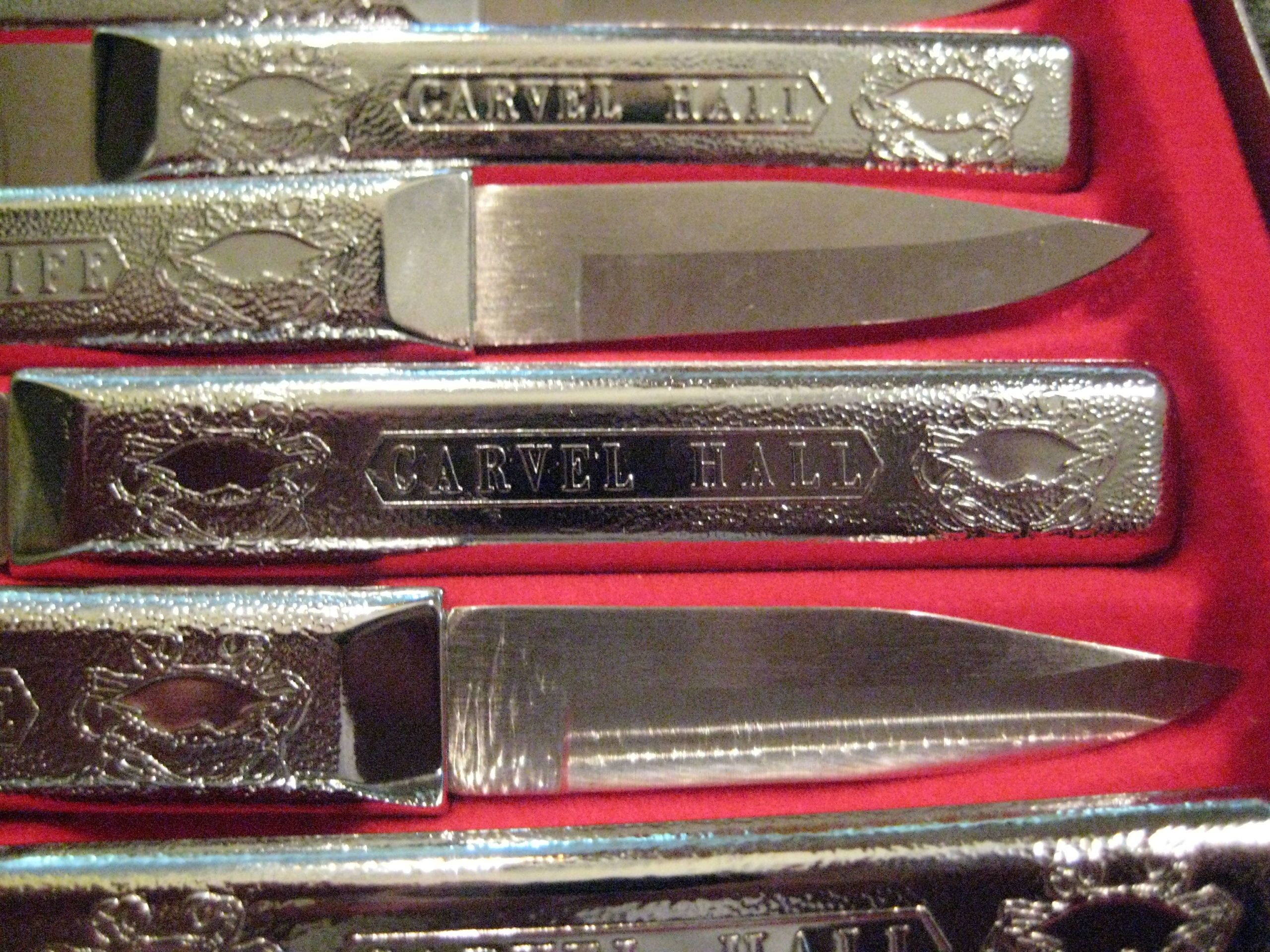 Just as that first letter opener was a gift, steak knives almost immediately began to be given as presents. In a 1950 ad in The Honolulu Advertiser, steak knives were being recommended as a gift for weddings and for Father’s Day. By the 1970s, the wooden blocks used to store knives had begun catching on, which would further add to their attractiveness as a gift.

In that 1950 ad in The Honolulu Advertiser, the set of steak knives were selling for $43.50, which, accounting for inflation, would be more than $450 today, meaning they were a pretty damn nice gift. Over time, though, cheaper steak knives utilizing softer metals began to be developed, which led to a need for serrations. As “The Knife Wizard” Harry Rosenblum explains to me, serrations make it so that a blade will stay sharp and so that lesser metals can cut through a piece of meat. Some people may not care, but serrations provide a rougher cut; whereas a good, sharp straight edge will give you a cleaner cut, helping to retain flavor and juices. Even to this day, Rosenblum explains that serrations are still a telltale sign of a cheap steak knife as, generally speaking, the only real reason to use a knife with serrations is for cutting bread (which, being soft, requires sawing).

Growing up, all my knives had wooden handles and serrated blades, and I never really knew the difference. My knowledge grew a bit when I learned how to butcher meat in a deli — where the only serrated blade was for cutting bread — but even now, I wouldn’t be able to tell a good knife from a cheap one. The difference, Rosenblum explains, is in the alloy used: This is why steak knives have such vast differences in price, because some metals are cheap as fuck — all you need to do is add serrations and they can cut anything — while others are extremely expensive.

Now, at both ends of that spectrum, you’re pretty much getting your money’s worth. A $20 set of knives are going to be made of crappy material, but, because you’re sawing with them, they’ll get the job done. At the other end, Rosenblum works for a company called Kikuichi that sells a set of four knives for $550. That’s a lot of money, to be sure, but those knives are handcrafted and made of a high quality metal, which, to those with the means, is worth it due to the craftsmanship and their ability to make a finer cut.

But then there’s the middle range of steak knives — those sets that go from $80 to around $300 or so — and this is where the potential trickery comes into play. Because most people can’t distinguish one metal from another, a company’s $100 set of knives might be virtually the same as their $250 set, with the latter just having a fancier block and nicer-looking handles. Rosenblum goes on to explain that, being that steak knives are usually gift items, they come at a perfect price point for this kind of grift because people usually judge them by their cost and nothing else. If you’re trying to show your friends that you give a shit about them, you don’t choose the $40 set of measuring cups for their wedding registry, you get the $200 knife set because it makes you look better. Meanwhile, whatever metal you’ve just bought is absolutely irrelevant.

How can you know if you’re getting your money’s worth?

It’s tough, but Rosenblum says you’re unlikely to find help at your local Bed Bath & Beyond. Instead, he says to visit a local place that sells kitchenware and has the time and expertise to explain to you what you’re getting. Aside from that, again, serrations are usually a telltale sign of a shitty steak knife, as are ones that simply say “stainless steel” and nothing else. Stainless steel isn’t bad, mind you, but Rosenblum warns that, “You should be able to find out the alloy of really good metal, which is often on the blade itself or on the packaging.” If you can’t find out the alloy, that’s a red flag that likely says it’s not very good.

The difference between good alloys and not-so-good alloys is extremely technical, not only because there are thousands of kinds of steel, but also because people have all sorts of opinions about them. “There’s a ton of information out there, and everyone has an opinion about what the ‘best’ is and you can drive yourself crazy on Reddit knife forums where people are having arguments about this,” Rosenblum says.

In an attempt to simplify things though, much of it comes down to hardness and softness — softer metals need more sharpening but are more durable, whereas harder metals stay sharper but are more brittle. 440A, for example, is a lesser steel alloy that’s soft, and while hardness in metals can be adjusted to some extent, this alloy cannot be made all that hard, so it dulls quickly and requires a lot of sharpening. VG-10 is a very good steel alloy that can be made a lot harder and “has a very fine grain structure on a microscopic level, which allows it to take a fine edge similar to a razor,” Rosenblum explains.

What does all of that mean when you’re sitting down eating your steak?

Well, when knives are fresh out of the box, it’s not going to make much of a difference. Brand-new, straight-edge knives are likely going to be very sharp and cut your steak very well. Over time however, this will change and that lesser metal will grow dull pretty quickly and require regular sharpening. On the flip side, that harder, higher-end metal knife will still seem like the day you first opened it, assuming you haven’t chipped it due to handling it too roughly.

Although the public’s general ignorance of metallurgy is one of the main reasons why steak knives are such a popular rip-off, there’s another reason why they’ve been made into a punchline, and it all goes back to the release of the Ginsu Knife. Launching in 1978, the first ads for Ginsu knives were two-minute commercials usually featured in local television markets. As media historian Robert Thompson explains, “That first ad for the Ginsu knife was really primitive — even back then — but it was also really, really effective. It’s an exquisite example of efficient marketing poetry, from its made-up Japanese-sounding name to its use of all the legendary tropes like, ‘Wait, there’s more!’ and ‘How much would you pay for this?’ You’d have to be crazy not to pick up your phone and call them.”

At just $9.95 — or about $40 today — Ginsu knives weren’t quality knives. As Thompson explains, “Back then, a lot of families kept their knives awkwardly stuffed in a drawer beside their over silverware. Ginsu knives weren’t aimed at chefs or people with nice cutlery, they were aimed at the families with a drawer full of knives.” Ironically, at that price point, people were getting their money’s worth.

The Ginsu campaign was enormously successful, selling somewhere near three million sets between 1978 and 1984. Accordingly, the ads left a huge mark on popular culture, turning steak knives into a punchline in Glengarry Glen Ross and especially Scrooged, where the joke was that, because Bill Murray’s character was effectively raised by television, a set of infomercial steak knives would be all that would occur to him as a gift for his girlfriend. It was also parodied on Saturday Night Live, The Tonight Show and in the first Teenage Mutant Ninja Turtles movie. It was even referenced in Jerry Seinfeld’s act in the 1980s and 1990s.

Curiously, it was also referenced in an episode of The Sopranos, when Tony mentions that he has to “get the Ginsu” during dinner. What’s weird about this is not only how recent the reference is, but also the very idea that Tony Soprano — a man with a lot of disposable income — would own such a cheap, shitty knife. And, given the fact that he’s surely chopped up a few bodies in his day, you’d think he’d know a quality blade. On the other hand, perhaps this is just further proof that almost no one knows what they’re buying when they get knives, which is likely why they’ll continue to be a rip-off product for ages to come.