Are Americans Finally Ready to Buy Anatomically Correct Male Dolls for Their Kids?

The popular LOL Surprise! Dolls are just the latest in a decades-old fight to normalize doll penises

“Um, that’s a penis,” I said quietly to myself when my daughter disrobed her newly purchased LOL Surprise! Doll. The dick was tiny — barely three little bumps and a hole — but it most certainly was a dick. That much was undeniable.

It didn’t bother me, though I did have a passing fear that I’d have to have an unexpected conversation with my four-year-old. But, she didn’t even notice the doll’s miniature manhood before she put on another one of his glittery outfits.

Looking into this later, I’d found that this was something of a news item late last year, with puritanical parents voicing their outrage over these petite penises. “This is unacceptable…..,” one parent wrote on Facebook, with a photo of a tiny doll dick.

“They are trying to get them younger and younger,” raged another on Twitter,  although who “they” are was left up to interpretation.

A third parent expressed his anger over the lack of a warning on the label.

His complaint wasn’t technically valid, as male LOL Dolls do in fact say “anatomically correct boy doll” on the packaging. Still, the print is rather small — it’s hardly the bold-printed “WARNING: DOLL DICK INSIDE” that he was likely hoping for.

In other words, Larian says that we have penises, so the dolls should too. As for his claim that “anatomically correct dolls have been available for many years,” this is somewhat misleading: Only a few anatomically correct dolls have been available in mainstream American toy markets over the years, and whenever they do show up, a vocal group of puritans inevitably rises up to voice their outrage.

The first such doll was a European import, as anatomically correct dolls were, and continue to be, perfectly common in Europe. His name was “Petit Frere” and that proud little French boy arrived on our shores in 1967, where he encountered controversy before even entering stores. According to the The Rochester Democrat and Chronicle, Petit Frere was “so completely equipped with real-life details that a U.S. customs inspector was sent to investigate a complaint that an obscene doll was being imported into the States.” Petit Frere did eventually make it to toy stores, but he and his little French fry had but a short visit to America, as toy sellers later recalled that the toy “bombed” here in the U.S., putting the doll dick market to rest in the country until almost a decade later.

Then, in 1975, Mattel decided to break the mold by putting a penis on its “Baby Brother Tender Love” doll, being the first American company to do so. “We believe that the time is right and the consumer is ready for an anatomically correct baby boy doll,” Mattel President Ray Wagner said at the time. 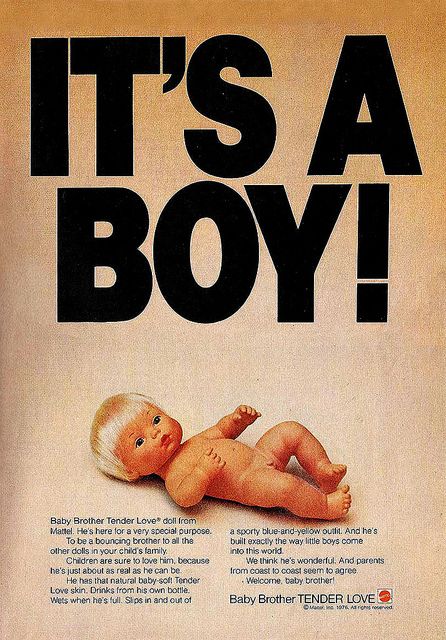 A year later, Ideal Toys followed suit when they made a doll of Joey Stivic, Archie Bunker’s grandson in All in the Family. Being no stranger to controversy, it seems the show was happy to enter into another debate in the culture wars by giving its doll the proper anatomy.

While angry parents voiced their disdain for these dolls, they didn’t succeed in their efforts to ban them. Still, neither would end up being on the shelves for that long. “As fascinated as kids are about anatomy, dolls with more play value would soon replace them,” explains Chris Bensch, vice president of collections at the Strong Museum of Play, home of the National Toy Hall of Fame. So while both these boy dolls could drink and pee, other dolls would come along who pooped and had electronics, and since the anatomically correct boys only sold moderately well, most new dolls didn’t bother with keeping things anatomically correct.

Meanwhile, in 1977, a very different kind of doll was created that proved to be even more controversial. Sold in packaging designed to look like a closet, the “Gay Bob” doll was created by former advertising executive Harvey Rosenberg, who explained at the time that he was hoping to “liberate” men from “traditional sexual roles.” Additionally, Gay Bob’s plastic pecker was put in deliberate contrast to the perpetually castrated Ken doll, whose smooth genitalia has been a subject of jokes since his first days on toy shelves. 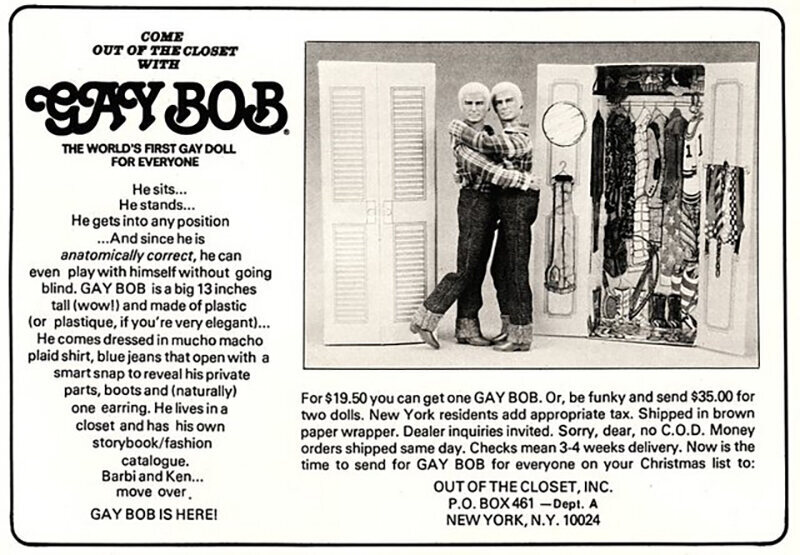 And here’s his dick pic: 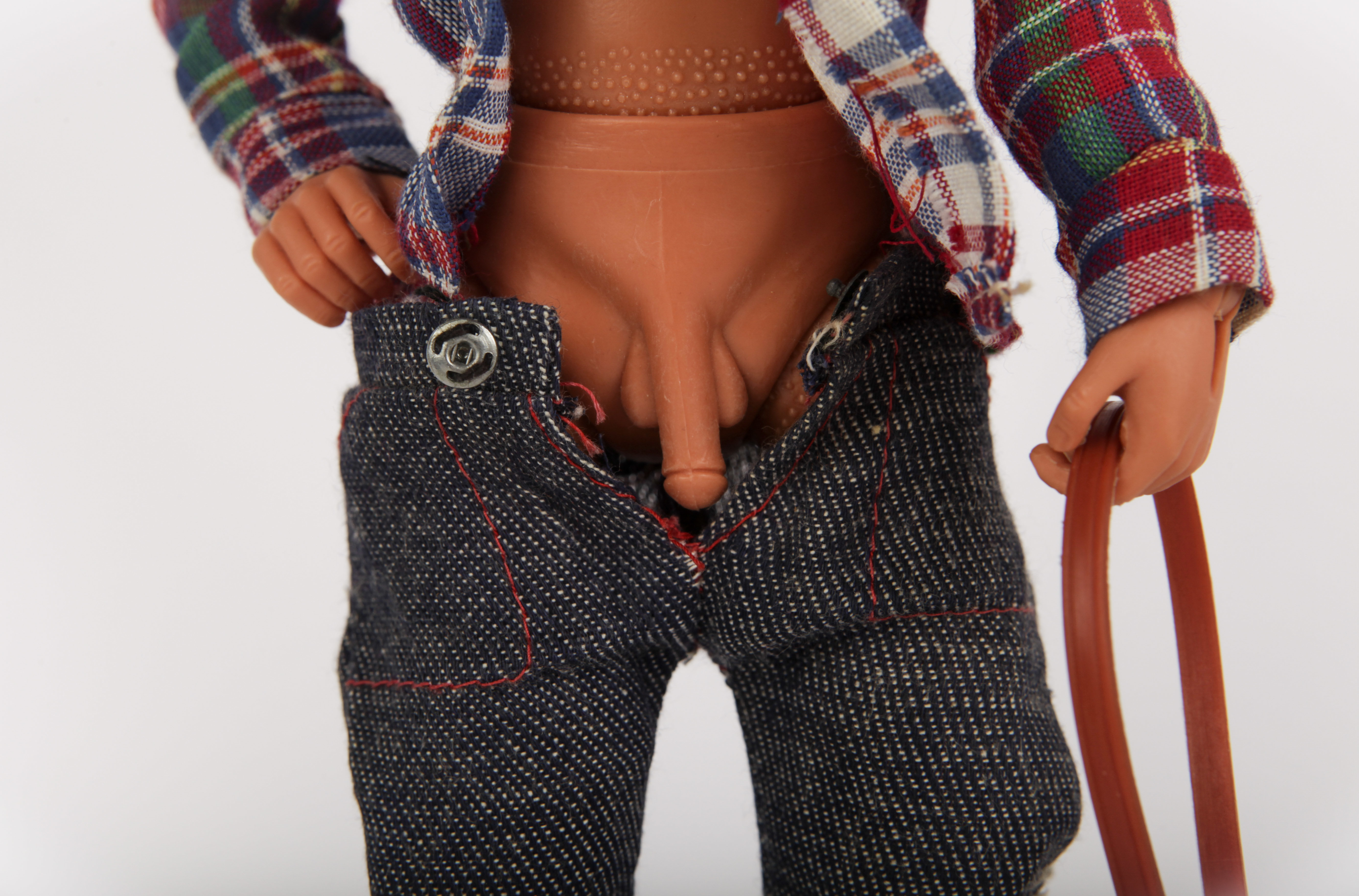 “Of course there was a controversy about Gay Bob,” says Chris “The Toy Guy” Byrne, author of Toy Time! From Hula Hoops to He-Man to Hungry Hungry Hippos: A Look Back at the Most- Beloved Toys of Decades Past. “There’s always some outrage with things like this, with parents screaming, ‘Think about the children!’ Of course, children will probably learn far more from their parents’ reaction to these kinds of things than they would from some inert piece of plastic.”

Despite the controversy, parents weren’t exactly spotting Gay Bob’s open fly on the shelves of their local Toys “R” Us. As toy industry veteran Klim Kozinevich — who worked for the maker of Gay Bob — explains, “There’s no regulatory body or anything like that when it comes to toys. Instead, it’s up to the buyers what ends up on their shelves,” and Gay Bob was really only sold in specialty shops and via mail order, as mainstream toy sellers had no interest in the product.

Despite Rosenberg’s claims that the product was a semi-serious attempt to be inclusive, Byrne explains that Gay Bob ended up being more of a joke product than anything else. The same could be said of 1997’s similar “Billy” doll, which featured a lot more gay stereotypes and a lot more going on in his pants.

In the 1980s, anatomically correct dolls would end up being a news item once again, but this time for a totally different reason. Created by Anakeja Industries, anatomically correct rag dolls began to be sold to to police departments to help in cases of sexual assault against children and those with disabilities. While the “show me on the doll” trope would become something of a joke later, it proved to be a tremendously valuable tool for law enforcement.

They have yet, though, to become a fixture on American toy shelves. While angry parents failed to ban Joey Stivic and Baby Brother Tender Love back in the 1970s, Bensch explains that dolls like these would only show up “intermittently” on toy shelves, and never for all that long. While parents are partially to blame — as they’re the ones buying (or rather, not buying) the toys — Bensch says that part of the reason these dolls haven’t been successful is also due to the kids playing with them. “Baby dolls are primarily marketed to girls, who generally want to play with dolls of girls and they only play with them for a couple of years, usually.”

If kids do want a boy doll, it’s up to the parents to decide which ones they buy — dick or dickless. All in all, that’s a lot of barriers for these dolls to contend with, which is why they’re still so rare. In fact, a recent example of plastic penis outrage occurred in 2014, when Toys “R” Us caught some heat for selling baby boy dolls with penises. Despite it being 40 years later, the reaction to the doll was indistinguishable from the reactions to Baby Brother Tender Love, which shows that we’re really no closer to this becoming normal.

So, despite Larian’s claim, anatomically correct dolls haven’t become commonplace here in America. I even verified this myself by going to my local Walmart and Target to closely inspect every baby boy doll they had on the shelves (while also trying to avoid suspicion from the employees at each). Unsurprisingly, I found very few boy dolls at either store and none had a penis. Perhaps if my dearly departed Toys “R” Us still existed, maybe there would have been one there, but those days are long gone, and with limited space on department store toy shelves, it’s unlikely that they’re easy to find anywhere except online.

Which leaves LOL Surprise! Dolls as the sole defenders of doll dicks on mainstream toy shelves today. Perhaps now — given their immense popularity, and Larian’s vow that their dicks are there to stay — things will finally change, and basic anatomy will no longer be taboo.

Fight on, little dicks — you have nothing to be ashamed of.