Why Is the Right Obsessed With Amy Cooper’s Dog?

Any time a white person has a documented meltdown that leads to calling the police on a person of color, they will have defenders. Some are other white people who can only conceive of cops as rational, unbiased protectors — and fail to understand the deadly threat they often pose to black men, for example. Some are right-wing grifters who fetishize a brutal form of “law and order,” up to and including extrajudicial killings. And some are flat-out racists, in favor of exercising any authoritarian power over nonwhites.

But even this crowd can make an exception, and it’s weird to see where they draw the line. Apparently, pet owner etiquette is an important factor.

A viral video of a white woman named Amy Cooper calling 911 on a black bird-watcher named Christian Cooper (no relation) in Central Park after he asked her to leash her dog has sparked overwhelming condemnation — nothing unusual there. However, because the incident began with an off-leash dog, and the footage shows Amy Cooper appearing to choke the cocker spaniel as she holds him by the collar, some ordinarily inclined to cheer on the over-policing of minorities have expressed a higher loyalty to the rules of public parks. It’s Amy at fault here, the leash bros say, because she couldn’t control her dog.

For many viewers, Amy’s chilling promise to dial 911 and tell emergency operators “there’s an African-American man threatening my life” after Christian enticed her loose dog with a treat is what deserves focus here. She wanted to bring the NYPD down on him out of spite, an act of revenge that could have escalated into violence. She intended to fully weaponize her status as a white woman to put a black man in his place. Some, however, are able to sympathize with this impulse — while criticizing Cooper’s strategy. 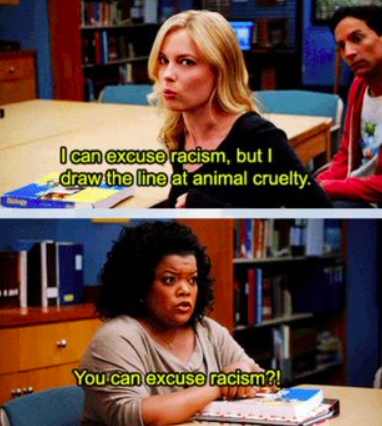 “I just feel sorry for the dog!” is emerging as a popular sentiment that lets her off the hook for the reckless, dangerous false report and foregrounds the mistreatment of an animal. “She could have just leashed the dog” is a valid, sensible reply to this story that nonetheless dodges the crux of it: her default to racialized harm.

Indeed, Amy Cooper could have obeyed park regulations, except the very same entitlement that had her quickly setting up a bogus arrest (or worse) is a natural basis for ignoring these simple codes of conduct in the first place. It’s hard to imagine Amy Cooper apologizing, leashing the dog and walking away to indulge racist thoughts in private, since we were introduced to her as someone eager to enact a fantasy of oppressive control and personal privilege.

In fact, when you investigate how much more some people care about dog manners than the ills of systemic bigotry, things get weird fast.

On 4chan’s /pol/, which hosts “politically incorrect” discussion of current events, the forum’s sexism and racism are at odds. A handful of users think Amy Cooper was justified in calling the police. Others have disparaged her with misogynist and anti-Semitic slurs, or lamented that Christian Cooper didn’t assault her. A third group, meanwhile, is totally fixated on the leash issue.

One commenter wrote, “Fuck that bitch. She was walking with her dog off leash in a public park where dogs have to be leashed. I see this all the time at my local parks.” Here’s somebody suggesting white culture is too advanced to forgo leashes: “I wouldn’t want my dog to run off and hurt someone or another animal or get ran over. Historically in white societies we have learned to be considerate of others and follow basic laws that prevent unnecessary problems with our fellow citizens but I guess there are always outliers like you. It’s a shame.”

“Holy shit has anyone ever been through a high jogger hood?” one poster asks — “jogger” being the new 4chan slur for black people, established after the killing of Ahmaud Arbery, an unarmed black jogger, in Brunswick, Georgia — “they don’t believe in leashes because of slavery or some shit.”

This is appalling, yet it’s the reply that’s truly unhinged: “N*****s  breaking rules doesn’t make it OK for everyone else to break rules you stupid f****t. Get angry at those n*****s then. That’s not a reason to approve what this bitch did.”

Then you have the commenter equally disgusted by nonwhites and anyone who refuses to leash: “I hate n*****s and people who don’t leash their dogs so I hate both of these people. It’s expected n*****s will n*g out but I hate people who think their dog won’t hurt anyone so they unleash it. Fuck them both.”

There’s even someone acknowledging police racism as they advocate for leashes and drop the N-word: “She was literally trying to bait the cops into shooting this dude because he asked her to keep her dog on a leash. I don’t like n*****s, but this bitch is in the wrong any way you slice it.”

Amazingly, when your ideology is built on the dehumanization of everyone besides a narrow subset of reactionary white men, you free yourself up to get lost in digressive detail. The fringe right cannot pretend to care about the human rights and dignity of either Christian or Amy Cooper — ideally, in their view, both would suffer — so that leaves litigation of dog decorum.

As Cooper has lost her job and surrendered her pet to the rescue where she adopted him, there is likewise ongoing debate as to whether these punishments fit her behavior. Whatever the value of these conversations, they typically don’t address the dynamic of terror that Amy Cooper set in motion when she opted to turn a minor disagreement into a police matter. Observers with their own prejudices are happier, of course, to shame her for the technical infraction of an unleashed animal than for perpetuating an unjust hierarchy that benefits them, too.

Had Cooper chosen a different battle, she might be enjoying better support today. A good number of her would-be allies are saying, in essence, that she should have been smarter, not less racist. And while it’s obvious the whole fracas was avoidable by way of initial common courtesy, what really matters is how Cooper responded to a corrective from a black man. A few always argue that a person shouldn’t be dragged through the mud for a single mistake, though critically, she made two — one in assuming she was exempt from the law, and a second in trusting it to cleanly fulfill her cruelest whim as though she weren’t involved at all.

Had she managed to learn from the first, we wouldn’t currently know the extent of her knee-jerk racism. But it would’ve festered anyway.