As more and more pop stars rely on beats and samples instead of guitars, what happens to the dying breed of imaginary six-string warriors?

Eric “Mean” Melin, Air Guitar World Champion, has been strumming make-believe strings for as long as he can remember. His earliest memory is set at a small family home in Eden Prairie, Minnesota, where he and his cousins donned KISS masks that they made with crayons and paper, assembled a luminous KISS logo on a Lite-Brite, wielded tennis rackets as guitars and played along to “Rhinestone Cowboy” by Glen Campbell for the enjoyment of their parents. 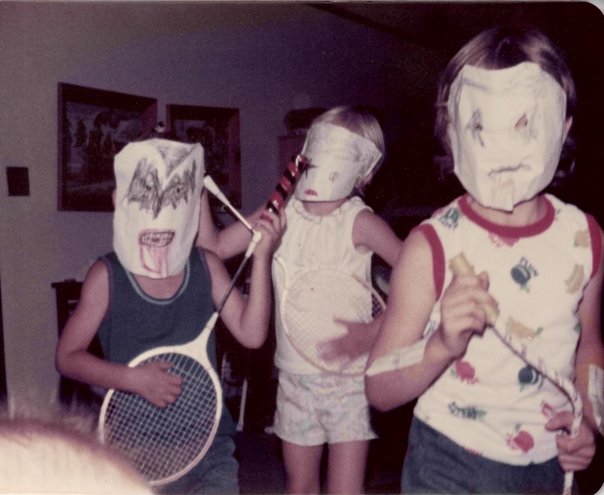 “Then, in high school, when I got into metal, I really embraced air guitar as an alternative form of dancing,” Melin explains. “I’ve never really been comfortable expressing myself in dance. I’ve even taken dance classes now that I’m an adult, and I’m terrible. I don’t know what’s wrong. I have a natural sense of rhythm, but it seems to always express itself with my left hand on a fake fretboard and my right hand fake strumming.”

“I’ve always been the guy who has zero shame about being in a public place where nobody else is rocking out, and I’m fucking rocking out,” Melin continues. “Playing air guitar is just an extension of that.” It was only natural, then, for Melin to join the competition circuit after seeing the 2006 rockumentary, Air Guitar Nation, which tracks the air guitar world championship, located in Oulu, Finland, since its conception in 1996, and follows Americans who are trying to rock their way there.

Another air guitarist tells me that she was inspired by this film, too. “Having seen the film Air Guitar Nation and after watching just one competition in Chicago in 2009, I was happy to drive up to Milwaukee in 2010 with friends as moral support for my brother — stage name Hand Solo — and husband, VanDammage, who were competing for the first time,” says competitive air guitarist Nicole “Mom Jeans Jeanie” Sevcik. “After round one, I was pulled up on stage as a walk-on competitor and ended up placing third overall. I was hooked. It was so much fun that I’ve signed up every year since.”

But while fun, competitive air guitar is much more serious and challenging than you may think. “I thought I could just get up there, make up some shit on the spot and beat everybody, because I’d been doing this forever,” says Melin. “Then, I realized that air guitar is a highly choreographed mode of silent storytelling. Competitive air guitar goes way beyond normal air guitar. You have to have a three-act structure in one minute, tell a story and do all this crazy shit.”

Air guitars, Melin explains, are only limited by your imagination, which means being technically good can only get you so far. “The people who stand there and recreate what Jimmy Page was playing in ‘Heartbreaker,’ while it’s impressive to see their fingers move on the fretboard and match up with the music, it’s not very exciting,” he says. “If you’re not moving your ass and banging your head and accentuating other parts of the song as well, you’re not visually bringing it to life.”

To achieve such enthusiastic perfection, Melin spends the off-season analyzing songs, practicing in front of mirrors and reviewing film of himself and his choreography — all with the help of his air guitar coach, Peter “Stiff” Dickens. And in 2013, it all paid off, but only after a strike of good luck. “I lost by a tenth of a point at the U.S. Air Guitar Championship in 2013,” Melin explains. “But the guy who beat me was one of my best friends in the air guitar community — this guy from San Diego named Lieutenant Facemelter. I was crushed that I wasn’t going to Finland to the world championships to represent the U.S. Then Facemelter took me aside and said, ‘I was hoping to win this year, but I didn’t know if I would or not, so I booked a plane ticket to Finland already and a spot at the Dark Horse competition,’ which is this thing that happens the night before the world championship, where if you didn’t win your country, you can compete again. And if you win that, you get to go on the world stage anyway. It’s kind of like a second chance.”

“I went to work on Monday, told my boss I was taking the rest of the week off, flew to Finland on Tuesday, arrived on Wednesday, won the Dark Horse on Thursday, and then on Friday, I won the whole thing,” Melin continues. “It was crazy, and it’s all because the guy who had the most to lose helped me get there.”

That year, Melin performed to a song he wrote himself, with some help from Stiff Dickens — song choice, of course, is incredibly important in competitive air guitar. “More than anything, dynamics make a good air guitar song,” Melin says. “You have to get people into the groove, then you can introduce the solo, and then the ending has to be huge. Anyone who ends with a fade, they’re not doing it right.”

Songs that have a lot of guitar are natural choices. “Personally I have a love for using Dio and Metallica,” says Sevcik. “If the song makes your fingers and body move when you hear it, it’s the one.”

But nowadays, as pop music becomes more and more electronic, hip-hop pushes rock music aside and we stray ever further from the wailing guitars of the 1970s, where does that leave air guitarists? And might air guitar soon become a lost art, without much guitar music in the mainstream to inspire?

To answer this, we first need to look at how air guitar began. Our very own music nut Mike Rampton, who also writes for the rock and metal music magazine Kerrang!, tells me that the first time he ever saw someone play an air guitar was in the Bill & Ted movies, during the late 1980s and early 1990s. But Rampton suspects that 1970s power riffs were what laid a nice foundation for air guitar. “I’d totally bet Deep Purple’s ‘Smoke On The Water’ riff was one of the first air guitar songs,” he says. “Or ‘Iron Man’ by Black Sabbath. Both are big, fuck-off riffs that you can do big, silly pretending to.”

All in all, Rampton suggests that air guitar is more a kind of theatrical venture than a musical one, combining maybe some powerful riffs from the 1970s with the glam and irony of the 1980s.

Dave Fawbert, who runs a power ballad night called Ultimate Power, which features far more air guitar and impassioned fist-clenching than just about any other kind of dancing, more or less agrees. “I’d imagine the history of the air guitar mirrors the history of the guitar hero and the riff, so Led Zeppelin and Queen must have kicked it off,” he says. “Power ballads are the songs that made room for huge solos, and they’re the ones that pack the most emotional punch. Of course, the air guitar is our human way of replicating and responding to that emotion, regardless of whether we actually bloody play the guitar or not — everyone can be a star on the air guitar.”

Knowing all of that, you might be inclined to think, as the public view strays further and further away from these guitar-based ballads, that people will put their air guitars down for good. But Melin begs to differ. “What’s really cool is that, because of the ease of use of new audio editing software, what people do now is they’ll put songs together, like new hip-hop and pop songs, and edit them into something else that’s more guitar based,” he explains. “People will put air guitar into a song that you think has no business being performed that way.”

And there’s nothing stopping them. “You can break the unreality of air guitar to also accentuate the drums, or the keyboard or something else in the song that’s happening,” Melin says. “Our instrument has no limits, no bounds.”

That’s not to say that air guitarists wouldn’t welcome a return to the guitar though. “We as competitors get rather excited over new albums that have great guitar solos,” Sevcik says. But in the meantime, you can find them strumming their invisible strings and rocking out to just about anything — whether it has wailing guitar solos or not.