Adult-Onset Anxiety Is Messing With My Chi, So I Did Some Reiki to Unblock My Chakras

I might still be an anxious person, but I did get the best nap of my life

“Youth is wasted on the young.”

Yeah yeah, it’s super lame to start off with a quote — there’s probably even a rule in a manual somewhere that promises 10 lashes to any writer who does so — but that particular George Bernard Shaw quote is especially prescient. Prescient, considering this week’s adventure in cheating my way to a better life is all about anxiety, an emotion I rarely experienced as a snot-nosed dumb kid, but has since lived like the Babadook in the corners of my mind more or less every day since college.

It was in my college years, you see, that the realities of becoming an adult took over. Prior to heading off to school, I was under the watchful eyes of my parents, who carefully managed all of the “too real” parts of my existence: Food, clothing, tuition, etc. But in college, for the first time in my life, I was on my own — paying for school, paying for a roof over my head and scraping together what little cash I had left-over for boxes of mac ‘n’ cheese and cans of chili at Costco because they were the cheapest shit there. I was face-to-face with the fact that nothing in my life would be free or easy any longer.

So yeah, I’m a little bitter about being half-conscious, and thus, being unable to savor the only years of my life that were free and easy. And now that I’m an adult and I know who I am, I’m saddled with constant worries about money, my career and whether I’m keeping up with the Joneses or dreadfully, irreversibly behind.

Obviously, there are plenty of ways to address the anxiety that comes with being an adult: Through therapy, medication and even exercise. Or you can simply not address it, and keep kicking the worry-filled can down the road until, years later, it’s so bloated and toxic it bursts out of you like steamy radioactive waste, poisoning everything and everyone around you.

Guess which option I picked?

But now, being 35, less fit than I’d like to be (despite my best efforts), working a job that I love but hasn’t done me any favors in the “will you ever buy a house?” department, and until recently, neck-deep in the maddeningly shitty online-dating scene, I figured it was as good a time as any to address my can-o-worries.

Naturally, I chose to do so with some energy healing.

The Problem: My anxiety about life and getting older keep me up at night.

The Alleged Cure-All: Reiki, a form of alternative therapy that uses touch to channel and re-balance the “Universal Life Force,” i.e., the cosmic energy that flows through all living things, which I’m totally going to refer to as “the Force” from here on out.

Reiki in its current form was developed in 1922 by a man named Mikao Usui in Japan, and has been used since to help heal a range of psychological, spiritual and even physical ailments by passing the Force from the reiki practitioner to the patient through the “laying of hands” and bring the chakras into alignment.

Reiki practitioners channel the Force with the help of special crystals and stones, which are laid on the patient and will totally make you feel like New Age Spencer Pratt.

All in all, the entire process of re-balancing chakras can take up to two hours, which is plenty of time to meditate on your life and the choices that brought you to a reiki healer, or to get in a solid midday nap.

But Wait, What’s a Chakra?: Wondering where and what your chakras are, and what they do? This infographic explains them pretty well: 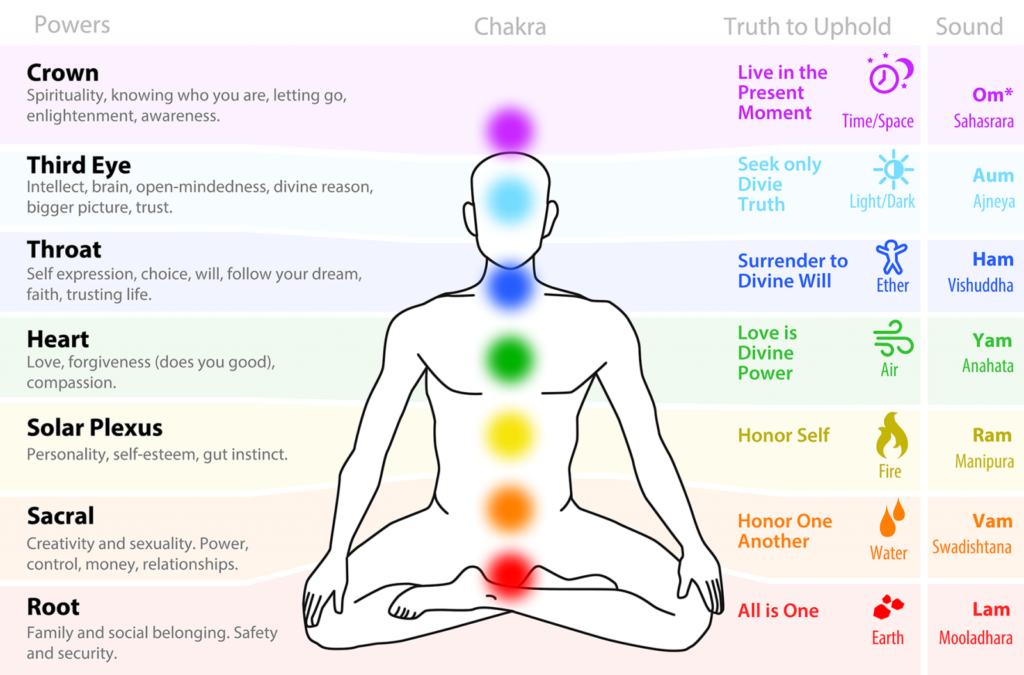 The Science: Yeah… about that. Unfortunately, the science behind reiki is spotty at best. You’ll find an equal number of critics claiming reiki is a pseudoscience — including the American Academy of Neurology — the efficacy of which cannot be measured with empirical evidence, and proponents who claim to have done just that via peer-reviewed studies.

Much of the research done on reiki has focused on the aforementioned Universal Life Force, which practitioners claim forms the basis for all the healing done through reiki, but which science has been unable to verify actually exists.

And yet, if you speak with healers and long-time reiki patients, they’ll tell you that the practice has a profound effect on the mind, body and spirit. So different strokes for different folks, I guess, or as they say in reiki’s homeland of Japan, “十人十色.”

The Experience: I showed up for my first reiki appointment at the home of my healer Marcia Hamelin not knowing anything about what I was about to experience other than what Marcia had told me on the phone, which was “you will definitely walk out feeling something, I guarantee it.” That sentiment alone made me excited, because I was trying to keep an open mind about a practice my extremely logical brain was telling me was bullshit, and because I was truly interested in addressing some of the anxiety bouncing around my head — even if I was addressing it with an unmeasurable energy force, instead of therapy or medication.

Inside Marcia’s living room was a comfortable-looking massage table, replete with a blanket and a pillow. After I removed my shoes and hopped up into a sitting position on the makeshift bed, she began by “clearing” the room and myself of any negative energy with burnt sage, waving the smoldering bundle around my body and making me smell great in the process.

Marcia next explained how reiki works and how the Force is channeled from her hands to my body in order to open any blocked chakras, the status of which was determined by holding a reiki pendulum near each and watching how it moved: If circular and fast, the chakra was open; if slow and straight, the chakra was blocked. Investigating my chakras, Marcia was able to determine that my Crown, Third Eye and Heart chakras were open; my Throat and Solar Plexus chakras needed some work; and my Sacral and Root chakras were blocked. All of which appeared to confirm the fact that I was an enlightened dude with a lot of love in his heart but who was dealing with some feelings of insecurity and a lack of professional agency. Sounds about right!

Now with my chakra statuses determined, an eye mask over my face and crystals laid out across different parts of my body, the hour-and-a-half long healing process began. Moving from my Crown down to my toes while I attempted to breath deeply and imagine different colors of energy filling my mind and body, Marcia placed her hands on each of my chakras for what seemed like five-to-ten minutes each. Blindfolded, I found myself drifting in and out of a sleepy, dream-like state, and catching myself beginning to snore more than a few times. 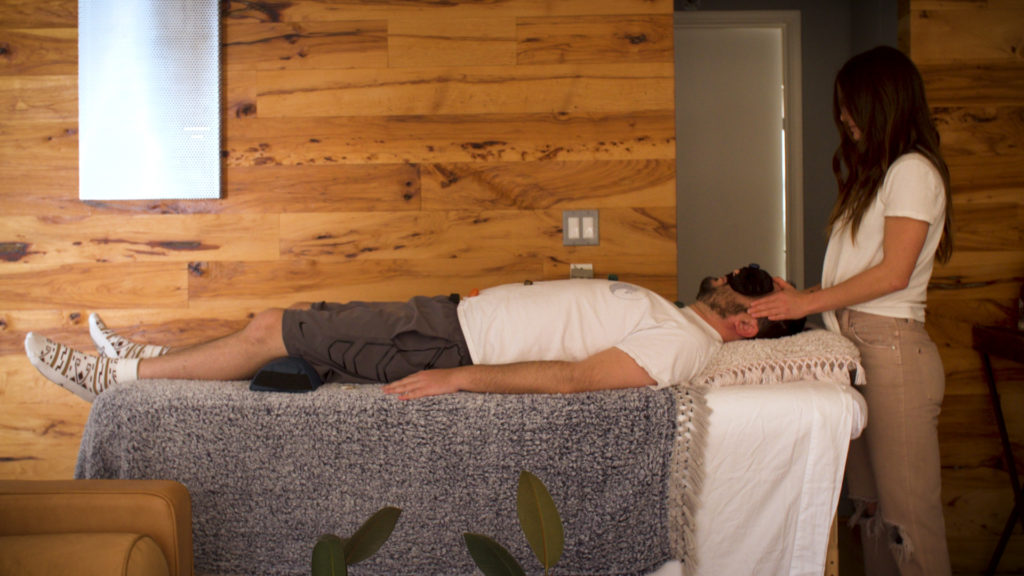 As I mentioned previously, while open-minded, it was hard for me not to go into this experience without a little bit of skepticism. But as Marcia touched each chakra and softly asked me to imagine the colored energy that corresponded with them, it was incredible to see those colors fill my field of vision in my darkened state. And even more interestingly, the colors were most vivid when she was touching the areas in which my chakras were open, and far less so where I was blocked. Placebo effect? I don’t know!

At the end of the session, with the rebalancing process complete, Marcia re-measured my chakras with her pendulum to determine whether we were successful or not. In my case, we were able to open up my Throat and Solar Plexus chakras completely, while my Sacral and Root chakras would require more work when I returned for my next session later in the week.

After coming to, paying and heading back to my office, Marcia sent me a follow-up email explaining what she had worked on, and tips for meditative home practice that promised to help me turn the gains we had made into long-term results.

The Takeaway: A day or two after each of my two sessions with her, Marcia texted me to ask whether I was feeling any changes in my anxiety levels since we had worked on opening my chakras and filled my body, mind and spirit with cosmic energy.

Sadly, the answer was no. A week on, the answer is still no. Anxiety — about life, about work, about money — is just something I deal with, and though I may wish I could go back to a time when I was younger where I didn’t have to worry for nothing, anxiety might simply be a fact of life all adults deal with to varying degrees.

That said, I’m not giving reiki a zero out of ten; while it might not have cured what ailed me, my reiki session was still an interesting one, and one that left me feeling extremely refreshed, physically — not unlike an A-plus nap, which is kind of what it was for me honestly — and ready to take on whatever the rest of the day threw at me.

Would I recommend it? That’s the tough question. The reiki experience is likely a personal one, and one that affects each person differently. Given its metaphysical and spiritual dimensions, you can’t compare it to, say, the Morning Recovery drink, which either prevents a hangover or doesn’t (it didn’t). You kind of need to experience reiki for yourself, and see what it does for you.

Still, at $100 a pop (for me), that money might be better spent getting neck-deep in your daddy issues over five sessions with a therapist than one, will-it-or-won’t-it session channeling an energy that science can’t prove exists.