Is ‘Yoink’ the Opposite of ‘Yeet’? An Investigation

Two nonsense words have formed a curious but compelling relationship

All physics students learn Newton’s third law of motion: For every action, there is an equal and opposite reaction. By the same token, it seems as though a term cannot come into existence without acquiring an antonym — in order to describe something, there must be an opposite quality, the shadow or reflection. Language is wondrously malleable, and it never stays the same for long, but even in rapid change it rebuilds an internal, often unspoken logic.

Pop culture and youth slang play a considerable role in generating these fluid systems of meaning, such that a couple of nonsense syllables borne out of jokes may, over time, prove to be useful and complementary terms, each one honed by the other. Even if you haven’t thought of it this way, you’ll note a stab of recognition at this hypothesis: “Yoink” is the opposite of “Yeet.” 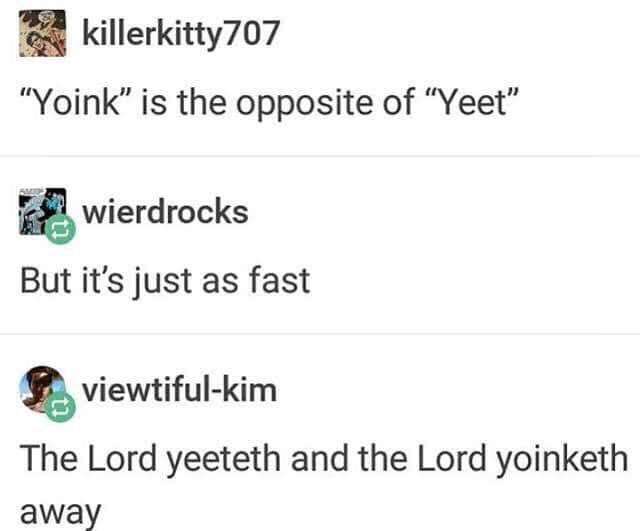 There’s a pleasing balance to the formulation. An economy of letters but a sharp divergence of sound. Both words carry an implied exclamation point, and neither would be immediately comprehensible to an English speaker in the mid-20th century. They are, in a manner of speaking, both memes. But does all this add up to a valid proof of their inverse definitions?

To answer that, we’ll first need to examine “yoink” and “yeet” in relative isolation. “Yoink” as we know it was established earlier, and with a more specific application — it entered public consciousness through The Simpsons, whose characters routinely deploy it in the act of snatching, grabbing or stealing an item, typically right out of someone else’s hands.

Although its roots are mysterious, “yoink” is the plausible synthesis of two antecedents. On the etymological side, its resemblance to “yank” can be no accident, and indeed it might be read as a goofy distortion of that verb. For their part, The Simpsons writers have alluded to an onomatopoeic origin in earlier cartoon franchises; “yoink” is the approximate transliteration of the sound cue for sudden theft in Hanna-Barbera series like Scooby-Doo (which also includes the interjection “zoinks”), and may have figured in Archie Comics as well. To yoink an object is simply to take it.

“Yeet” is at once an older and newer coinage, and by far the more confounding. In the Middle English spoken in the first half of the second millennium, “yeet” was a form of the verb “yeten,” which could refer to the choice to address someone by the formal “ye” instead of the casual “thou.” It’s safe to say that this usage is extinct. But “yeten,” like the 21st century “yeet,” was an incredibly versatile word — it might just as well mean “to overflow” or “to melt or dissolve.” Among its many alternative definitions, you also have “to send forth” and “to disperse or scatter.”

This gets us surprisingly close to a flipside for “yoink”: Instead of gathering in, you’re projecting out, expelling, launching. The current vogue for “yeet” is owed entirely to African-American Vernacular English, by way of a few iconic Vines. There’s one where a kid’s dance moves are encouraged by peers shouting “yeet,” and, critical to this discussion, another in which a girl is given a beverage can, declares “this bitch empty,” and yeets it into a crowded school hallway.

Really, this transitive exploitation of “yeet” — as in, “to throw or hurl with great force” — is but one facet of its variable nature. It’s a word that can mean anything and everything, depending on context, and this surely lent it greater value to teenagers who would prefer that their idioms remain inscrutable to adults. Stripped of any observable action, it’s a statement that conveys energy and hype.

All the same, that 2014 Vine and others like it have solidified “yeet” into a particular gesture. Urban Dictionary’s number one definition, “to discard an item at high velocity,” has about six times as many upvotes as the top generalist versions. It has also found a figurative utility: A depressed person will tweet “yeet me into the abyss,” while a pissed-off individual may voice a desire to “yeet [something] into the sun.” In this way, “yeet” has become the noise of ejection and refusal. If you yeet something hard enough, you won’t see it again.

This is where, after a long and sneaky convergence, “yoink” meets “yeet.” Not only do the verbs represent equal but polarized vectors, they are each to be spoken aloud at the moment you perform the motion. If you don’t say “yoink” when you yoink, or “yeet” when you yeet, have you actually done either? I would argue that you have not.

Speech is an act in itself, and these words are what imbue your physical movements with the exact intent that belongs to either — to brazenly filch something or emphatically rid yourself of it. Otherwise, this is basic taking and disposing. The caveat that complicates the antonym pairing is that while yoinking implies a transfer of ownership from a victim to the speaker, yeeting releases an article to no certain recipient, only the entropy of the universe. Naturally, that rule has its exceptions, too:

So can you safely assert that “yoink” and “yeet” are opposites?

The greater share of documented usage is convincing on that score, if not absolutely — because language doesn’t stand still, and always has wiggle room. It’s most accurate to say that the words have made a crossroads at our place in history, and will continue on paths altered by that exchange. This is how the tapestry of communication is woven. Perhaps the two terms will triangulate with a third that blends their cadences and effects. As long as we keep talking, anything could come out.