The Strange Sexual Politics of Words With Friends

Who are the guys flooding women’s Words With Friends DMs with pickup lines — and what do they really want?

On the Scrabble app Words With Friends, “sex” is an easy word to play in a pinch. The letter “X” is worth eight points, while “S” and “E” are common one-point fillers bound to show up on your tile rack. I see it used a lot: It’s an easy word with which to show off your advanced Scrabble technique and stack words flat on other words. Maybe it indicates a lack of creativity, or a less-than-prodigious vocabulary.

Or maybe the guys who play it are trying to tell me something.

We’re all driven by death, sex and a desire to look cool. On Words With Friends, it seems, lots of guys try to stroke their own egos and stroke one out at the same time.

‘Two to Three Requests a Day From All These Random Men’

Often, receiving random messages from challengers isn’t a big deal. They don’t interrupt the game and are easy to ignore. The ones I get tend to be odd but innocuous: “Thank you for accepting my game,” a random guy said as he began a round with me. “I’m Steve and I’m a police officer in Tennessee.” After I failed to respond, he resigned.

“I was getting two to three requests a day from all these random men,” says Marissa, 25, an elementary school teacher. “I accepted the first 10 or so, and then after we started the game, they would start a chat with me. Nothing too inappropriate, just like, ‘Good luck gorgeous’ or ‘How’s ur day,’ stuff like that.” She stopped responding, but kept playing. “I couldn’t get out of the game because it would count as a loss and I didn’t want to mess up my stats,” she says. “It’s lame, but true.” Some men who didn’t get a response quit the game or left her hanging. She no longer accepts most requests from strangers on the app.

Luckily, none of the lines guys tried on Marissa were too explicit, although some played words like “uncut,” she says. Maybe she and I are lucky. The Reddit forum r/CreepyPMs contains dozens of examples of Words With Friends come-ons and persistent DMs that clearly cross a line:

In December 2016, a KQED writer was so fed up with the messages she and her female friends received (one was even called a “cunt” for not responding) that she contacted Zynga, the developer of the game. Zynga appeared to take the complaint seriously, coordinating a conference call between the writer and three staff members, including the head of Words With Friends. The app updated its blocking feature and added tools for reporting a user specifically for unwanted contact and sexual harassment.

Words With Friends With Benefits

Can Words With Friends DMs ever lead to something positive? I spoke with one guy, Dylan, who tells me about a platonic intergenerational relationship he formed: “I made friends with an elderly guy named Harry and we’d talk a lot back and forth.”

Another man, who asked to remain anonymous, tells MEL about a real-life fling he had in his 20s with a divorcée 10 years his senior, which they extended through months of Words With Friends flirting. “For three months we just played games,” he says. Then, all of a sudden, “there were double-entendre messages sent and some sexual plays. I played the word ‘inside’ or something that could be construed sexually, and then it was off to the races. I said something like, ‘You still want to fuck me, don’t you?’ and she said, ‘Absolutely.'” Cue “months and months of sexting” via Words With Friends DMs. “We’d still play, too!” he insists. Eventually, they met up again in real life and “had sex a million times.”

He shared one PG-13 exchange with us: 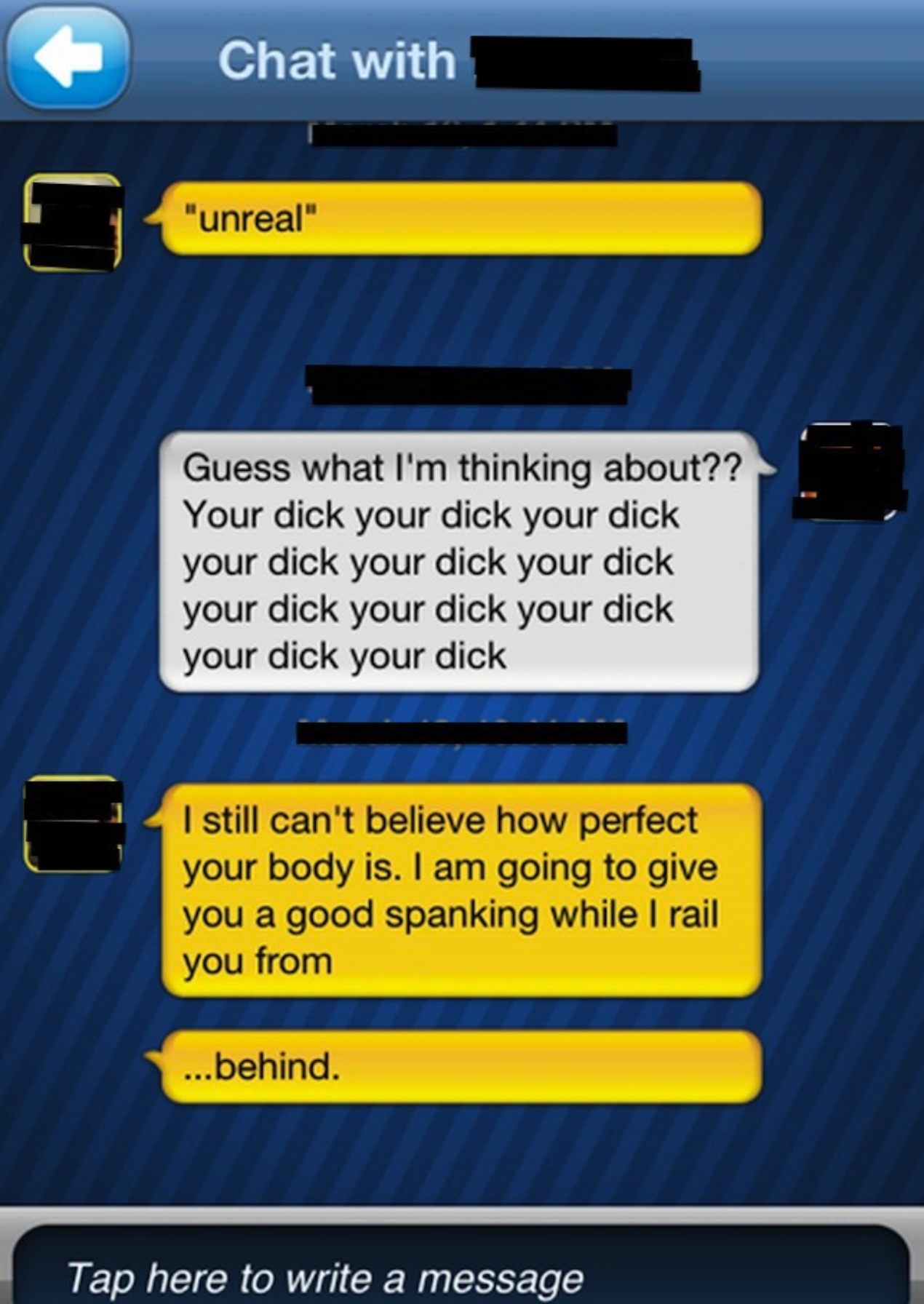 Even when playing among true friends and non-horny strangers, the sexual politics is still complicated and palpable. When Marissa plays against men she doesn’t know (especially those who have tried to chat with her), she sees it as a feminist cause to win. “You’re the only person beating me out of 13 games,” one guy messaged her. “Do better,” she responded.

Maybe any battle of wits or capabilities, like Words With Friends, is inherently sexual. It brings out a competitive spirit, a back-and-forth exchange of power and a need to prove your worth. Men who flood female opponents with DMs act like the competition isn’t just between the two of them, it’s among all the men who use the app, silently battling one another to stand out, a microcosm of sexual selection theory. Meanwhile, men are culturally encouraged to make even an innocuous game like Words With Friends hyper-competitive, while most women… kind of just want to play the damn game. Even seemingly innocuous multiplayer games like Uno for the XBox 360 turned into a full-blown hornfest eventually: Users treated it like a ChatRoulette card game, masturbating, stripping and requesting nudes.