Thanks to Winston Duke and ‘Us,’ the Year of Meaty Man Thighs Is Here

When we consider the aesthetic ideal of ‘curviness,’ we ought to include dudes’ massive hams — and it seems their moment has arrived at last

Jordan Peele’s sophomore horror film, Us, is so jam-packed with Easter eggs, visual motifs and gut-roiling suspense that it hardly gives you a chance to think about anything else. But it does spare your overtaxed brain a ounce of mercy in the form of a bedroom scene. Before a family is attacked by uncanny doppelgängers, the lovable but somewhat oblivious father — played by Winston Duke — thinks he’s gonna get lucky. Hoping to entice his anxious wife (Lupita Nyong’o, in an unforgettable performance), he takes off his pants and arranges himself comfortably on their bed, spread-eagle.

Enough people shared this sentiment to justify a roundup on Bossip, an entertainment site beloved for its over-the-top headlines, whose staff surely outdid themselves here: “Thicks Is Us: Winston Duke’s Thickalicoius Thigh Meats Deserve Best Supporting Actor for Looking Like They Will M’Break You Into Vibranium Dust and Are Pulverizing Panny Drawls Across the Internet.” Not even the normcore touch of the character’s preference for boxers — an underwear style I’ve been forcefully told is not sexy — diminished the thirsting over Duke’s thick thighs. Some people, it turned out, have been hyped on his upper legs since he spread them as tribal leader M’Baku in Black Panther last year. 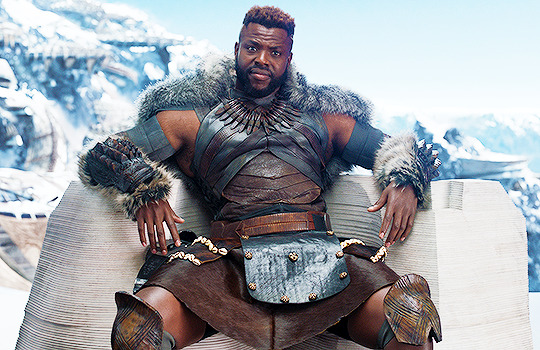 My girlfriend, Maddie, also remarked approvingly on said thighs just minutes after we left a showing of Us, which made me realize that I hardly think of my own (far less robust) pair. I’d bet that lots of men are unaware of their thigh appeal: We tend to be more concerned with what’s between them, and “skipping leg day” is the most enduring meme in gym culture. To the extent that I worry about my thighs, it’s usually a along the lines of: “God, they’re pale.”

How could I have been so ignorant?! Of course people are scrutinizing the girth and tone of male thighs. We’re talking, like, a third of the body here. And, as all the buzz unleashed by Winston Duke’s “meaty” quads demonstrates, a delectable man-thigh is one you can really sink your teeth into.

It ought to be a feast.

Maddie agrees there’s a lot to love in a juicy thigh, not least the contrast between a muscled front and a jiggly backside. In the middle, she points out, is an immensely satisfying bone, the femur being the longest and strongest in human anatomy. The sum total gives potential partners a sense of your vigor when it comes to sex. Scrawny thighs could mean someone’s not putting in the effort, while abundant thigh-flesh arouses the same carnal impulses as a gloriously juicy ass: nibbles, slaps and squeezes. Even better, thighs can squeeze back.

Truly, when we consider the aesthetic ideal of “curviness,” we ought to include dudes’ massive hams — and it seems their moment has arrived at last.

Thankfully, the fashion industry saw this coming years ago, and the summer of 2019 will be replete with menswear that ends well above the knee. Gone is the era of baggy cargos and director Kevin Smith’s comically huge jorts: Now, brands like Chubbies boast of 5.5-inch inseams; basketball stars have returned to the trimmer styles of the 1970s and 1980s; and Vogue is asking, “What’s the point of shorts if they’re not short?” With less fabric, of course, there’s less coverage — and more alluring thigh.

If the warmer seasons are for flaunting what you’ve been hiding all winter, then guys should embrace the trend and give the world a glimpse. Whether the thighs themselves are beefy or on the leaner side, the confidence of the choice is attractive. Not every man can admit he enjoys being objectified now and then, yet by acknowledging the need in this way, he turns a vulnerability into a strength, and he brightens his image to those around him.

But arguably the best part of the craze for Winston Duke’s burly thighs — and the fact that they’re hitching a ride to mainstream fame along with him — is how this helps to reframe our view of large men, and especially large men of color.

Duke has spoken in interviews of how his physical presence as a 6-foot-5 black male sometimes unfairly codes him as imposing or even a threat, and this is precisely the misapprehension that his almost-sex sex scene in Us feels designed to challenge. As he settles onto a mattress entirely too small for his frame, we see that Duke’s size doesn’t make him dangerous; instead, he appears welcoming, cuddly and protective. Soon enough, he will have to resort to violence to survive and keep his family safe, but those killer instincts are purely theoretical as he reclines to into a submissive position, inviting his wife to pounce.

So credit to Duke and Jordan Peele for the courage to direct our gaze thighward, and for inspiring men everywhere to bust out their own thighs for some love. From climbing stairs to popping squats to standing at desks, these things do hard work every day, and they deserve recognition. The fandom is there, along with the fashion. Who are we to ignore real thirst? Biceps are boring. Pecs are weird. Abs are… just not realistic.

Time to get eyes on the thighs.