How the Hell Am I Supposed to Pry That Sidewalk Mystery Snack From My Dog’s Clenched Teeth?

The ‘When Your Dog Has Something in Its Mouth’ Meme' is fun and all, but what SHOULD you do when it happens?

Dogs have always had a thing for ground scraps, and most would gladly partake in regular sidewalk smorgasbords if left to their own devices. But we humans generally do our best to prevent them from feasting on every forsaken French fry and blacktop ham slice. One of many everlasting struggles between man and beast, our attempts at saving dogs from their taste for trash have long been recognized in the annals of meme culture.

Below, we see one variation of the “When Your Dog Has Something in Its Mouth”  meme, in which Samson brawling with a ferocious lion is compared to retrieving mystery items from the mouth of a dog. (In the bible, Samson “tore the lion apart with his bare hands,” which, maybe be a bit more gentle with your pooch?) 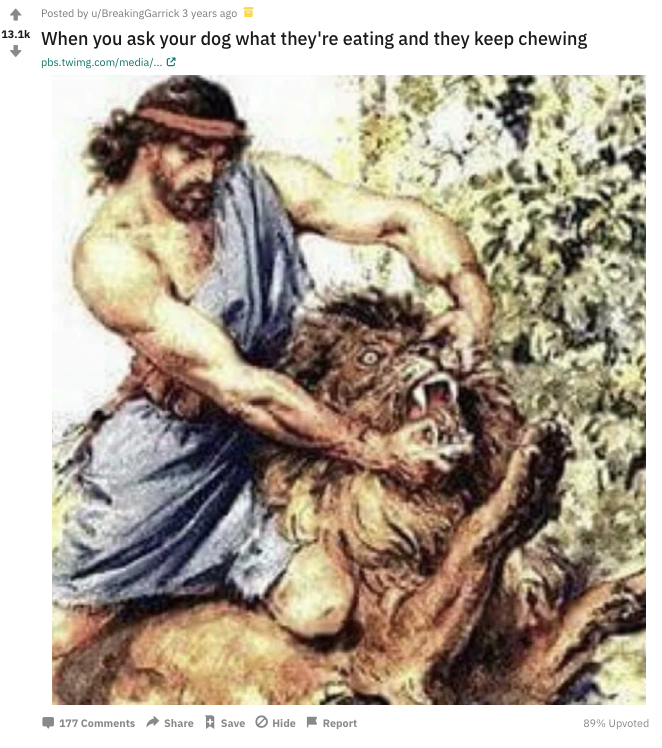 Here we see another version, where a woman engaging in a completely SFW activity is likewise compared to a dog that doesn’t want to give up its surprise floor treat: 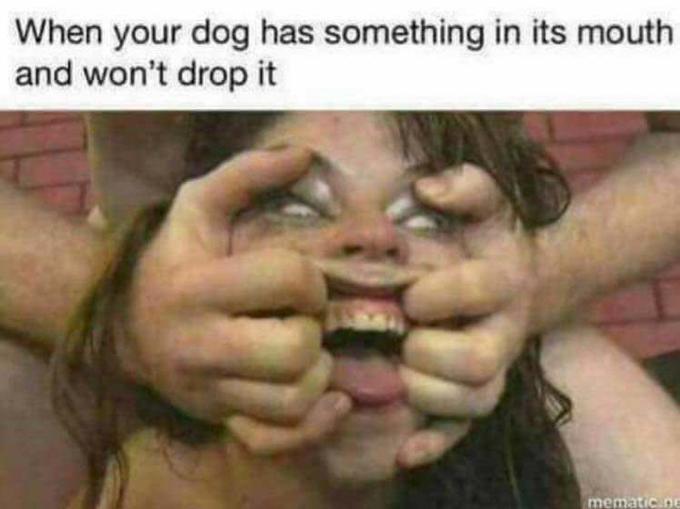 And no meme collection would be complete without the Frodo/secrets image: The list goes on and on, and though there are many different versions of the “When Your Dog Has Something in Its Mouth” meme, they all follow the same general format. “It’s an image macro series,” says Don Caldwell, internet historian and editor-in-chief of Know Your Meme. “The way we define that is any image that has captioned text on it.” He was able to track the meme back to at least 2016 and says what makes it so successful is its ability to exaggerate a highly relatable experience: Think Samson wrestling with a literal lion compared to you reclaiming a mucked up gummy worm from your wee dog, Spot.

But while we can (and probably should) laugh at these memes and the trouble our dogs frequently get themselves into, we can also use this as an opportunity to learn the right way to retrieve street scraps from their mouths. “For situations like this, prevention and being prepared are going to be your best resources,” says Andrea Tu, medical director at Behavior Vets of New York. “The easiest way to deal with this is to train your dog to be great with a ‘leave it’ or ‘drop it’ cue early on.”

Taking the Samson approach, on the other hand, is dangerous for all involved. “This puts you at risk of getting bitten, especially if your dog has food-related aggression or possessive aggression,” Tu warns. “It also puts you at risk of being injured by whatever your dog is chewing on — for example, if your dog picks up an empty canned food can, you and your dog could get cut on the jagged metal as you try to wrestle it from their mouth.”

If training your dog seems too hard, you could also carry around treats they might be willing to trade their mystery items for. “I like to do a swap for a higher value item than the one the dog has,” says Zazie Todd, animal psychologist and author of Wag: The Science of Making Your Dog Happy. “Don’t panic if you don’t have a higher value item: Pretend that the thing you have is super exciting and fun — because it’s interesting to you, your dog will get interested in it, too. In order to get the item you have, they’ll drop the thing in their mouth, and then you can pick it up. If you have treats on you, scattering treats is another way to get dogs to drop things. Again, if you make it seem really exciting and fun that you’re about to drop some treats, that helps.”

If all else fails, “For dogs who really can’t resist picking things up off of the street and refuse to drop them, you can consider training them to wear a basket muzzle,” Tu says. “Fabric ones or mesh ones aren’t recommended, as they work by holding the dog’s mouth shut. As a result, they’re restrictive and uncomfortable, and the dog can’t breath or pant, which puts them at risk for overheating.”

“The other thing that’s important with basket muzzles is that you’ll need to do your homework ahead of time and train your dog to wear it comfortably,” Tu continues. “The Muzzle Up Project has great resources on this, including how to desensitize and condition your dog to wear a basket muzzle, and why a basket muzzle is a great safety tool for dogs — despite our human-based prejudice against them.”

Hey, whatever it takes to get them to stop eating asphalt muck.