All nine ingredients in this jiggly lump, explained (yep, even fumaric acid)

We’re often told that you should never eat anything (or put anything on your body) if you don’t recognize everything on the ingredients list. But since most of us have no idea what xanthan gum or potassium benzoate are — or more importantly, what they’re doing to our bodies — we’re decoding the ingredients in the many things Americans put in (and on, or near) themselves.

This edition: Jell-O Cherry Gelatin Mix, which is made from nine separate ingredients that we’ve broken down in the exact order they appear on their website.

To start, though, I want to quickly address this image floating around the internet, which shows the multiple ingredients in Jell-O and makes some serious claims about just how awful they are: 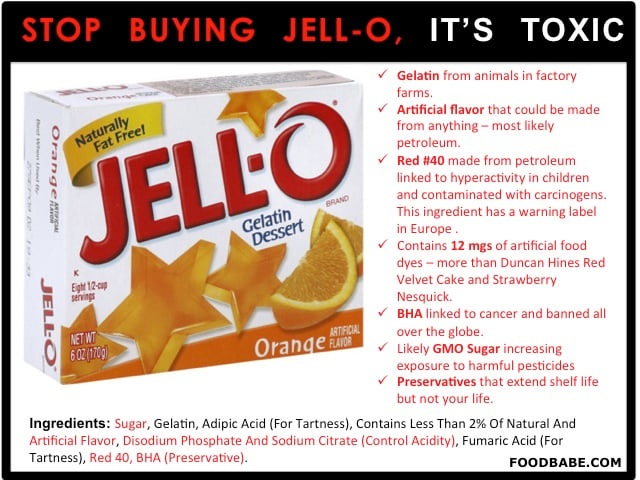 For one, this is an old image: Jell-O has since changed their packaging and no longer incorporates BHA — one of the ingredients deservedly called out for being dangerous and unhealthy by the creators of this image — in many of their recipes. Plus, this meme focuses a lot on making alarmist claims about the existence of artificial flavors and colors, which are often demonized despite being relatively innocuous, especially compared to numerous other food additives.

While some of the claims made in this image are at least somewhat exaggerated, especially now that Jell-O has dropped a few of the more unhealthy ingredients, the overall sentiment that this product is unhealthy holds true — just for a simpler reason that will be explained below.

1) Sugar: Jell-O, as you probably expected, is primarily sugar: One serving — half a cup — contains 19 grams, which is equivalent to about four Oreos. For further reference, the American Heart Association recommends men consume no more than 36 grams and women consume no more than 25 grams of added sugar a day, and that doesn’t include sugar found naturally in foods like fruits and vegetables.

2) Gelatin: Vegans and vegetarians, beware: Gelatin is derived from all kinds of animal tissues — meat, bones, cartilage, whatever — and is a form of collagen, a protein found in connective tissues throughout the body. In the case of Jell-O and other commercial products, gelatin comes in a refined, powdered form, and following the instructions on the package will result in a process that causes the collagen molecules to loosen up and spread out, then eventually bond together to turn what would otherwise be a liquid into a wiggly solid.

While that might sound weird and gross, since gelatin is high in protein and amino acids, some evidence suggests that consuming it could reduce joint and bone pain, as well as improving the appearance of your skin and hair.

For any vegans and vegetarians with a hankering for Jell-O, though, you might be happy to learn that there are numerous brands that use gelatin substitutes, like carrageenan and agar-agar, which are derived from red seaweed, work similar to gelatin and act as decent sources of calcium, iron and fiber.

3) Adipic Acid: Adipic acid is naturally found in both beets and sugar cane. Food and drink manufacturers often add it to their products to provide a tart flavor. While adipic acid can be mildly toxic in extremely high amounts, the amounts in our foods and drinks are negligible.

4) Disodium Phosphate: Disodium phosphate is a combination of the minerals phosphorus and sodium. In powdered products, like this particular mixture, it acts as an anti-caking agent, preventing the powder from clumping together.

Disodium phosphate is on the FDA list of “generally recognized as safe” (or GRAS) substances; however, a 2012 study argues that all phosphates are hazardous. According to their research, accumulating phosphates in the body can cause organ calcification, even in people without kidney problems. Still, the International Food Additives Council claims that phosphates have a long history of being safely used in foods. So as is often the case, more research is needed to come to a definitive conclusion.

6) Fumaric Acid: Fumaric acid is added to many processed foods to keep them stable and add tartness. In fact, it often packs more of a sour punch than sodium citrate. The FDA considers it to be safe when added in small amounts, like in this product.

7) Artificial Flavor: Artificial flavors are chemical compounds created in a lab that mimic a natural flavor in some way, and while that may sound unnatural — and thus, unhealthy — physician and biochemist Cate Shanahan, author of Deep Nutrition: Why Your Genes Need Traditional Food, previously told me that she has no real problem with artificial flavors: “They’re not killers because they’re added in very, very small quantities to food.”

Unfortunately, while I’d love to know what exactly they use to create the unique artificial cherry Jell-O flavor, as we learned in our ranking of artificial flavors, the ins and outs of any one artificial flavor are virtually impossible to track down.

8) Blue 1: Like many artificial colors, blue 1 is known to be carcinogenic. However, as Shanahan explained during my analysis of Doritos, studies arguing this point are a bit flawed: “I’ve always been of the opinion that studies claiming artificial colors can cause cancer are irrelevant because [in the studies] they use really high amounts of the artificial colors  —  like, a million times more than you’d ever get [in your] food [throughout your lifetime].”

All in all, the average person’s liver should be able to break down whatever minuscule amount of artificial coloring we consume with food, drink and Jell-O.

9) Red 40: Red 40, again, is known to be cancerous. But as Shanahan explained above, you probably don’t have to worry about the relatively tiny amounts found in your thick slab of Jell-O.

Similar to Kool-Aid, which I analyzed a while back, Jell-O is mostly just a jiggly hunk of sugar pumped with preservatives, which is probably exactly what you imagined.

But hey, on the bright side, maybe the gelatin will make your hair look nice.