What *Was* Butt Rock?

I’ve probably spent more hours at karaoke than the average human. To me, the combination of drunkenness and belting out my favorite Alanis Morissette songs is peak good times. But never have I given a karaoke performance to rival one I witnessed at a saloon-style bar in Joshua Tree one chilly desert night. The singer was a broad, bearded man in a plaid shirt, faded jeans and thick boots. Unlike everyone who had taken the stage before him, he opted to sit, pulling a stool into place behind the microphone stand. A thin, morose guitar line trickled through the speakers, but it wasn’t until he crooned the first lyric that I recognized the tune, which drifted back to me from the “alternative” radio station I listened to in my high school years: “It’s been a while since I could hold my head up high / And it’s been a while since I first saw you.”

The choice of Staind’s “It’s Been Awhile,” like the faulty grammar of the title, was not ironic. It didn’t even seem as if the guy was reading the words as they came up on the screen — he knew this by heart, and he nailed it. From this, the bar crowd took the earnest satisfaction of the sluggish, wallowing music itself. In its open self-hatred, “It’s Been Awhile” is like pressing on a bruise and finding you kind of enjoy the dull pain.

This ache, I believe, is the appeal of a genre that has long eluded precise definition, and whose biggest bands are spoken of with great disdain: butt rock. One such outfit, Nickelback, made headlines just this month when they lodged a copyright complaint against Donald Trump for tweeting a video meme that used their song “Photograph.” (Twitter removed it.) Covering the response from fans, Guardian writer Poppy Noor noted that on the internet, “the Canadian rock band is shorthand for conservative white guys in trucker hats who still hate the ex they broke up with four years ago,” which is among the more compelling ways to describe the scene. But how would we pin down the sound? Butt rock has existed in a “you’ll know it when you hear it” way, though always in the negative sense: it’s dumb, and its fans are tasteless, borderline brain-dead failures. 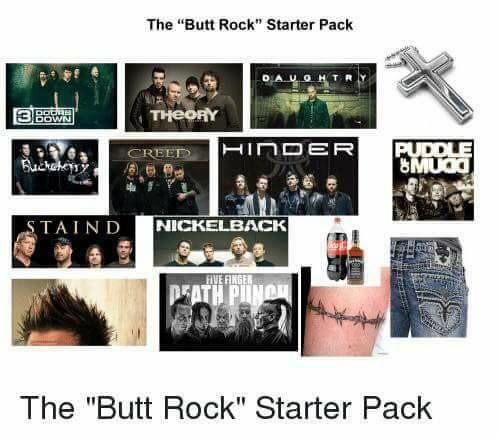 Of course, the name suggests a derogatory classification; at the entry level, butt rock is just “bad” rock, even if some butt rock enthusiasts are happy to reclaim the slur. Yet there are a few fascinating theories as to how this exact pairing of words came about. My probable favorite is from a web forum thread where somebody claims that butt rock is “1990s to mid-2000s heavy rock bands where the singer’s grungy voice sounds like he’s singing into spread butt cheeks.” Less funny, though more plausible, is the notion that “butt rock” is the shortened version of the radio ad slogan “Nothing But Rock,” favored by alternative and heavy rock stations in that same era.

On the anatomical side, writer and podcaster Mark Lee situates butt rock behind what he calls “head rock,” or the groundbreaking, thought-provoking rock of the moment. “By contrast, butt rock follows,” he argues. “It is more derivative than innovative. It is mostly an excretion of what the head had previously consumed and processed. Butt rock engages base instincts.” This is where we get the impression that, for example, “post-grunge” bands like Seether, Puddle of Mudd, Three Days Grace and 3 Doors Down, which go for a generic version of what Nirvana, Soundgarden and Pearl Jam did, are butt rock.

You see the problem. As right as Lee is, we’re still talking about butt rock as a shadow or reaction to something else. Helpfully, he also includes what may be the earliest documented reference to butt rock, from a 1994 book in which Soundgarden drummer Matt Cameron explains that during a 1991 tour, they had to play their songs as “straight-ahead butt-rock” in order to appeal to large audiences unfamiliar with them. “Butt-rock is just the stupidest, basic, three-chord rock that you can possibly play, and it works with big crowds like this who don’t know you as a band,” he said.

Going by this characterization, butt rock isn’t tied to a particular decade and is, broadly, a kind of phoned-in sonic machismo, the greasy fast-food cheeseburger of aural experience. Some therefore reach back to Foghat, AC/DC and 1980s hair metal bands as the roots of butt rock, and by the same token, you could argue that some of the stompy, shouty tracks topping rock charts in 2019 count as butt rock. Still, there’s a strong consensus that the sweet spot of the genre spans from the mid-1990s to the mid-aughts. The Christian butt rock band Skillet, for instance, just had their single “Legendary” adopted as a theme song by the butt rock-friendly WWE, but they got their start back in 1996.

The implication is that there were dominant elements in the radio schlock of this period that together form butt rock’s secret genome — that unmistakable essence of butthood. For closer analysis I’d point us toward Hinder’s “Lips of an Angel,” a song that, dating to 2005, resembles both a final synthesis of those trends and a tearful coda to them. The music video, with its embarrassing acting and sickly aesthetic, helps one immediately grasp the overstrained and undernourished quality of a canonical butt rock jam; I swear you can smell that room he’s in, and the Axe body spray isn’t helping. The vocal delivery has the rasp, phlegm and curiously constipated warble that trace back through Creed and all the way to Eddie Vedder. The guitar plods along, chugging and basic, loud but tamed with a corporate sheen, until a rote solo that’s nonetheless virtuosic by butt rock standards. The narrative, such as it is, concerns a mundane temptation to infidelity: a guy takes a call from his ex while his current girlfriend is in the next room. “Sometimes I wish she was you,” he admits. “I guess we never really moved on.”

Now here’s the weird thing, and the underexplored effect of butt rock: I kind of love “Lips of an Angel,” and not just because my buddy had it as his flip-phone ringtone in college. I’ve actually sung it at karaoke! It is, as they say, so bad that it’s good. It even feels bad (like I’m drinking a cocktail of Monster Energy and cough syrup), which somehow makes this dreary anthem all the more addictive. The hook is a genuine earworm, to be sure, but it unfolds with an effortful churn that maps the usual daily grind, our vapid and doomed relationships, the shittiness and stuckness of being a person. Butt rock’s thematic concerns aren’t unique — there’s regret, struggle, love, addiction and, yes, spiritual yearning — it just paints these in guttural, broken tones, with a nostalgic layer of emo or angsty vibes, stopping barely short of nihilism.

That turns out to be a highly relatable formula, as fans of depression memes would attest. “Lips of an Angel” was Hinder’s breakthrough hit, reaching No. 3 on Billboard’s Hot 100 and No. 1 in Australia and New Zealand. Jack Ingram recorded a country cover that did well, too, and it’s an instructive listen in that it strips the song of everything that makes it butt rock.

When we hear butt rock as the hangover or afterthought of a superior movement in music, perhaps we’re actually hearing an anxiety of the future — the realization that we live at the dawn of a new millennium but aren’t ready for it, because it’s not the gleaming future we wanted. So we drag our feet, lament our mistakes, drink piss beer and drive our busted pick-up trucks through the crumbling towns of America.

Butt rock was a warning, you might say, and we paid no heed, for now the darker age is here. The horror we’ve come to endure is such that the amplified histrionics of white guys with lank haircuts and gristly soul patches are quaint to our ears. Singing to the plight of the lost, lonely, rejected and forgotten man, they predicted the complication of their success: while many listeners would adore them, many others would judge them the nadir of a medium (while sometimes listening anyway, for a guilty pleasure). Our country is locked in that dissonance today, wondering how the resentments driving the culture, toxic and objectionable as they are, can be as popular as MAGA rallies. It must be due, once again, to a resonance we prefer to think isn’t there, or not worth understanding.