Why Is Wish.com Taking Over My Social Feed? 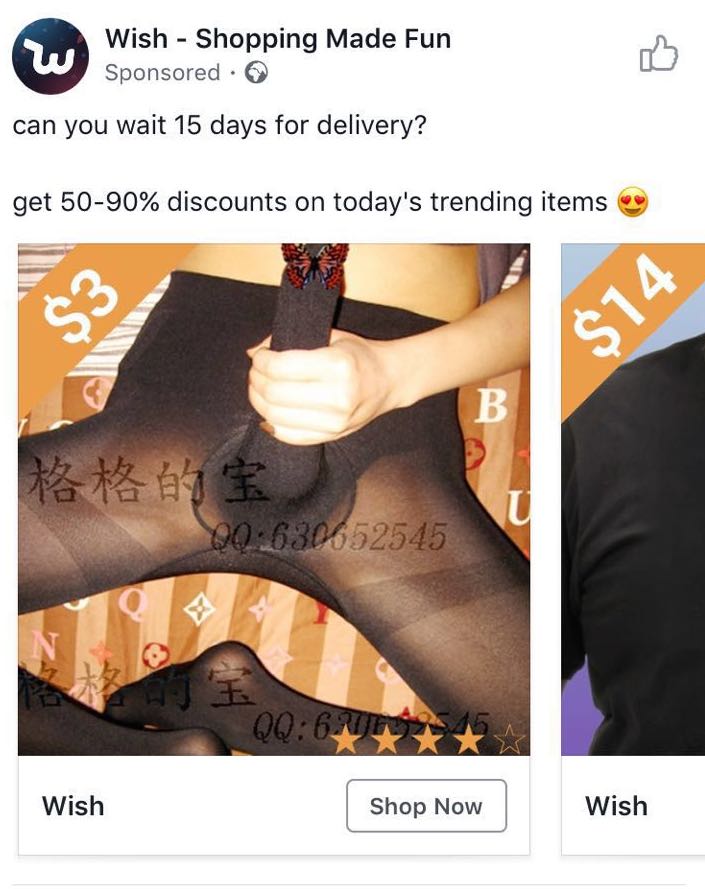 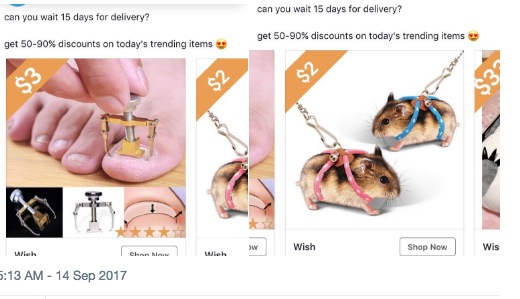 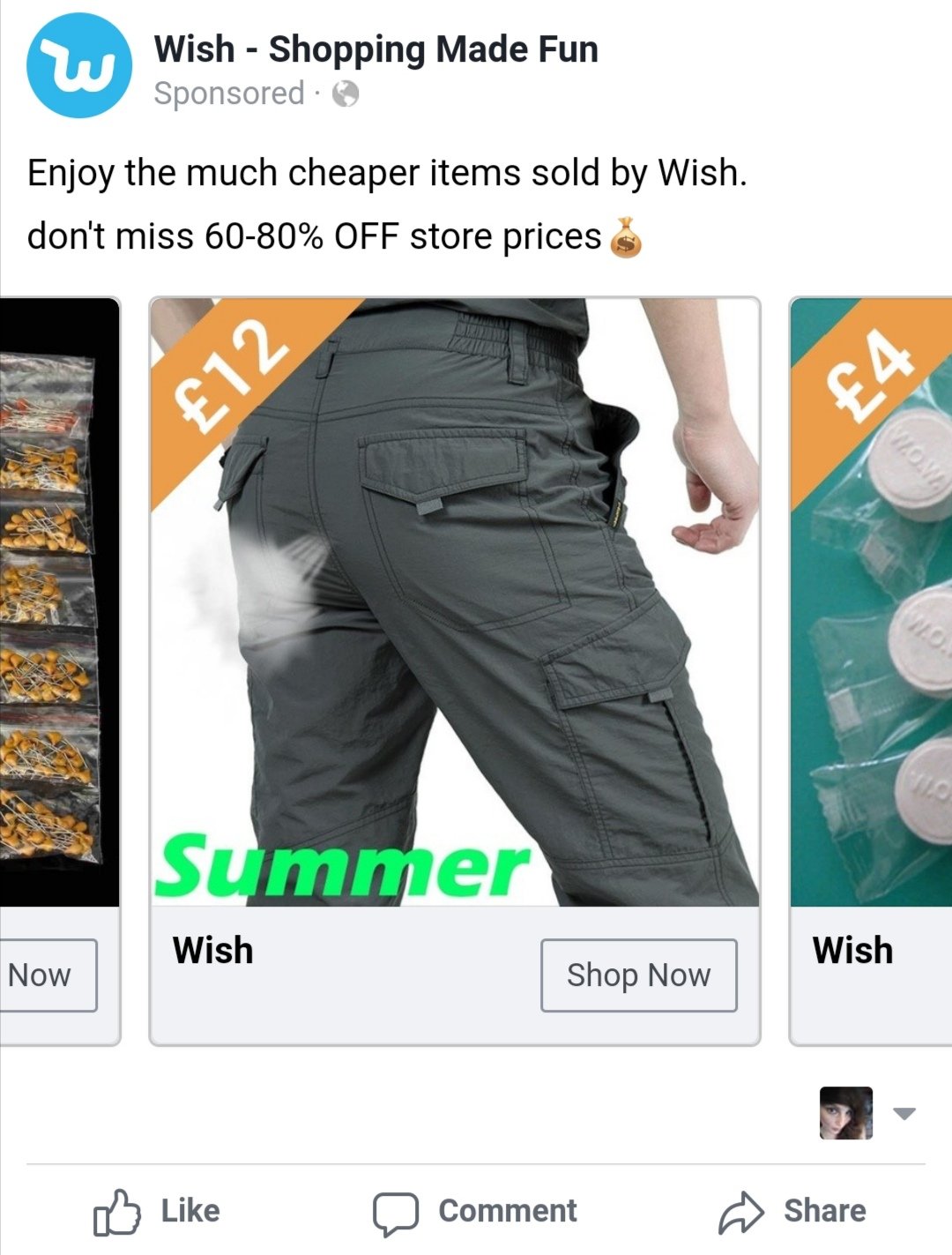 For an online marketplace that’s seemingly taken over Facebook, there’s remarkably little information publicly available about it. What we do know is that Wish was founded in 2011 by software entrepreneur Piotr Szulczewski. In its first iterations, it was built as an online “wish list,” in which users could feed information to vendors about the types of products they wanted. Basically, rather than having consumers search for a particular kind of TV, laptop or kitchen table, Wish wanted to be able to send enough user information to its pool of merchants that these products could be advertised to buyers without them needing to search for them at all.

Though Wish, which technically classifies itself as a software company, is based in Silicon Valley, most of its distribution networks are in China. According to a 2017 report, Wish likens itself to other online marketplaces like Amazon and Alibaba, and values itself at $8 billion, although there are no publicly available documents to support this claim. (No one at Wish ever responded to my requests for comment.) Wish certainly acts in a similar way to Amazon — i.e., it uses social media user data to algorithmically send out targeted ads to consumers, who can purchase the products in those ads from individual vendors or distributors, with Wish taking a cut of the sale.

How, though, does this bizarre — and certainly not child-friendly — website take over everyone’s Facebook feed? And why is it promoting products that seemingly have no relation to our browsing histories?

The answer might lie in changes Facebook made to its advertising algorithm in 2015. Prior to this, if an individual or company wanted to advertise a product on Facebook, they’d have to hand-select the image that accompanied the ad, along with data about who they wanted to advertise to. But in 2015, Facebook launched “dynamic ads” — a product that, in theory, would allow Facebook to take on that burden for you.

This is particularly effective if you run an airline or a hotel chain with a set number of rooms and plane seats, with one supplier controlling the market. But as Alana Semuels, a reporter at the Atlantic, notes, the Wish marketplace has more than 170 million unique products — a number that only continues to grow. And because many of those products are uploaded without accurate (or sometimes any) descriptors or tags, it can end up confusing the algorithm. In other cases, vendors looking to sell as much of their cheap product as possible might try to game Wish’s system by using simple and generic categories to advertise their products. All of which means that if Facebook’s algorithm notices that you’ve been searching for cheap leggings, it’s not unlikely that the next Wish ad you see will include a leggings/dildo combo.

Of course, there might also be a much simpler answer — one that Szulczewski himself finds hilarious: The reason weird Wish ads appear in our timelines is because we keep clicking on them. “People are just clicking on things because they’re crazy. No consumers are actually purchasing these products,” he told the Daily Beast in 2017.

These “curiosity-driven clicks,” though, still work to Szulczewski’s advantage. After all, the Facebook algorithm that Szulczewski’s business depends on considers any kind of click to be a positive metric, indicating that the user wants more of the same — whether that’s penis-shaped lipstick or a vacuum seal for your dick. 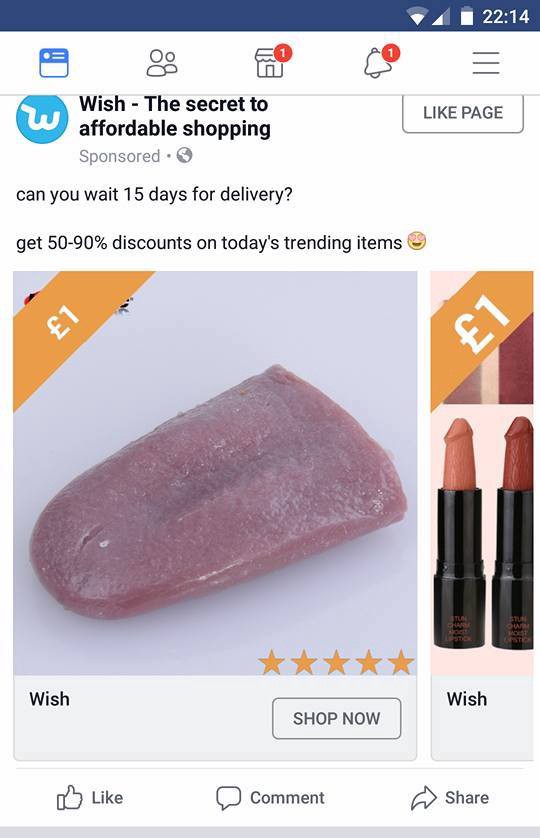 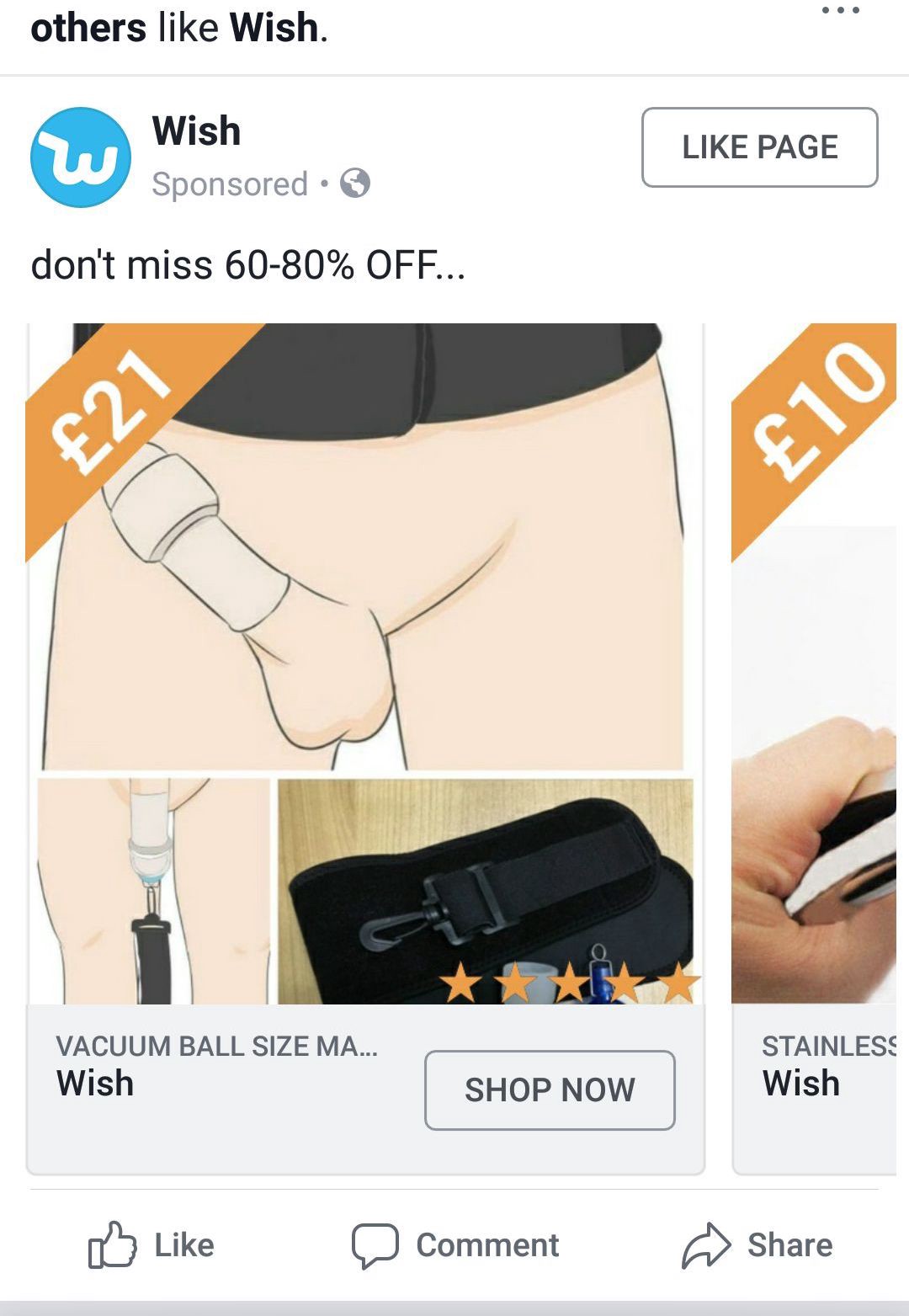 Szulczewski has said in the past that he’s working with Facebook to try stop his ads, but little progress seems to have been made on that count, especially because Wish still pumps millions of dollars into Facebook advertising. So for now at least, you either turn off all the targeted ad settings on Facebook, or laugh along as you drown in Wish’s ocean of crap.