Our 30-Year History of Trolling the Wall Street Bull

In investing terms, a “bull market” — when share prices rise and people are encouraged to buy more — begins in a moment of great pessimism. You’ve got to start low to get high. This had to be the reasoning behind Charging Bull, known as “the Wall Street bull,” a bronze, 7,100-pound sculpture that stands in Bowling Green, close to the heart of Manhattan’s Financial District.

According to Arturo Di Modica, the Sicilian artist who made it, the bull was inspired by Black Monday, a devastating 1987 market crash in which the Dow lost nearly a quarter of its value. The sculptor, having enjoyed great success after immigrating to the U.S. years before, intended to encourage the nation’s strength in the face of disaster. But there was a prankish element to this gift, drawn from the culture of guerrilla and street art blossoming at the time: Di Modica and the foundry where he cast the bull simply dropped it off beneath the Christmas tree in front of the New York Stock Exchange in mid-December 1989, a surprise gift for the city. Although the bull was first impounded, popular demand soon led to its re-installation a few blocks away.

That the bull was rogue commentary, with only the context of its placement by which to understand it, meant it inaugurated a kind of real-life comment thread that has now spanned decades. Di Modica’s message of determined resilience is lost in confusion over the statue’s associations (it is not, for example, owned by Merrill Lynch, which happens to have a bull logo) and sociopolitical resonance. As such, it has become a target for many more artists and provocateurs who seek to leverage its status as a potent meme-symbol for moments of anarchy and rebellion. In short, it was an earnest public statement that generated lots of trolling and shitpost-style dialogue. Most recently, some anti-Trump dude dented its horn with a steel-reinforced banjo.

Which certainly explains why Bluegrass Today covered the story.

Witnesses say this man wasn’t exactly coherent in his rants against Trump and god, but it’s hard to see how he views the Wall Street bull as anything other than an icon of ill-gotten wealth and power. Most attempts to deface and vandalize it are built off that reading — as evidenced by the barricading and protective detail the NYPD had in place around it from the start of Occupy Wall Street in 2011 until 2014. The movement had begun with a call to protest in Adbusters, printed on an image of a ballerina dancing atop the bull.

The apparent feminizing of the muscular and macho animal, whose gigantic testicles are polished by a parade of countless tourists rubbing them for good luck, itself a somewhat subversive interaction with the creature, was a theme that went back at least another year: In 2010, a New York artist known as Olek dressed the bull in a layer of pink and purple yarn, as if to soften its aura. Olek described this, as Di Modica had his bull, as a “gift to the city” and a tribute to his own renegade installation. 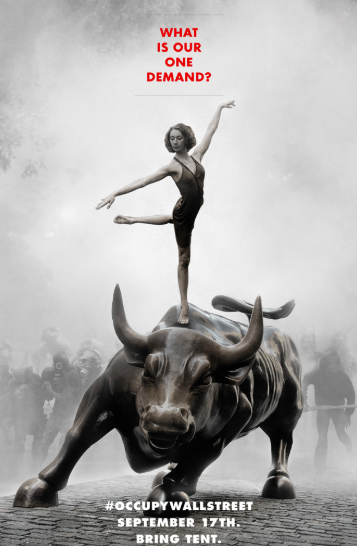 While perhaps not as incendiary as the TV series Mr. Robot imagining a group of hacker-revolutionaries literally castrating the bull with a buzzsaw and posing with the disembodied scrotum, Fearless Girl, an opposing statue unveiled in 2017, proved a lightning rod for critique.

Sculptor Kristen Visbal made the defiant, approximately four-foot-tall figure on commission for asset management company State Street Global Advisors (SSGA), and it was positioned facing the bull for the occasion of International Women’s Day. Although some found the altered tableau to be empowering, many blasted Fearless Girl as cheap corporate feminism. Indeed, SSGA enjoyed $7.4 million in free publicity from the stunt; later that year the firm paid $5 million to “settle claims that it discriminated against 305 top female employees by paying them less than men in the same positions.” Di Modica himself complained about the sculpture, but although his lawyers fairly noted that it had commercialized the original, copyrighted work, the artist spoke more from personal aggrievement: “She’s there attacking the bull,” he said, declaring that his piece represents “freedom in the world, peace, strength, power and love.” 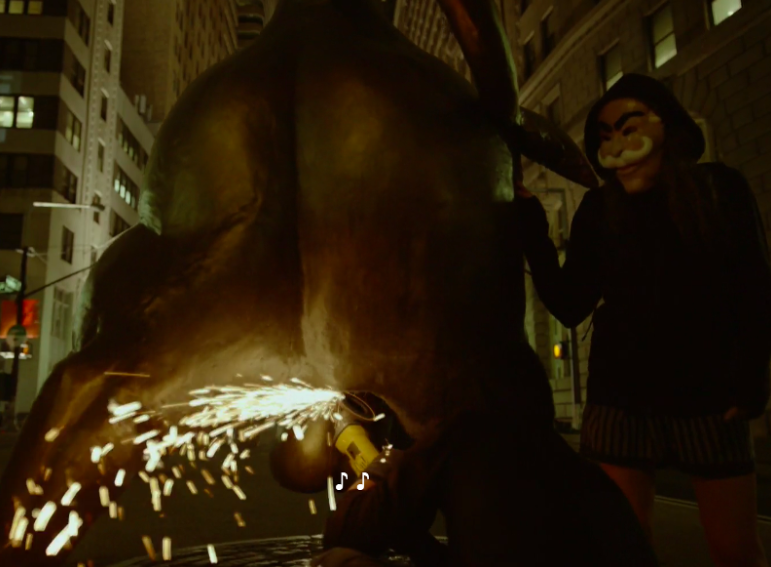 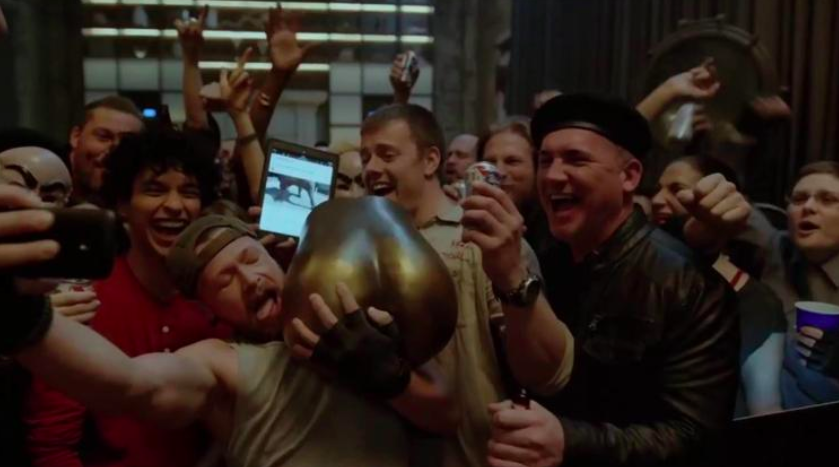 Di Modica correctly pointed out that Fearless Girl imposed meaning on Charging Bull, but he was wrong to suppose that meaning didn’t exist before, or would evaporate once the other sculpture was moved. An artist can’t force the viewer’s interpretation, and it’s safe to say that almost no one looking at a bull about to charge sees “peace” or “love” in its gaze. Like it or not, Di Modica had valorized the American financial system with an image of beastly aggression.

Moreover, he had chosen the bull — an animal we humans have a long history of defying and fighting — to lead the charge to prosperity, dropping it into the nexus of Western capitalism without permission from its masters. The fellow artists and the protesters who encountered it in the decades following were always to be tempted by the story and salience of such a landmark. They troll the bull because it has come to suggest a violent and patriarchal establishment, thanks in no small part to its naively apolitical genesis. By not specifically aligning itself with the victims of a greed-wracked economy, it rather appears to side with the villains responsible.

That the bull signifies an intractable status quo is only more clear in the aftermath of these demonstrations, when any damage is repaired, the sculpture survives another challenge. Fearless Girl has been relocated, every mark or foreign object has been removed, and Di Modica’s work remains more or less as it always was. In a further irony, he’s sold smaller copies for hundreds of thousands of dollars to the wealthy elites the bull’s tormenters often want to attack. For the ruling class, it must be a testament to something else: their total, unending dominance.