This is the insane true story of a beat cop, painter and messiah figure who outran the law — until he ran afoul of Vladimir Putin

Last week, four military helicopters flew low over a Russian river valley. They descended into a wide clearing in the thick Siberian forest of the Krasnoyarsk Territory near the Mongolian border, landing just outside a village the local religious community calls the “City of the Sun.” Dozens of heavily armed, masked men in camouflage streamed out of the choppers. They were part of the Federal Security Service (FSB), the Russian Federation’s successor to the KGB, and acting at the discretion of Russian President Vladimir Putin. As the authorities do in Putin’s Russia, the masked men moved fast and with purpose, conducting a daytime raid of the peaceful utopian commune.

They were looking for one man in particular — Vissarion (birth name: Sergey Torop), a 59-year-old former traffic cop who believes he’s the reincarnation of Jesus.

Along the way, they also captured and arrested Vissarion’s right-hand man, Vadim Redkin, the former lead singer of a Soviet-era boy band. For Vissarion, the pop idol has become something akin to St. Peter and St. Paul rolled into one. He’s both the rock of the church and Vissarion’s chief hype man, the one who labors so that the world may learn of the brilliance of his Master. Case in point: On a trip to the Holy Land back in 1991, Redkin wrote down the first volume of their new bible — The Last Testament, which now spans 12 volumes. It’s part Buddhist, part Taoist, part Russian Orthodox Christianity, part self-help podcast.

This is a whole different kind of Jesus. For starters, Vissarion is married and the father of at least six children. He believes in UFOs and aliens. He paints grand canvases in oils, creating masterpieces that call to mind the works of Caravaggio. And back when he was a beat cop, he once stopped a murder suspect with just the sound of his voice.

By Vissarion’s accounting, he became the Second Coming of Christ on August 18, 1990, when the Holy Spirit appeared in his studio apartment and told him that he’s the Son of God, which is also why August 18th is the highest holy day of the Church of the Last Testament. (For what it’s worth, on the very next day, the Soviet Union ceased to exist.) Within a year, the then 29-year-old had taken the name Vissarion and given his first public sermon. 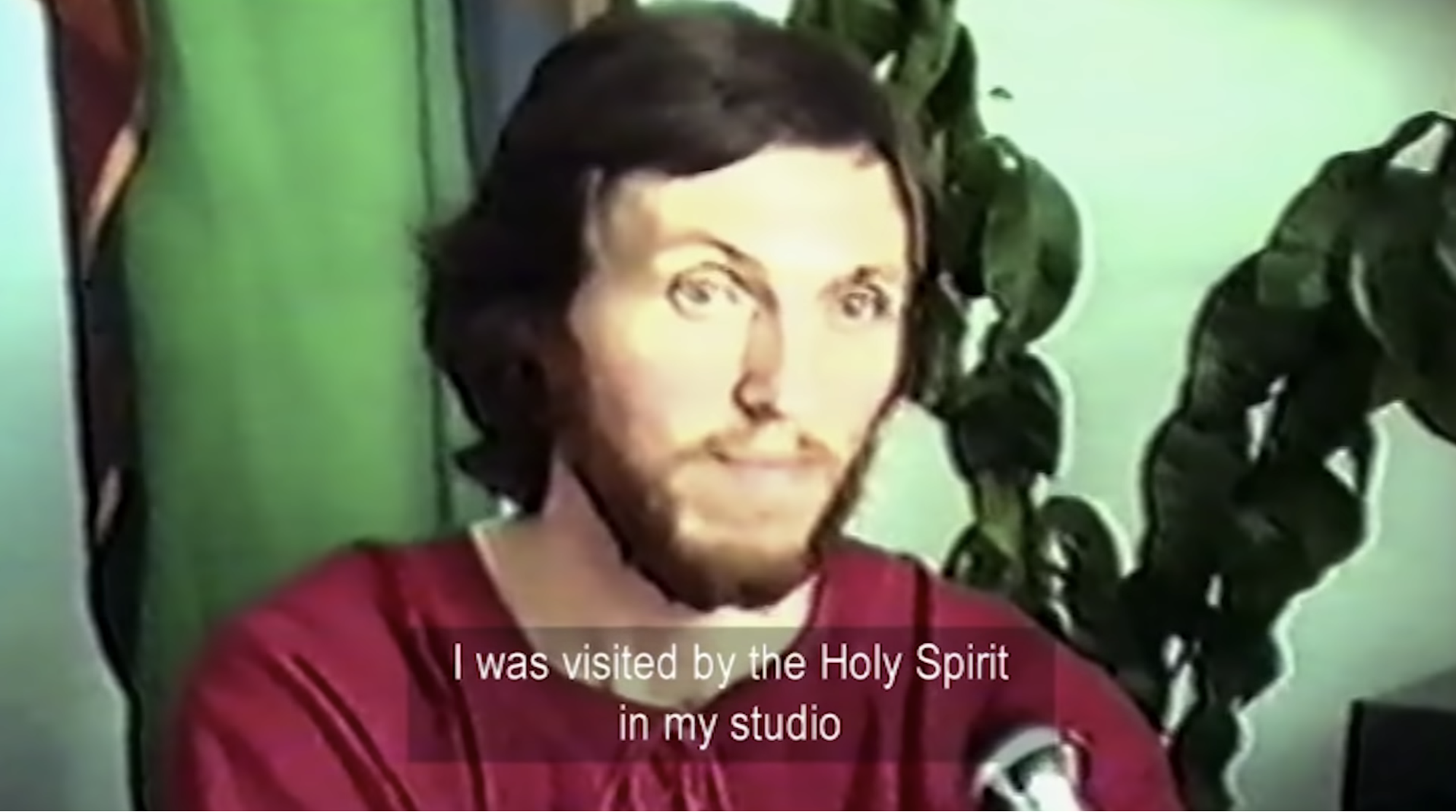 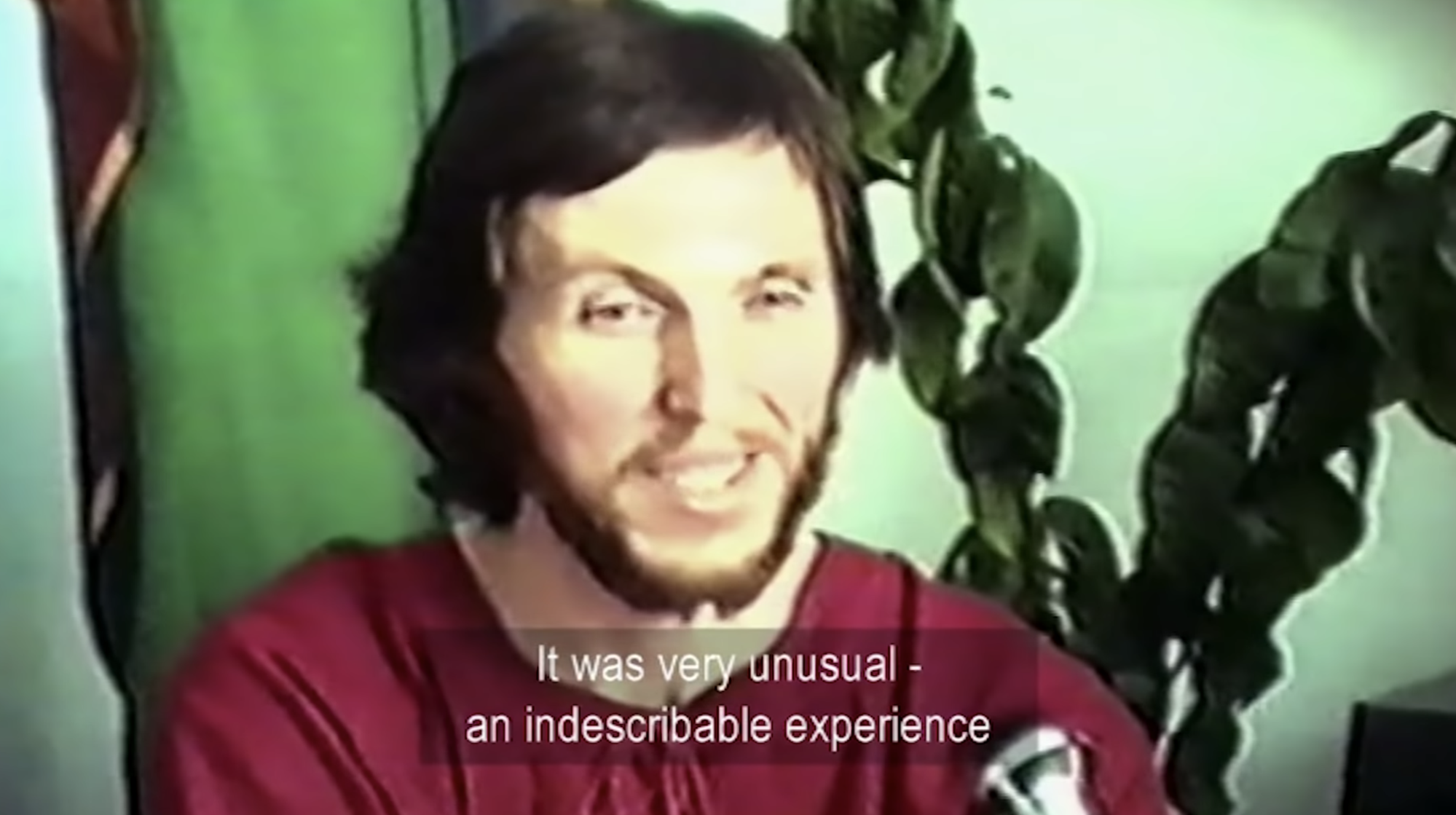 He went cottagecore at the City of the Sun long before it was popular. Among the unrelenting Russian wilderness, the Vissarionites have hewn a home for themselves –– a village made of fairytale architecture and a communal life centered around their living messiah. There are no real paved roads, and the next closest village is roughly 100 miles away.

On August 23rd, a Russian-language journalist named Ivan Litomin arrived there with the intent to film news footage for the Russian outlet REN TV. He presented himself as a representative for a wealthy businessman who wanted to grant a generous donation to the Vissarionites. Litomin and his cameraperson recorded their interaction with community leaders. He also, however, inquired about a former member of the commune, a woman who claims she sold her Moscow apartment and gave all the money to Vissarion, only to be swindled and lose everything in the process (including her son to a mental illness from the trauma of living at the City of the Sun).

This line of questioning reportedly upset the community leaders. So much so that they allegedly beat Litomin and his cameraperson, as well as confiscated their camera and cell phones. Once they escaped the City of the Sun, they filed charges with the police. Those charges resulted in a formal investigation, which resulted in the FSB raid.

Vissarion, however, was arrested on criminal charges unrelated to the alleged attack on the journalist. He stands accused of milking his supporters for money (in this case, morphing into more of a Russian Jim Bakker than a Russian Jesus) and using psychological violence to convince them to donate, the “prolonged exposure to which seriously injured” some of them. He also faces charges that he’s responsible for the criminal “creation of a religious association whose activities involve violence against citizens, causing grievous bodily harm to two or more persons.”

Long before the Russian security forces raided the tiny hamlet in the hinterlands of Russian wilderness to snatch Vissarion, and long before his followers accosted Litomin and his cameraman, the self-proclaimed reincarnated savior has attracted plenty of attention from the curious, skeptical and journalistic alike (with many of them also charging that he’s a fraud). In particular, VICE visited the City of the Sun back in 2012, and filmed the encounter for the short documentary Jesus of Siberia.

And more recently, in 2019, a British documentarian arrived during the week of the Church of the Last Testament’s highest holy day, August 18th. The film crew spoke on-camera with many travelers who made the arduous trek to seek out Vissarion, many of whom were awestruck by him, as well as numerous Vissarionites. The true believers come across as intelligent, thoughtful and considerate. This has seemingly always been the case; it’s said the first followers of Vissarion were mostly scientists, artists, lawyers and doctors –– the intelligentsia of the former Soviet Union.

In the 30 years since the fall of the USSR, the City of the Sun has steadily grown, clearing more land for all the converts it attracts from all over Russia, the former Soviet republics and the rest of the world (from the U.K. and Australia, to Cuba and Canada, to Belgium and Bulgaria). (There are also a disproportionate amount of Germans.) Their collective cohesion is facilitated by the fact that the religious community forbids the use of money, rejects domination or cruelty (which includes the eating of meat) and ensures that all are cared for. That said, it’s not exactly a mud-hippie lifestyle. The multinational, multicultural community of an estimated 4,500 faithful, most of whom are in their 30s, benefit from all the basic amenities you’d expect in any Russian city — electricity, the internet and even dentistry and medical services (due to the presence of the many dentists and doctors who’ve converted).

Still, they’re more like an American hippie cult from the 1960s than not. The men wear beards, ponytails and the sort of simple, loose-fitting clothing you’d expect to see on someone who charges Silicon Valley techbros a small fortune to tell them that their energy is off. Speaking of energy, most of the women wear lightly-designed dresses and long skirts that the Vissarionites believe draw up the Earth’s energy and stimulate fertility. (The community’s birthrate is nine times higher than the Russian average — although, there’s not much else to do in the middle of Siberia either.)

In addition to people at the City of the Sun, the British documentarian also interviewed those who knew Vissarion back when he was Sergey Torop, beat cop. The picture they paint both complicates things and makes it easier to believe Vissarion is a well-meaning scam artist running a long con. At his desk, in uniform, his former partner, who is still a cop, tells a few strange stories, such as the time when Torop told him that he also currently existed on an alien planet. The former partner recalled how “in the summer evenings, we’d look up at the stars, and he would say there’s life up there, that there was even a planet that belonged to him, and where he also existed.”

Back in 2002, Vissarion himself spoke with The Guardian, and unlike his fellow self-proclaimed religious leader Kanye West, Vissarion assured the reporter, “It’s all very complicated. But to keep things simple, yes, I am Jesus Christ. That which was promised must come to pass. And it was promised in Israel 2,000 years ago that I would return, that I would come back to finish what was started. I am not God. And it is a mistake to see Jesus as God. But I am the living word of God the father. Everything that God wants to say, he says through me.”

The thing is, it’s not like he’s spent the last three decades healing the sick or performing miracles. In fact, his most impressive miracle-to-date was the time he reportedly walked around barefoot in the snow and ice of the Siberian winter. (In fairness, he did do so in temperatures that would cause near-instant frostbite and loss of fingers and/or toes.)

His weekly sermons are equally humdrum. He remains seated in a stony seat made in the crook of a mountain, and his followers sit arrayed before him on a pillow-top expanse of grass, with a wide and impressive valley beyond them. It’s where he tells them things like, “There’s a place in the New Testament where Jesus says the time will come when I will no longer speak in parables. That time has come: The time for people to see the aim of life.”

But what exactly is this aim of life? According to the self-proclaimed Second Coming of Christ, “Immortality is the unique quality of the human soul, but mankind has to learn how to achieve it, how to live eternally.”

Of the people who gather in the City of the Sun, some are there to live earnestly in peace and harmony. That impulse at least isn’t a scam. For instance, in 2002, a German engineer explained to The Guardian what motivated him to sell his home, give up his life and move to the Russian/Mongolian border so that he could live with Vissarion: “He radiates incredible love. I met Vissarion last August. He told me we had to follow two laws. It was like an electric shock, like bells ringing.”

Currently, per the calendar of the Church of the Last Testament, it’s the Year 59, as they’ve reset things around Vissarion’s birth year. They also changed the date of Christmas, because if Jesus is back, you don’t need to celebrate his old birthday, right? Instead, the Vissarionites now celebrate a feast on January 14th (i.e., the day of Sergey Torop’s birth).

If Vissarion were legit — if he really were the Son of God — starting up a new calendar seems like it’d be the least of his concerns. That seems like a far more earthly pursuit. It feels like something that some man who hopes to become a revered religious figure would do. It smacks of the very thing Vissarion claims is the biggest threat to the world — ego.