This Flame War Is All Trump Ever Wanted

Most rational human beings would never read Donald Trump’s The Art of the Deal. Unfortunately, I have. And what stuck with me from that execrable volume is that our melting president is closer to self-awareness than you think, at least in one crucial aspect: He knows that he belongs to a landscape of misery and devastation. He gleefully recounts how a rundown New York of the 1970s and 1980s was the perfect setting in which to build his real estate empire — and we recall, of course, that this dystopian environment honed his appetite for racist policing and draconian punishment. Trump can’t enjoy his idea of luxury unless it sits inside a circle of hell, preferably an expanding one. He isn’t “winning” until everyone else loses.

So I think, as we see a wave of mass demonstrations over murderous cops while states reopen during a pandemic that has killed more than 100,000 Americans, that Trump is right where he wants to be. He may even be happy, to the meager extent that he feels happiness. Everything on the outside has turned to shit, but the stock market has trended upward, the Democrats are soft and rudderless, and he gets to tweet through it.

In fact, after years of the media, the courts and the tech industry hand-wringing over All The President’s Posts, we’ve arrived at what should have been the beginning of Twitter’s relationship with Trump as a major political figure: the flame war. The platform never lifted a finger as a white nationalist movement coalesced around his account, but now, at long last, they are trying to kneecap him like this: 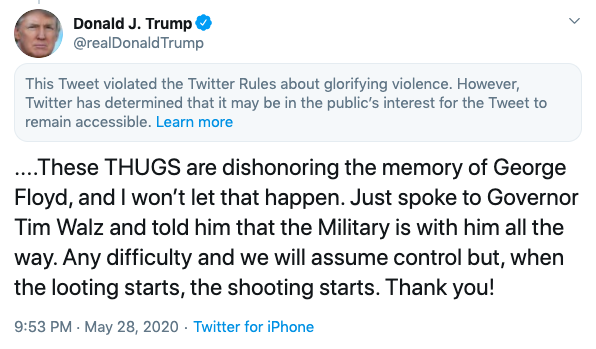 Supposedly, Trump is furious about this “online censorship” that he and other unhinged far-right personalities have encountered, so he’s signed an executive order aimed at combating “bias” on Twitter and other social platforms. He even said he’d delete his account “in a heartbeat” if the press were nicer to him.

But let’s not kid ourselves. He’s been itching for this showdown with the mods — those moderators with the power to “delete posts, ban unruly users and set the rules” of a given webforum, as Kevin Roose explains in the New York Times — and he is relishing every moment. If his tweets were a way to combat the unfavorable reporting he dismisses as Fake News, then this is another phase in that narrative of persecution and victimhood.

Trump’s base has always praised him for telling it like it is, by which they mean he’s fluent in political incorrectness, eager to say what you aren’t allowed to say. Along comes a giant of Silicon Valley to set limits on that reckless speech, as though to prove that a class of elites really does want to curb free expression. On their end, Twitter may be invested in maintaining some baseline objective reality, but since Trump’s tweets are ever at odds with fact, he and his loyalists can say the company fears his independent “truth.”

Twitter’s disciplinary action, however, is laughably tepid: one semi-hidden post and two footnotes on the president’s outlandish claims of mail-in ballot fraud. These warning asterisks could’ve helped back in 2015, but in these days of chaos, politely reminding users that Trump lies and encourages violence… that horse hasn’t just left the barn, it moved a few states over and legally changed its name.

Any veteran of a flame war between mods and shitposters can tell you that they quickly escalate to scorched-earth tactics. Short of an outright ban, there’s not much the people behind the scenes can do to contain a determined troll on their site; as long as the individual has a space to loudly complain, they’ll do so, while growing wilder in their provocations, daring management to do something about it.

This presents a new sweet spot for Trump’s unchanged and wearying schtick. Mods are useful as antagonists because they absorb the blame that comes with officialdom and control — this way, the messes that are of Trump’s own making, or worsened by his response, are partly the result of a flawed system he didn’t build. Don’t like what you’re seeing on Twitter? Well, that’s Twitter’s fault. They’ve got an agenda. They’re not fair!

It doesn’t help that Twitter does have plenty of problems where it comes to imparting and enforcing rules, like every other social startup that failed to foresee its eventual arbiter’s role in the information economy. But their effort to walk the fine-to-nonexistent line of impartiality here is doomed to suffer the net result that overly cautious “both sides” journalism did. Like the newspapers, they’re treating Trump as someone who can be gently corrected or reasoned with. He isn’t. And it’s to his advantage to play the righteous crusader who won’t be silenced — eliding his obvious power to capture headlines no matter where or how he delivers a statement.

However balanced and judicious Twitter is in assigning demerits, the right will never tolerate the regulation of their propaganda, nor will they quit pumping it out. Worse, the half-measures leave room for tedious, bad-faith debate around Big Tech’s obligation to interfere (or not) in episodes of authoritarian creep, etc. Pretty soon, you’re picking apart the app’s terms of service while forgetting that Trump basically threatened to have protesters killed, and has allowed a fatal disease to ravage the continent.

That’s what a flame war is — pure attrition, little substance and no winners except for the person who thrives on the collapse of order. Guess who that is.