Not only does it make a kid feel like they're flying, but it’s also carving out new pathways in their brain

At over 50 pounds, my daughter is just exiting the stage where I can throw her in the air without too much risk of injury to either of us. It was glorious while it lasted, though, and I’ll remember her delighted squeals fondly as she seemingly floated above me.

It might be, in fact, the only “dad” activity impervious to both the passage of time and ridicule. Or as my friend Peter, a father of one, puts it, “The very first time my son laughed was from me tossing him up in the air and catching him. It was a moment I’ll remember forever. It felt like it was the first time he was expressing himself with real joy and fun. It was the best sound ever. I haven’t been able to stop doing it since.”

Meanwhile, Mike, a father of three, describes it as the ultimate thrill for a small kid, “like driving fast in a car or going on a ride at an amusement park.”

But it’s about more than just fun. Peter thinks he does it to “subconsciously get my kid used to risk and not being scared. I see every dad doing it, and it seems hardwired into dads to start exposing their kids to very small risks to show them they will be okay.” For his part, Kyle, a father of four, believes it’s a matter of tradition. “It’s something that gets passed down. My dad did it to me, and I thought it was fun, so I’m going to do it for my kids. That’s most of the reason why. The other part, at least for me, was to get a rise out of my wife.”

Ah, the other (better) half of this equation — the mom worrying about what the dad is doing. Obviously, this is a giant generalization, but the standard setup is that dad throws the kid, and mom freaks out over it. It’s resonant enough that it’s become meme fodder for parents: 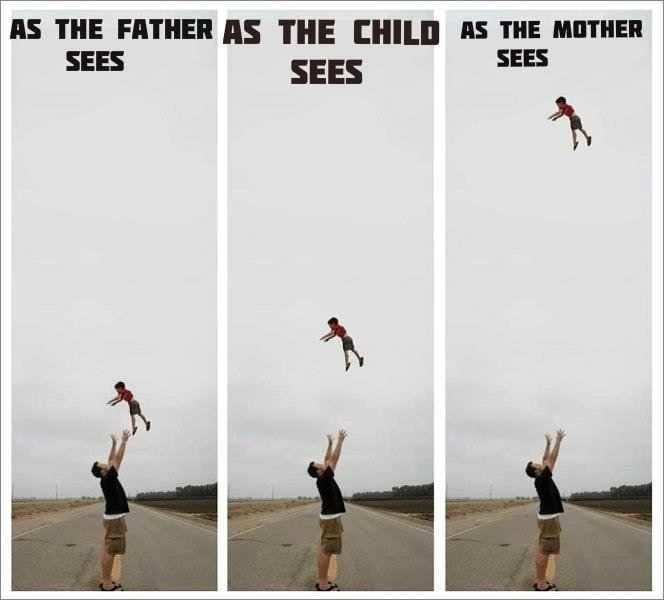 In mom’s defense, her fear isn’t unjustified. “A memory I have that is now funny was when we were walking through a parking garage and I started tossing my son up,” Kyle tells me. “Then, one time, he didn’t leave my hands. Turns out I had tossed him right into a concrete beam running along the ceiling. I felt terrible about it.”

The potential for head injuries notwithstanding, clinical psychologist Andrea DeSantis, Ph.D., who blends aspects of sensory processing, movement and emotional regulation into her practice, explains, “Roughhousing with a child, including throwing them up in the air, has multiple benefits. From a sensory perspective, it activates all of the body’s senses, especially the hidden body senses that go beyond our basic five senses. One of those is the vestibular system, which registers gravity, balance and movement. The other is our proprioceptive system, which is our muscle sense.”

“These two senses coordinate with our eyes to form an internal GPS system,” she continues, “giving our body an awareness of position in space which is associated with physical and emotional stability. Flying upwards specifically gives the body strong feedback and makes children feel powerful as they master their body against gravity.”

On the brain chemistry side, temporary, dad-aided flight increases a child’s endorphins, kick-starts their adrenaline and stimulates the production of dopamine, oxytocin and serotonin. “These are the brain’s happy chemicals, which are very much stimulated with touch and movement, so the brain is creating more of these chemicals due to such intense movement,” DeSantis tells me. “Some even say this kind of activity stimulates new nerve growth via brain-derived neurotrophic factor.”

Basically, because the brain is being stimulated into an almost fight-or-flight response, it learns to repair and protect itself, strengthening it and forming new passageways simultaneously. (Interestingly — though probably not surprisingly — these chemicals are also coursing through the dad’s brain, too, for the same reasons DeSantis — and all the dads above — outline.)

That said, DeSantis is sure to point out that there’s more to fear than just concrete beams. Namely, some kids may be too timid to go airborne. For them, she suggests sticking with roughhousing that’s tethered to the ground, as it will stimulate their sense of touch more but also make them feel safe. On the other end of the spectrum, she says that some kids may seek a lot of elevation, in which case, send them as high into the air as you can, but consider frequent breaks so that they don’t get overstimulated.

Neck and back strength are also important to consider, as DeSantis explains that when you hold your child up in the air, if they struggle to keep their neck and back up against gravity, they’re definitely not yet ready to take flight.

Otherwise, reach for the sky — just like the generations of dads before you.