The Outsized Fury of the ‘Manlet’

Another day, another video of some guy having a public meltdown because other people don’t watch enough conspiracy videos on YouTube. The scene was in Tuscon, where an opinionated fellow couldn’t contain his rage at grocery shoppers wearing masks to prevent the spread of coronavirus, which he insisted isn’t real. A younger man, evidently his son, tried to deescalate the situation, and was forced to pick him up and carry him out of the store… While his dad continued to call mask-wearers “pussies.” Quite the display of machismo.

And valuable in understanding the phenomenon of the “manlet.”

The so-called manlet (it’s a portmanteau of “man” and a derogatory term for little people) has a relatively long history for an internet meme. In fact, the heyday of the term seems to have been the mid-to-late aughts, an era before Web 2.0 social media consolidated its grip on digital life, and standalone hobby forums were major hives of activity. A pair of these — 4chan’s /fit/ board and the notorious Bodybuilding.com pages — are most responsible for the definition and surrounding culture of “manlet” as a pejorative label. If we’re keeping it literal, a “manlet” is any male shorter than 6 feet even. But in usage, measurements are secondary to perception. 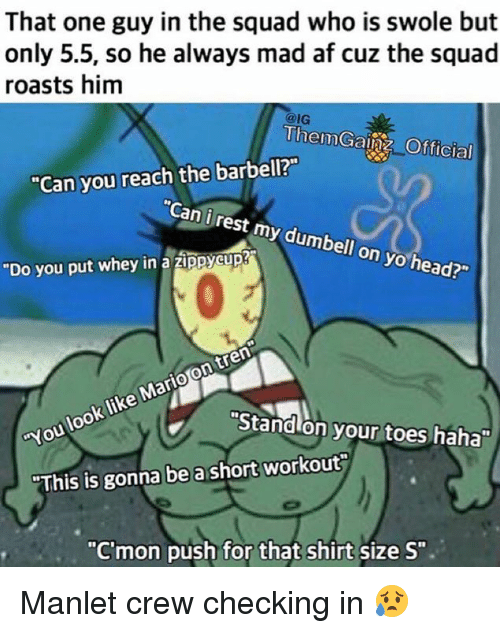 The manlet was first a topic on fitness boards because he is a gym-bro archetype: noticeably short, sensitive about that fact and overcompensating with gratuitous muscle mass. His shame may present as a quick temper and aggressively “alpha” masculinity — but rather than conceal his modest height, these elements of his personality only seem to emphasize it.

• Read Next: Short Buff Guys Are Taking Over the Gym

Such is the intractable dilemma of the manlet. His obsession with being a physical exemplar of his gender continually reminds you that it is taller men typically seen as desirable mates. “Manlet,” then, is a double insult: You are both incomplete as a specimen and making it harder for yourself. This is why even a 5-foot-6 dude can still call someone else a manlet. It’s an attitude, or an anxiety.

It’s even possible to be a Chad Manlet, as long as you don’t have a clue what that means: 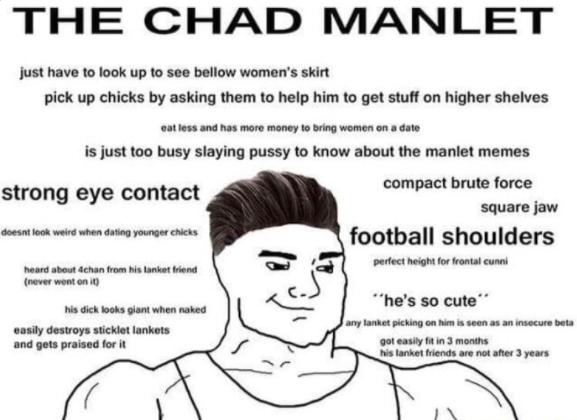 As you can see, the manlet idea hinges on appearance, but typically vis-à-vis attention from the opposite sex. When a 6-foot-3 guy drops the epithet on a shorter man, he’s celebrating his natural advantage in the (straight) dating pool. Though because exaggeration is the essence of shit-talk, the manlet curse takes on a hyperbolic dimension. The competitive edge that a 6-foot man has over a 5-foot-11 rival — sometimes referred to as “King of the Manlets” — is rather unremarkable. But in the tortured male imagination, the difference is vast, and women observe a strict cutoff when assessing partners.

This reasoning, while often played for laughs, can also lead into darker corners of the web. The furthest outpost is the incel, or “involuntarily celibate” community, where men decide that their lack of a sex life is the result of fixed, innate characteristics they are powerless to change — a weak jawline, facial asymmetry or shortness.

There’s self-loathing in that, leavened by simple misogyny; women are held to be too shallow and superficial to give manlets a chance, which is what stokes the manlet’s anger and, most probably, his efforts to bulk up into a mini-Hulk. When you can’t grow vertically, you swell outward.

Except within a homosocial workout scene — the relevant fitness boards skew heavily male, and carry an assumption that lifting weights is something to do and discuss with your boys — the manlet fixation is soon divorced from anything like the views of actual women, who aren’t quite bandying the word around. Women might say a guy is “too short,” but rarely that he’s a “manlet,” and they may even have special affection for petite dudes — “short kings,” that is. 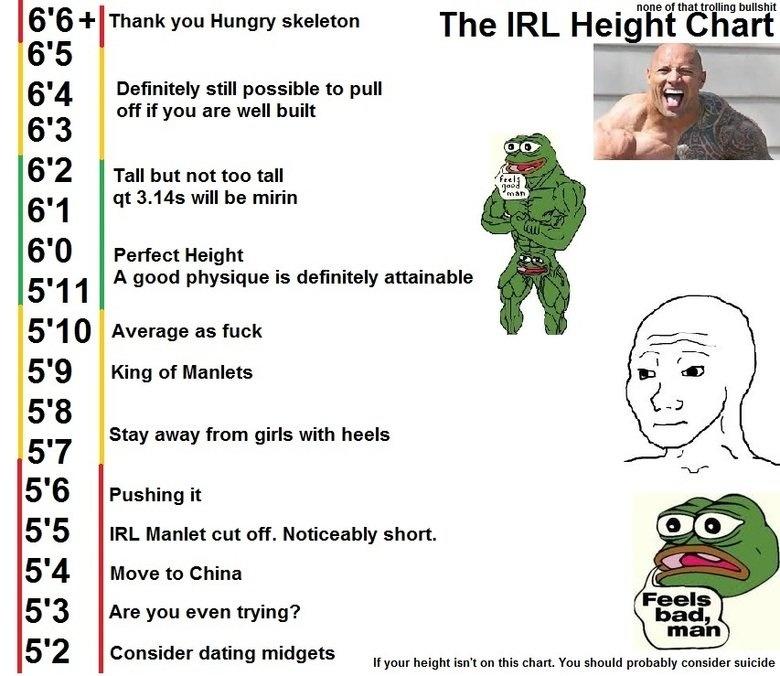 No, “manlet” is specifically a way for one man to demean and emasculate another. (And, strangely, for anime fans to describe certain characters.) Over the years, in the Bodybuilding.com threads, the lads have discussed in detail whether Mark Wahlberg is a manlet at 5-foot-8, the pros and cons of being a manlet (shirt length is a problem), what the plural version is (“manlets,” or “menlet”?) and the upward creep of the height limit one must exceed to be safely considered not a manlet (by 2015, one user complained that anyone under 6-foot-4 had been relegated to manlet status.)

All this, however, is a sort of meta-commentary, since “manlet” is first and foremost a reliable taunt. A chat transcript posted to the forum in 2008 is illuminating: Clearly, the manlet ecosystem is a closed one. It’s a circle of men pointing at one another, projecting weakness and insecurity. Dudes are bullying themselves, yet they speak of the manlet as something created by an exterior society, so when a manlet does erupt, it’s at random people who couldn’t possibly care how tall he is — remember Bagel Boss? If gym bros online keep telling you you’re a manlet, falsely presenting this as an interpretation shared by all women and perhaps Western civilization as a whole, you’re well primed to lash out in a moment of stress.

We don’t know if that Arizona anti-masker ever got pegged as a manlet in some dude-centered virtual space, but I’d bet you anything he’s fought lots of flamewars that devolved into paroxysms of the same fragile masculinity that “manlet” discourse represents. And see what it got him — carried away from confrontation like a damn manlet.

It works for other animals, but when human males try to puff themselves up, they always end up looking smaller.