They won’t stop until they feel the burn

After I tweaked my neck the other day, I ordered some Ultra Strength Bengay. When it arrived, I was quick to apply it and to thank the old chemical gods for the pain relief, as that familiar burn and mentholated aroma immediately took me back to my days spent nursing sports injuries.

Then I made an all-too common rookie mistake: I took a piss.

Maybe 30 seconds later, I felt a new burning sensation light up my crotch as I washed my hands. Dammit! How did I forget the first lesson of Bengay: to never, ever let it touch your dick? While my junk stung with the smolder of a thousand fires, I considered the next obvious question: Are there dudes who intentionally jerk off with Bengay?

Now, to be clear, I don’t mean the dudes who film themselves rubbing Bengay on their balls for a YouTube challenge:

I don’t mean these amateurs and the confused. I mean the men who intentionally sit down with a tube of Bengay, take their dick in their hands and get to work with the express purpose of making their junk feel like they used liquid uranium for lube. I’m talking about the fire-starters, the guys willing to risk a third-degree chemical burn to get the sensation they need. 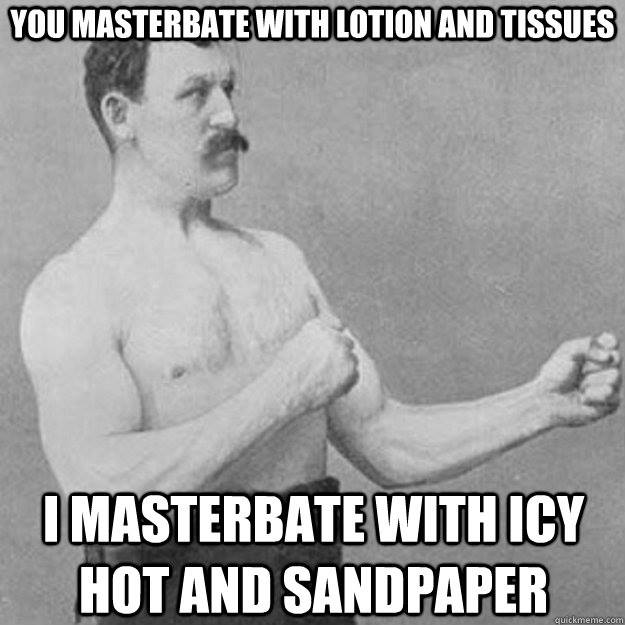 Over on Reddit, however, you’ll find plenty of the opposite: Genital-based horror stories of men who made the mistake of manhandling their meat with a paw covered in Bengay, or worse, Tiger Balm. For instance, this story strongly (and colorfully) recommends that you never fap with IcyHot [sic obviously throughout]:

“Pretty soon the intensity was gaining momentum, and the icy started to feel a little like the inside of a refrigerator (the meatal parts) and the hot began to feel like sitting on the hood of a black car, or lying naked in a driveway in the dead heat of an Arizona summer. Naughty! I expected the intensity of icy to hot, hot to icy to plateau at some point, but it just kept picking up steam, snowballing down the sand dunes of ancient Persia. Pretty soon I started to get nervous, and break into a sweat! Holy shit! This crap is burning!

“Hotter and hotter, colder and colder until I could no longer take the pain, my crotch was being seared by red hot branding irons and dunked into liquid nitrogen at a rate unmeasured by scientists. Unable to take the excruciating pain any longer I jumped into the shower and turned the water on full blast. But which faucet to turn, the hot only burned more and the cold only froze! I was in quite a fix!

“In a panic I dumped one bottle of jergens body wash, two hotel bottles of shampoo, some baby oil, some Vo5 hot oil, 1 econo size bottle of pert plus and some shaving cream with aloe vera onto my abused boyhood, and somehow this magical con-cock-tion saved the day.”

So what’s the deal? Is it safe, smart and sensible to jerk off with topical liniment like Bengay, IcyHot or Tiger Balm, or not?

Their active ingredient is methyl salicylate — which is what gives them their distinctive burning sensation — while the chemical compound is produced by numerous wintergreen plants. The danger with methyl salicylate is that, in large doses, it can be toxic. Case in point: Back in 2007, 17-year-old Arielle Newman, a cross-country runner from Staten Island, died from methyl salicylate toxicity. But again, as doctors also noted at the time, to die from too much Bengay requires a massive dose. (According to research, “toxic ingestions of salicylates typically occur with doses of approximately 150 milligrams per kilogram of body weight,” which for Americans, works out to be 150 milligrams per 2.2 pounds.) 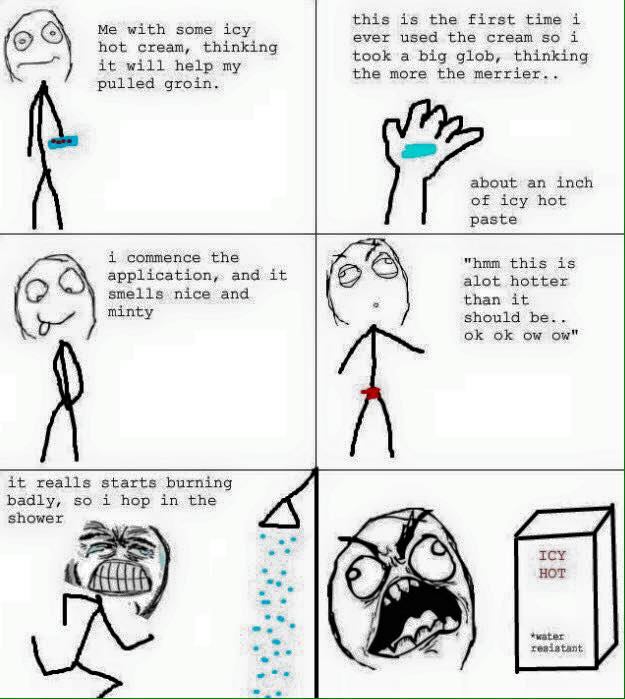 None of this, obviously, bothers practitioners of what’s called chemical play, or per Kinkly.com, “the use of chemical substances, often in liquid form, during sex.”

“These chemicals are means of increasing excitement through different tactile sensations,” the site continues. “They are applied sensually through caresses and sometimes, even using sexual body parts such as the penis or nipples. Substances used include chili peppers, tabasco, lemon, cinnamon, Bengay, Tiger Balm and Vicks VapoRub. These are applied anywhere on the body, including favorites such as the genitals, anus, inner thighs and tongue.”

Among kinksters, safety is always paramount, which means you can find plenty of advice on how to be careful about using dangerous chemicals on your dick within their corners of the internet. For example, the kink blog Blackpomegranate.com offers this helpful primer on chemical play, and as Kinkly mentioned, there are less intense alternatives such as Vicks VapoRub (which is apparently popular with women looking to heat up their self-love sessions, too).

Whatever you do, though, don’t give yourself a third-degree burn just because you’re desperate to feel something new. That’d be dumb, especially in a pandemic, when hospitals are extra busy.