The Insane True Story of the Cabbage Patch Doll Riots

In 1983, the craze over the children’s toy led to violence — and became the precursor to every Black Friday anarchy event to come

During the lead-up to Christmas 1983, Jen, now 45, coveted no toy more desperately than a Cabbage Patch Kid. Upping the ante was the ongoing competition she had with her rich BFF. “Her dad was in the mob, and they had a lot more money than us,” she tells me. “She had about five dolls, so I needed at least that many.” As such, Jen’s Christmas list that year included a quintet of Cabbage Patch Kids — and nothing else.

The problem was, the supply of Cabbage Patch Kids didn’t match the demand, as all two million that were produced quickly sold out. Seemingly every kid in the country wanted one of these hideous dimpled fucks, and their scarcity only made them want the doll more.

So what was a parent to do? Clearly they had no choice but to stampede stores. Once there, they’d rip dolls out of each other’s hands or use a grandma’s head as a step stool — anything to get their hands on that elusive doll. The Cabbage Patch Riots of 1983 were the precursor to every violent Black Friday to come, but unlike most Black Friday sales, this had the added trauma of potentially ruining your child’s life.

The doll itself had its own turbulent origins. Cabbage Patch Kid “creator” Xavier Roberts was a 21-year-old student studying fabric arts when he came across a woman named Martha Nelson Thomas and her pudgy fabric dolls at a craft fair in the late 1970s. Thomas’ dolls were called “Doll Babies” and were modest enough of a hit that they probably look familiar:

Roberts slightly modified the design, renamed them Little People, and gave them a back story. Next, he started “adopting” them out at his store in Cleveland, Georgia, which he called the Babyland General Hospital. The dolls were displayed in incubators, and the sales clerks dressed like neonatal nurses. Each came with a birth certificate and a name (a la Wendella, Ferica and Otis Lee) pulled from a 1938 Georgia birth registry. (Thomas would later sue Roberts for stealing not only her design but the adoption concept, too; they would eventually reach an undisclosed settlement.)

Coleco kicked off a massive marketing effort in June 1983 at the Boston Children’s Museum, where it held a mass Cabbage Patch Kid adoption event. The media ate it up, and Cabbage Patch Kids were quickly featured everywhere.

Another thing Coleco used to its advantage was the fact that although the dolls were mass produced, due to the modernization of manufacturing technologies, no two dolls were the same. Computerized machines were able to create infinite randomizations by varying several aspects of the doll, including hair, dimple locations and skin tone. Their names were all unique, too, which explains hideous ones like Callow Wheezer and Gonnelle Jeweller. Cringier yet, Roberts’ name was printed on each doll’s ass, an early version of a tramp stamp that ensured your doll was the real deal.

Forty-three-year-old Tabetha remembers the hype well. She thinks a lot of it boiled down to competition between parents. “You were a cool parent if you managed to snag one of them — and if you had to fight for it, even better,” she tells me. “One of my parents’ friends had gone out a bunch of times to try and get one for their kid before finally succeeding. They were more proud that they got it than they were excited for their kid to have it.”

Herb was a teen at the time, and he remembers his dad driving all over Maryland to find the doll. His father had earned his riot-shopping stripes during the Atari 5200 panic just the year before, when he went to several stores searching for the in-demand gaming system. “He rushed up and snatched the last Atari out of some woman’s hand,” Herb remembers, adding that his dad used the same less than savory tactics to get his hand on some Cabbage Patch Kids. (Hey, all is fair in love and war, especially when it comes to avoiding Christmas morning tears and tantrums.)

As Christmas approached, the news was nonstop stories of violence at shopping malls. For example, at a Zayre in Pennsylvania, a shop owner had only a baseball bat to defend himself against an angry mob. People were trampled, beaten and scarred — physically and emotionally. Maris Kreizman, 42, felt the tense energy the moment she walked into an Ocean Township, New Jersey Toys ‘R’ Us with her nana. “It was mayhem, and I was freaked,” she relays. “Dolls were being grabbed all around me, and I panicked and decided I wanted the first one I saw — she wasn’t that cute compared to the others. I’m so sorry, April Lissa, but it’s true. She was, like, plain? But I loved her anyway.”

Although Kreizman would eventually get two additional dolls that were more conventionally attractive — Florida Mary Ruth and a Cabbage Patch Preemie named Livingston Raphael — the competition amongst her peer group was impossible to shake. “My friend Lisa had 10 Cabbage Patch Kids all lined up in her room, that cunt.”

Herb worked in retail during the mid- to late-1980s and has some insight into why the crowds became so violent — namely, none of the stores had any procedures in place for crowd control. “Doors opened and people ran in. This was compounded by the fact that electronics and toys sections are typically in the back of stores,” he says. “And so, people with and without carts would make a mad dash in several directions to get there.” 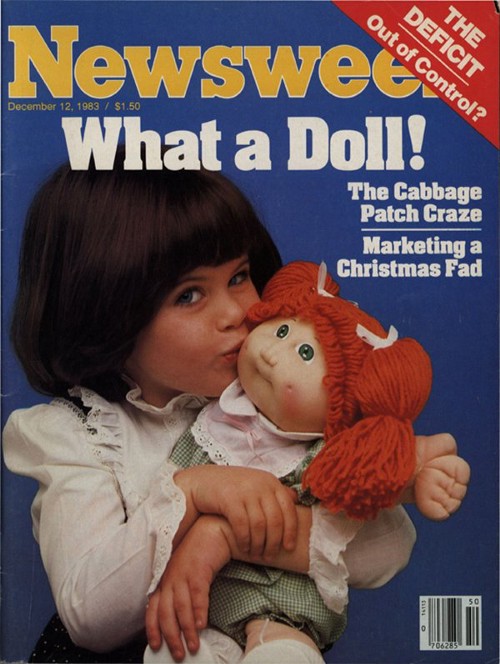 Jen’s sister, a former Toys ‘R’ Us employee, confirms that there were often 500 or more people lined up in the early morning hours with less than 100 dolls available. They were kept in a cage with a lock, so only employees could access them, and there was a limit of two per customer, which didn’t go over well. Her sister also recounts how the thriving black market worked: “The guys driving the trucks would take bribes to put some aside. Customers would give them $65, so they made a $20 profit on each.”

But for every kid lucky enough to get a Cabbage Patch Kid that Christmas, even more were left devastated when Santa didn’t come through. “It got so upsetting for some kids that the teacher banned bringing in Cabbage Patch Kids for show and tell,” Tabetha recalls. But perhaps the most humiliating option was when parents went the knock-off route by purchasing a Flower Kid:

Although it seemed over-the-top at the time, now that 50-year-old Tommy is a parent himself, he gets it. “Maybe I’m just bringing it full circle to my Catholic upbringing and that ingrained sense of guilt, but putting in the work for *the* Christmas present affords a parent a few week’s grace,” he reasons. “Like, we’re not perfect, but nailing it for a few hours can go a long way.”