U.K. Preppers & Survivalists is correcting the record on the conspiracies and fake DIY hacks Facebook can’t seem to rein in

“There are three things we don’t tolerate,” says Mark, a pseudonymous moderator of U.K. Preppers & Survivalists, a Facebook group with more than 9,000 members — the vast majority of whom showed up over the past few weeks. “No rats, no journalists and no one peddling bullshit.”

Before the outbreak of coronavirus, his group had a couple hundred members, most of whom were concerned with ecological catastrophe or a severe global recession. “It was a nice, small community,” he tells me. (Mark was willing to talk to me, but he wasn’t willing to let me join the group, or allow me to use his real name.) Most of the conversations tended to be about how to acquire permission to build a cellar for supplies, the technical components of generating electricity and heat and the fancy dinners you can make with rations.

Lately, though, Mark’s group has spent far more time debunking theories about how dangerous coronavirus is, as well as fake DIY-hacks such as making hand sanitizer out of skincare products. In fact, at the end of last month, in response to the huge demand for membership and the mass of disinformation being spread by other prepper groups, Mark’s group changed its name and altered its mission: To give reasonable, practical prepping advice to the public.

“I’ve been a camper all my life, so I know a lot about survival, and I’ve been a ‘prepper’ since I was a kid,” the fiftysomething Mark tells me. Though preppers are often associated with conspiracy theorists, doomsday cultists and even the mentally unstable, he says this is far from the truth. “One of the things we tell people in the group specifically not to do, is peddle conspiracy theories,” he explains. “I’ve deleted so many posts about the 5G network, or ‘news’ from an obviously fake site that COVID-19 is a bioweapon made by China.”

He also encourages members to not view news reports about the severity of coronavirus as automatic lies. “Question the news, and definitely question the politicians,” he says. “But there are some people who blame doctors, who blame nurses, who blame the people trying to help. That kind of disinformation causes more panic, which isn’t helpful if you and your family are just trying to keep safe.”

That said, Mark tells me that the most pressing issue in prepper groups isn’t conspiracy theories as much as managing disputes between members and vetting newcomers. While Facebook has invested more resources into combating misinformation on its public platform, it can’t do much to monitor and regulate activities within private groups, or private WhatsApp groups. “Last week, there was an issue when one member joined our group, and started accusing moderators of deliberately withholding information,” Mark tells me, in reference to an article from an unverified news source based in Singapore purporting that the number of global deaths far exceeded the then death toll of just over 2,000.

“Our group is one of the only places where people who feel anxious listening to or watching the news can get information, and a community that they can trust and rely on,” he continues. “So when you have people coming in and disrupting that, it can be really dangerous. It makes way for actual nonsense conspiracies that don’t help anyone, and will make people take this virus less seriously than they should.”

At the same time, Mark adds, there are people who join the group because they want to “impress people by convincing them they know the truth about what’s really happening.” To that end, in the past few weeks, the group has had to remove multiple people who claimed to be professional microbiologists, someone who was impersonating a doctor and others promoting survivalist brands that sell industrial-scale gas masks and hazmat suits. “One of the biggest jobs we have is to remind people that this isn’t a movie, which, a lot of the time, is their only reference to something like coronavirus. These brands sell their products by convincing people to panic. So it’s a perfect time for them.” 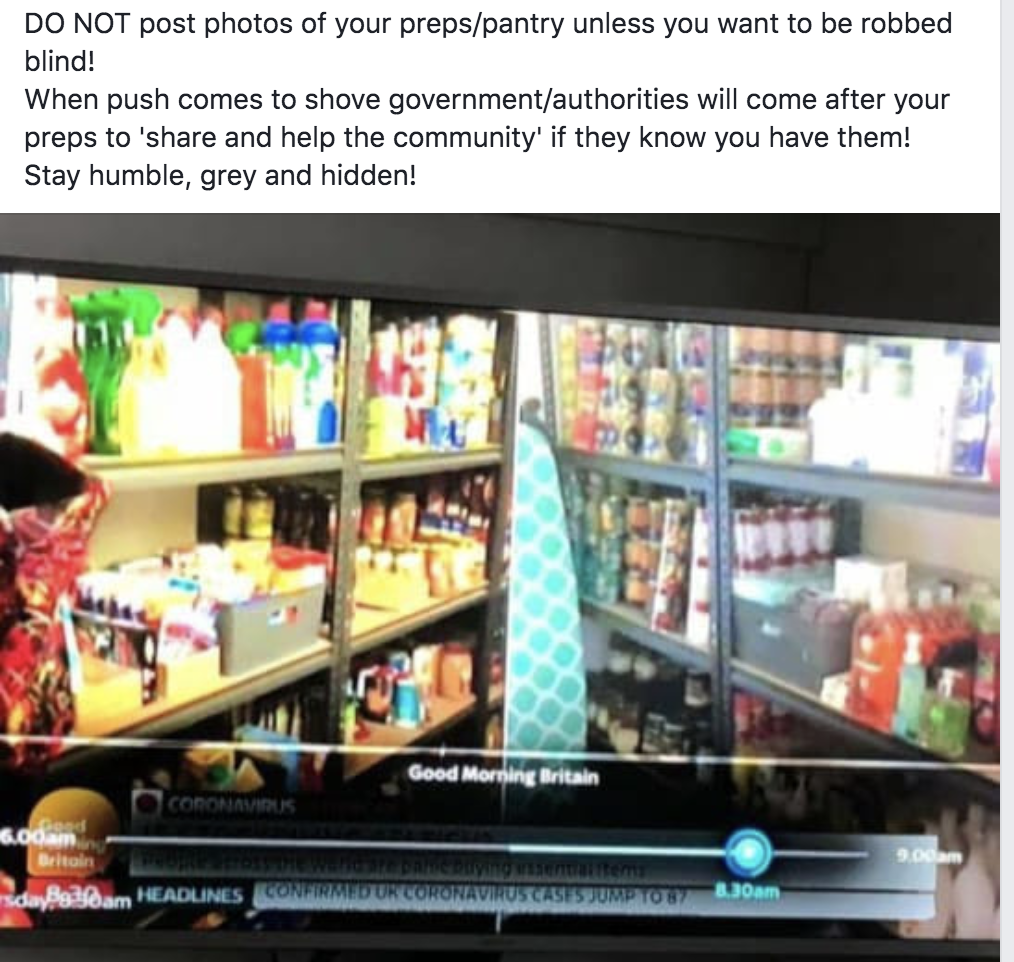 It’s also important to note, as Mark reminds me throughout our interview, that he nor other preppers actually know the nature or capabilities of the coronavirus — something he believes is driving “unnecessary stockpiling.” As such, he’s had to warn members not to buy giant amounts of Calpol, a sweet licorice medicine in the U.K. designed to help children combat the common cold, as well as to not over-buy sanitizers, anti-bacterial wipes and staple foods. “Most of the time, the preppers in our group were building up stockpiles and making plans over years and years,” Mark explains. “They were thinking about long-term planning, growing their own vegetables and composting. We’re now dealing with people who have likely never thought of this before, and they want a crash course in prepping.”

For that, Mark emphasizes that planning shouldn’t involve the worst possible scenario, but rather, the day-to-day logistics of life under quarantine. “I tell people to think about how much food they’ll consume, especially if they won’t move around much in their house,” he says. “It’s also about being able to evenly use things like toilet paper, soap and water. Prepping isn’t about having loads and loads of stuff — you might not run out, but you might realize a lot of it will end up going unused.”

As we finish talking, Mark takes a quick break after one of his colleagues flags a problem in the group — a dispute between members about whether the cardboard in toilet paper might contain COVID-19, and whether bleach can be used as a disinfectant to treat their anus. “Jesus Christ,” Mark says. “I bet that’s going to hurt more than any fucking virus.”