The Dads Didn’t Want Pets. Then Came the Dogs — And the Viral Videos

Maria Cassano’s dad has always kept a clean house. That tidiness, combined with his children’s allergies, led to a quick rejection whenever Maria and her siblings would beg him for any kind of furry pet throughout their childhood. “My dad’s a really empathetic guy and animals always loved him,” the 28-year-old writer in Long Island explains, but a few turtles and a bird was as far as he would go when it came to accepting animals into the family.

Then, a stray cat (eventually named “Mama”) and her kitten ambled into the family’s backyard and things began to change. “There was some initial nagging from my dad’s girlfriend and I, but he played the ‘Dads Who Didn’t Want Pets’ role well,” Cassano recalls. “There was some eye-rolling and comments like, ‘Don’t expect me to start feeding that feral cat just because she has a kitten.’ The thing is, though, he’s actually a huge softie.”

And so, his true colors eventually began to shine through. “Every time Mama and the kitten didn’t come back for a few days, he worried,” she tells me. Not long afterward, she discovered him building heated cat houses, equipped with security cameras to “keep an eye on them.”

“He wanted to make sure they stayed close by and were cared for,” she explains. “Before long, he was watching Mama eat at the window, making spfff spfff spfff noises, and greeting her every time he went out to barbecue.”

Even after finding a permanent home for the kitten, Cassano says her dad continued caring for Mama. Soon, she adds, “the cat houses and food started attracting a few other cats. I refer to them as ‘the tenants of Steve’s Cat Condos,’ and at some point, they even got personalized food bowls.”

Cassano took her story to the aptly named subreddit r/DadsWhoDidNotWantPets, where it currently sits as the top post of all time:

Outside of the subreddit, which boasts nearly 195,000 subscribers, videos of dads playing with, cuddling or building things for the pets they didn’t want are constantly going viral on TikTok, too. The memes, of course, naturally followed. 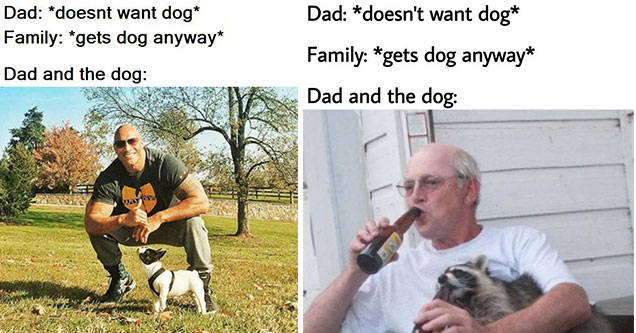 About these specie of father, Cassano posits that some dads, just like her own, were so hurt after losing their pets growing up that they’re hesitant to experience such feelings of loss again. “So they decide to play it tough instead. But they can’t help but fall in love with their kids’ pets, and the internet loves this inevitable, heartwarming hypocrisy,” she theorizes.

Moreover, she continues, it’s an “outdated gender-role thing, specifically with the Baby Boomer-parent and millennial-child generations. Our dads love to act like they’re tough, grumpy and already paid their dues when it comes to ‘childcare,’ but in reality, they’re not immune to the adorableness of animals. No one is — and if you are, you’re probably a jerk.”

As for her dad specifically, she says, “I’ve since bought a house and rescued a dog, and my dad is already referring to him as ‘his grandkid.’ It’s probably for the best, though, because he’s not getting any human ones from me.”