With a crucial unemployment benefit set to expire, we should realize exactly what we’re losing

It’s hard to see the U.S. government’s one-time $1,200 coronavirus relief payment for qualifying individuals as more than a Band-Aid on a gaping wound. (That said, I would still like to receive mine, which must have been lost in the mail?) But the stimulus package did contain one very good provision: an extra $600 per week for Americans collecting unemployment benefits.

That stipend is likely to lapse at the end of the month, and it remains unclear what Congress will see fit to replace it with. You’re aware, of course, that canceling it now is monstrously stupid, as the pandemic hasn’t gone away, the economy isn’t recovering and 30 million people are still jobless. The conditions that made the $600 extension necessary are, if anything, much worse. And so we’re hearing, as the New York Times puts it, that taking the bonus away will push many “past the brink.” We’ve all but ensured a wave of evictions, since mortgages and rent will go unpaid when the extra cash dries up. Except among politicians who could do something about it, consensus holds that this money is keeping a massive sector of the populace afloat. Barely.

But that’s not quite the whole story. In this nation, we have such a stigma attached to public assistance that we’re almost afraid to emphasize its value. Either you take the heartless right-wing view that we shouldn’t help our fellow citizens — that anyone who accepts benefits is a lazy parasite — or you think of unemployment checks as a last-ditch effort to stave off ruin, a sort of obligatory charity. Rarely remarked upon is the positive change that becomes possible when you invest in someone who would otherwise be scraping by.

This is the principle behind universal basic income; we just tend to ignore it in any discussion of support for the unemployed. The r/unemployment subreddit, however, has some illuminating anecdotes on this. The most popular post this year asks: “Who here just enjoys getting paid a livable wage and be able to enjoy themselves?” This user said that the weekly $600 has reversed their whole outlook. 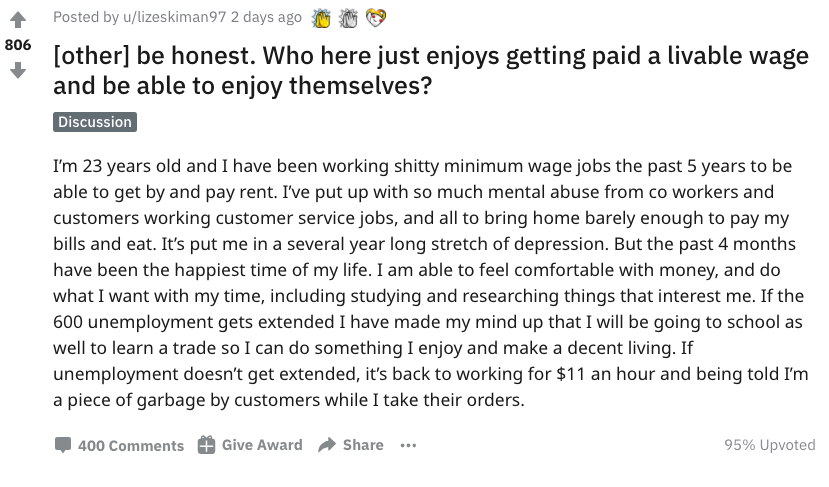 We’re so accustomed to the idea of unemployment pay as a fragile, imperfect bridge from one lousy job to another that it’s shocking to read a story of how it allowed for self-improvement and long-term planning. Not only that, the post hints at a broader societal advantage to releasing minimum-wage workers from corporate exploitation: This gives them the freedom to get educated, develop new skills and maybe even start a business of their own down the line — a transformation from downtrodden, mistreated service laborer to a fulfilled, productive member of the American workforce.

Why the hell aren’t we always putting money toward that goal? Only shortsightedness, greed and inflexible ideology explain it. What a drastic failure.

Other unemployed redditors have chimed in to share what a vital impact the $600 had. “I’m trying really hard to use my time… to work on my craft so that I don’t have to go back to minimum wage and being ridiculed,” one wrote. A 23-year-old related how the stress of balancing three jobs had led them to drop out of school; now, “able to actually save money for the first time,” they’re thinking of enrolling again. From a third commenter: “I quit biting my nails after 20 years. I finally applied (and got into) college after being too depressed to bother for the past two years since [high school]. This is the first time in my entire life I’ve been able to go days, and even a week or two without anxiety attacks.”

Another anxiety-prone person noted, “I haven’t had an attack in several months, my relationships have improved and I’ve had time for myself, hobbies and volunteering (which led me to a job I’ll be starting in the fall).”

Far from turning us into idle blobs, as Republicans would have you believe, direct payments motivate.

Washington — and state leadership — just don’t care about that. In legislative chambers, aid for the unemployed is framed as financially unrealistic (“Where will the money come from?”) or an invitation to fraud. Therefore, the systems are made to be miserly, understaffed and dysfunctional, which guarantees that legitimate, industrious applicants are denied along with the supposed league of scammers. To fix that, we have to shift the conversation around this money and its purpose.

Yes, it means more stable households, with clothes to wear and enough to eat, but it is not merely a lifeline for the essentials; it also puts individuals and families on the path to future success. Happiness, creativity, passion and better mental health — even though they can’t be quantified in a budget, they matter, and they’re essential to America’s survival.

Axing the $600 benefit is making the choice to throw all that away. And we will suffer for it.