I Learned to Love Again on Vaporhuasca

Armed with DMT cartridges and a plant called Syrian rue, this psychonaut tripped his way to a new lease on life

The powerful hallucinogen DMT ranks high on the psychedelic pecking order. It sends users on a mighty voyage that even seasoned psychonauts have trouble putting into words (studies suggest that DMT trips model near-death experiences). Yet, there are brave souls who endeavor to descend even deeper into the great beyond. They purposefully increase the potency of their DMT by combining it with the seeds of a plant called Syrian rue, and the outcome is a trip closer to that brought on by the psychedelic powerhouse Ayahuasca.

Rob, a 44-year-old YouTuber who runs the channel Adeptus Psychonautica, which is devoted to psychedelics, tells me that this vigor-enhancing effect is due to an enzyme that exists throughout our bodies called monoamine oxidase (MAO). Normally, MAO spends its time deactivating monoamine neurotransmitters like dopamine, noradrenaline and serotonin once they’ve served their purpose. However, there are chemicals that can stop our MAO enzymes from doing their jobs — they’re known as monoamine oxidase inhibitors (MAOIs), and as Rob explains, Syrian rue contains several called harmala alkaloids (more specifically, the compounds in Syrian rue are a subclass of MAOIs known as reversible inhibitors of monoamine oxidase A, or RIMAs).

That means, if you ingest Syrian rue seeds — where the harmala alkaloids are concentrated — before taking a psychedelic such as DMT, they’ll stop decommissioning the neurotransmitters the drug produces. They build up in your body, and as Rob says, “This leads to a much more vivid and longer-lasting trip.” He even goes as far as saying the combination is “probably the most powerful psychedelic substance on the planet.”

Ayahuasca is essentially a pre-packaged version of this. It contains DMT and its own MAOI, which is why an ayahuasca high can last for up to 12 hours. Fittingly, psychonauts call the combination of vaped DMT and Syrian rue “vaporhuasca,” and eaten DMT and Syrian rue “pharmahuasca.”

To get a sense of what the former is like, I asked a 50-something English vaporhuasca connoisseur who goes by the name Minty Love on YouTube to take me through one of his trips. His channel is dedicated almost entirely to DMT, and he’s had his share of indescribable (and sometimes nightmarish) experiences, such as when he was paralyzed in time for what felt like forever. But during one particular trip, he met a deity who changed his life forever. I’ll let him tell the story.

First, though, a disclaimer: High doses of Syrian rue (three to four grams are considered to be low doses, but Minty has found that even those doses can be far too high — his preferred dose is between 600 and 800 milligrams, but he says it depends on the batch of Syrian rue) have been associated with a number of negative side effects, ranging from nausea to heart problems to death. Syrian rue can also interact with other medications you might be taking, so look into that. Likewise, DMT can cause paranoia, seizures and persistent psychosis in rare cases, though Minty says that’s typically the result of combining DMT with another drug, such as synthetic cannabis, or pre-existing mental conditions — he’s tripped three to four times a week (and sometimes even more) for the last year and has “never felt better.”

Ultimately, Minty says, combining the two is “very serious business.” He’s been sent far into the ether quite a few times and urges anyone who attempts the combination to do their research — good places to start are Minty and Rob’s YouTube channels — and to begin at lower doses. Moreover, there’s no guarantee that your experience will mirror Minty’s. Now, let’s get into his trip.

The psychedelic visuals were particularly overwhelming, so I felt relieved when they began to calm down. As I became more relaxed, a question seemed to be placed into my consciousness: “Would you like to see the Realm of Love?” This sounded good to me, and the gyrating geometrics instantly vanished into a palpable, infinite blackness.

From the blackness, new visuals, which massively exceeded the beauty of anything I’d previously seen, slowly emerged. It was like witnessing the universe perform a perfectly-timed dance of love and benevolence. Somewhere amid this stunning vista, I was made aware of a presence that words would fail to describe. It was immensely powerful and radiating the purest form of love at an unimaginable intensity.

Up until that moment, I had an idea of what “love” meant, but it was suddenly defined for me in excruciatingly beautiful clarity. This incredible presence seemed to know everything about me — all the hairs on my head, my darkest secrets, every last thought in my mind — but it loved me because of these things. Feeling the colossal intensity of this incredible love, I was well aware that my life would never be the same. It became obvious that I was falling way short in almost every aspect of my life, and I instantly became determined to drastically reform.

I started thinking hard about how I could improve my game, mulling over grandiose schemes, like starting a fundraiser to build a hospital. But to my immense amazement, the presence said, “There’s no need for anything like that, Minty. Small steps are fine. A little at a time is perfect.”

It added, “Look, mate. I never get my hands dirty building hospitals. I stick to what I’m good at, which is loving folks.” I was flabbergasted that the presence had a brilliant sense of humor.

Then, suddenly, I was endowed with deep revelations about people in my everyday life, particularly Mrs. Minty. We’ve been together for years, and like most couples, we’ve had to work hard at our relationship. But I was being shown a completely different side of her — I could see her energy as a crucial, beautiful part of the universal patterns that were still in view. Her incredible personality was plain to see. She’d given up her life, dedicating herself to my well-being and rescuing me from my inexcusably selfish ways. All she’d wanted in return was for me to be happy and return a tiny bit of love, something I’d seldom, if ever done.

But before I could feel remorse, it was as if I was being shown many simple acts I could do to improve things. I could see myself complimenting her hair, leaving romantic notes and listening intently to her stories, despite having heard them thousands of times. In turn, I could feel her happiness growing. I couldn’t wait to get started.

This was when the visuals started to fade, but the experience was far from over. I then had an aerial view of my neighborhood, and I was being shown the residences of people who were suffering from loneliness or a lack of friendly interaction. I barely knew some of these people, but I could feel in perfect lucidity what it felt like to be in their circumstances. It was utterly heartbreaking, and I couldn’t believe how anyone could live such a lonely, painful existence.

One of those people was Elsie, who’s in her eighties and widowed. Until then, I saw her as a merciless, non-stop talker of monotonous trivia — someone who was best avoided. But now, I could see the stunning elegance of her personality sparkling like a diamond. It was insanely obvious that her dignity had been eroded by many years of withering loneliness. It became apparent that her eccentric behavior was her way of relieving that agony. I was devastated, and again, I couldn’t wait for the trip to end so I could go out and make a difference.

It was 3:30 a.m. At this point, 47 minutes had passed since my experience began, and the trip was rapidly fading. I had the urge to rush in, wake Mrs. Minty and express how much I loved her. Instead, I grabbed a few pencils and made her a card. Although crude, it sparked a delightful smile from her that morning. 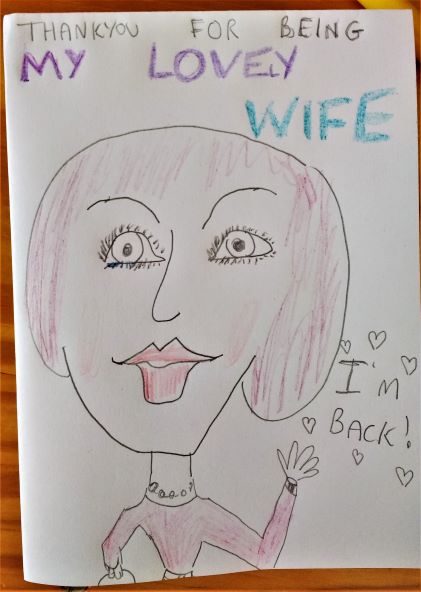 It was several weeks before I could function properly in the real world after that trip. I made every change I was shown in that incredible realm. The constant challenge now is showing the same love and benevolence to every person in my life that I was shown by the presence during that life-changing trip.

But, is this experience relevant to me alone? I don’t think so. I have an unshakable belief that you, I and every being has the same presence in us. If you don’t experience this through DMT, then who knows? Maybe it will show itself when your short time on Earth has come to an end.