The YouTubers Who Destroy Their Suits to Get You Off

You can’t wreck your boss’ Armani suit, but you can watch it happen to someone else

It usually starts with the tie. After the male guide-slash-model puts on a new pair of slacks — the final piece to a besuited look that includes a dress shirt, black dress shoes and aforementioned blue tie — he leans over an orange bucket of muddy, dark-colored glop. Next, he dips the tip of his tie into the substance. He submerges it further, a move resembling sexual penetration. He then lets the dripping tie graze his crotch over and over again, painting his pants and visible bulge with the slop in the process.

Things don’t stop there either — he spoons more of the sludge onto his chest and socks and pours huge ladlefuls of it onto his pants and sleeves, smearing it around until he’s completely covered. After pouring the rest onto his shoes, he sticks the bucket over his head to ensure that none of the goo goes to waste. Finally, he showers it all off.

This is one of many similar videos made by the Suitbusters, three men in Northern Germany with nearly 6,000 YouTube subscribers. In “Finding Eggs,” for example, a man adjusts his tie and gets pushed into a chair. Against a backdrop of stained fabric, he’s steadily pelted with eggs, yolks sliding between his legs. Eventually, another man in a suit makes him kneel on the ground and begins messing him up further — dropping whipped cream on his back, stuffing his tie into a pudding cup and wiping a gooey dress shoe on his pants.

Meanwhile, in the poetically named “But Take Heed When Your Visitor Does a Mess,” two suited men sit in a shower and pie each other in the face, crotch and everywhere else to the strains of classical guitar. And in “Messy Session im Anzug,” a well-dressed man sitting in a tub pours a bottle of thick ranch dressing on himself and rubs strawberry yogurt on his chest and crotch as if doing a sexy skincare routine.

The Suitbusters say they first had fantasies like these in early puberty, but they didn’t seriously consider acting upon them until their 20s. Now, though, they’re delving into their fetish for all to see. Same for YouTubers such as SuitDestroyer, Wetsuitntie and Suitandpie, most of whom have been doing (and documenting) their messy suit thing for more than a decade. In fact, there are Suitbusters videos from the early 1990s, and Patrick, another messy suit fetishist and content creator, started photographing himself with a 35mm camera, developing the film via mail order because he feared judgment from in-person drugstore photo labs. And while others can make a pretty penny from original fetish content, their stuff is all available for free. “We have admirers and fans, but we do it for our pleasure, not to please others,” Patrick explains.

Many of their videos involve gunge, a British term for any sort of slimy, custard-y substance that’s usually dyed some sort of color. (The closest American equivalent would probably be the green slime associated with Nickelodeon.) Because “gunge tanks” at parties and on TV shows like The Paul O’Grady Show are fairly common in the U.K., some messy suit YouTube channels merely curate playlists of people being gunged or pied in the face in addition to original content.

“Nothing is too good, new or expensive to get gunged,” says Patrick, who estimates that he owns 10 suits, 40 shirts and a “wide collection” of shoes and ties. For their part, the Suitbusters say they own roughly 200 suits between the three of them. Patrick selects suits “on their shine, fit and how they’d look coated in something,” but he also has thrift-shop finds that can get more thoroughly wrecked with paint and oil. (The Suitbusters claim their suits can usually withstand a couple of mess sessions followed by cleanings, provided they’re not “going too hard on them”; obviously, though, sometimes total destruction is the point.)

Speaking of oil, for his next big performance piece, Patrick is planning to get suited up and climb into a vat of used restaurant oil. “I can get carried away with my fetish, but I’ve learned to build up to an event,” he says. “Plan it out. Don’t rush or be rushed. Enjoy it.”

Not every concept is so extravagant, though. Some original videos are much simpler — a la this Suitbusters clip of a man dousing himself with a garden hose, or this one chronicling a pants-wetting experience on a country road:

Beyond the fetish and kink aspects, it’s easy to see the allure of a man whose suit has been ruined. Guys in fancy threads tend to be rich and powerful, so there’s a specific type of satisfaction that can be gleaned from turning such a figure into a gloppy mess. Or at least living through such glop vicariously. That is, you can’t wreck your boss’s Armani suit, but you can watch it happen to someone else. As such, channels like SuitDestroyer have videos where their subjects are explicitly referred to as CEOs and business executives. “A powerful, authoritative figure cut down to size by a pie to the face that slides down the suit [and] stains the fine fabrics is a drug,” Patrick says. “I’m truly addicted.”

There are bigger communities for men with more general suit fetishes — no, not the suit porn found in GQ, but suited men having sex of all (pin)stripes — but Patrick says they don’t always see eye-to-eye with those who prefer their suits messy. “It’s a bit of a taboo,” he says. “You either get it or you don’t.” (If you’re hot and bothered by someone covered in dirt, food or slime, you’re more broadly a part of the “wet and messy,” or WAM, community. In her fetish-centric book Deviant Desires, Katharine Gates writes that some of the first messy fetishists “to go public” were two gay male communities that emerged around the 1980s — an American group called Sludgemaster and a British group called SLOSH.)

Patrick adds that most of his friends in the messy suit community live far away or have incompatible schedules, so they mostly talk online. Despite the distance, though, the Suitbusters say they’ve gotten to know at least a small group of likeminded people throughout Europe, some well enough that they’ve spent holidays together.

But at the end of the day, their true bliss comes from fucking up formalwear. Or as Patrick says, “There’s nothing better than sitting at home in a favorite suit stuffing a Pizza Hut pizza down your trousers or pouring wine over the jacket.” 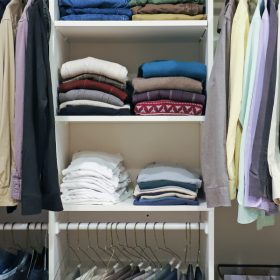 Is There an Exact Number of Clothes I Should Own?