On YouTube, Steve1989’s food reviews are as soothing and poignant as Bob Ross

My dad’s first encounters with American food came in the form of a forest-green can, stamped in English that he barely knew how to read. It was a U.S. Army C-ration, purchased discreetly from a market that served the soldiers at the Korean Army’s Seoul headquarters.

It was against the rules to resell military goods for cash, but nobody seemed to care. It was Seoul, circa 1965 — a time when the scars of a long, savage Korean war were still visible, even with the economy and landscape in full rebuild. South Korea’s mandatory military service rules meant that every 18-year-old man had to hit pause on life for three years. Being an only child, my dad received a shorter stay of 20 months and ended up pushing paper in an administrative office after going through basic training.

He couldn’t tell me what work he did during that time, but the C-rations he ate are burned into memory for life. “My favorite was beef stew, or the frank and beans in that orange-colored tomato sauce. It came with crackers, some hard white bread, these rock-hard discs of chocolate and powdered coffee,” he recites over the phone. “Oh, and the best part: American cigarettes.”

My dad had tasted these strange and alluring canned goods for the first time in middle school, and it captured his imagination about life beyond Korean borders. The C-rations were a brief but delicious respite from the white rice and soup that formed every meal in the mess hall, and thankfully, American soldiers were happy to trade for packs of instant ramen. Every Korean remained anxious about the lasting effects of the war and military occupation, but amid the stress, swapping food and culture remained a silver lining for young men like him.

“You have to understand, it wasn’t like how Korea is today. There weren’t American restaurants, imported packaged goods or ‘Western’ culture. What we knew of America, we knew because those boys fought with us,” he tells me. “Other than meeting good people, experiencing that food was one of the few highlights of military life for me.”

I can’t help but feel some of his excitement for a can of frank and beans when I watch the military food reviews of Steve Thomas, aka Steve1989MREInfo on YouTube. I first stumbled across his channel while searching for videos of pro-Iran protests in Baghdad and other unrest in the aftermath of the assassination of Iranian General Qassim Soleimani. For some reason, the YouTube algorithm must’ve sensed my rapidly increasing trepidation about World War III. And in a poetic way, Thomas’ videos have served as the perfect antidote.

Thomas most frequently reviews modern MREs (Meal-Ready-to-Eat), and he speaks with a soft, patient cadence punctuated by wholesome ad-libs like “neat” or “wow.” There’s an element of relaxing ASMR that kicks in, given there’s no background music in his videos, only the natural sounds of, say, a biodegradable plastic spork clinking in a cup. Given that, the whole production feels extremely Bob Ross-ian, especially when Thomas speaks with hushed, anticipatory excitement, as in a review of a Korean ration with rice, sausage and cooked kimchi.

“That has a terrific, mouth-watering, vinegary smell. I have to try this immediately,” he says, peering into a silver package of kimchi before spearing it onto a fork.

He takes a bite.

“Mmm… the cabbage is spicy, salty and tangy. This is the way to do it. All that flavor, I’m not wasting a bit of that,” he says, pouring the rest onto the rice. “It has great kick to it. Just start adding layers. Try a little bit at a time. This is a food experience!”

Thomas has tried rations from more than 20 countries, and what I love most is that these packaged meals reveal not just national tastes, but often the budget and even potential morale of a fighting force. For all its international might, the U.S. military often gets pragmatic, middle-of-the-road food (with respect to the legendary pepperoni pizza). It’s often a significant contrast from, say, France or Spain, which feature relatively exotic treats like liver paté, squid in ink sauce and sardines.

There are also some horror shows here, like the infamous Chinese rations (at least one of which has made Thomas sick) or the forays into truly foul vintage rations, as in his viral opening of a 1969 Vietnam field meal. But, for the most part, the draw doesn’t appear to be the gross-out factor, at least surveying the comments. It’s a mixed audience of mostly civilians and a healthy sprinkling of active and retired military members.

The issues of war don’t often make for wholesome conversation, so I’m struck by the way a focus on food allows people to revel in shared experience, rather than in opposition. “I’m Spanish and I love how you reviewed this! Looks like an alien in a Spanish kitchen making a documentary out of what the mother does,” as one person remarks. “All [these] are very usual dishes that every mom would like his son to eat while in combat.”

Thomas never served in the military, but a casual obsession over military rations has become a full-blown gig in the last few years. He has nearly 1.5 million subscribers, with more than 200 million views since starting the channel in 2015. He’s by far the biggest name in a small squad of MRE reviewers online, and his calming presence has inspired fans to say his ration reviews are everything from “therapeutic” to “addictive” to “blissful.” He’s got signature sayings that are now basically memes for fans, including the observation of a “nice little hiss” when opening a can or the all-important phrase, “Let’s get this out on a tray. Nice!”

Thomas didn’t respond to my requests for an interview, but in a short 2017 GQ interview, he noted that one of his biggest motivations for collecting and reviewing rations is to rebuild “displaced history.” He won’t taste a ration unless he also has an unopened duplicate to save in his growing archive of shelf-stable food. He also collects stories, as with that of an octogenarian South Korean war vet who recognized the candy-coated gum shared with him by an American GI during the Korean War. “I’ve seen things I’ve paid good money for just get thrown out,” he said.

It’s those stories I fantasized about as a little kid, when my dad and I would go to the Navy PX or the military surplus store to pick up MREs. We always kept a few in our hurricane kit (since it is Hawaii), but we had a habit of busting into the stash. Though his service was short, the culture of mandatory service imprinted into my dad’s national and personal pride. He shared it with me via the small magic of sticking a mushy plastic pouch of unidentifiable food into another plastic bag, adding a little water to it, and watching as a chemical heating pad boiled the water and warmed the pouch. The steaming beef stew and chili that spilled from that pouch was delicious in the same way that a mediocre sandwich can seem revelatory when eaten on a picnic blanket during a glorious summer afternoon.

It wasn’t about ingredients, or seasonings, but rather the myth it told of a moment in time. Sticking a brown spoon into that pouch of mush was the act that tied me to a soldier 9,000 miles away — the same soldiers I saw on the nightly news, huddling behind a sandstone wall with their rifles and eyelashes caked in the dust of a strange desert.

I marveled at how quickly my dad could put down a beef-stew MRE, but it’s probably the case that every young man who gets screamed at in basic training learns to eat an MRE a little bit quicker. The ration is the perfect encapsulation of the banality of day-to-day life in a war zone, replete with the tricks needed to cut repetition and boredom, which is why recipe hacks are numerous, signature and coveted in the armed forces (a typical creation I found on Reddit: the “Reese’s cake,” made by mixing hot chocolate powder with peanut butter, then spreading on top of an MRE pound cake). 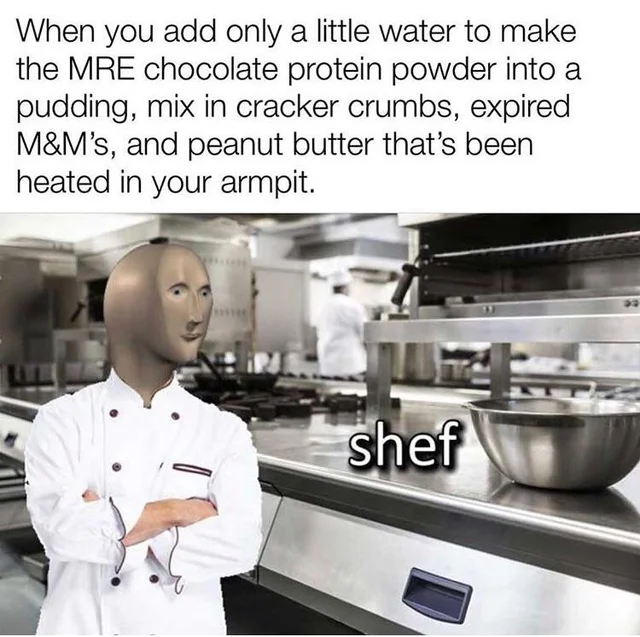 It’s also no surprise that bartering with rations remains a military mainstay. A packet of jalapeño cheddar spread is coveted like liquid gold; the rattle of M&Ms has the allure of real coin. Allied forces often trade items with each other, just as my dad and his father (a lifer in Korea’s military police) once did with American GIs. An MRE can even be a crucial tool when put into the hands of an enemy fighter who is battling while malnourished, Navy hospital corpsman Tim Kirkpatrick noted in a blog for We Are the Mighty.

“In many cases, Taliban and ISIS fighters have quit their posts due to hunger. When allied forces leave the wire for a short amount of time, we tend to bring the tasty snacks that come in the MREs, like the almond seed poppy cake or the First Strike Bar, to enjoy during a security halt,” he wrote. “When we come in contact with a potential bad guy who looks like they haven’t eaten in days, handing over the sweet cake could gain trust and lead to the whereabouts of a nasty IED before it goes off.”

The modern MRE is the distillation of military might, and the technology behind both rations and military nutritional science has shaped literally how and what we all eat. But watching MRE reviews as the country stumbles its way into more foreign conflict, endlessly, does remind me that the burden of policy moves is shouldered by a bunch of kids who are hungry as hell and trying to make the best of orders in a far-off land. Given the massive military-civilian divide that exists today, maybe this is a good thing.

I’m writing these final paragraphs amid bites of MRE chili and beans (my dad’s third-favorite MRE meal) with a sprinkle of the generic crackers that came with the entree. I bought it at a military surplus store, although I confess it’s an unfamiliar civilian brand rather than the brown Wornick packs I grew up consuming. There’s no real whimsy or excitement for me now — that’s what the Bob Ross-like video reviews of exotic rations are for. Instead, as I chew, I wonder which soldier was the envy of his squad tonight for having the revered “chili-mac” meal. I wonder where in the world they are, and if they survived. And I wonder if they’re dousing their shit in hot sauce, just like I am, here in the warmth of my apartment.