If you want a neat, tidy distillation of America’s racial divide — a sober, measured movie that offers a straightforward narrative and clear-cut solutions — then you probably shouldn’t watch a Spike Lee joint. Since the mid-1980s, this landmark director has resolutely made his kind of movie, which tends to be messy, angry and cathartic. The societal ills he’s chronicled in everything from Do the Right Thing to BlacKkKlansman are systemic and seemingly intractable, but that’s not going to stop him from railing against them, preferring a cannonball to a scalpel. To love him is to forgive his indulgences — recognizing them as part and parcel with his brilliance and wit. Just as Lee is in person, his movies churn with ideas and energy, proudly uncontained. There’s nobody like him, and I wouldn’t trade his films for anything in the world.

His latest, Da 5 Bloods, is very indicative of his warts-and-all approach, a description that’s both a recommendation and a warning. This 156-minute drama about four old friends returning to Vietnam to exorcise some demons (and also maybe collect some treasure) is too long, too scattershot, sometimes hokey and often powerfully frustrating, cycling between genres with reckless abandon. But it’s also frequently incredible, and even when it’s not, the film pulsates with emotion and purpose. Lee doesn’t always make his points clearly, but he’s got much to say.

The film introduces us to four aging Black Americans who have arrived in Ho Chi Minh City: Paul (Delroy Lindo), Otis (Clarke Peters), Eddie (Norm Lewis) and Melvin (Isiah Whitlock, Jr.). These guys haven’t seen each other in forever — and it’s been a long time since they were in that part of the world fighting the Viet Cong. Their reunion is warm — plenty of hugs and daps — and for the briefest of moments, Da 5 Bloods almost resembles one of those nostalgic Last Vegas-like pictures where a bunch of distinguished actors ham it up in some scenic locale. But these guys aren’t in Vietnam for fond reminiscences: They believe there’s a possibility of finally retrieving the bones of their fallen squad leader Norman — as well as the billions in gold they found during the war and buried.

If that sounds a bit like The Treasure of the Sierra Madre, Da 5 Bloods also has other movies in mind. (And I’m not even talking about the film’s infrequent references to Apocalypse Now, which tend to be distracting rather than sly.) In flashbacks, we return to the Vietnam War as the self-named Bloods — including Chadwick Boseman as Norman — get involved in tense firefights. We see how they uncover the gold, how Norman was these men’s spirit guide, and also (possibly) what happened to Norman. Those war-film flashbacks are intercut with scenes in present-day Vietnam as the four surviving soldiers (as well as Paul’s son David, played by The Last Black Man in San Francisco’s Jonathan Majors) go deep into the jungle, with adventure and danger awaiting them.

Along the way, the men will also recount their war experience and the emotional scars it left them with. There are also a couple love stories, some political commentary, even an elaborate shootout. With Marvin Gaye’s Vietnam-era classic What’s Going On serving as its soundtrack — its songs of racial strife and societal unrest as potent then as they are now — Da 5 Bloods seeks to connect the struggles of the past and the present.

Lee needs his long running time for all these different plot strands, but it’s also so we can get to know these men. But slowly, it becomes apparent that the focus will be on Paul, who emerges as a tragic figure, played beautifully by Lindo. All of these former soldiers experienced derision when they returned to the States — besides Vietnam being an unpopular war, their skin color made their transition back to civilian life even harder — but to his friends’ horror, Paul has become a profoundly troubled person. Sure, there’s the MAGA hat he defiantly wears, but he’s also hardened, as if he lost something in Vietnam that he’s never been able to reclaim. Da 5 Bloods often movingly depicts the plight of Black soldiers, who were sent to die in a senseless war while their friends and loved ones fought for equality back home, but Lindo really makes his character’s pain and PTSD resonate. Coming back to Vietnam has reinvigorated part of Paul, but it’s also brought all of his demons frighteningly to the surface. 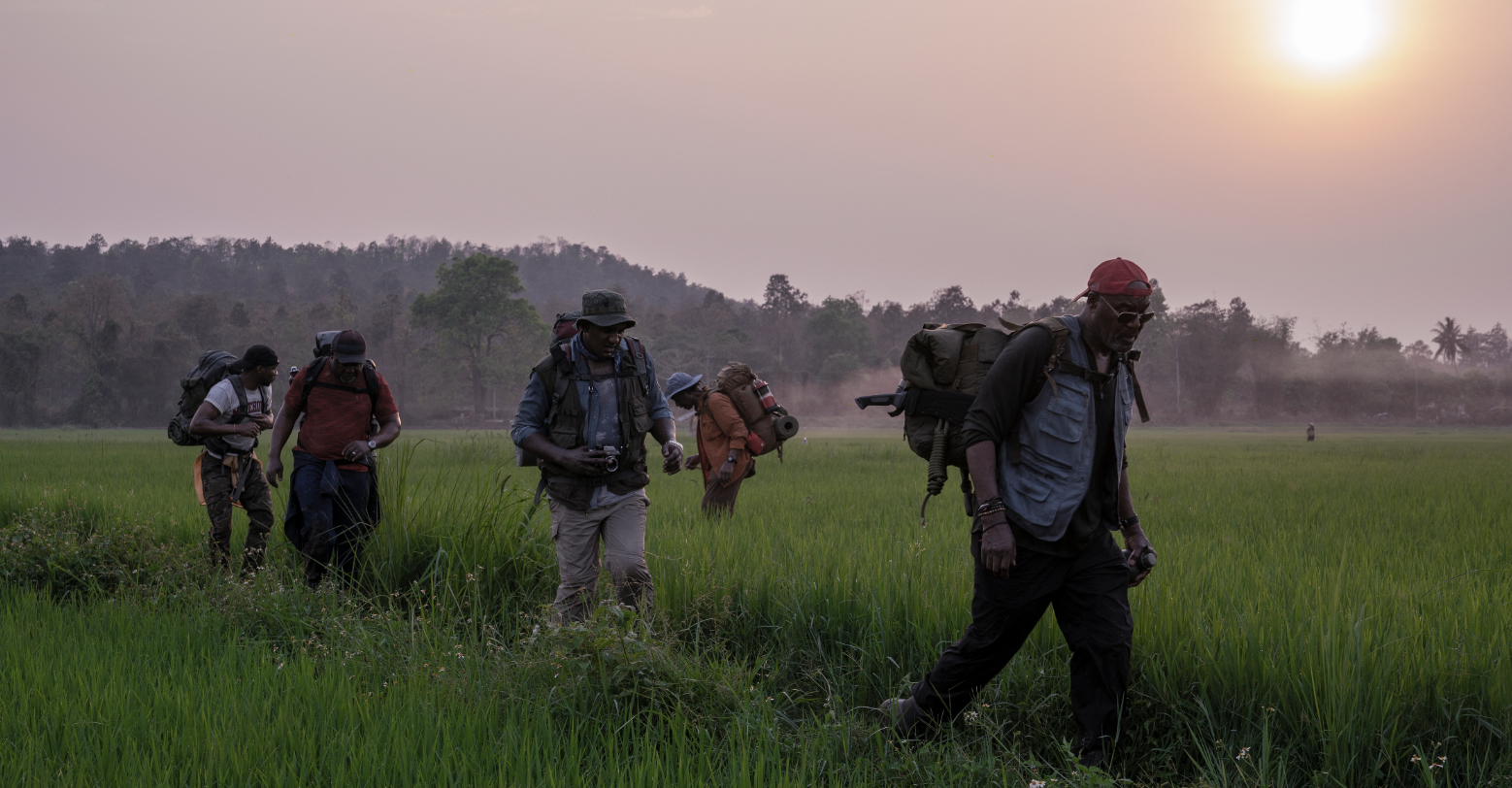 This isn’t the first time Lee has made a movie about Black veterans, seeking to correct a historical (and Hollywood) record that too often suggests that America’s wars were fought only by valiant white men. Like the 2008 World War II drama Miracle at St. Anna, Da 5 Bloods can feel overextended and unfocused, as if Lee felt such a responsibility to provide that counter-narrative that he made sure to include everything he could think of. (Clips of Muhammad Ali discussing his refusal to serve in Vietnam and Carlos Smith and Tommie Smith’s Black Power Olympics protest are interwoven, alongside images of actual Black war veterans.)

But what helps make Da 5 Bloods the superior film is that Lee’s perspective is far more nuanced and questioning. Da 5 Bloods illustrates the racism that Black soldiers faced at home and abroad, but it’s also wise about the ways that the definition of marginalized changes from place to place. Once the Bloods try tracking down the gold, they’ll discover that other parties are also interested in it — including local Vietnamese who, not unreasonably, argue that it belongs to them because of the atrocities that American soldiers perpetuated on innocent women and children. As much as Lee sympathizes with his Black soldiers, he understands how that war caused nothing but sorrow for people on both sides of the conflict.

And the movie is also incisive in examining the crushed idealism these soldiers once possessed. When the Bloods go on their quest, they’re trying to acquire the riches they think is due them, but what exactly does that mean? In flashbacks, Norman implores his countrymen to use the gold to help fund the liberation of Blacks in America, but in the present, the Bloods are divided regarding whether such a thing is even feasible. Maybe it’s better if they just take care of themselves? Saintly Norman’s death is portrayed as a death of the hope that maybe African Americans could one day achieve a more equal society. In the age of Trump, Lee seems both enraged and distraught that such hope feels farther away now than it did 50 years ago when these young men fought in Vietnam.

Da 5 Bloods offers no easy answers, which is why it’s disappointing that Lee sometimes leans on melodramatic plot twists and hacky movie conventions to resolve his film’s conflicts. And yet, the film’s volcanic spirit holds you in its sway. Much like Paul, who’s guided by his most volatile urges, despite his friends and his son’s desperate pleading, Da 5 Bloods barrels forward, taking on too many side characters and subplots, all the while powered by its fury and disillusionment. But even when the movie falls short, Lindo keeps you locked in — he brings vibrant urgency to Paul’s sorrow and anguish.

Paul and his buddies return to the jungle seeking closure and loot, but in Da 5 Bloods all they find are the lingering hardships that have visited their lives in Vietnam and back home. Lee’s movie is as messy and tormented as the Bloods, who are now old enough to see the scourge of unchecked racism and senseless wars repeat over and over. There’s nothing neat or tidy about that.