A Beginner’s Guide to Sion Sono, the Outrageous Japanese Auteur Behind Nicolas Cage’s Most Outrageous Performance

The ‘Prisoners of the Ghostland’ director has a long history of making movies that elicit fear, horniness and contemplation in equal measure

Many viewers will probably wonder who could come up with such an unhinged cultural mishmash, but for those aware of the film’s director, Japan’s leading offbeat auteur Sion Sono, none of that would be the least bit surprising.

First gaining recognition in 2001 with the cult J-horror film Suicide Club, Sono is a punk filmmaker who’s made more than 20 features and miniseries in the time since (in 2015 alone, he had five feature films open). He tells stories about outsiders and the disadvantaged using surreal narratives, vibrant colors and visuals always somewhere between decadence and obscenity. Taking from his background as a poet, Sono creates elaborate situations to convey symbolic meaning about the culture we inhabit. And while he’s never constrained by genre, he loves to make movies about making movies, violent crimes, kinky sex and women in trouble who happen to be named “Mitsuko.” 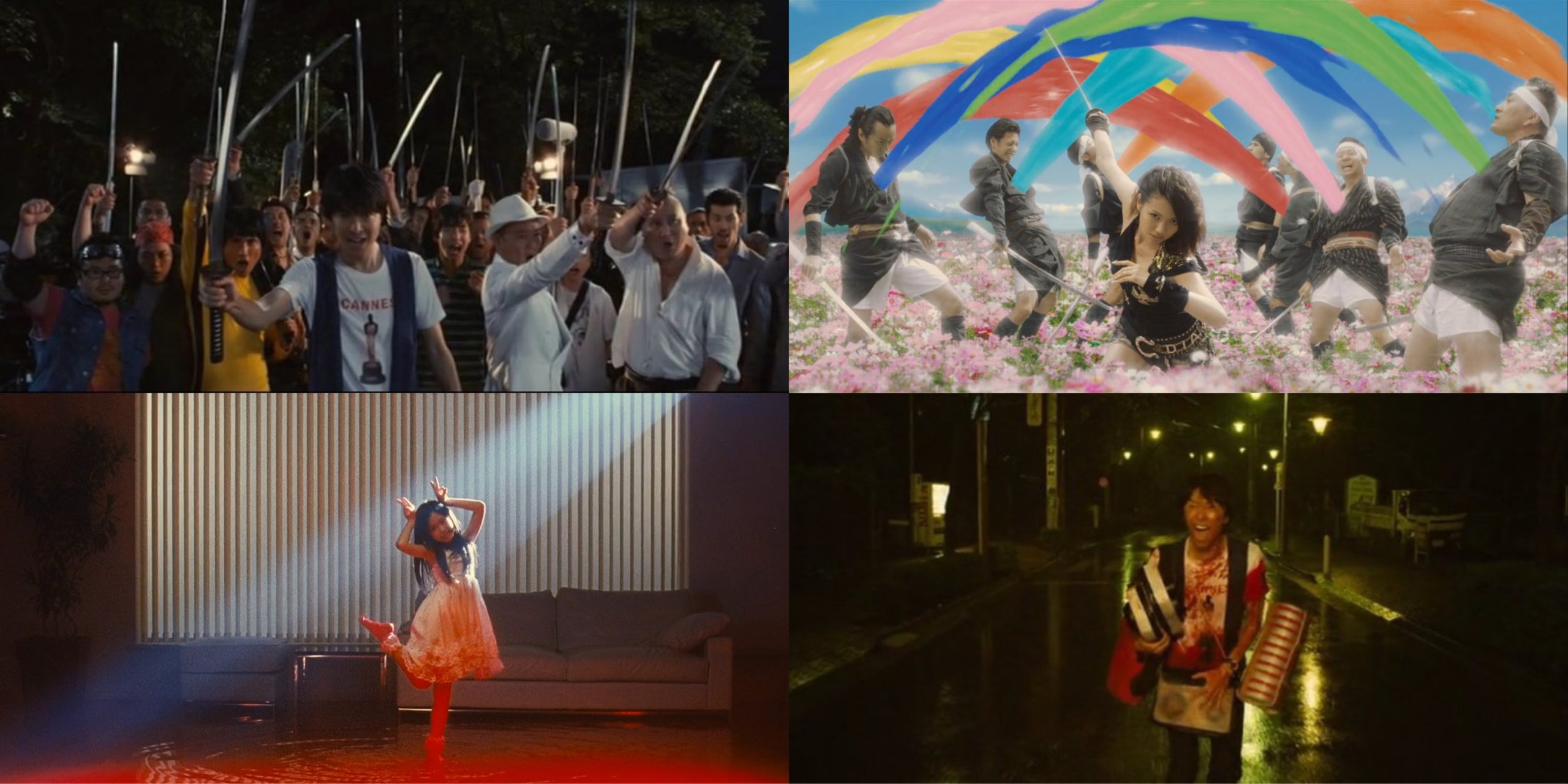 Two yakuza clans are at war with each other. The head of one family wants to make a movie starring Mitsuko, his hellraiser daughter. Mitsuko runs away and bribes some dweeb to help her escape her controlling father. Meanwhile, a group of young guerilla filmmakers called the Fuck Bombers have wasted 10 years of their lives waiting to make just one great film.

Why Don’t You Play in Hell? is a quintessential Sono flick because it’s a long smooth clusterfuck. For such a mess of seemingly unrelated ideas, the movie’s plot is remarkably tight as its three acts go from loud to louder to a deafeningly chaotic bloodsoaked final act. And the fact that Sono wrote the film’s original screenplay a full 20 years before he could get the film financed makes the final product all the more impressive and autobiographical, with the Fuck Bombers disillusionment with their art reflecting Sono’s own.

More than anything, Why Don’t You Play in Hell is about the joy of making movies, either because you care about your audience, because you want to make something you can be proud of or because you’re simply batshit crazy. 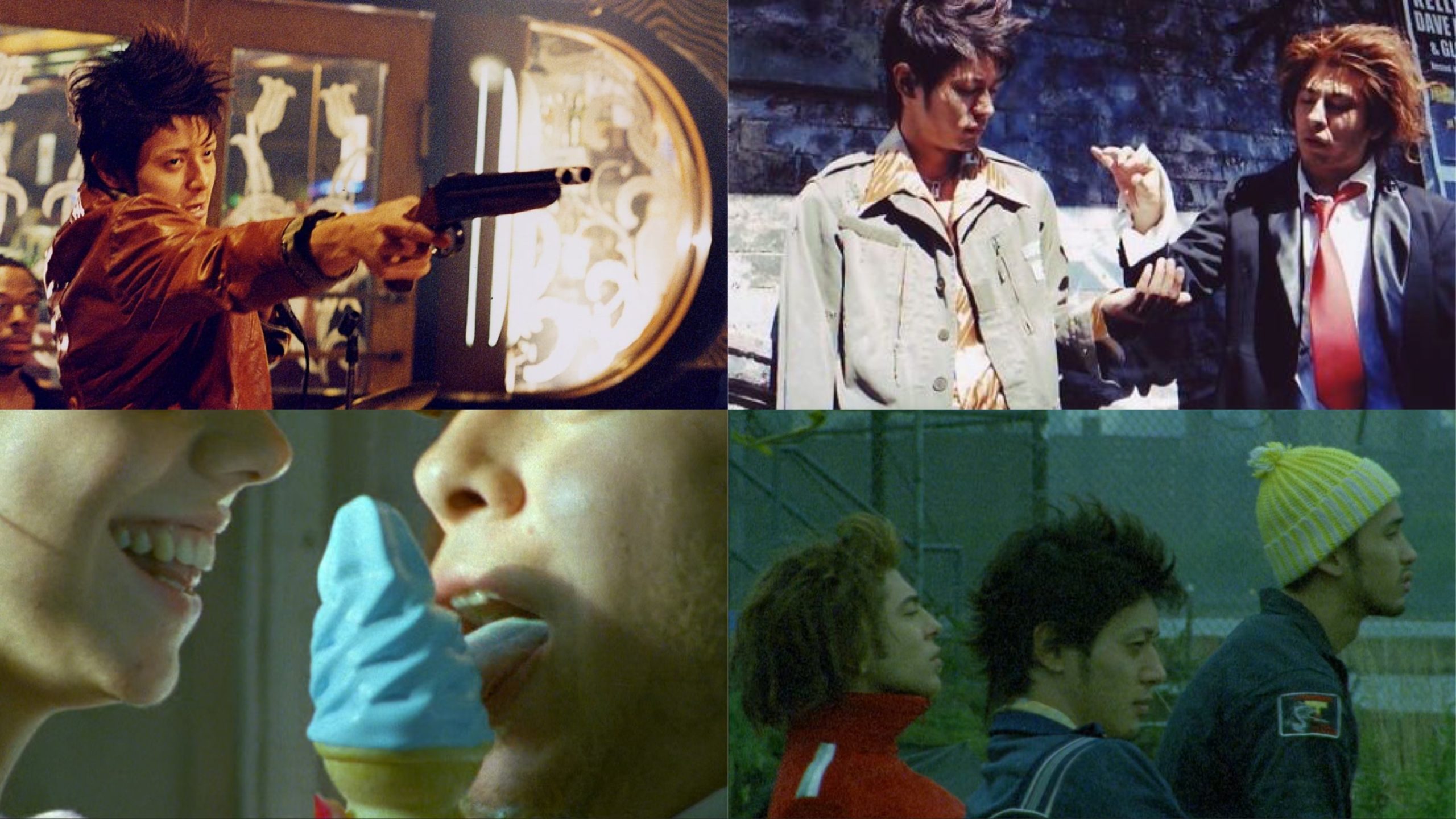 Shin is a Japanese university student who, feeling disconnected from his dreary life, runs away to New York City looking for “hazards.” After getting mugged, Shin links up with a pair of Japanese-American street punks named Lee and Takeda, and the band of friends commit crimes together, becoming hazards in their own right.

Shot on handheld in NYC with no permits, Hazard feels like a god-level student film made by a naughty little punk and is Sono’s first true American film. Influenced by the works of John Cassavetes and Martin Scorsese, Hazard feels like Sono’s half-improvised take on gritty 1970s crime flicks like Mean Streets, with those movies clearly influencing his decision to set it in a grimy lawless New York that didn’t really exist anymore at the time Hazard came out. Probably Sono’s most straightforward story, it has a sentimentality for men bound by cultural background and dangerous lifestyles and gives its rambunctious protagonists a surprising abundance of charm while providing zero backstory. 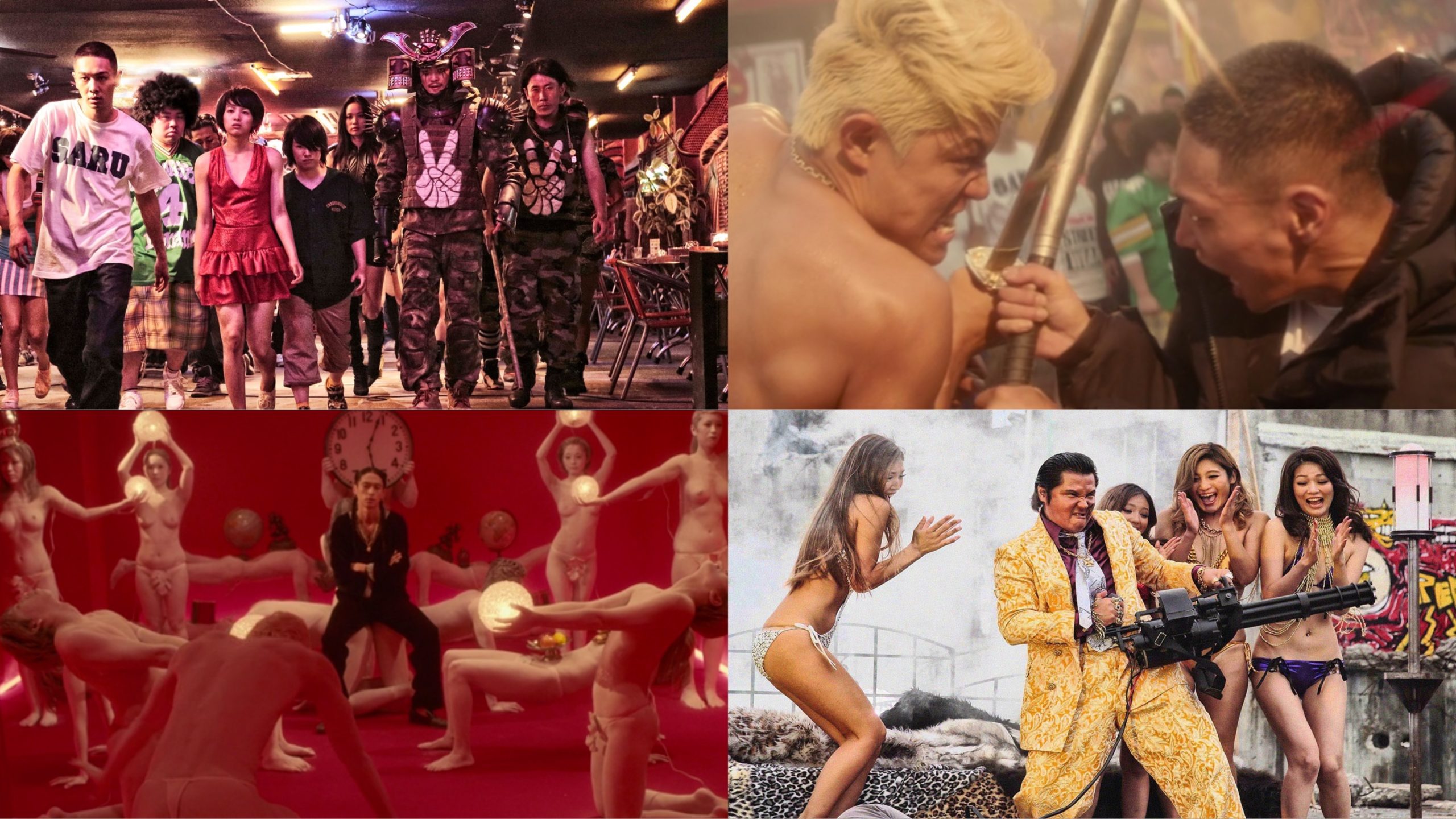 In an alternate version of Tokyo, heavily stylized factions run every district. On a night when the leader of a peace-loving gang is murdered, an all-out war breaks out that could destroy the very balance of the Tokyo Tribes. Also, everyone is rapping all the time.

Simply put, Tokyo Tribe is The Warriors if it was a Japanese rap musical. Full of martial arts, tanks and sexy human furniture, Sono creates an entire world here, with some of his most ridiculous production design yet. Tribe is more fun than thoughtful, and feels proud to be a balls-to-the-wall action movie that’s only moral is “dick size doesn’t matter.” 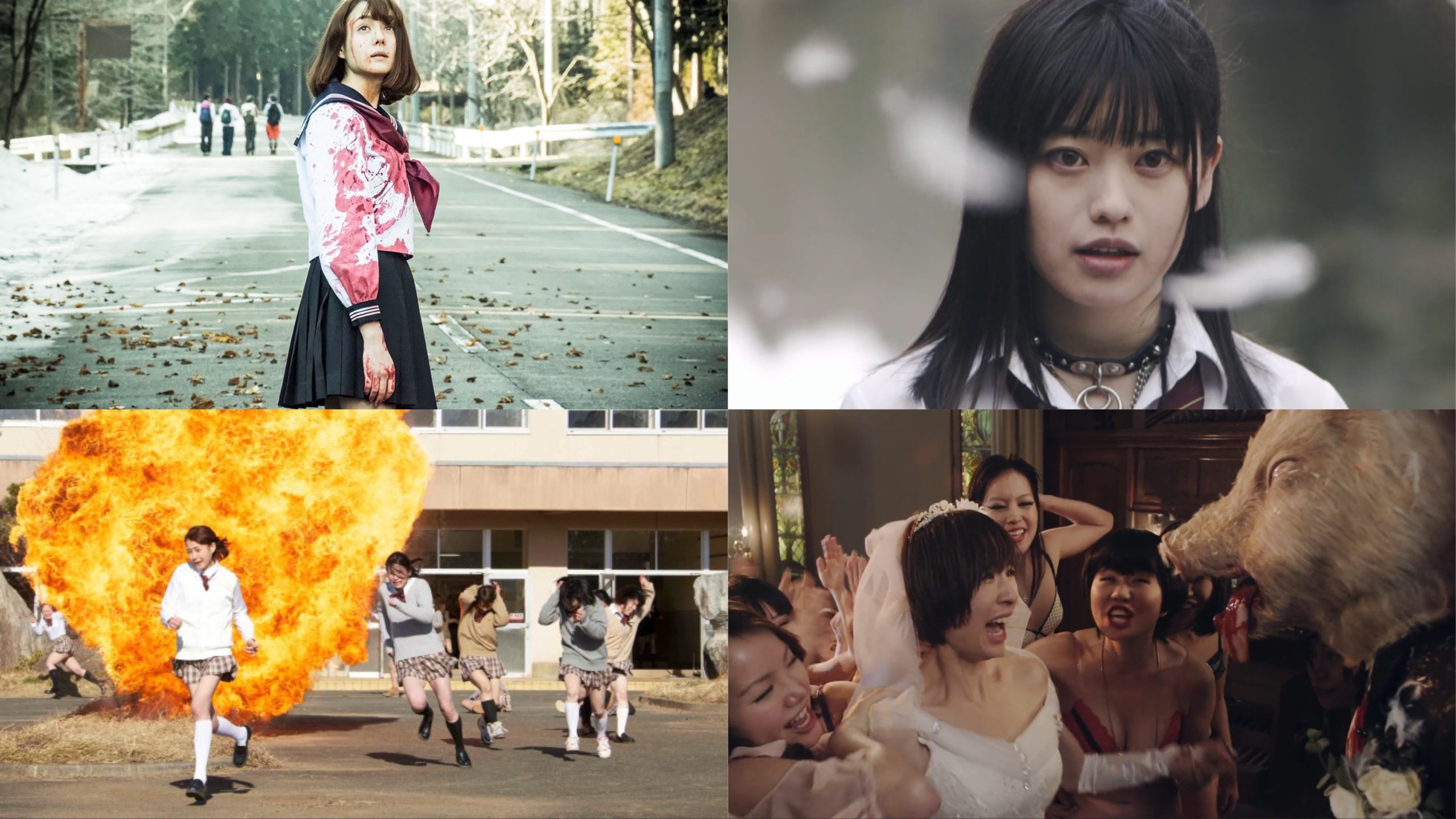 Mitsuko (no, not that Mitsuko) is a teenage girl who strange things keep happening to. First, other girls around her start dying in gruesome ways and no one notices but her. Then, suddenly, she’s a different person going through entirely different but just as grisly scenarios. Only her friends can help her through this reality-warping nightmare.

I’m trying very hard not to spoil this film for you because it has one of the most shocking opening scenes I’ve ever encountered. What I can tell you is that Tag isn’t a typical horror movie and is weirder than it is scary. Some parts are outright ethereal, others hilarious. As a story, Tag makes a lot more sense by the end, but along the way, it does a great job of parodying society’s disdain for and obsession with teenage girls in a bunch of bizarre splatter-filled vignettes. 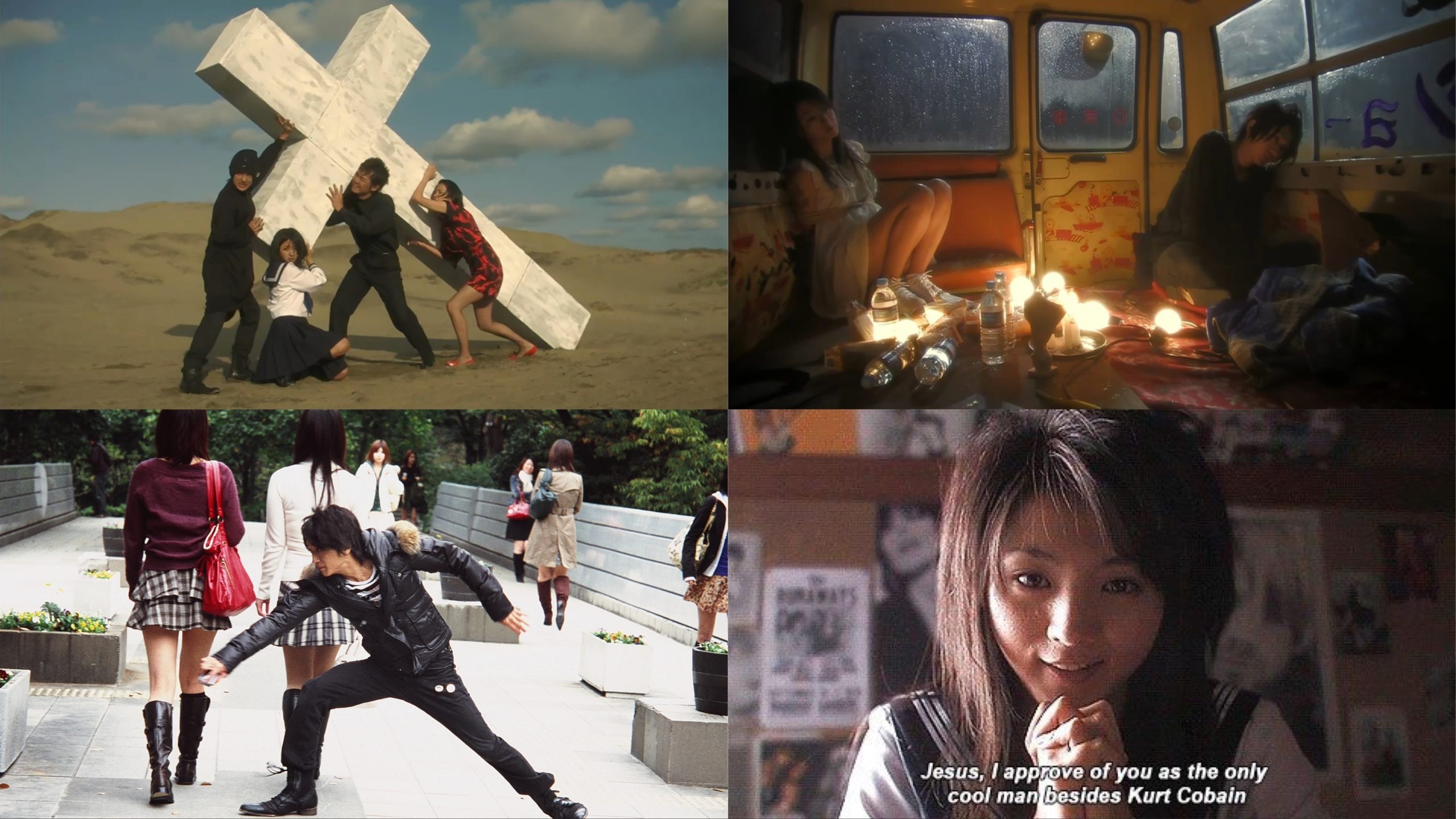 To gain the paternal attention of his strict Catholic priest father, teenager Yu Honda starts committing as many biblical sins as he can so he’ll have something to confess to his dad. When he realizes the most egregious sin of all is being a pervert, Yu becomes an unparalleled panty-shot photographer. But Yu’s voyeuristic tendencies are only religious, not out of lust but in search of absolution. He’s never had a boner before and swears he won’t until he sees the panties of his true love. But when he does find the girl of his dreams, it’s more complicated than he could ever imagine. 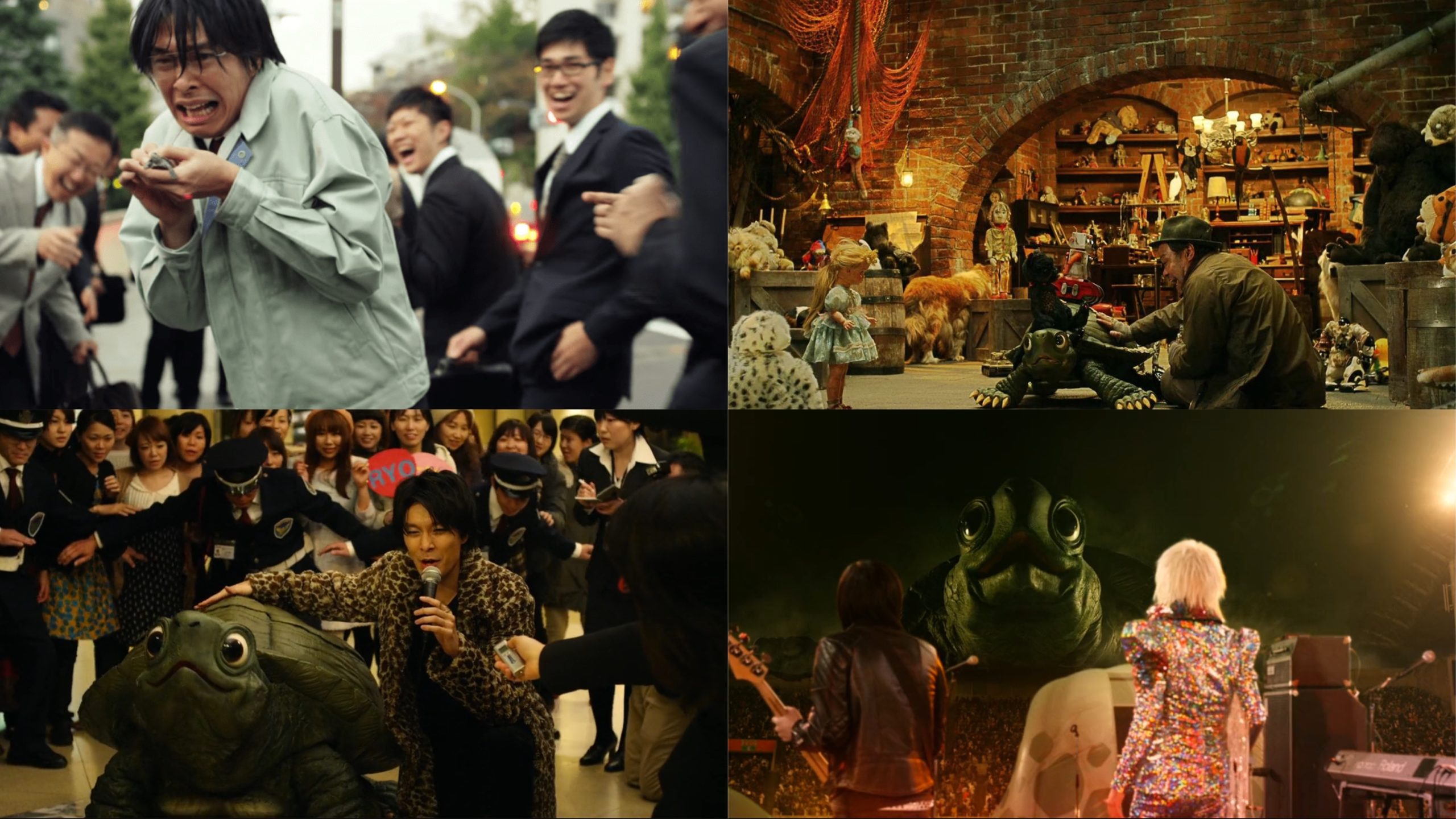 Ryoichi is a failed punk singer turned self-loathing office worker who is constantly bullied at work. He finds solace in the company of his pet turtle Pikadon (who he unintentionally named after the atomic bomb), until his coworkers push him to flush Pikadon down the drain. As Ryo’s wishes of rock stardom begin to come true, Pikadon grows larger and larger, with both of them becoming big enough to destroy everything around them.

Despite being the closest thing Sono has made to a family movie, Love & Peace is still full of his, for lack of a better term, weird shit. It somehow fits an anti-war message into a rock musical with a Godzilla-sized turtle. It also has a bunch of living toys, talking animals and doesn’t reveal that it’s a Christmas movie until halfway through. 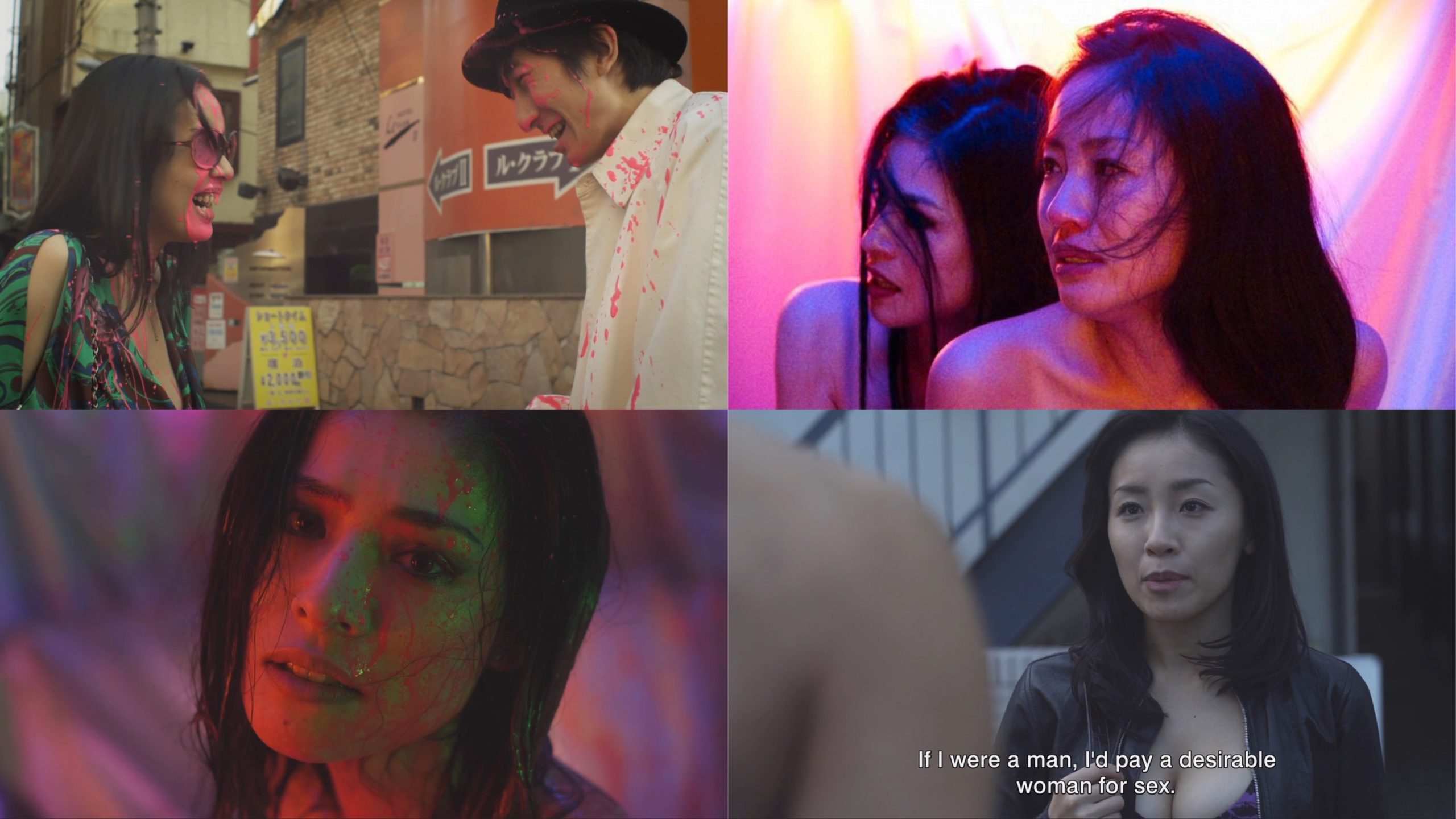 The story of three different women, embracing their sexuality in taboo ways while dealing with the misogynistic repression of the society they live in. Izumi (played by Sono’s wife Megumi Kagurazaka) is a housewife craving a sense of purpose and fulfillment outside of her sexless marriage to a romance novelist. Mitsuko is a literature professor living a double life as a sex worker who tutors Yoko on how to trade money for sex. Kazuko is a police detective having a kinky affair with her husband’s best friend. It all becomes more complex when the police find a dismembered woman’s body conjoined with a mannequin. 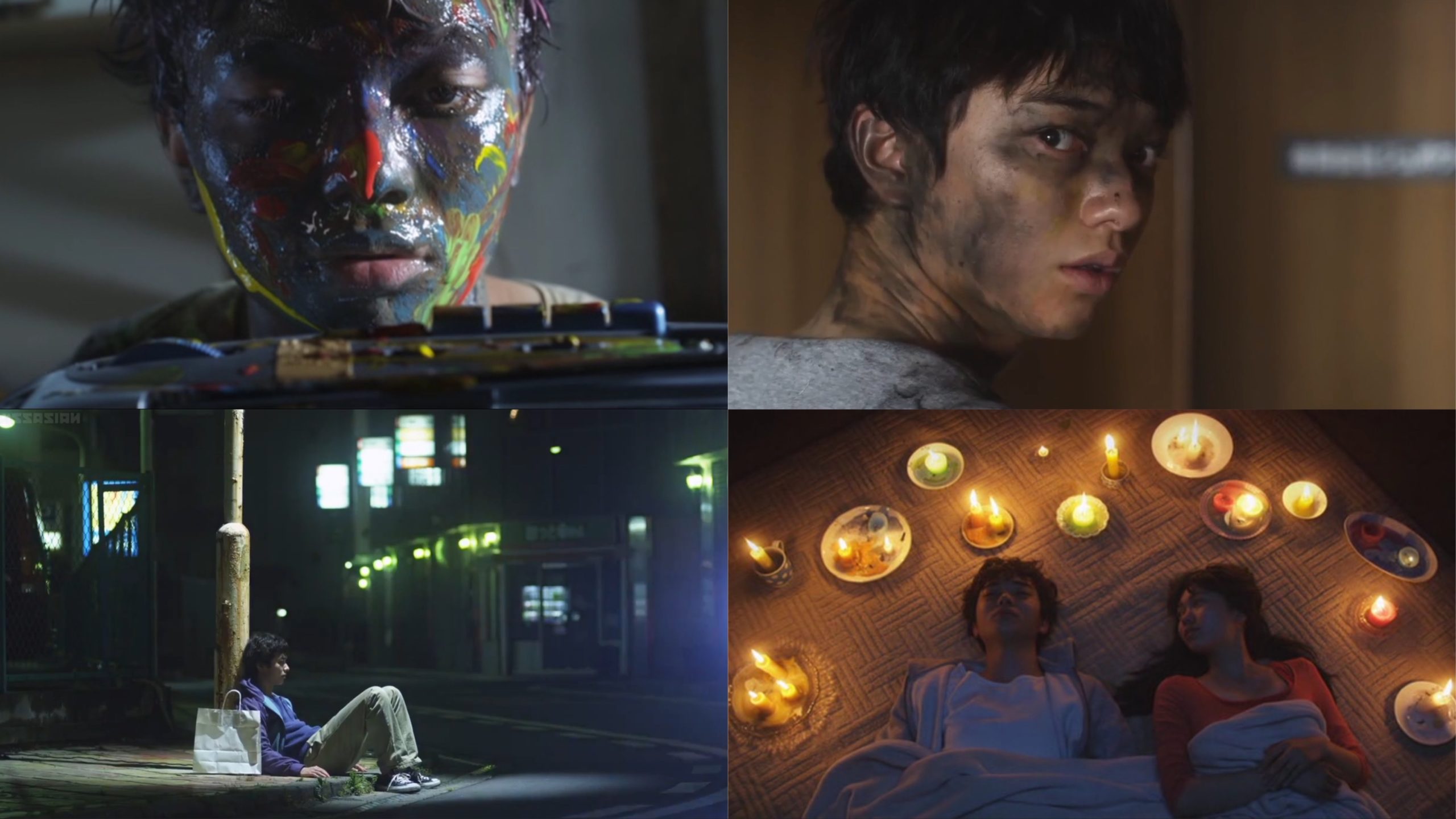 Fourteen-year-old Yuichi Sumida wants nothing more than to live an ordinary life and to become a respectable adult, but his plight — violent deadbeat dad, neglectful mother and living in the aftermath of the Tōhoku earthquake and tsunami — makes it impossible. One night after making a dreadful mistake, Sumida makes a vow to use what he sees as his worthlessness for the good of society by killing people he perceives as dangerous.

On top of being a better version of Taxi Driver than Taxi Driver, Himizu is the rawest coming-of-age story I’ve ever seen. I’ve read many times how deeply Sono was affected by the tragedy of the 2011 earthquake and tsunami, but I couldn’t really understand the enormity of it until I saw Himizu’s final scene.

And while Sono has returned to the subject a few times since, nothing else can touch Himizu’s heartbreakingly honest portrayal of what trauma — both singular and complex — can do to a young mind. How it makes you act. How it blinds you to your choices. Simple and almost understated, there isn’t any of the exposed skin or the provocative gore typical to Sono’s work here, but Himizu still feels like Sono ripped off a layer of dermis to show the pulsing bleeding flesh beneath. 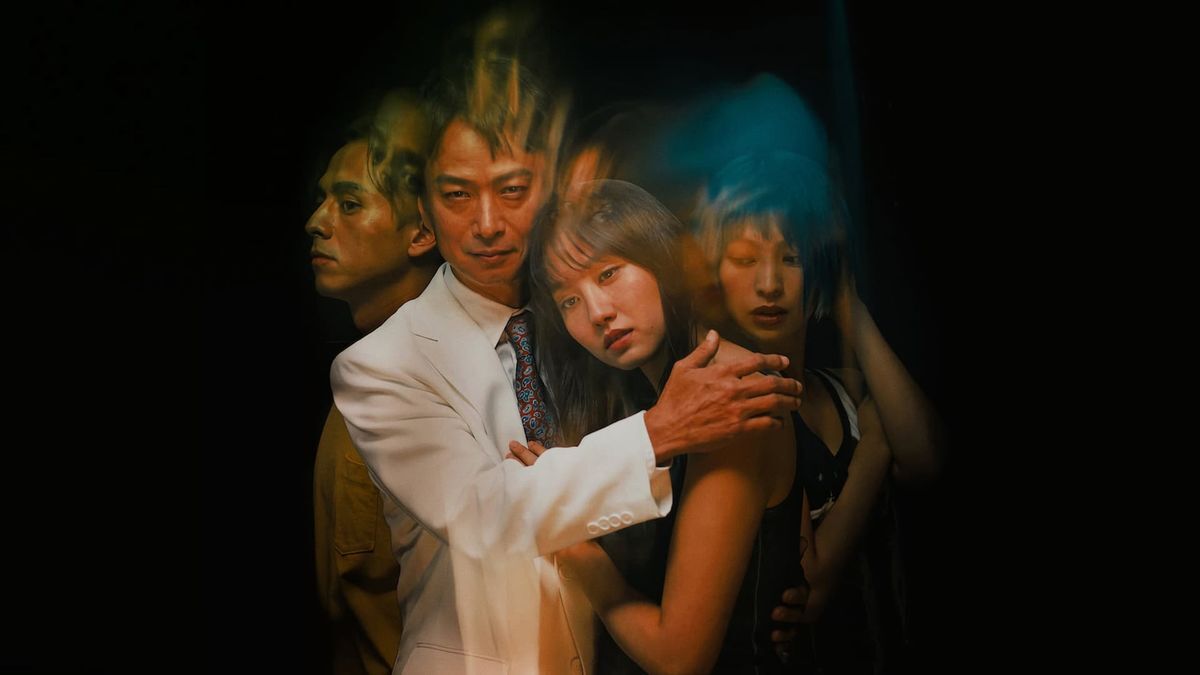 In 2019, Netflix released a two-and-a-half hour movie on Netflix called The Forest of Love. The film is another mishmash of half a dozen plotlines that all somehow coalesce into one story, following a group of joyfully suicidal lesbian schoolgirls, a serial killer, two friends (one is named Mitsuko) who can’t stop fighting over the men and women they’re romantic with, a ghost, a charismatic conman named Joe Murata and a crew of punk filmmakers making a feature film about how Joe Murata is the serial killer. Without giving away too much, it’s a deranged and unpredictable story about love, loss, control and the most unhinged polycule you’ll ever see.

The Forest of Love was my very first introduction to the mind of Sion Sono, and I found it to be equal parts gorgeous, excessive, masterful, revelatory and frustrating. So when I learned there was a miniseries version of the movie that was twice the length, I was hesitant. The easy misconception here is that Sono is “packing in more” with Deep Cut, but in actuality, the extended runtime and episodic format gives the narrative — which is somehow based on a true series of events that’s even more unnerving than what’s found on-screen — more room to breathe and makes it more resonant.

But Deep Cut isn’t only the definitive version of Forest of Love, it’s the most definitive work of Sion Sono. It’s the clear accumulation of all his works, with all of his typical oddball flourishes and archetypes on display — including his fascination with grisly true crime, his uncomfortable explorations of the darker sides of human sexuality and the suffocating societal expectations put on women. It’s a sampler platter of Sono’s styles and stories, boldly answering the question, “What would happen if all the characters from his other movies met?” (The answer: “It would be fucked.”)

Both versions of Forest of Love are an examination of art, abuse, performance and agency, but Deep Cut goes further, also illuminating the twisted queer romantic tragedy that lies deep at the story’s center. In other words, if you can only bear to watch this thoroughly unsettling story once, do the miniseries. 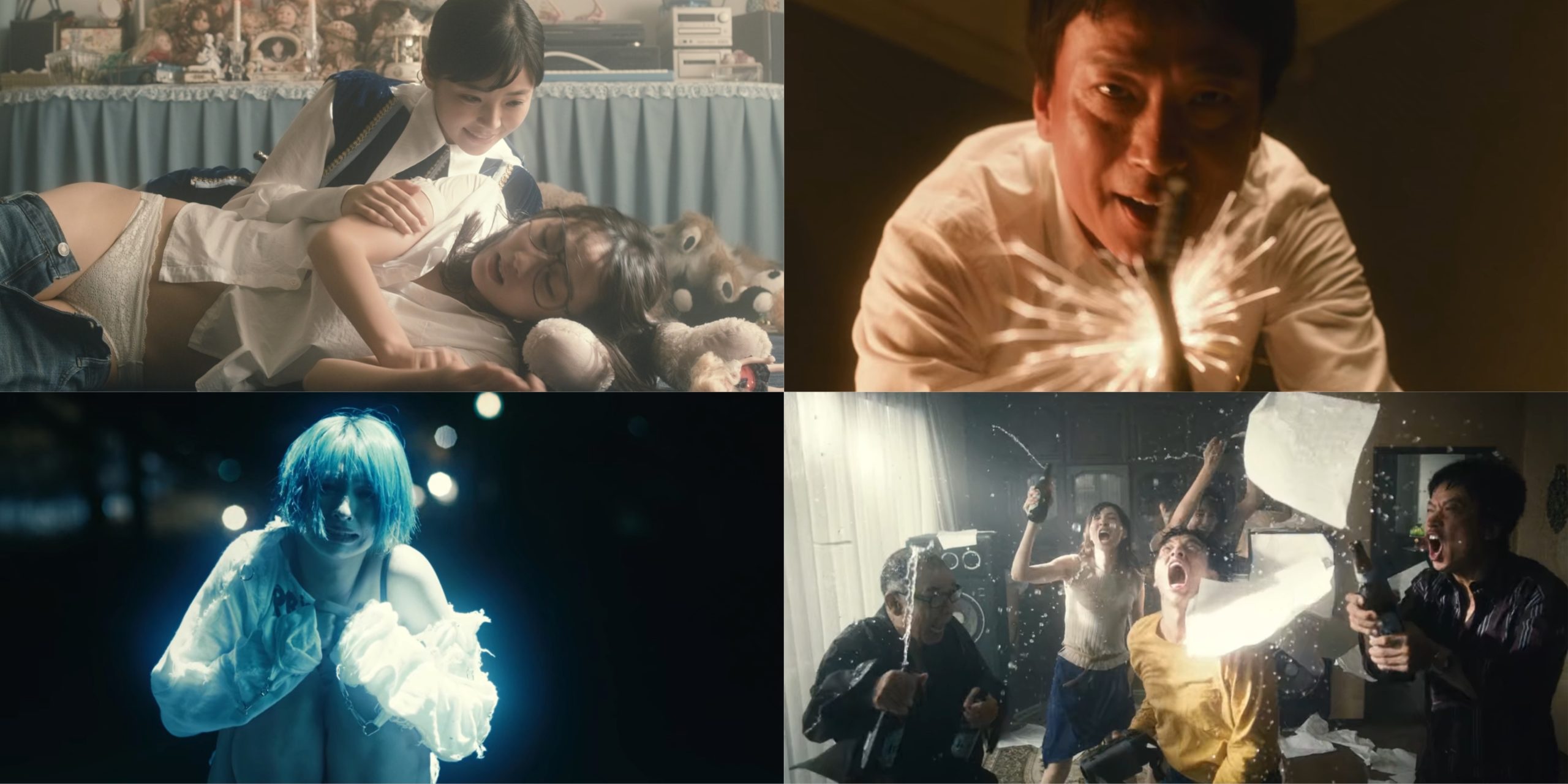 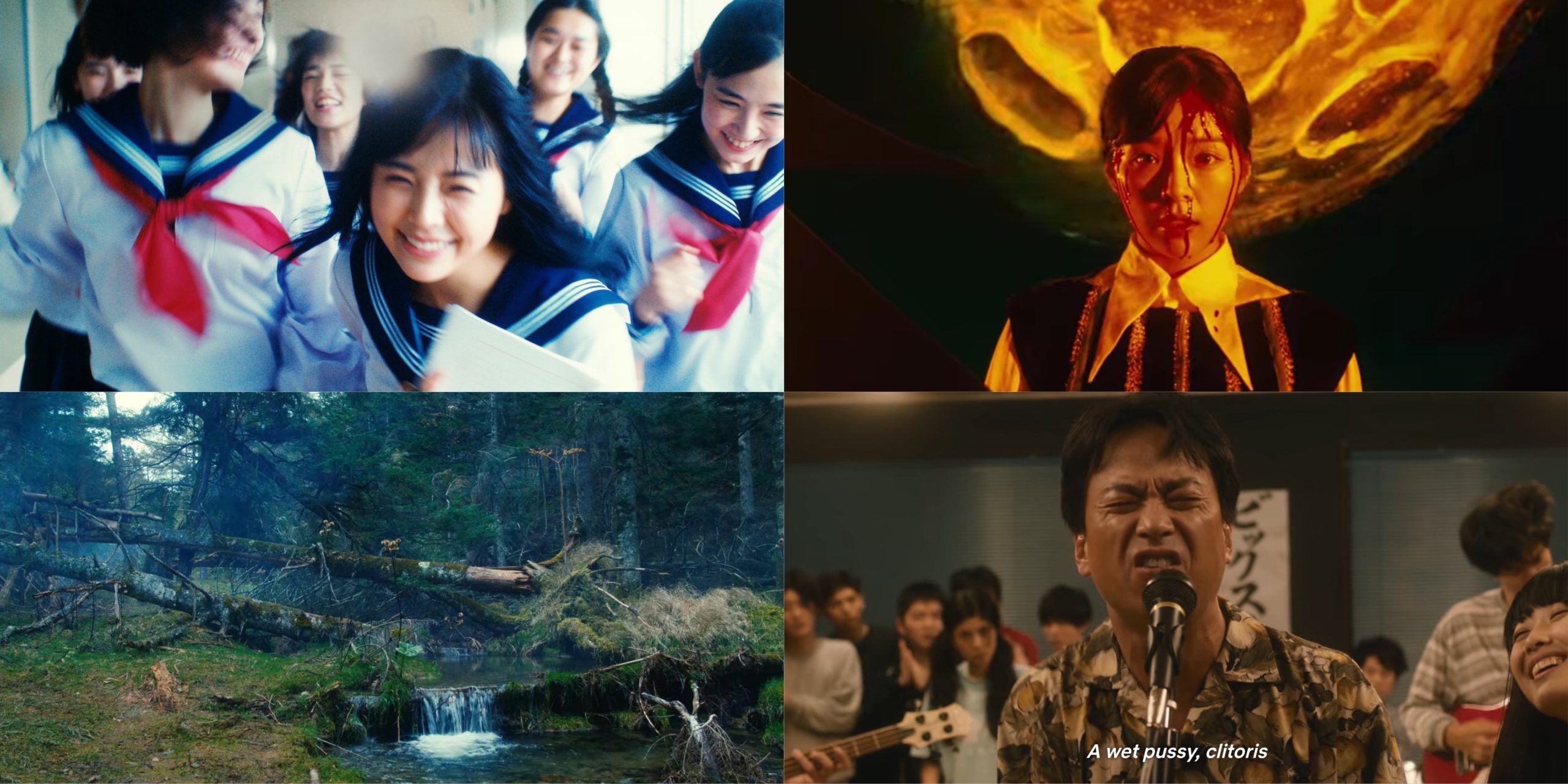 Sono has stated his approach to filmmaking as being quantity over quality. “Quality makes people cautious,” he says in the documentary The Sion Sono. “I go for quantity so I can advance. I just keep making things, and one of them might be good.” But for my money, the best thing about Sono is that, underneath all of his gore, sexual perversion and deranged iconography, he’s always trying to relay sincere meaning.

He always has something on his mind, and he always has something to say. Mind you, it isn’t always a prudent statement or a well-put-together thought, but it’s always earnest. At times, he rambles toward his meaning with all the drunken fervor and disquieting candor of an overfamiliar friend of a friend you just met at a party. But to those of us who know him to any real degree, we recognize that as part of his well-meaning charm. A little-too-friendly, a bit more candid than one should be with strangers and ever-reaching toward the deeper meanings of life and love by using the most bizarrely unsettling metaphor possible.