We’re Down to Our Last Crumbs of Serotonin

A year after much of the U.S. first went into lockdown to curtail the spread of COVID-19, we may be seeing light at the end of the tunnel. There are three effective vaccines, and we’re now administering millions of doses per week. Some states are no doubt lifting restrictions too soon, but the hope is that either way, herd immunity is just a few months off. And with that, one further hopes, we will achieve a kind of relative stability that has eluded the country since last March.

Within the human body, that kind of equilibrium greatly relies on serotonin, a small molecule that operates as both a neurotransmitter and a hormone to regulate everything from sleep and digestion to sexual behavior and overall mood. First categorized in the mid-20th century, it became familiar in our culture through the prevalence of SSRIs and other antidepressants that modulate its activity in the brain — anxiety and insomnia can also have roots in serotonin deficiency. Along with the rise of memes about therapy, mental health issues and the medications that go along with them, we’ve seen an explosion of serotonin-based content. 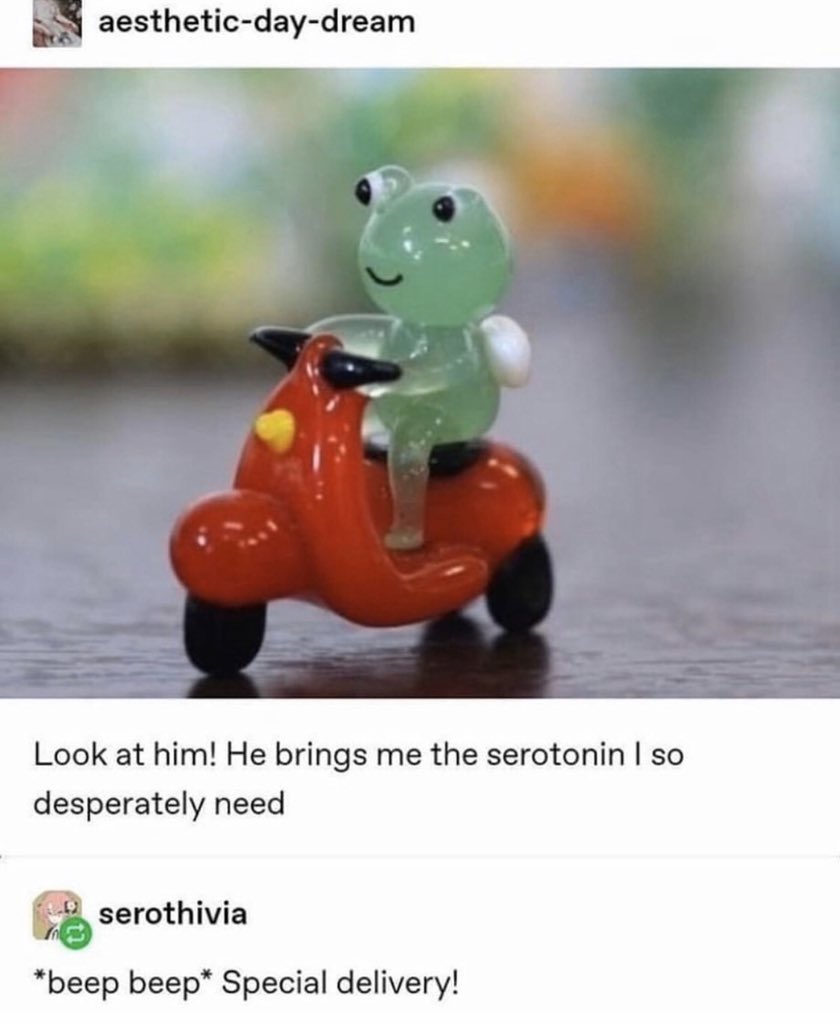 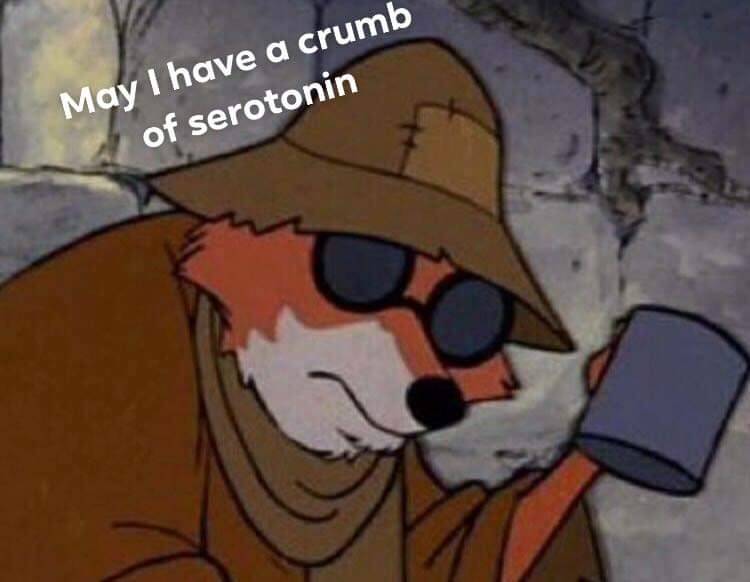 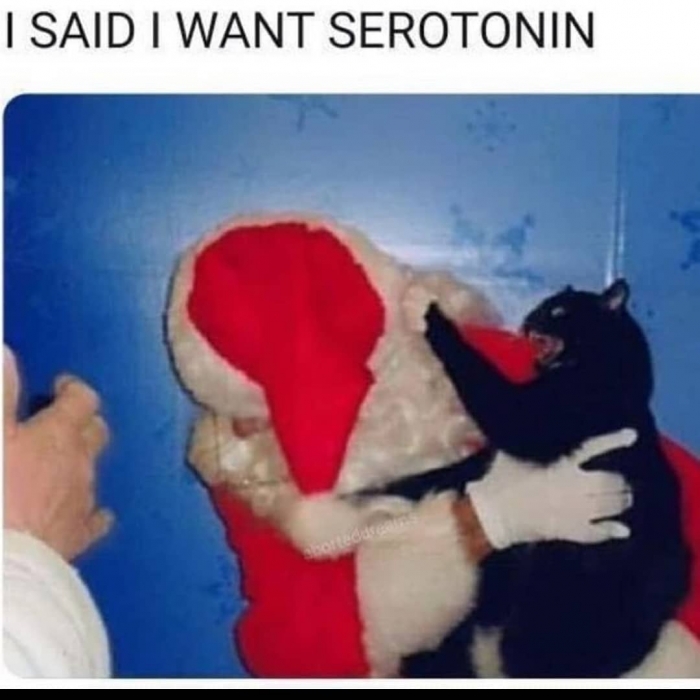 Understandably, the horror and helplessness we’ve felt in the pandemic has thrown us all out of whack. Our customary sleeping, eating and fucking — the basics for which serotonin plays a crucial role — were disrupted and thwarted. Never before have so many felt in dire need of this simple chemical: 12 hydrogen atoms, 10 carbon, 2 nitrogen, 1 oxygen. It’s gotten so bad that we’ve created images where destitute characters beg for “a crumb” of serotonin; you can find Oliver Twist holding up his empty bowl and asking, “Please, sir, may I have some more serotonin?” The actual functions of the substance are deeply intricate and beyond most people’s expertise, which in turn reduces it to a core element: It is the very foundation of happiness. 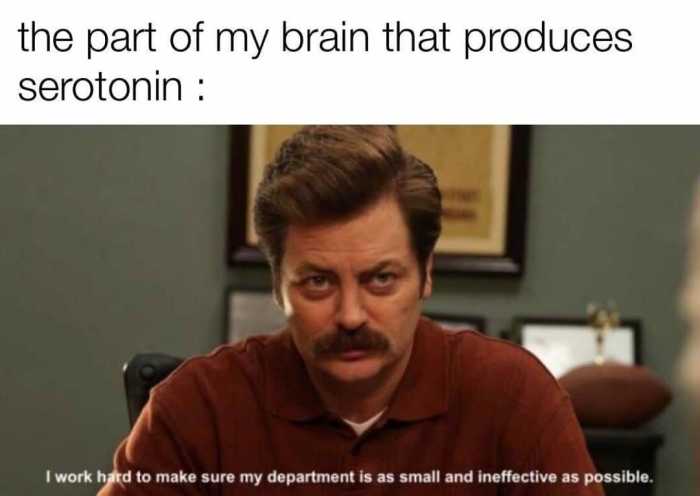 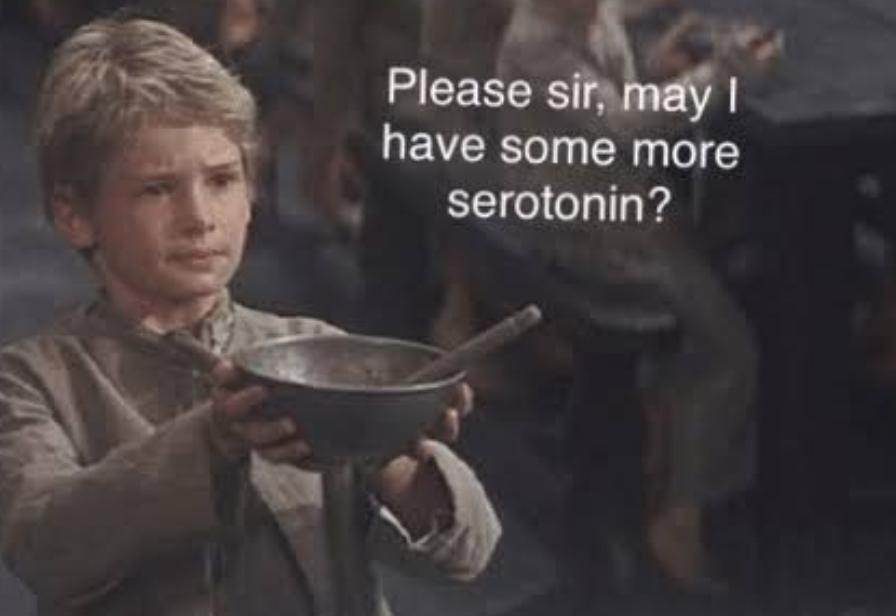 Another neurotransmitter — dopamine — has not been as popular a subject for despairing jokes and memes. Perhaps that’s because it is (somewhat erroneously) associated with feelings of pleasure and reward, and at our lowest points, we are preoccupied with gaining a baseline aptitude for daily life, not reaching for the highest of highs. We have to be able to get out of bed and brush our teeth in the morning before we can even imagine the fun stuff. Serotonin represents the bare minimum it takes to get by, and if we’re constantly depleted, this lack overshadows identity and intention. We can’t process anything except the gnawing, dire need. 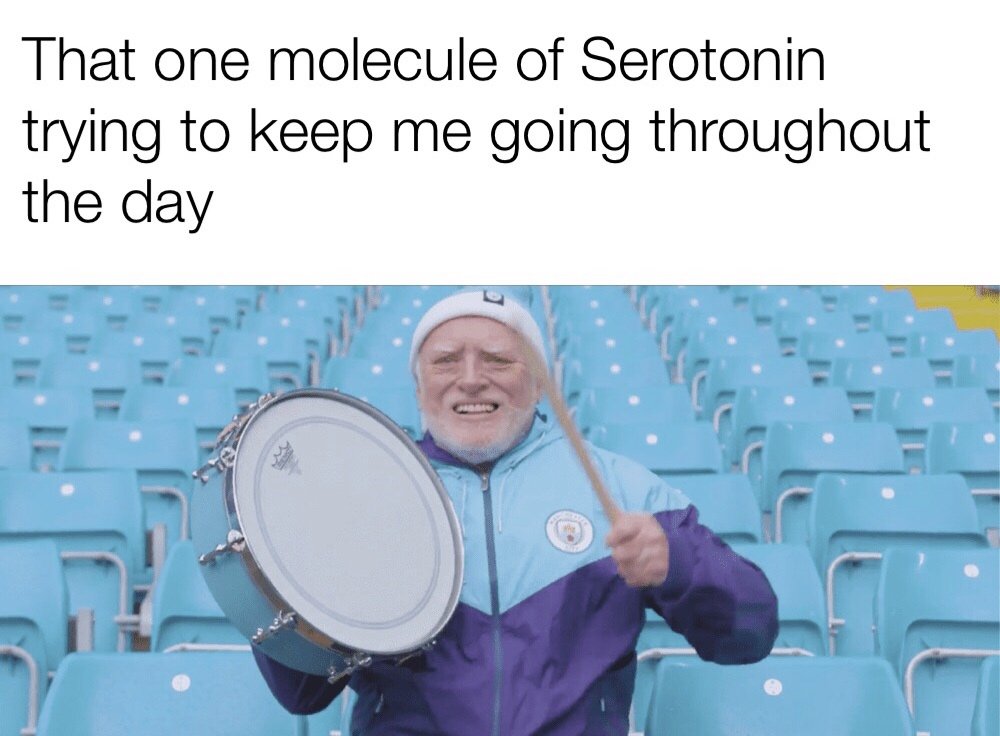 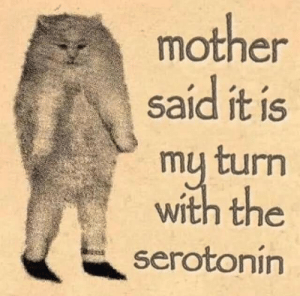 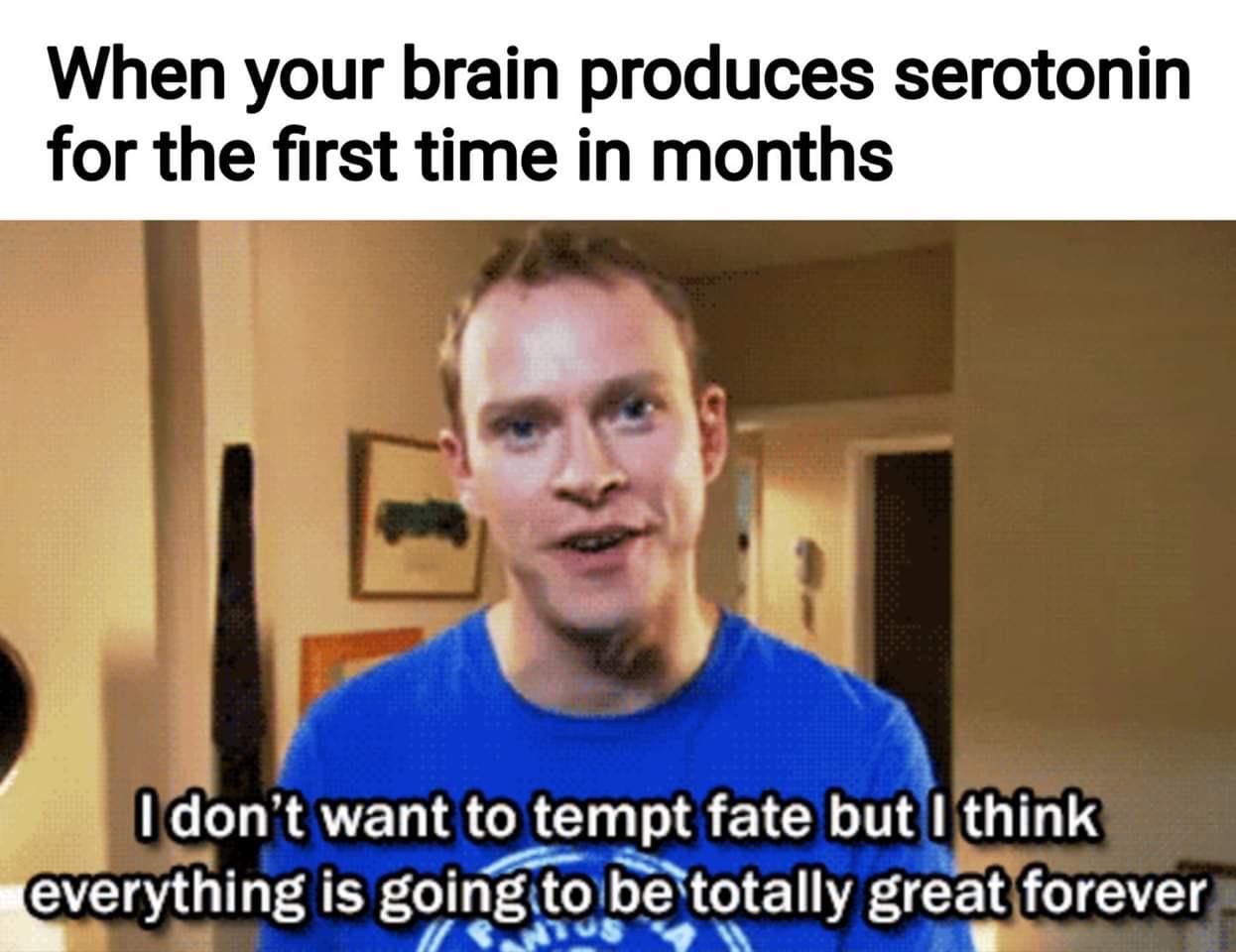 The serotonin posts offer a coping method, of course: You may achieve temporary balance or a fleeting boost of good humor by mocking the inefficiencies of your own nervous system. But they also reveal a generational sea change in how we perceive emotion and passivity. A hundred years ago, nobody could attribute being stuck, sad, numb or unmoved to a particular compound in (or absent from) the body. Now, whatever the cause of gloom — be it a rainy day, a bitter breakup, dystopian politics or a worldwide health disaster — those various pains are understood as the same fundamental inner problem, and a ridiculous one at that.

In their starkly materialist understanding of the human animal, serotonin memes have developed a natural absurdity. How strange to be paralyzed by the ebb and flow of unthinking little messengers.

From a scientific standpoint, they’re not altogether accurate, but such riffs nonetheless destigmatize the blues by suggesting that whatever our differences, we all suffer alike. Some suffer more acutely and require a pharmaceutical intervention — but in the last year, no one has been spared a taste of what it’s like to have the serotonin run dry. Let’s see if, as the nation prepares to recover its former self, we retain the new empathy and understanding that come with that experience. Because pandemic or not, there’s never enough serotonin to go around.