The Unshakeable Vibe of Robert Pattinson in the Kitchen

Seriously, what’s he doing there?

As of this writing, the major national news is that Donald and Melania Trump have tested positive for COVID-19. Predictable though this was, it still comes as a great surprise, and the timing — a month away from the 2020 election, with a Supreme Court nominee in limbo — makes this turn of events especially chaotic. I cannot even begin to pretend I have a clue what the situation will be on Monday morning, when this piece is published. But I have a feeling that whatever the headlines may be, I will feel like actor Robert Pattinson standing around in a kitchen. 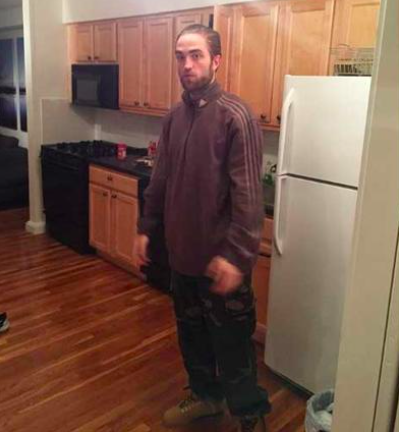 If the first Trump-Biden debate had the frenetic energy of Uncut Gems, the rest of us can identify with Pattinson when he was in the process of developing his character for a previous Safdie brothers film, Good Time. Josh Safdie shared the photo on Instagram in 2017, ahead of the movie’s release; three years later, the post is deleted, but the meme is thriving. Pattinson’s quizzical expression captures the uncertainty of how to react in the midst of a pandemic and political upheaval, the stilted and unnatural pose of someone braced for yet another narrative twist. He waits for the other shoe to drop (and then the next, and the next). His surroundings — a kitchen too blandly generic to seem real — place him far outside recognizable space and time, in a harshly lit purgatorial chamber. For the crowning touch, he’s dressed like an utter dirtbag.

Is the photo “cursed,” as many seem to believe, or simply a potent glimpse into our own off-kilter psyche?

In Good Time, Pattinson plays Connie Nikas, a small-time New York criminal whose plans of a bank robbery quickly devolve into a series of even worse schemes to elude law enforcement and retrieve his brother from police custody. Everything he does is out of dire necessity, in a panicked mode of self-preservation, and each of his improvised efforts bring him closer to ruin. Sound familiar? We’re all Connie, man, hustling and failing, disoriented and degraded. We woke up one day in mismatched clothes and tried to make it work. Our lives are held together with prayer and duct tape. Nothing is assured except, of course, a tragic ending.

Everyone wishes to face the world with confidence, style and savoir faire. We have vague ideas of what we should be doing or saying in a given moment, but suddenly, instead, we’re blowing up a microwave with an experimental pasta dish. Pattinson’s aura in the kitchen shot approximates the potential chaos that lies within the human form, even when it is at rest. It’s the blur of his left hand, the blank slate of the refrigerator. Beyond, an adjoining room of mystery. Yet Pattinson lingers, he looms, he stares and he seems to drift away from himself, toward another identity. Yes, he is acting, though with nothing to act about — so he just is. The vibe cannot be distilled any further; it is elemental. Only other forms of art compare to its power.

Perturbed by Pattinson as he appears in this context, some on social media have begged for an end to the meme. But unlike many viral trends that saturate the internet before disappearing, Robert Pattinson in a kitchen conveys no actual joke or idea — and so he cannot run the usual course of interest. As soon as you forget about him, he’ll pop up again, looking for answers, an explanation, guidance. What is expected of me? he asks.

Even if we knew, how would we tell him? He is trapped there, in the screen, out of reach. Actors come and go. Awkward is forever.