Could Restaurants Be the Solution to Our Food Waste Problem?

ReThink Food is partnering with local eateries to produce more than 50,000 meals a week in the pandemic. But as they fight for a more sustainable future, bigger challenges lie ahead

I learned a lot of lessons in my short years as a cook in my parents’ sushi restaurant in Hawaii, but few edicts rang as loudly as don’t waste food.

Naturally, my standards needed honing; I couldn’t help but get scolded while doing seemingly rational things. Trimming and trashing the ugly tops off green onions? That was a waste, given that they could be used in the broth for our soup. Tossing the tough, membrane-riddled trim off a hunk of tuna? That was wasteful, too — the meat could be scraped with a spoon and repurposed, usually as a delicious filling for hand rolls.

And at the end of each night, we always gathered up the little plastic containers of pre-packaged sushi, made just a few hours prior for grab-and-go customers. Usually, these untouched leftovers became a late snack for the security guards working the night shift in the building. Other times, we just took it home and ate it ourselves the next day. The only thing we couldn’t do was throw it in the bin.

Every restaurant on Earth confronts a version of this dilemma after each day’s service, and none of them aim to waste food and money. Inevitably, however, they all do — some more than others, tossing out literal trays and garbage bags of edible food that can no longer remain in the restaurant’s inventory but has no place to be dropped off, either. The culprits range from fast-food franchises to upscale buffets to mom-and-pop eateries, but whatever the setting, the impact of the crisis remains staggering: American restaurants trash an estimated 22 billion to 33 billion pounds of edible food each year, with another 7 billion to 11 billion pounds coming from institutional facilities like hotels, hospitals and schools.

This is an especially stark fact in 2020, with millions of Americans out of work and struggling to keep up with their day-to-day needs as a result of the pandemic. Unsurprisingly, food insecurity is spiking because of this pressure. Local food banks are seeing major increases in demand across the nation, and it probably won’t subside for some time given the rocky recovery ahead. So given the rising number of hungry mouths, why couldn’t we simply feed everyone with excess food from restaurants?

Matthew Jozwiak wondered the same while watching food get thrown away at every kitchen he worked in, including at high-end institutions like Eleven Madison Park in New York City and Noma in Copenhagen. The task of donating odds and ends like cooked meats, stocks and greens felt more complicated than necessary; again and again, Jozwiak heard replies that felt more like dismissals than answers. “I saw this excess food, and talking to the chef about it, I’d hear, ‘Oh, we can’t donate it.’ So I’d ask around and people would constantly just say, ‘Matt, there are people who already do this.’ Then when I tried to find the organizations that take food, they’d tell me we weren’t big enough of a source and couldn’t give enough food to qualify,” Jozwiak says.

Jozwiak and his team launched the nonprofit ReThink Food in New York City in 2017, with the goal of collecting all kinds of excess food, whether it’s a few quarts of lemon juice or a hotel pan full of roast beef, from kitchens all over the city. Next, ReThink takes that food and works with local restaurants to prepare and distribute cooked meals, usually to local community organizations or other places where hungry people line up for a free bite. Before COVID, the ReThink network was producing around 5,000 to 10,000 meals a week, Jozwiak tells me. Since the pandemic kicked off, the numbers have skyrocketed to an average of 50,000 meals a week today, with a summertime high of double that number. 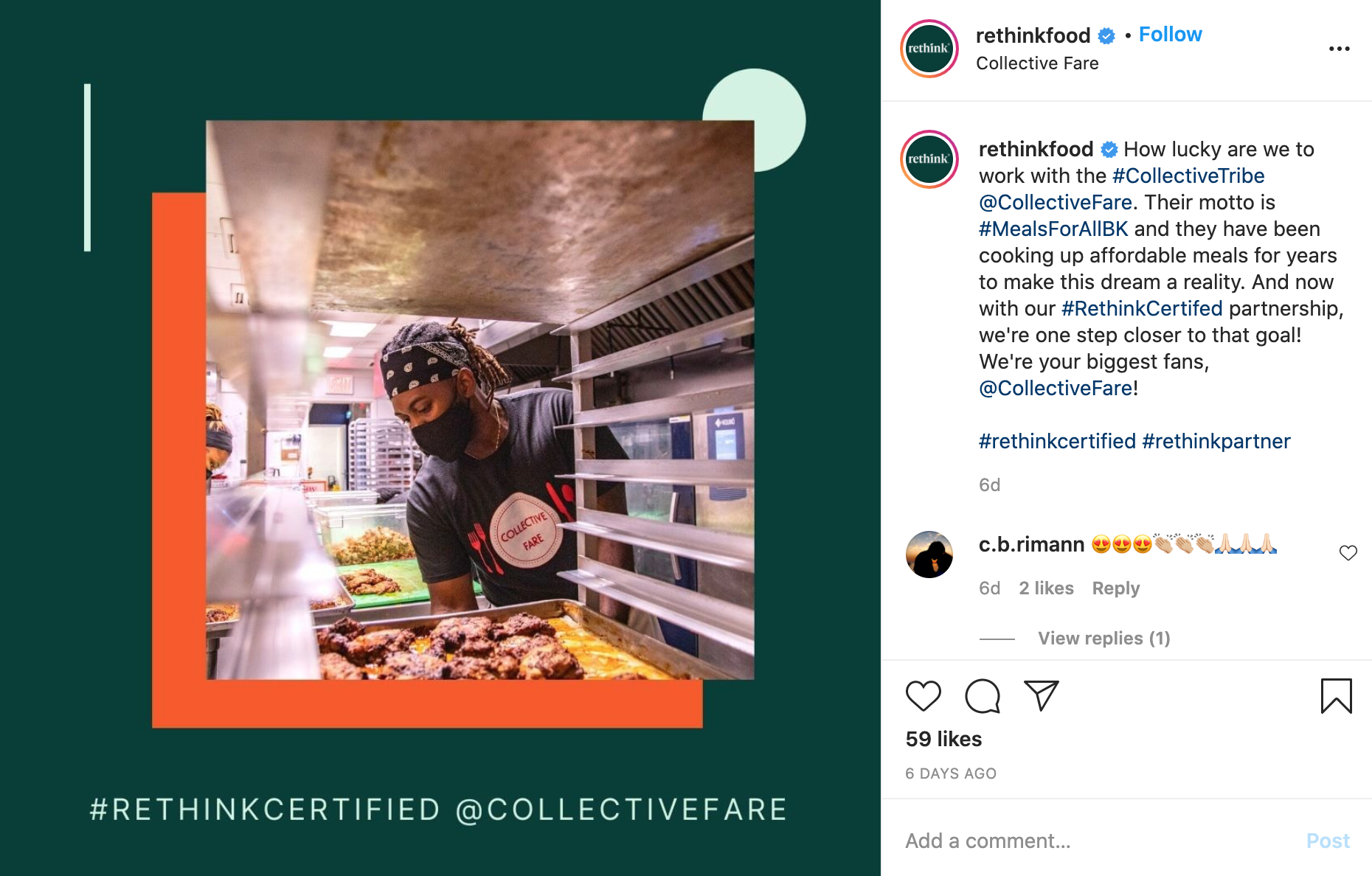 “It’s all very practical. We work to keep costs low and make delicious food. The end result is your neighborhood restaurants have to make a couple extra hundred meals for the neighbors next door, and if 45 restaurants do that all at the same time, you get 50,000 meals a week,” Jozwiak explains.

Yet even with food insecurity doubling in America because of COVID, many restaurants here remain hesitant about making long-term changes to how they manage leftover food. The biggest myth that lingers is the notion that donating excess food opens up a restaurant to liability if someone gets sick, says Madeline Keating, an expert with the Food Matters team at the Natural Resources Defense Council. This myth is part of the reason why many restaurant operators can imagine donating a case of cabbages, but don’t want to fuss with, say, leftover pastries or side dishes.

“A lot of restaurants tried harder to donate when they had a lot of surplus fresh food, like at the beginning of the pandemic. Where education is needed is in the day-to-day restaurant activity of dealing with 10 steaks that you’re not going to serve,” Keating says. “I talk to chefs and people in the restaurant business all the time, and they have no idea that there’s federal protection for food donation.”

City, state and federal programs to streamline excess food donations exist, but it can be confusing and discouraging to run into a litany of perceived and real barriers to food donation, whether it’s health-code regulations or an unresponsive nonprofit. Finding the right food rescue partner can be critical, Keating says, but even beyond that, success requires chefs and owners who understand that wasted food isn’t just unethical, but detrimental to the bottom line.

To that end, the reason why my parents were obsessed with food waste wasn’t because of deep-seated notions of not wasting the life of a cucumber — it was because every bit of food they found in the trash represented money spent. When they stopped running sushi restaurants and bought a neighborhood red-sauce Italian joint, they were horrified to see that sloppy inventory lists meant meat and produce were routinely spoiling and getting tossed, or that most leftovers went in the trash as a matter of policy.

Even with a suite of changes, their operation is still far from perfect, but the pandemic has made everyone in the restaurant more observant about waste, my dad tells me. “Who can afford to throw away food right now? Everyone is thinking about it,” he says. “I still don’t know that it’s worth it to sign up for a food donation, because we just give the employees the leftovers to take home. But while it might make sense for a place like Chili’s to throw food away to save costs, that’s not how it works for an independent restaurant, or regular people at home.”

Turns out, a pandemic that wrecks supply chains and leaves people staring at empty shelves does a lot to wake people up to the unsustainable ways in which we consume. (The end of buffets might also be another small upside when it comes to edible food waste.) There’s still a lot of work to be done, whether it’s teaching cooks about how expiration dates are bullshit or just reducing portion sizes so that customers stop leaving uneaten food on their plates. Experts say that teaching restaurateurs about the monetary savings of reducing waste, as well as the tax write-offs that come with food donation, can be especially effective. But it’s all a testament to how challenging it can be to reverse habits that have normalized over decades, thanks to American consumerism and faith in the Land of Plenty. I’m not sure a new wave of techy programs to reduce food waste can really shift mass apathy on the matter, but only time will tell.

Unfortunately, the number of people who are broke and skipping meals isn’t improving anytime soon. And without bold plans like boosting funds for the Supplementation Nutrition Assistance Program (i.e., food stamps) or re-implementing the hugely effective $600 weekly unemployment benefit, the onus of feeding these people will continue to fall on local food banks and food rescue programs — as well as the restaurants that partner with them. The work ahead is Sisyphean in scope, but Jowziak’s success stories from this year make me feel a glimmer of optimism.

He gushes as he talks about a soul food restaurant in Harlem that was struggling because of the coronavirus closures throughout New York. ReThink gave it funds to use its kitchen to whip up dishes using excess food. That, in turn, led to a lot of Harlem buzz about how the restaurant was cooking delicious food and passing it out at the local community center.

“So then people start showing up to the restaurant, and they’re getting more business, and the owners are so excited about the program that they just started making more free meals on their own. People get free emergency food in a crisis, and the marketing dollars are paying for themselves,” Jowziak tells me. “It’s building up the community, where taking care of your neighbors is essentially cool. That’s a win.”