The beloved fantasy series is getting a Netflix adaptation. Inspired, I became the Friar of my abbey kitchen and ate like Martin the Warrior for a day

The world of Brian Jacques’ Redwall is rife with every manner of woodland creature, depicting the lives of mice, moles, squirrels, badgers and beyond in mythic detail. As a young boy, I fell in love with everything about the series — the intricately illustrated covers, the sweeping tales of battle and camaraderie and the idiosyncrasies of each animal community. Over the course of 23 (!!) thick novels, Jacques weaves a tapestry of narratives, builds a unique lifestyle, dialect and even diet around various tribes and timelines.

I, being a Korean kid in Hawaii who loved the water, imagined myself as one of the river otters. They played hard, fought hard and adored the spicy flavor of hotroot in their foods. Just like me, I thought as I read another Redwall novel at the dinner table, eating spoonfuls of kimchi stew. 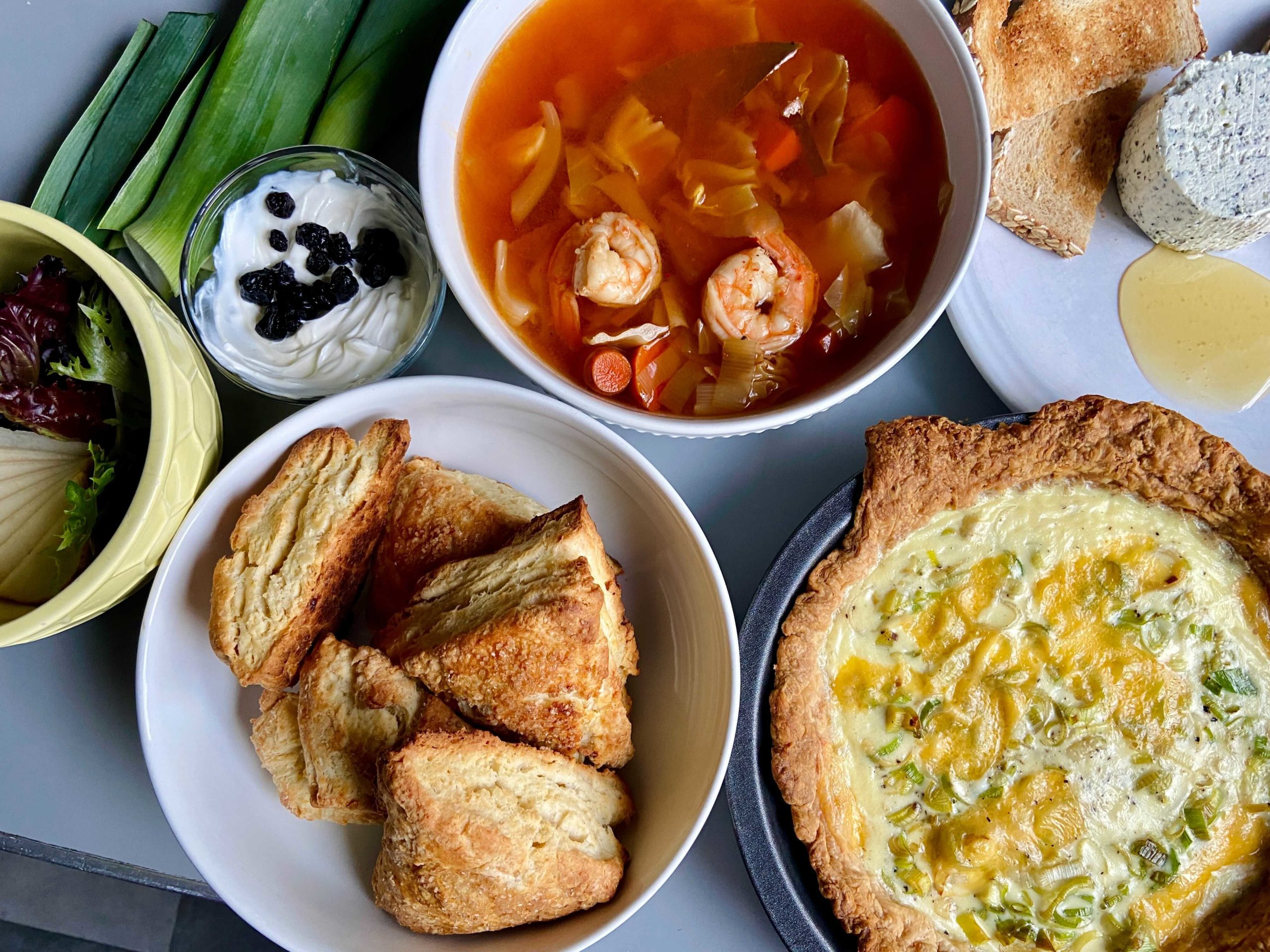 It wasn’t just the otters’ favorite shrimp ‘n’ hotroot soup that I craved; I’m fairly certain the Redwall books radicalized me at a young age into a type-A obsessive about delicious food. No matter whether I was reading Eulalia! or Martin the Warrior, I knew the book would feature page after page of lusty food prose, especially if it was a celebratory feast held in Redwall Abbey or another enclave. The words are straight out of a Chez Panisse menu: “Tender freshwater shrimp garnished with cream and rose leaves, devilled barley pearls in acorn puree, apple and carrot chews, marinated cabbage stalks steeped in creamed white turnip with nutmeg … crusty country pasties, and these were being served with melted yellow cheese and rough hazelnut bread.”

I consumed page after page of this stuff, tasting dishes in my mind and associating delicious food with the best of human emotion: love, joy, relief and the buzzy excitement of trying something new. So you can imagine my utter delight at the recent news that Netflix is adapting the Redwall series, hopefully with plenty of feast footage in each episode. To celebrate, I decided to put together a little feast of my own at home, taking direct inspiration from the dishes in my memory as well as a little bot-run Twitter account, Redwall Feasts.

(There is an official Redwall cookbook, but for the sake of experimentation, I chose to start from scratch or lean on recipes I’m already familiar with.) 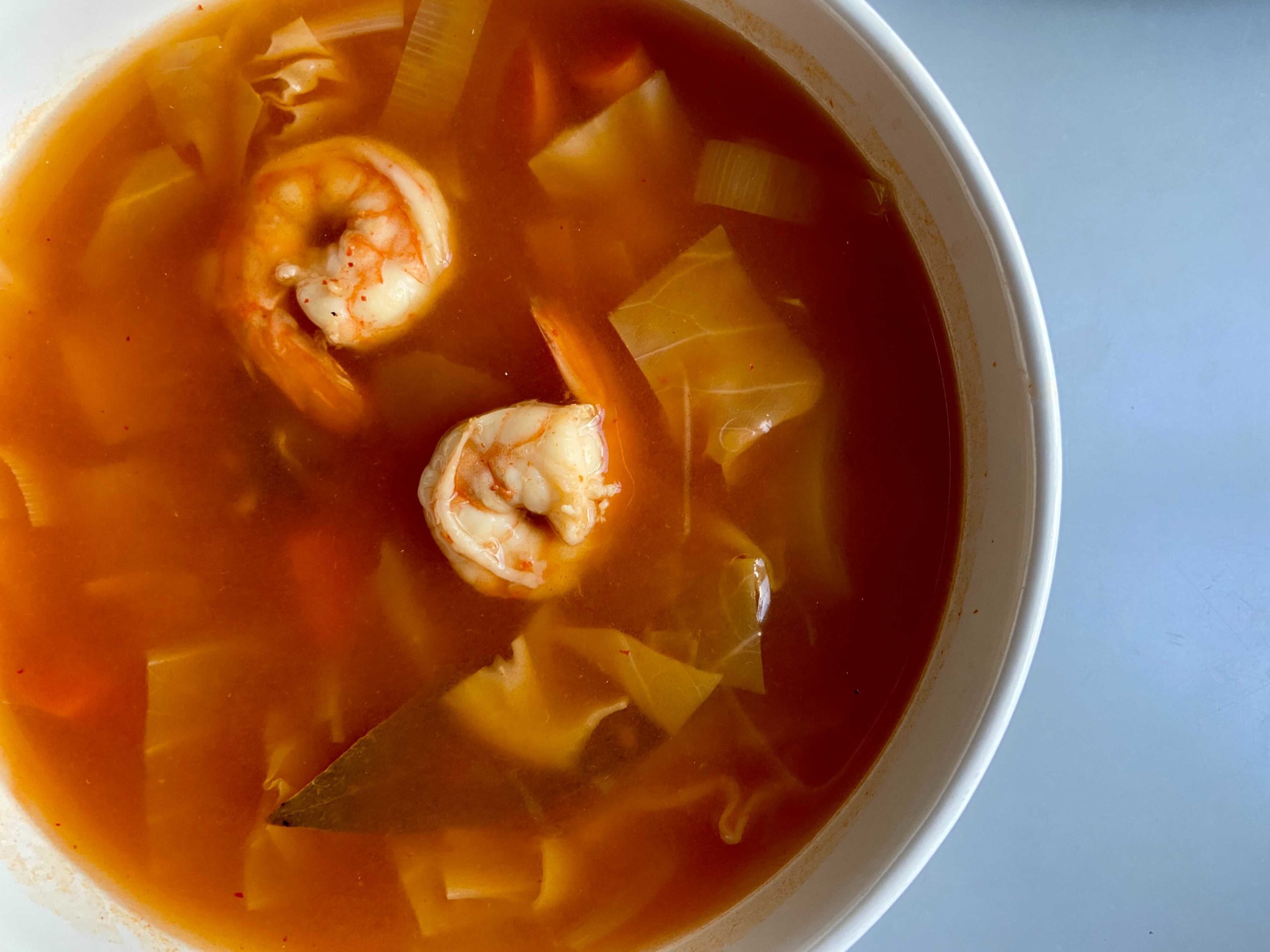 The dish that sparked my obsession is about as simple as it gets, given it’s just a light, versatile broth that can be tweaked with whatever ingredients you have in the fridge. The key is to buy shell-on shrimp and first use the peeled shells to make a flavorful stock, then add in vegetables and the shrimp meat. The “hotroot” in my case is Korean chili pepper flakes, but you might prefer going with paprika or a mild mixed chili powder.

Sauté the shrimp shells in a pot with a little bit of oil until they turn pink and fragrant. Add all the vegetables and seasonings to the pot, stir and then add the water. Bring up to a simmer and cook until the vegetables are almost tender. Add salt to taste, then add another pinch to the raw shrimp. Toss the shrimp in, simmer for a few more minutes, then take off the heat and serve. 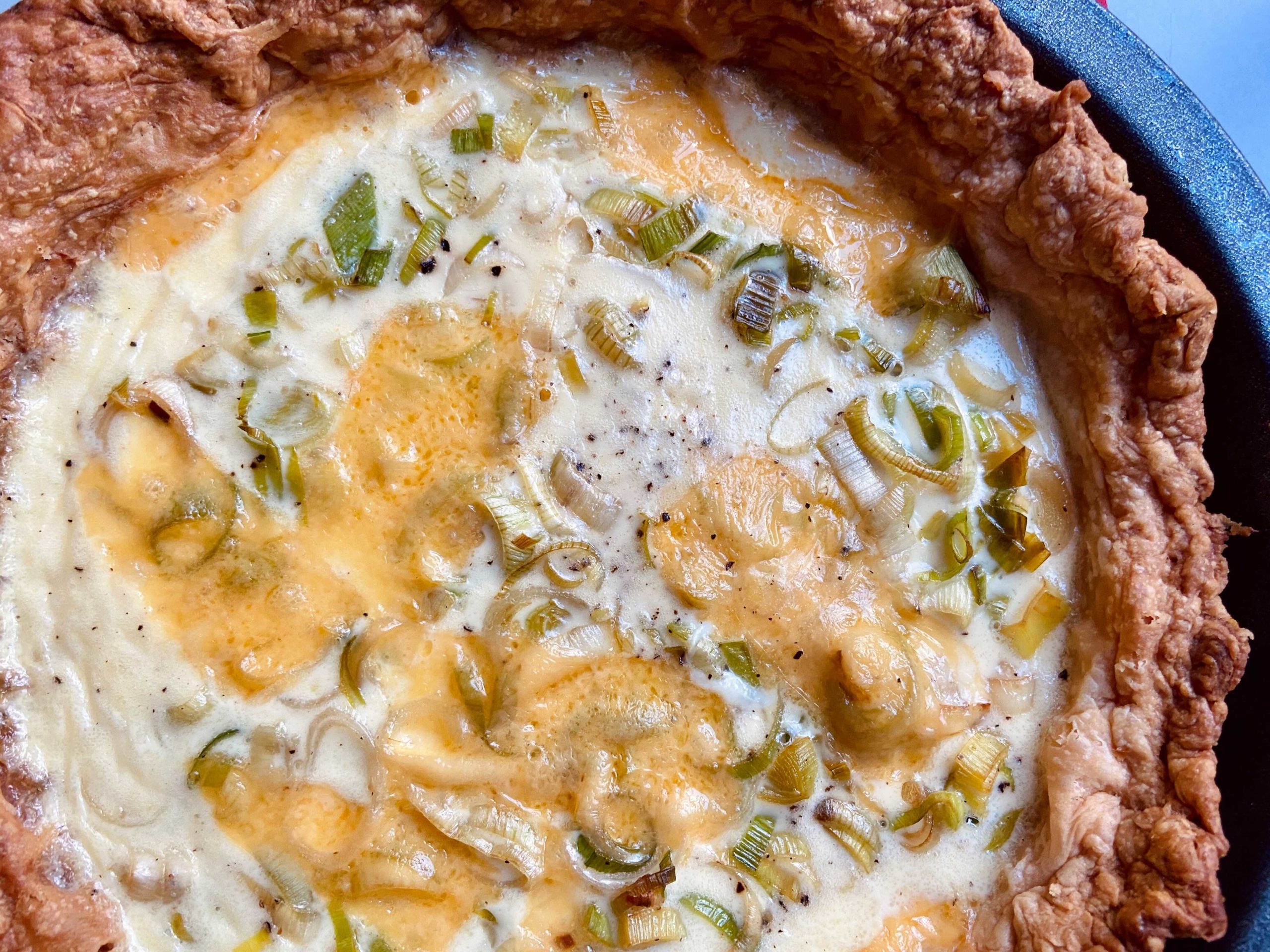 I love that the denizens of Redwall Abbey adore all kinds of pies, whether it’s a simple fruit varietal or the moles’ favorite Deeper‘n’Ever Turnip‘n’Tater‘n’Beetroot Pie. But I also recall there being a variety of savory “flans” described in the series, and found a “cheese and leek flan” via the Redwall Feasts Twitter account.

When I think of a savory flan, I think of a custard made with eggs and milk, and lo and behold, the top result for a search on “cheese and leek flan” pointed me toward a quiche. Now, I’m not entirely sure how a bunch of tiny field animals would get their paws on eggs and dairy, but fantasy is a genre in which the suspension of disbelief is vital, so we’re just going to roll with it.

Preheat the oven to 350 degrees. Sauté the leeks in some butter or oil over medium-high heat until they soften. Set aside. Whisk all other ingredients (except for the cheese) in a bowl. Set your pie crust pan on a baking sheet, sprinkle on the leeks and cheese, then place into a medium rack on the oven. Carefully pour in the egg mixture, and gently slide the baking sheet into the oven (you can move the oven rack itself, too). Bake for 30 minutes or until just set but jiggly in the center.

“Meadowcream” Scones With Cream and Jam 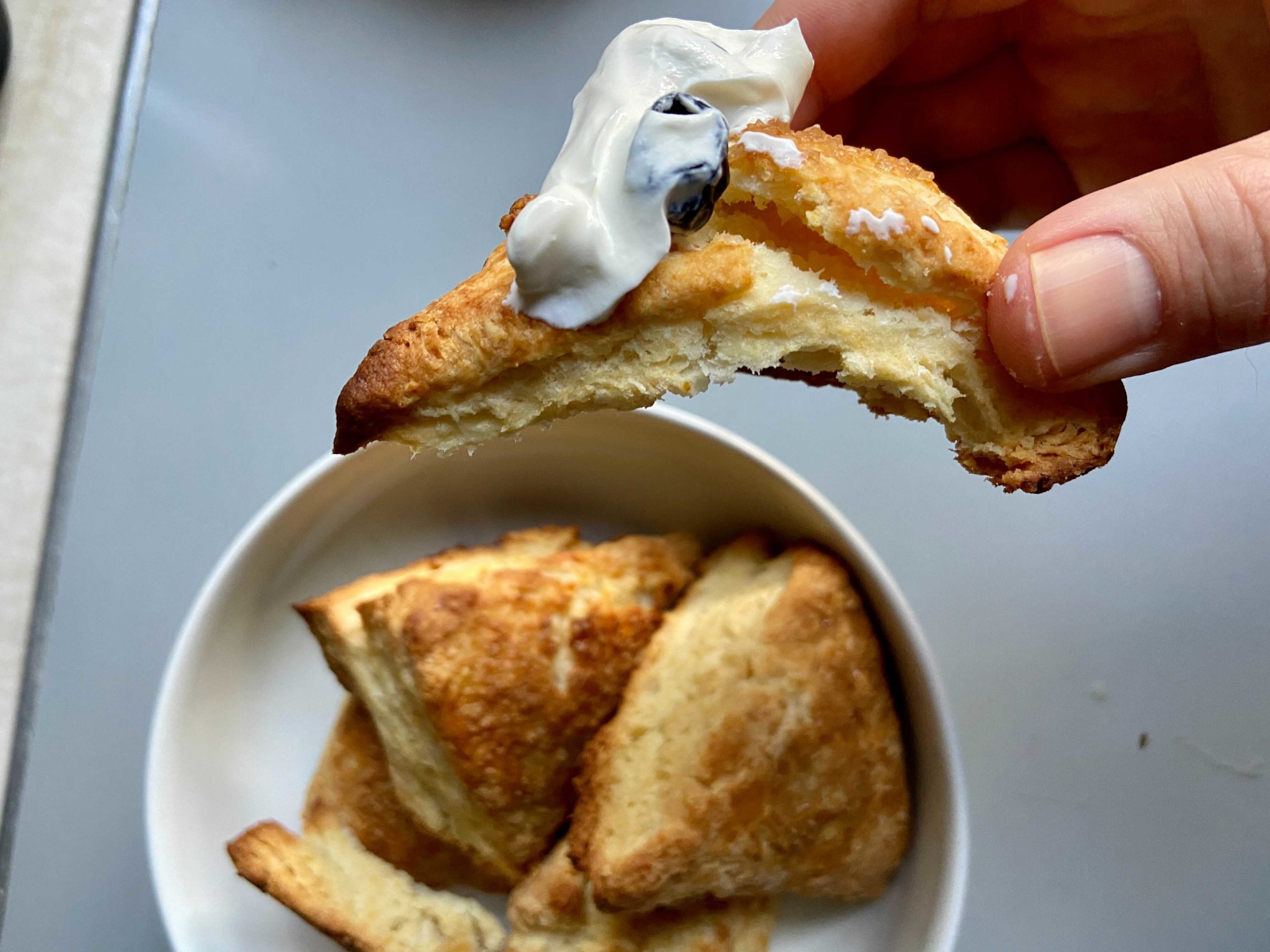 I never quite figured out what “meadowcream” was, but the name did remind me of Stella Parks’ wonderful recipe for cream scones, which are effortless and turn out perfect every time. My only tweak is to brush the dough with milk and sprinkle on a layer of crunchy demerara sugar atop each pastry before sticking them in the oven.

But then I kept thinking about “meadowcream,” and imagined a crew of mice laying out pans of cream in the literal meadow outside of Redwall Abbey, letting the dairy absorb natural cultures and sour. So my big suggestion here is to take a dollop of good ol’ American sour cream, mix in a spoonful of sugar and a dribble of vanilla extract and smear it generously on each bite of scone. Don’t forget the honey, either!

Rounding out my feast was a little salad made with baby greens, sliced pear and shredded cabbage; a bit of fresh cheese and brown bread; and brown ale and mint tea to wash it all down.

Staring at this mess of food, I was reminded of how Redwall taught me why we congregate around food and bond with one another through the act of eating. I certainly see it in my real life, and how much I miss forcing all of my friends under one roof to be fed. I used to imagine myself as an otter while reading the books as a kid, but maybe I’m more like Friar Hugo, the legendary head chef of Redwall Abbey who invented signature dishes such as “Grayling a lá Redwall,” or roasted fish smothered in a creamy wine sauce scented with thyme, rosemary and mint.