Water? Painkillers? Shoving an IV into your veins? Which will actually make it possible to crawl out of bed?

So you drank too much Guinness yesterday, and now you feel like a rubber chicken that’s been run over by Optimus Prime, who then proceeded to pour 100 pounds of cement directly into your surprisingly stretchy chicken mouth. This, basically, is you, trying to get anything done today:

Because the hurting needs to go away now please, I asked primary care physician Marc Leavey to help me rank popular hangover remedies by how effective they are — from kinda helpful to complete and utter bullshit.

First, though, Leavey reminds everyone that prevention is ultimately the best way to avoid hangovers. “The most effective way to prevent a hangover is to not get one at all,” he explains. “If you can’t — or won’t — avoid alcohol entirely, there are some basic tips that may prevent as severe a morning as you might otherwise have: Try to limit your consumption, eat some real food while drinking and stay hydrated with water.”

Leavey also notes that different kinds of booze contains different amounts of congeners — byproducts of the fermentation process that our bodies struggle to process — and therefore, drinking alcoholic beverages that contain more congeners results in worse hangover symptoms. “Clear spirits — such as vodka, gin and rum — are the lowest in congeners, whereas whiskey, cognac and tequila are among the highest,” he says. In other words, sticking to clearer (and higher-quality) liquors might help reduce how much you inevitably hurt the morning after. 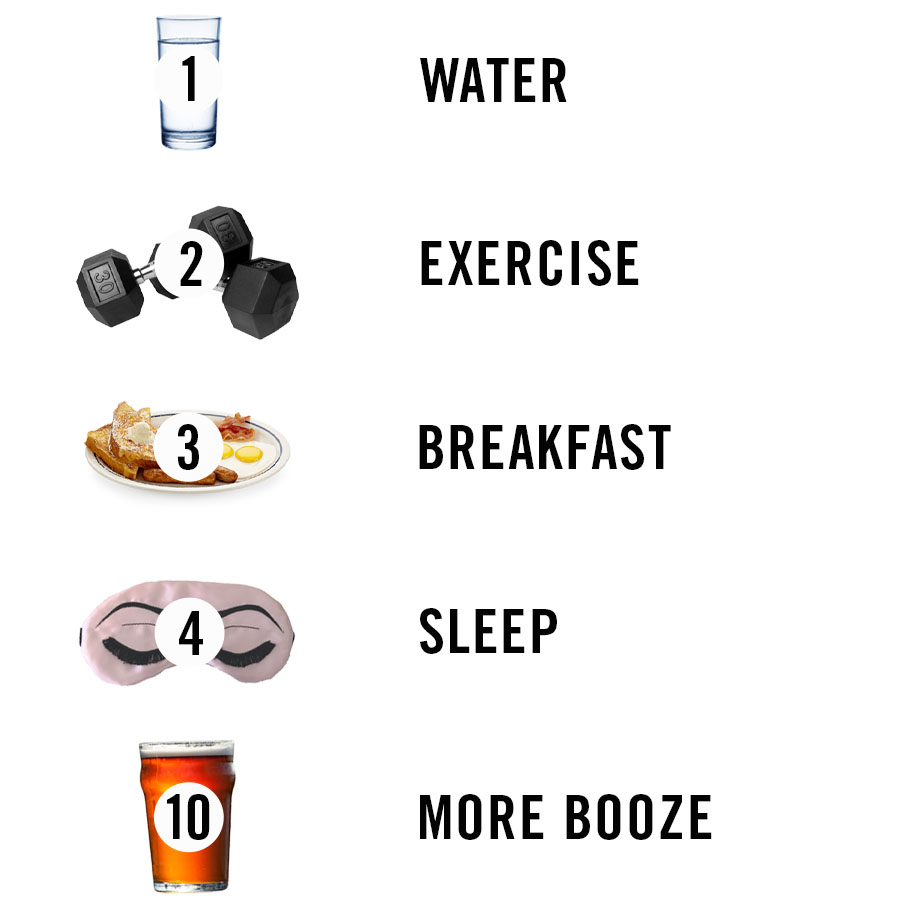 With that in mind, let’s rank some hangover cures…

1) Drinking Water: “According to a preponderance of evidence, dehydration is a central issue with hangovers,” Leavey explains. “Addressing that dehydration with plain water is the most effective means of correcting this deficiency. Drink to thirst — don’t go overboard.”

2) Exercising: Leavey explains that walking around — and moderate exercise, unless your hangover renders you completely bedridden — will definitely reduce that morning-after malaise. But as Aaron White, senior scientific advisor at the National Institute of Alcohol Abuse and Alcoholism, once explained to me, that has pretty much nothing to do with sweating out a hangover: “The vast majority of alcohol — 95 to 98 percent — is metabolized by the liver. But the remaining two to five percent is excreted unchanged in sweat, urine, feces, breath, saliva and breast milk, so if there’s any alcohol still in our body when we wake up the next day, a little bit of it will be excreted via sweat.”

Hangovers result from alcohol that was already metabolized by the liver, so the tiny amount you sweat out the next day really has no effect on your hangover whatsoever. Instead, it boils down to the fact that exercising releases endorphins that improve our overall mood, which simply makes us feel better.

3) Eating Breakfast: “Although there are recommendations to eat a greasy breakfast — or a high-carb breakfast — there are no good studies that show one type is better than another,” Leavey says. “The important thing is to get some calories onboard.”

Several nutritionists recently claimed that an avocado-filled omelette and soup is the ultimate hangover-busting breakfast, which I confirmed in a recent article:

“The eggs in an omelette, they say, are filled with healthy sources of fat that help the body digest any remaining alcohol. Adding avocado to said omelette, they explain, can provide even more healthy fats, and adding vegetables can help support the liver while it attempts to process all that booze. Meanwhile, the soup provides fluids and sodium that help combat the hangover-inducing dehydration.”

So, yeah — omelette and soup for breakfast. Give it a try.

4) Sleeping: “If you can sleep a bit later the morning after, your body might appreciate the extra time to help restore itself,” Leavey says. “There’s no good evidence for a post-waking nap, but languishing under the sheets is okay.”

He’s right. As we learned in a previous article about sleep and hangovers, sleeping can help you get over your drunkenness, but going back to sleep when you’re hungover could be wasted effort: “Alcohol acts as a diuretic, so hangover sleep will often be interrupted by the need to use the bathroom, leaving you unrested and dehydrated. Instead of heading back to bed for a nap(s), it’s more useful to drink lots of water and, if possible, eat something containing thiamine (better known as vitamin B1).”

5) Drinking Pedialyte: The big question here: Are electrolyte-boosting beverages any better at quelling hangovers than plain old water? “Maybe in some people,” Leavey says. “While some swear by such concoctions, others feel that they’re no better than water — some likely just like the taste.”

There’s some science suggesting electrolyte-heavy drinks, like Pedialyte, are at least as effective as water when it comes to reducing hangover symptoms, as my colleague Quinn Myers recently reported:

“For the most part, you feel shitty after drinking because alcohol, being a diuretic, made you piss away all the electrolytes your body needs to feel normal. ‘Electrolytes are minerals essential to your health,’ says Jennifer Williams, a research scientist at Abbott Laboratories, the makers of Pedialyte. ‘They help carry electrical signals that power your nerves and muscles, maintain your blood’s proper PH and balance fluids in your body. You get electrolytes from what you eat and drink, and you lose them any time you lose fluids.’”

However, a comprehensive 2012 analysis of similar electrolyte-providing drinks essentially came to the conclusion that water is equally hydrating. Whatever the case, drinking either water or Pedialyte should help your hangover.

6) Taking Anti-inflammatories/Painkillers: “Taking Aspirin, either as a tablet or as the active ingredient in Alka-Seltzer, ibuprofen (such as Advil) or naproxen (such as Aleve) may help the aches and pains of a morning hangover,” Leavey says. “They can upset the stomach, though, particularly after the irritation caused by a night of heavy drinking. When looking at this category, you should avoid acetaminophen, such as Tylenol, as the combination of alcohol — even a little — with acetaminophen can be deadly.”

WHOA THERE. Now, I’ve definitely taken Tylenol for a hangover — deliberately chosen it over Advil, in fact, in the belief that it was less likely to irritate my stomach — and now, shit, I’m just grateful to be alive. So how is the combination of acetaminophen and alcohol so deadly?

It’s pretty complicated, so let’s take it from the top: Acetaminophen is metabolized by the liver into a substance called NAPQI, which is extremely harmful to liver cells. Fortunately, NAPQI is usually rendered harmless because it combines with another compound called glutathione, and then we pee them both out. However, if you take more than the recommended dose, and too much NAPQI is produced, liver damage can occur.

In reality, if you drink a lot of alcohol in one night, then take a normal dose of acetaminophen, your liver is more than likely going to be fine. In fact, since alcohol and acetaminophen are metabolic competitors, when you consume both at the same time, booze can actually protect your liver by causing acetaminophen to produce less NAPQI than it otherwise might.

The trouble starts when heavy drinkers — in this case, people who have three or more every day — take loads of acetaminophen over several days. That’s because these heavy drinkers tend to have low levels of glutathione, primarily because they’re unhealthy in general, which can result in dangerous levels of NAPQI, and therefore, deadly liver damage.

How worried, then, should we really be about taking acetaminophen for a hangover? “If you drink heavily one night and then take a therapeutic dose of acetaminophen, like 1,000 milligrams at a time, it’s unlikely that you will have any liver damage,” Richard Dart, director of the Rocky Mountain Poison and Drug Center, told Tonic. “That’s because alcohol and acetaminophen compete to be metabolized by the same enzymes [as I mentioned earlier], so there will less NAPQI produced.”

But again, you could simply avoid all of this — and the chance of literally dying — by opting for a different kind of painkiller instead.

7) Drinking Coffee: “Sure, coffee is a fluid, and you might think that would be a good thing,” Leavey says. “The trouble is that coffee is a diuretic — it promotes voiding even more, which can worsen the dehydration. The caffeine might be helpful to some, but needs to be balanced by the fluid effects.” As such, if you need coffee when you’re hungover, make sure to drink plenty of water, too — otherwise, you might end up feeling even worse.

8) Using Hangover Pills and Patches: “There are a plethora of pills, patches and potions that are advised for hangover relief,” Leavey says. “There’s no scientific evidence that they work. At one time, Vitamin B6 was thought to help, but there are no good studies.” Bummer.

9) Getting an IV Drip: “This is a fancy, expensive and possibly dangerous way to get more water into your system,” Leavey warns. “It’s no more effective than a tall glass of cool water, and can lead to ruptured veins and blood clots, not to mention an empty wallet.”

10) Drinking More Booze: “While it may make you feel better temporarily, there’s something inherently illogical about just pushing the latent effects of alcohol off to later in the day,” Leavey says. “Need I say, explicitly, that there’s no evidence promoting the use of this ‘cure.’”

So much for the three margaritas I boofed while writing this article.