After all, I’m now officially too old for Flintstones chewables

It was my birthday on Friday — I’m now officially 35.

Not sure if you knew that, even after mentioning it about a hundred times in my regularly scheduled programming. So I thought I’d let you know, considering the fact that it’s material to my adventures here.

I’m not a big fan of my birthday. I’ve never been a “look-at-me” kind of guy, as exemplified by the fact that I never post on Facebook, don’t even really know how to post an Instagram Story and generally fail to see the utility in social media in general. Ironic, considering one of the many hats I wear at my job is working in social media.

Also, I have, for a long time, felt that birthdays are a letdown. There’s an excitement, no doubt, of hanging out with friends and/or family and doing something fun, but inevitably, that excitement gives way to disappointment, either in seeing which friends bail last-minute, or when your plans go wrong in some form or fashion — like the time I went to The Palm and they ran out of lobster.

All of which is to say I decided that this birthday was going to be different. My mom was going to take me out to dinner and a show on Friday night, I was going to get dim sum with the fam on Saturday and my girlfriend and I were going to take a sushi-making class on Sunday. All in all, a pleasurable little weekend for a thirtysomething aged-out of birthday parties.

But to kick things off, and to make sure I was “pepped up” sufficiently and in a positive state of mind, I decided I needed a “cheat.”

No, not cocaine. Why — do you have some?

I’m talking about pretending I was a celebrity for a day and getting a thicc bag of expensive fluids pumped directly into my bloodstream.

My Problem: I want to look and feel good on my birthday. Is that so much to ask?

The Alleged Cure-All: My fluid-cocktail of choice for this little adventure was I.V. Vitamin Hydration Therapy from the I.V. Doc, which the marketing materials promise will make you “look and feel your best with healthy skin and hair prior to your event or night out” and is “loaded with a custom blend of vitamins and electrolytes,” which include the following:

Of course I opted for the anti-inflammatory add-on, because ¯\_(ツ)_/¯ I’m worth it, and because they told me this was the good shit that was going to make me look like Timothée Chalamet after an afternoon of getting rubbed on at a day spa or 12 solid hours of sleep.

Everything comes in a bag, which the nurse (who, I was told, will arrive at your location with only two-hours notice) hangs on a pole-thingy, and then injects directly into your bloodstream.

The Energy Drink My I.V. Bag Liquid Most Closely Resembles: Red Bull, with possibly some Monster mixed in. 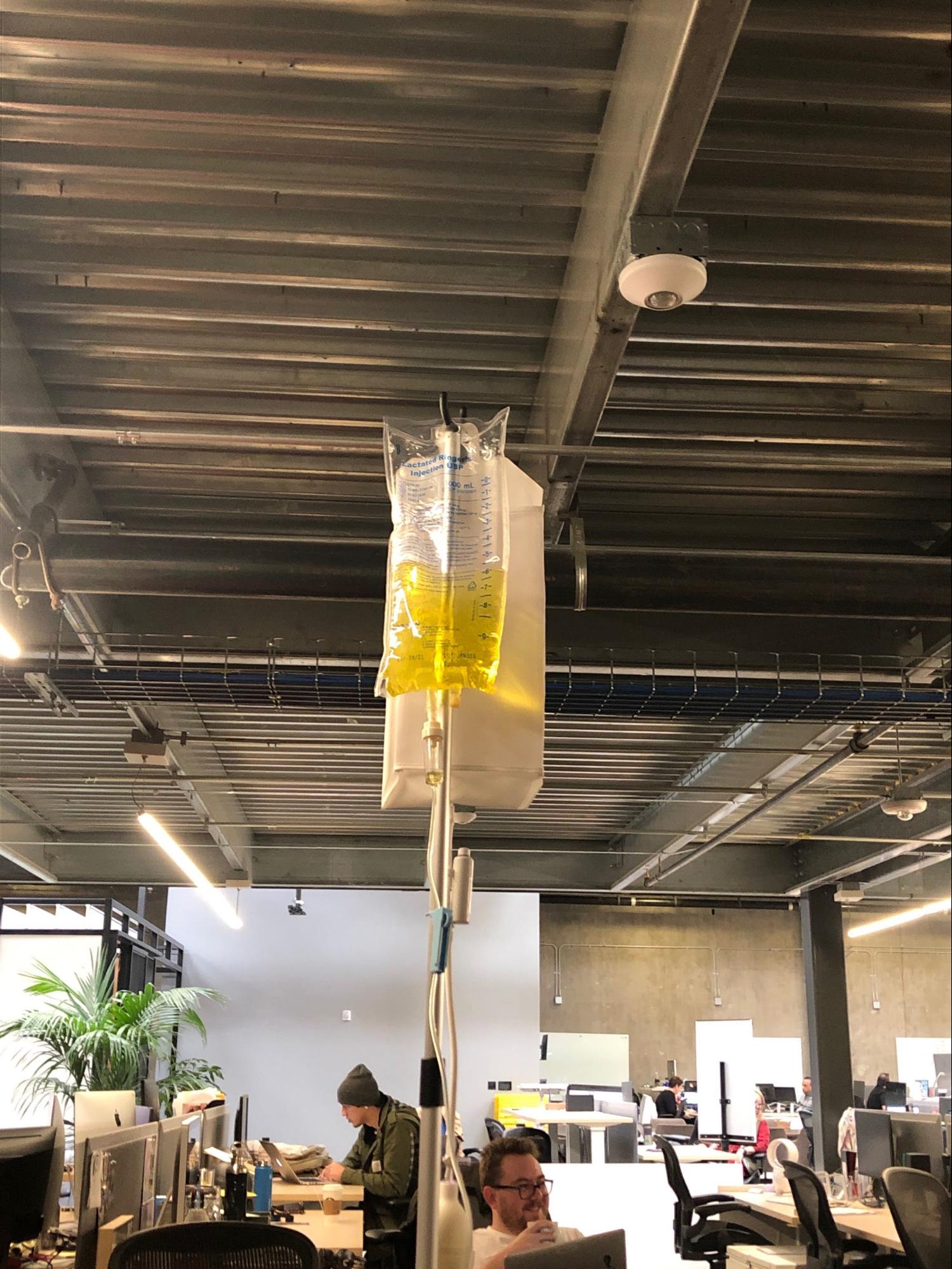 What the Science Says: I.V. fluid is, essentially, saline, a mixture of sodium chloride and water that when administered intravenously can rehydrate the body really quickly. Think of it like topping off you car engine’s oil with one of those quality brands of synthetic. Basically, your shit’s gonna run smooth.

Without boring you too much, the vitamins are all of the aforementioned “B” variety, which means they’re essential nutrients that play an important role in optimizing cellular function and in synthesizing and metabolizing things like carbs, proteins and fats.

Now what’s so great about getting these vitamins via I.V. versus chowing down on an entire bottle of Flintstones chewables? That all comes down to the uptake of the vitamins into your system. According to Healthline, “a vitamin that’s taken by mouth gets broken down in the stomach and digestive tract, and is limited on how much can be absorbed (50 percent). If, however, the vitamin is given through an I.V., it’s absorbed at a much higher percentage (90 percent).”

The Experience: I’m not a fan of needles — not so much the pain, but their size, and what they look like going into my arm. So I made sure to turn away and not watch as the nurse plunged what appeared, to me, like a chopstick into my vein. 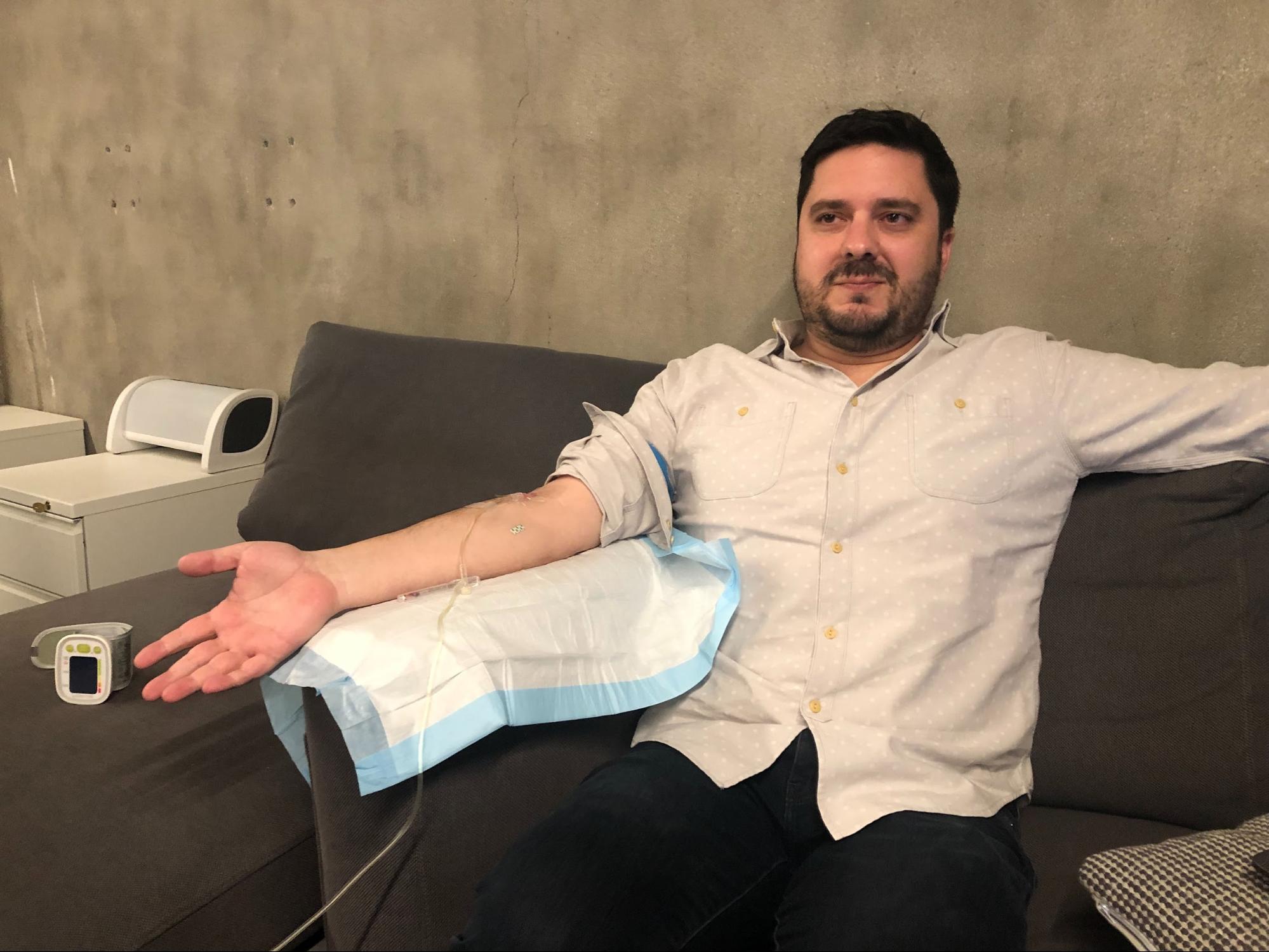 The first sensation you have is cold. Cold, as the Red Bull-colored liquid streams through the catheter and into your arm; and cold, as your arm begins to fall asleep from lack of movement.

The second sensation is harder to describe. It was a lot like the feeling you get when you drink a cup of strong tea, minus the caffeine jitters, mixed with a small amount of #Blessed. Perhaps it was the placebo effect, but I began feeling better almost immediately, and I was feeling pretty good to begin with.

If there was one let down in regards to expectations versus reality, it’d be that the “high” I’d expected wasn’t as lofty as what I actually experienced — it just kind of plateaued at merely “good.” Which, all in all, isn’t necessarily a bad thing when you consider that it’s seemingly one of those fad treatments that celebrities like Chrissy Teigen and John Legend have been seen getting on Instagram.

The Number of Times I Had to Pee Within An Hour of My Treatment: Three.

The Takeaway: Does an I.V. vitamin drip actually work? Absolutely, 100 percent, yes. Is this an exorbitant luxury for someone who just wants to feel good on their 35th birthday? Undoubtedly. Knowing what I know now, I probably would have waited to spend nearly $400 on this treatment until, you know, I needed it. Like, say, I’d just returned from traveling overseas and was dealing with really bad jet lag. Or if I was getting over the flu. I believe that, in order to realize the treatment’s fullest potential, your initial baseline of well-being needs to be in the toilet, essentially. That way the jump to feeling fantastic is far more noticeable. That said, I definitely felt really good and energized when my bag was empty. I’m just not sure I felt $400 better.