In ‘Raised by Wolves,’ Parenthood Is Hard, Even for Androids

This HBO Max sci-fi series depicts a future society in which humanity is nearly extinct and a pair of robots have to raise the last remaining children. If they can’t do it well, what chance do any of us have?

It’s comforting to know that, even about 150 years in the future — at a time when humanity has been all but destroyed — dads will still be doing dad jokes, even if they’re not actually dads or even human beings. In Raised by Wolves, the decent-so-far sci-fi/drama series premiering on HBO Max on Thursday, we meet two androids, Mother (Amanda Collin) and Father (Abubakar Salim), who are piloting their ship to a distant, seemingly deserted planet. They have with them six embryos, who they have been programmed to protect and develop into full-grown humans. Eventually, we’ll understand why: Earth was devastated by a war between atheists and religious believers — they call their deity Sol — and a few surviving atheists sent Mother and Father away to start over on a new world.

As we get to know Mother and Father, we recognize their detached, robotic demeanor — they look human, but they seem to have little in the way of emotion — but even though they’re androids, they can’t help but resemble their maker in certain ways. Within the first few minutes of the first episode, just as they’ve landed on Kepler-22b and are carefully trying to exit their ship before it plunges into a deep trench, Father says to Mother, “What did the male magnet say to the female magnet?” He’s trying to make conversation, but he’s also trying to cheer her up and connect with his fellow robot. Maybe some dad humor will do the trick. She plays along initially, but as Raised by Wolves moves from episode to episode, you’ll notice that she becomes noticeably less patient with his corny jokes. Things like that happen when you’re busy raising a family.

As a piece of dystopian sci-fi, Raised by Wolves (which was created by Aaron Guzikowski and executive produced by Ridley Scott, who directed the first two episodes) is perfectly solid and enjoyably familiar. Of Mother and Father’s initial six embryos, only one of them, Campion (Winta McGrath), makes it to 12 — the others die from diseases contracted from this alien planet’s hostile environment — and the three of them try to start a new society. Eventually, a group of Mithraic — they’re the humans who believe in Sol — crash-land on Kepler-22b as well, setting in motion a fresh battle between atheists and the religious. Not unlike the Battlestar Galactica or Snowpiercer remakes, Raised by Wolves examines the last remnants of humanity to see what’s eternally, sometimes frustratingly human about our species, while mixing in some political maneuvering and action sequences.

The show has a sleek slate-gray look, and after watching the first six episodes, I remain intrigued about where it’s going without necessarily planning my life around when I can catch the rest of it. But what gives Raised by Wolves its fuel is its shifting, droll portrait of parenthood, illustrating how even technologically advanced beings fall into traditional mother/father roles — and that, when those roles get switched, things can go haywire.

Mother and Father were only awoken once their ship landed, so they don’t know one another, but their programming quickly kicks in. Mother dutifully playacts the part of a mom, while Father is stereotypically paternal. (And he tells his silly jokes, of course.) Their behavior is stiff, though, and when Mother tries to smile in a warm way, like a mother would to her child, its uncanny-valley offness is upsetting. But as we’ll discover, Mother has other attributes. She’s actually a far more advanced robot than Father, which is extremely helpful because, when danger comes, she’s able to morph into a horrifying killing machine that can fly through the air at great speed. Father can only run, and not even that fast — plus, he can’t make enemies or predators spontaneously combust like she can when she screams. Some moms will do anything for their children.

Like a lot of binge-y shows, Raised by Wolves can be overwhelmed by its constant need to keep throwing plot twists at us — why would we keep watching if there aren’t cliffhangers every 45 minute? — so I need to be careful of spoilers. But what’s best about this series so far is that, once Father becomes aware of how much more powerful Mother is, it creates a crisis of confidence within him. Technically, he’s not a man, but he exhibits the exact qualities of a self-conscious guy who feels emasculated by his partner. Watching how that fact alters Father — and how Mother’s feelings about him change — turns out to be one of Raised by Wolves’ most fascinating attributes. Initially, they were united in their noble mission to raise these children — to create a new human race — but the same insecurities and power dynamics that affect human parents will start complicating the relationship between Mother and Father. Having kids can do that to you.

Sci-fi parables like this are meant to underline just how universal some situations, like parenthood, are. (And to be sure, last year’s I Am Mother traveled similar thematic terrain.) But while this series leans toward the humorless — preserving humanity is very serious business, after all — the few whiffs of wit come in how Guzikowski hints that raising children can sometimes be as fraught as war or extinction. Which is why it’s kinda perfect that Campion — for a short while the last living human child — is an absolute shit, willful and bratty and very much your usual acting-out tween. Raised by Wolves is less about the sacred bond between children and parents than it is about the everyday aggravations that make even the calmest of androids want to punch a kid through a wall. But, like in real life, Mother and Father can’t do that — they have to keep Campion safe, even if the little bastard will never appreciate it. Too much is riding on his continued existence.

Other children will soon come into Mother and Father’s orbit, only further complicating their relationship once it becomes clear to everyone in the “family” that Mother is the one to fear. After all, she’s a literal killer — by comparison, Father is a bit of a softie with his dad jokes and pleasant demeanor. (You’d say she wears the pants if these androids weren’t decked out in synthetic bodysuits.) Maybe every parenting couple divides up into one of two roles — the “tough” parent and the “nice” one, the good cop and the bad cop, the boss and the person who backs up the boss — but Raised by Wolves explores how those designations start to define people and ultimately drive wedges between themselves and their partner. Mother and Father aren’t programmed to be a loving pair, but Salim’s dispassionate face nonetheless does a good job of suggesting Father’s wounded pride as Mother assumes her spot as head of the household. How can a robot be a good parent if he’s worried that he’s lost his partner’s respect? The more obvious it is that Mother makes the decisions, the more Father will have to decide how to respond to reaffirm his standing. Nobody wants to be the uncool parent. 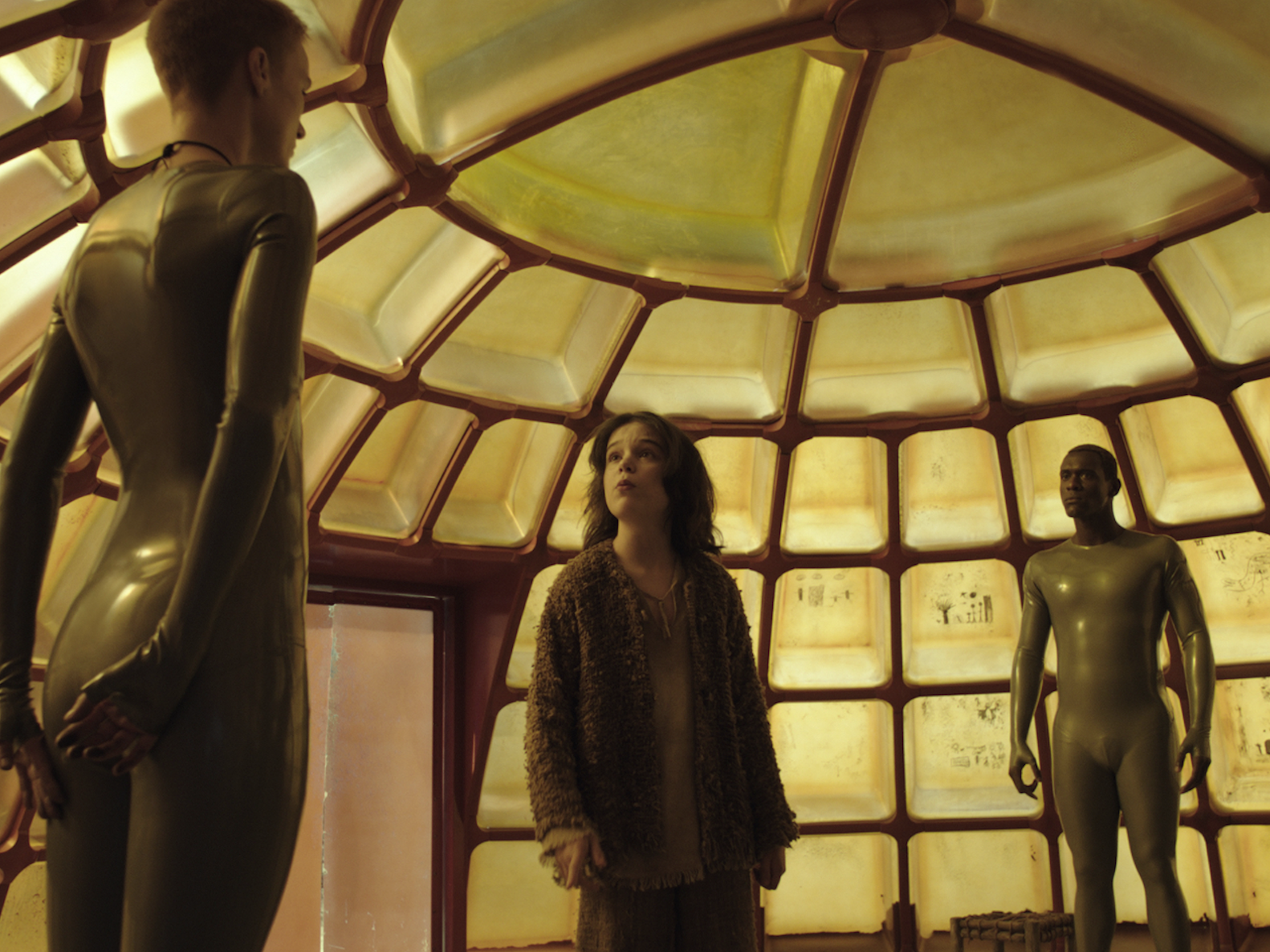 There’s a parallel storyline going on in Raised by Wolves that, thus far, just isn’t as interesting. It concerns Marcus (Travis Fimmel) and Sue (Niamh Algar), a Sol-worshiping couple who are among the passengers that crash-land on Kepler-22b. They’re not all that they appear, however, but for our purposes, let’s just say they find themselves with a son, Paul (Felix Jamieson), who isn’t really theirs — and who ends up living with Mother and Father. But even though Paul isn’t their blood, they have a strong connection to him. (The show hints that, perhaps before the war, Marcus and Sue tried and failed to have kids of their own.) But like Marcus and Sue — who look flabbergasted when they first meet Paul, who thinks they’re his mom and dad, uncertain how they’re supposed to behave — Mother and Father are just trying their best to be good providers. Maybe all parents are just faking it that they know what they hell they’re doing.

At the end of the last episode HBO Max made available to critics, Raised by Wolves builds to an ending in which humanity and androids will do battle over the fate of these children, and what’s ironic is that, like Campion, the other kids are a handful, too. Some have dealt with trauma, some are just brats, but they all require the care and protection that parents supply. (Turns out, Kepler-22b is filled with scary threats.) But whether it’s the shifty Marcus and Sue or the mechanical Mother and Father, the show’s kids are often at the mercy of imperfect role models, who are too caught up in their own baggage to fully be there for their offspring. There’s surely a metaphor in there: That any child makes it to adulthood is a miracle considering who raised them.

As Raised by Wolves begins, Mother and Father walk off their ship into their newfound Eden, flawless tools specifically designed to foster the next generation. But after six episodes, they look as overwhelmed as every human parent I know. Not having kids, I’m always impressed my friends have the ability to do it. I always think of them as machines. But Raised by Wolves argues that the job will cause even the most efficient to eventually break down.