Rage Against the Machine Is the Boomer Energy We Need

Ticket prices aside, the oppression that fuels the band’s music remains all around us — and so does the catharsis of the mosh pit

It’s been 13 years since the last time Rage Against the Machine ever played a concert, and almost 20 years since they officially disbanded. It’s not a given that a zeitgeist-y rock band can return from the grave and make a meaningful mark on the culture again. But if the mass rush for Friday’s ticket sales were any indication, people still really want to lose their minds to the loud, swaggering, fuck-off political rock pioneered by Zack de la Rocha, Tom Morello, Tim Commerford and Brad Wilk.

Whatever the case, like everyone predicted, the ticket chaos lived up to the hype. Shows sold out in a matter of minutes, and stragglers stuck in the queue started seeing outrageous prices upwards of $600. The punchline was almost too easy for pissed-off fans and amused haters alike: What were these guys raging against, exactly? Couldn’t be capitalism! The mocking headlines flowed forth. As one Washington Examiner op-ed scolded: “They just jumped into the musical equivalent of the swamp. Good luck maintaining your countercultural street cred after this.”

And, on its face, it feels like the perfect metaphor in motion for the times: An aging quartet of 50-year-olds getting exposed as being far less radical than their decades-old anti-capitalist lyrics would suggest. Of course RATM are part of the ruling class now. This is the way the system works. It feels like a cash-hungry pivot to banal hypocrisy. And it looks like the end of their rebellious relevance — whatever existed of it, anyway.

Nevermind the fact that ticket prices for major concert tours have nearly quadrupled from 1996, thanks to the crumbling of profits from album sales and the consequent shift to profitizing live performances. Nevermind the fact that few big-time artists make any effort to address this, and that mediocre seats for acts like Lizzo and Taylor Swift routinely cost hundreds of dollars. Nevermind that brokers like Ticketmaster and StubHub are the actual winners thanks to the power of demand pricing and backdoor deals that equate to, basically, corporate-approved scalping.

The ironic part is, Rage itself predicted the criticism it would receive, and devised a plan that few other big-name artists have bothered to brainstorm, let alone implement. The band capped the price for all tickets at $125 before fees, and worked with Ticketmaster to reduce the inflation on its resale platform. Rage also scooped up 10 percent of all seats on each tour date in a move to cut down on scalping, reselling the tickets slightly under market prices and donating all proceeds beyond the initial $125 per ticket to local activist organizations.

That doesn’t matter much to the mass of people claiming this is just another liberal con job in action. It’s also not very surprising, given it’s a criticism that’s been trailing the band ever since they hit the mainstream in 1992 with “Killing In the Name” (a massive but unlikely radio hit, given it includes 17 utterances of “fuck”). That single buoyed their eponymous debut record on its way to triple-platinum sales for their label, Epic Records. They signed with the industry giant only under the promise of creative freedom; true to their word, RATM remained dedicated to leftist politics across four albums, delivering noisy social criticism and tossing middle fingers at every possible authority figure, whether it was Saturday Night Live or the New York Stock Exchange.

But for some, the fact Rage was succeeding and gaining mainstream acceptance was proof of its artifice. As a typical take goes: “They may have been raging against the machine, but they sure weren’t complaining about the millions of dollars they made while being part of that same machine,” one redditor wrote last year. “I honestly couldn’t care less about them not censoring themselves on SNL or any other public cred events that happened. They wouldn’t have a career if it weren’t for the machine.”

If this criticism sounds familiar, though, it’s because you’ve heard it before. It’s the same gotcha complaint that people throw at Bernie Sanders for daring to call out capitalism’s failings despite accumulating wealth in his own life. Elizabeth Warren has heard it too, as if pointing out the inequalities and failures of Wall Street is null and void if you have an investment portfolio. There are shades of gray in these conversations, but so often, it devolves into a reductive contest about who gets to say anything at all. That Rage has already pledged to give away more than $3 million in tour revenue isn’t enough for the reply guys in the comments, because Zack de la Rocha and Co. have more money than us!

Apparently, the band didn’t get the memo that being radical means you’re obliged to give your money away all the time, regardless of how ineffective philanthropy is as an actual equalizer in the world. It’s basically that “society” meme: 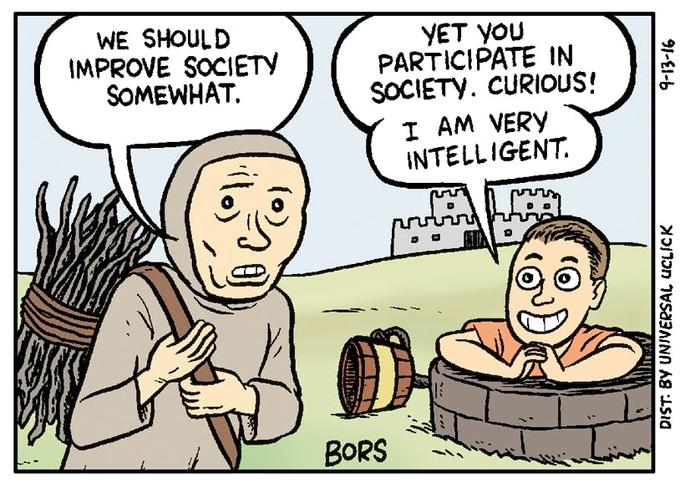 But in a different light, those ticket prices are a simple testament to the bond people still feel to RATM in 2020, and it’s almost depressing how much of their message still applies. They were ahead of their time in calling out corruption on Wall Street and how money poisons the representative democracy that runs America. They protested industry censorship by standing naked on stage to droning feedback, pissing off all their fans in the process. They criticized the Democratic National Party in 2000 for its machinations and derailed the convention with a riot. De la Rocha got in trouble for telling a Coachella crowd in 2007 that George W. Bush and his entire administration should be tried as war criminals and be shot when found guilty. They threw their weight behind the Zapatista Movement in Mexico and rallied for the release of the controversial activist Mumia Abu-Jamal, whose conviction in a cop-killing case has been criticized ever since.

Morello even found the time to piss on Paul Ryan (via Rolling Stone op-ed) when the latter claimed Rage was a favorite band of his. In the process, Morello basically condemned every chud who claims to “like their music, but hate the lyrics.”

Arguably, no musical act has ever had the will to be this radical in public and get away with it, let alone amass legitimate mainstream attention and inspire leftist thought in several generations of impressionable youth. We’ll have to overlook how Morello’s insane riffs, coupled with the rhythms from Wilk and Commerford and de la Rocha’s machine-gun lyricism, led to the rise of nu-metal. But to weave such vivid vitriol against the status quo into radio-ready bangers is a feat that deserves respect, then and now. And the notion that the band could put aside their egos, make peace and return to have fun again is, in Morello’s words, “a small miracle” worth celebrating, too.

For now, let us lean into the ridiculousness of Rage making a return in 2020. The image of them taking the stage at Coachella and blasting off the faces of a bunch of confused 20-year-olds is the only kind of Boomer energy we need. The corruption, violence and oppression that fuels the band’s music remains all around us, seemingly in permanence. So does the catharsis of the mosh pit. Odds are, some Gen-Z kid will walk away enraptured by the blend of woke shit and headbanging that made 1990s kids fall in love, too.

Everything old really is new again.