Our next phase of pandemic denial is bogus medieval role-play

Unvaccinated people are dying. They are, to be precise, 11 times more likely to die of COVID-19 than people who got one of several vaccines that protects against the virus. But they aren’t going quietly. Some are denying the reality of the pandemic on social media to the bitter end. And now they’re attempting a rebrand: No longer content to be (accurately) described as “unvaccinated,” they want a more positive label. Something regal. They’re “purebloods” now. 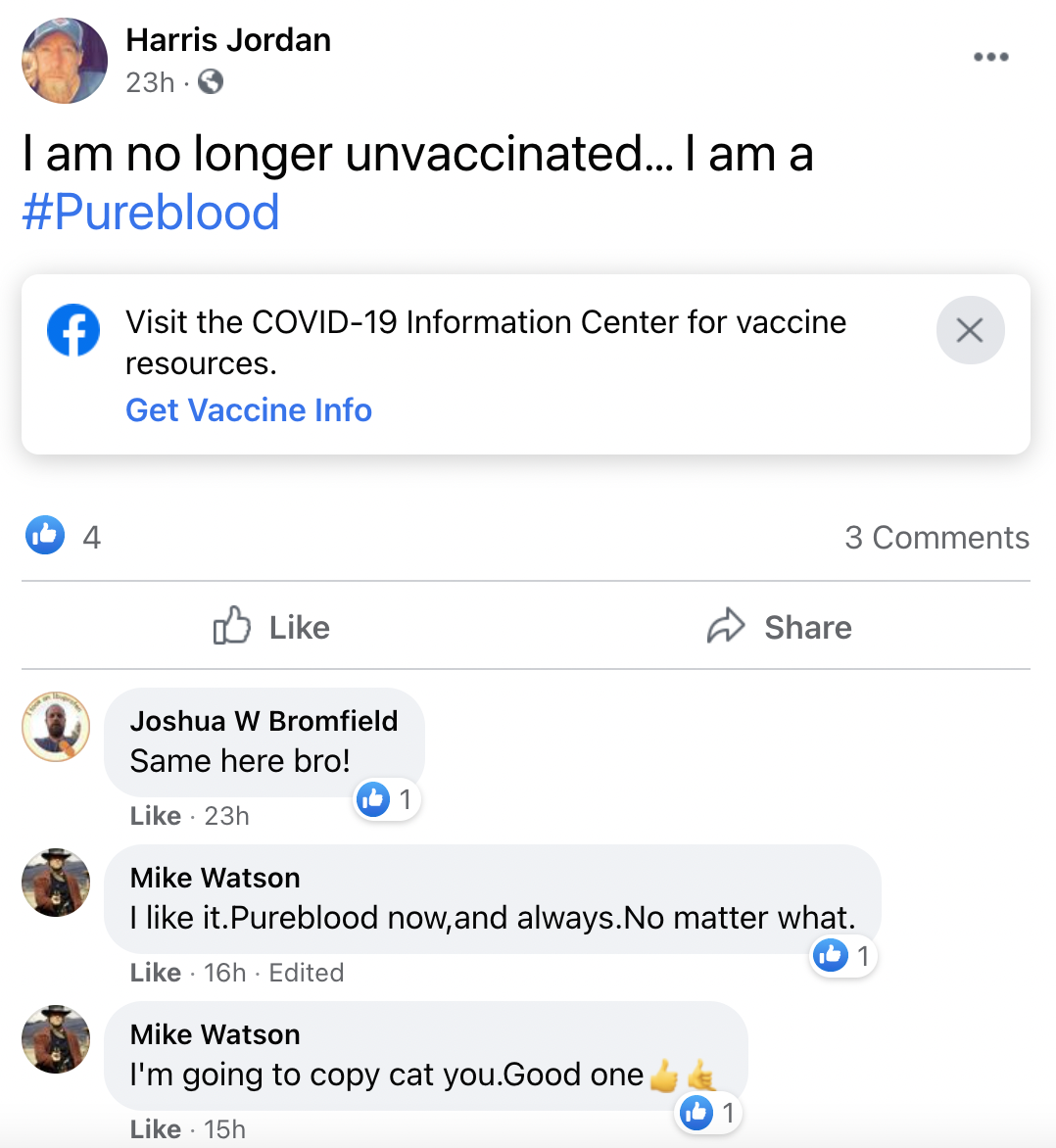 As reported by Tess Owen at VICE, adoption of the “pureblood” term became a disturbing trend on TikTok, where it was boosted by anti-vaxx influencers, and has migrated to all corners of the web. Its obvious pop-culture antecedent is J.K. Rowling’s Harry Potter franchise, in which some wizards claim superiority through their “pure-blood” families, free of any non-magical persons called “muggles.” That these characters were the villains of the story seems to have made no impression on the unvaccinated purebloods of the real world, nor have the parallels between Rowling’s depiction of genocidal evil and the rise of Nazism in the 20th century. One can only conclude that they’re happy to spell it out: They now regard themselves as a master race.

You could brush this off as the shared delusion of nutjobs who have already refused life-saving drugs for no good reason. To me, however, it looks like a significant evolution of their rhetoric and thinking. The unvaccinated have begun to feel like the victims of “discrimination” in a country where employers are increasingly requiring vaccination; throughout this summer, Republicans have pandered to this demographic by pushing bills that grant them the same protections given on the basis of race, religion and gender.

Yet for all they may enjoy the myth of their valiant resistance despite persecution, it won’t placate them forever. They need to be the protagonists — the heroic crusaders leading the righteous to victory. Just as the QAnon cult, faced with a Biden administration, spins elaborate conspiracy theories to explain how Donald Trump is actually still in power, the unvaccinated will build out a fantasy of their triumph even while they continue to catch a preventable, dangerous disease. 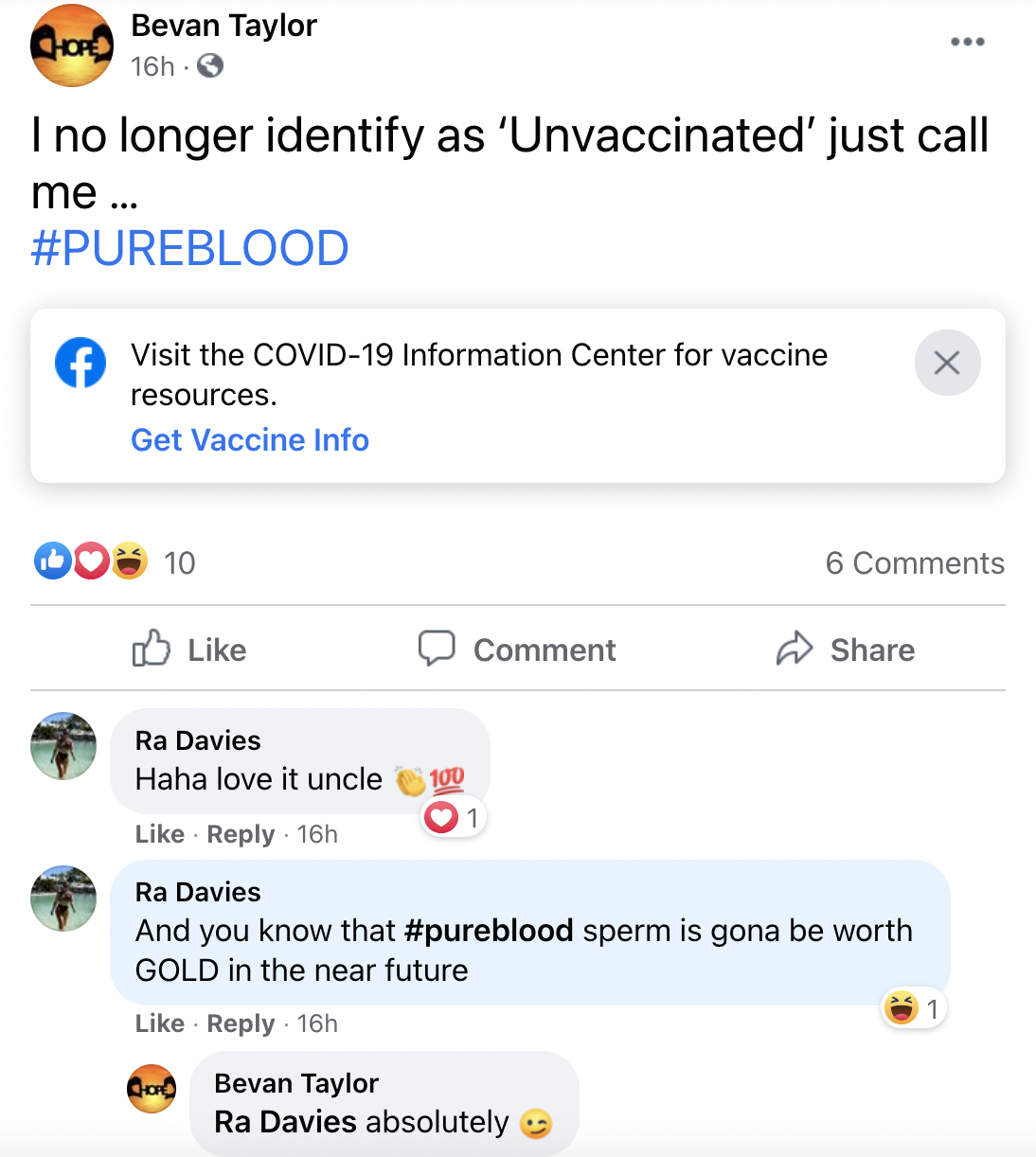 Whereas many vaccine skeptics have argued in “scientific” language in the past few months — spreading baseless rumors of toxins, microchips, magnetism and plots to turn humans into some kind of 5G mainframe — “pureblood” opens a direct line to the Christofascist movement represented by the QAnon community and similar far-right groups. This is much closer to the conviction that vaccines are Satanic or a way to administer “the mark of the beast” than any handwringing over “evidence,” “research,” side effects and FDA approval.

It’s as if, running out of remotely plausible excuses to avoid the shot, they’re giving up that pretense of rational debate and embracing their destiny as holy warriors, guided only by faith. And it’s this “pureblood” rhetoric that brings them closer into alignment with the kind of neo-Nazis who cloak themselves in medieval iconography and role-play as the modern Knights Templar, spouting off about the honor and purity of white, Eurocentric culture. Always the other side of this coin is violent hatred for “impure” peoples, and propaganda such as blood libel, the centuries-old accusation that Jews practice ritual murder. (Today, it’s George Soros leading a cabal of demonic pedophiles.) 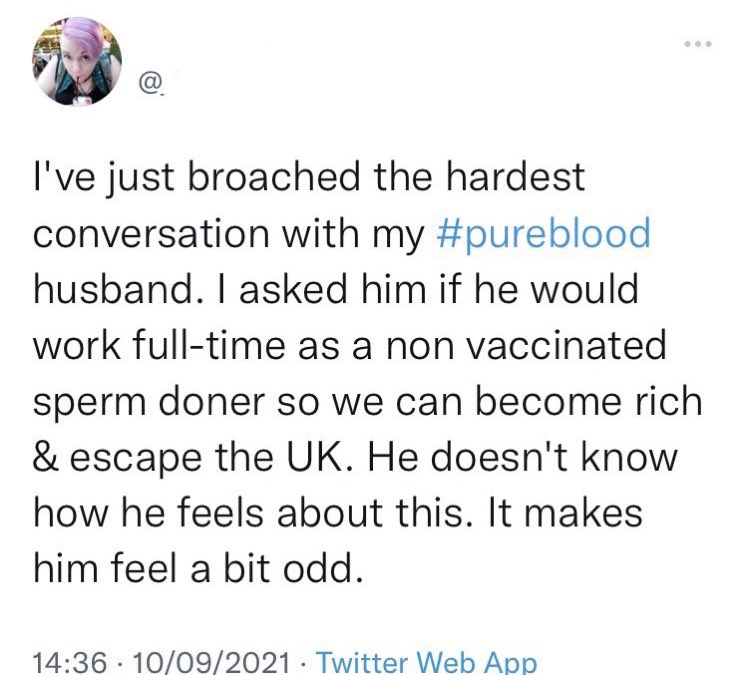 In their growing obsession with “pureblood” sperm as a hot commodity, the anti-vaxxers’ drift toward eugenics is unmistakable. Forget all their concern for freedom of choice and insistence on receiving the same privileges as the inoculated: This is a whole new paradigm, totally unmoored from the dynamic the rest of us are seeing. Why fight logic and medical advice when you can declare yourself the winners and smear your enemies as polluted subhumans?

The old standby of white supremacy maps perfectly onto the belief that you were anointed to survive a plague — that you’re simply stronger, smarter, better than the dirty masses clamoring for the devil’s needle. And if that concept trickles up to the political class, it may spawn an ever-more extreme agenda, one that seeks to legally enshrine the categories of “pure” and “compromised.”