The trick? You can fake your way through it without anyone really noticing

Even if you’ve never read any of Oscar Wilde’s works (ahem, get thee to The Picture of Dorian Gray, stat), you’ve surely heard he was one witty sumbitch. “Be yourself; everyone else is taken” is one of his famous quips. “True friends stab you in the front” is another.

What you probably don’t know is that Wilde admitted he used to devour the newspaper and current events in his downtime, practicing one-liners and witticisms at home, so that when he attended dinner parties or social gatherings, he could be the most outrageously clever man in the bunch.

Of course, that doesn’t mean Wilde, one of the greatest humorists of ever, was some sort of phony; he had a voracious intellect. It just means he was extraordinarily good at making his spontaneous wit seem easygoing and natural, even when it took a lot of work.

In essence, that is a big part of the strategy for being able to speak in the moment or off-the-cuff. To be clear, it’s not about stocking up a library of profound witticisms, but simply producing relevant commentary (or a graceful exit) on the fly without looking too rehearsed. And when you can’t do that, you’ll need to be able to fake it.

If the Wall Street Journal is to be believed, we ignore this at our peril. In a guide from Sue Shellenbarger on how to overcome one’s terror at ad-libbing a speech, we learn that not only is this skill ranked as a greater fear than spiders or snakes, it’s also a career killer:

Performing poorly can do serious career damage. Matt Abrahams, a lecturer in organizational behavior at Stanford University’s Graduate School of Business, saw a former co-worker on a previous job deliver a strong presentation. During the ensuing Q&A session, however, “he froze, and his answers were contradictory and rambling,” Mr. Abrahams says. His reputation damaged, the man soon left the company.

Yikes. That seems a bit overstated, but it’s not hard to believe that nailing it when your boss asks your thoughts, or you run into the company owner in the elevator and have a chance to make an impression, or you find yourself in an achievement situation and everyone starts chanting SPEECH! SPEECH! SPEECH! is the sort of life skill that could pay off in the long run.

The question is how can you be prepared for the unexpected? The central skill involves two facets. The first: not panicking, which short-circuits your ability to think straight. That’s when you get off-color jokes and cringe-inducing awkwardness. The other key ingredient is where Wilde comes in: keeping certain types of responses in your back pocket to buy time or get more info so you can answer better.

To handle the first part, Shellenbarger cites sources who say you should redirect that anxiety before it mounts. While this makes sense, it’s easier said than done. After all, being called on out of nowhere to give some thoughts on a new product or direction gives you little time to talk yourself off the anxiety ledge. Telling someone to run through all your self-soothing mantras the second you’re put on the spot is like telling some to get a good breakfast the day they’ll be surprised at work.

That said, you can still fake your way through it without anyone really noticing. Here are some of the best tips across the literature on how to do it.

Some of the best tips out there involve buying yourself a little time to think through an answer real quick. You can definitely pause briefly, even if it looks like you’re thinking it through, before answering. This is not a sign of failure; it’s a sign of being a thoughtful person who thinks before they speak. Some experts suggest you could kill 10 to 15 seconds this way. That seems a bit much, but a brief pause isn’t going to set off the alarm bells.

Restating the question before answering it not only accomplishes the above stalling, but it also lets you appear “polished” and in control, according to some tricks on LinkedIn from author Greg Cieply. You have time to think about what you’re going to say while also keeping the answer relevant, avoiding the dreaded rambling that distracts from any good message that might actually be buried in what you’re saying.

3. Answer It Another Way

I’m a big fan of admitting when you don’t know the answer, but also showing that you have a thoughtful take that’s helpful and related and part of the issue at hand. If your boss asks your thoughts on the status of a project and you’ve yet to even start it, or you have but only in such a cursory way that you have nothing like real feedback, you can still highlight a relevant or important aspect of the issue. “We’re still in a preliminary enough stage that I can’t give you a full report, but what I can tell you is that we’re seeing good momentum in the following areas…” Or, “I’d like to do more research to give you a more accurate answer on that, but it has made me wonder if we couldn’t also approach it from another way.”

4. Turn the Question Back on the Asker

When you’re asked to respond to or elaborate on something you really have no answer for, another great way to buy time in order to flesh out a response (or a dodge) is to reframe the question back at the asker. Whether it’s to ask how they meant the question, or if there’s a specific aspect they’re most interested in hearing more about so you can better focus your answer, it’s a great way to gather more information. It’s okay to say you hadn’t thought of that particular question, particularly if you’re doing so in a way that suggests you admire the asker and find the question challenging in an impressive way. Even a simple, “Wow, that’s a great question — can you elaborate or give an example of what you mean?” is both stalling, information-gathering and flattering. Win-win-win.

There are a couple of different patterned response approaches floating around out there about how to think through your answers, all of which have some value and are really up to the individual and the scenario. One is pretty straightforward: Say, “Why? One of the reasons why is…” and then “Another one of the reasons why…”

If you’re giving an impromptu toast, Lifehacker offers a simple framework that can ease the process of what you’re supposed to say: a greeting, an event statement, common ground, why you’re speaking and a call to action.

“’Sup y’all? We’re obviously here because Uncle Jordan is dead. Like all of you, I won’t be missing J-Dawg because he was a huge dilrod. I’m the best person to say that because he still owes me $20. So let’s pour one out for our homie, but also ourselves, because the reign of terror is finally over.”

Another very commonly cited approach to impromptu speaking is PREP. In every answer you give, address your Point, Reason, Example, and Point again.

Public speaking expert Allison Shapira breaks it down like this:

As Shakespeare’s Hamlet said in 1602, brevity is the soul of wit. And as I am saying now, looking normal is the soul of impromptu speaking. Keep it short, and try to do your best at seeming like a normal, human-headed person that is reasonable and likable, not some weirdo.

Cieply suggests using a famous quote, a few lines of a poem, a joke or an anecdote to fill out that space in your off-the-cuff answer — such as when you’re taking questions from a group. These are also delaying tactics but they do double duty, giving the impression of wit and polish. Your selections should be relevant to the issue at hand, of course, or it will seem like an absurd non sequitur.

That’s where Oscar Wilde comes in handy. Being well-read not only helps you generally make better conversation with anyone anywhere, but particularly in moments like this. The more you read, and think, and interact with people, the easier it will be to interject a good tidbit to make a point, or recall an anecdote that punctuates the essence of your answer.

Of course, we don’t need to try to be as witty as Oscar Wilde. Nor should we! It’s highly unlikely any of us ever will be. But if we can be even half as good at faking it as he was, we’ll do far better than anyone expected of us. And isn’t that the point? 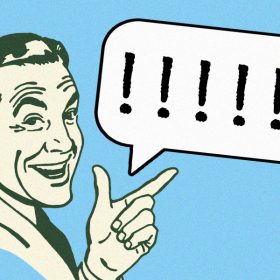