Betting Big on PredictIt, the Chaotic Stock Market of Politics

In his case, the “market” isn’t stocks — it’s a website called PredictIt.org, a university research project that lets users bet on the odds of anything they can find. Like playing the stock market, the goal is to buy low and sell high.

For example, let’s say you believe there’s a good chance Joe Biden will choose Elizabeth Warren as his VP. You can purchase shares toward Warren’s odds, then sell them when you think they’re overvalued. If you think he may lean toward Kamala Harris, and public opinion might shift with the news cycle, you have to strike quickly while her stock is low. 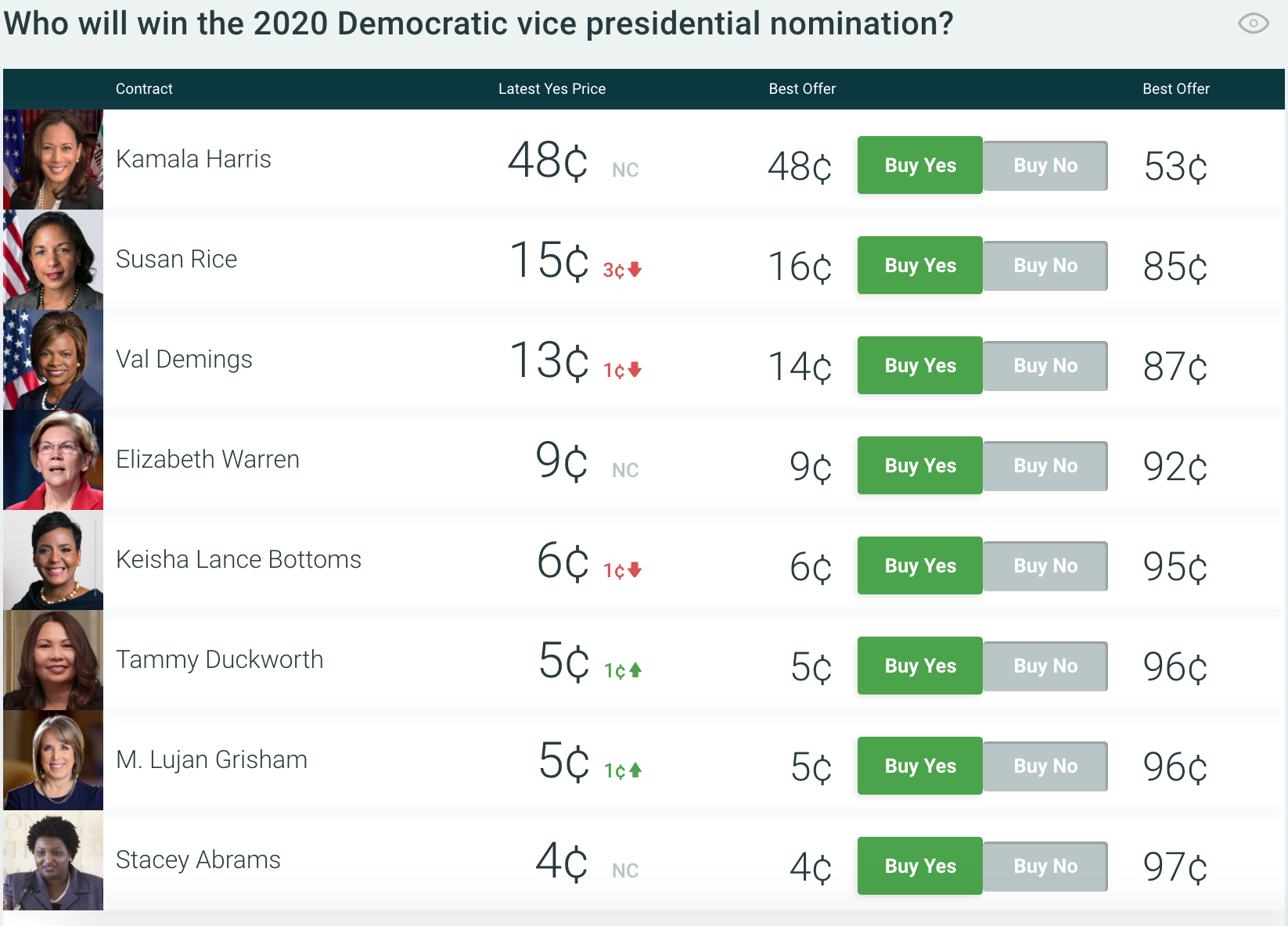 “The price of a share, between 1 and 99 cents, corresponds to the market’s estimate of the probability of an event taking place,” PredictIt’s FAQ explains. “Buy ‘Yes’ shares when the price is too low, when you think your fellow traders are underestimating this likelihood. Buy ‘No’ shares when you think they are too optimistic.”

You also don’t have to wait for Biden to pick a VP to win. If Warren’s stock starts to wane because the presumptive Democratic presidential nominee signals he’s favoring someone else, you can dump your Warren shares (ideally, for more than you paid for them). This is exactly what Brian, a 34-year-old in Connecticut, recently did. “I sold my [Warren] shares after the BLM protests and invested in Kamala [Harris] instead, since I think that’s the direction he’ll go,” he explains.

According to PredictIt’s market, Brian made the right choice: 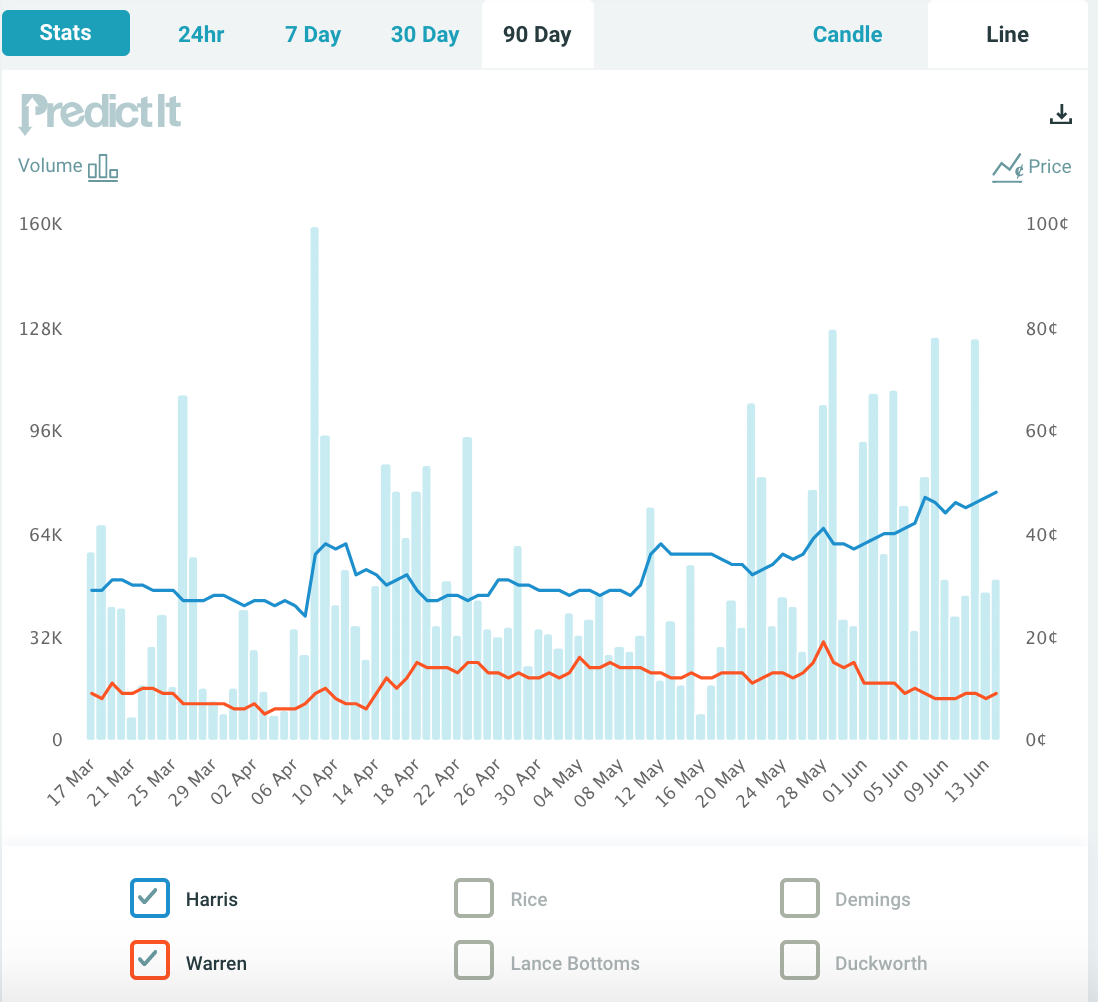 As for strategy, Shawn offers, “I compare the sample size of the polls and methodology. While there’s some guesswork on how much certain news will influence the final numbers, it’s a lot easier to predict a result than something where there’s less public information and less of it is objective.”

He’s referring to both the actual stock market, which clearly makes no sense whatsoever lately, and other, riskier PredictIt investments (in his opinion at least). “I avoid markets based upon a decision Trump might make, like to give clemency to Michael Flynn, because he can be pretty erratic, such that even journalists who watch him closely are sometimes surprised,” Shawn continues. “Occasionally, I’ll throw a few bucks into one, but those markets feel more like a roulette wheel than buying stock.”

It cost Brian about eight grand to learn a similar lesson. “I haven’t done great on quick stuff, such as how many times Trump tweets, because I don’t have enough information for that,” he tells me (though he admits that these payoffs are usually larger). “Say Obama is going to give a commencement speech, and there’s a market for how many times Trump tweets the next day. If you get in early, you could buy options very cheap,” Brian explains. “But because he can fire off 20 in a minute if he gets hot, the market can fluctuate a ton, which means people will trade like crazy on it.”

At the same time, Trump might not tweet at all, which has burned Brian in the past. In fact, he says the last time he invested in Trump’s tweets, the market was for predicting “how many times he would say ‘Sleepy Joe’ in a week, but he dropped none.” 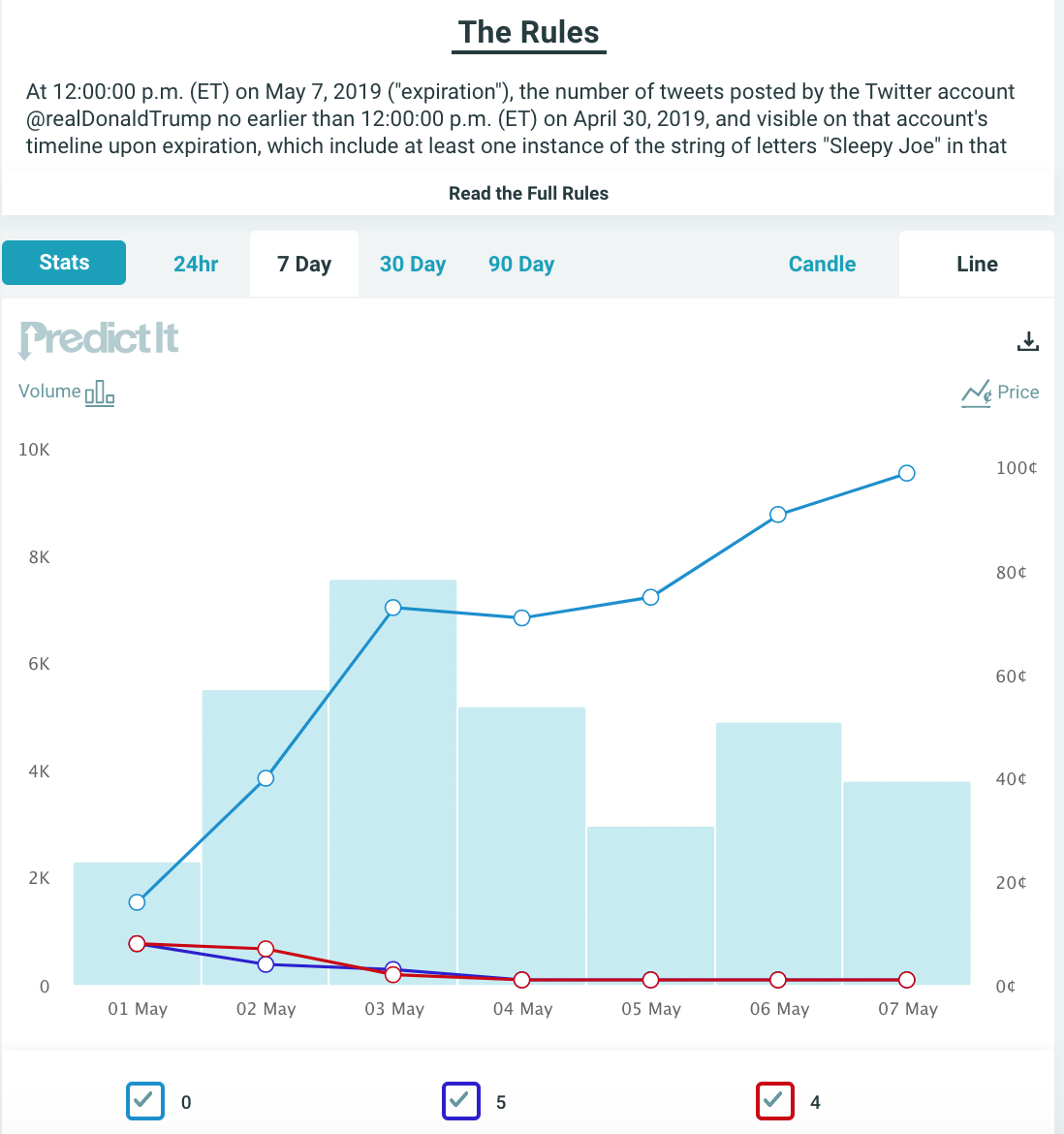 Either way, it’s typically the people who alternate between Twitter and PredictIt all day who have a better chance at winning big, because they can buy or sell before the bulk of the market reacts. “You have to pay close attention,” Brian says, “and I just can’t follow that dude on Twitter all day.”

Joe, a 38-year-old in Virginia, plays another game altogether: buying low across a wide swath of markets that have no business being gambled on at all. “The thing about PredictIt is they cap investments in each market at $850 per person. That buys a few 99-cent shares, but many, many penny shares,” he explains. “It creates a massive supply of crackpot money.”

Basically, Joe “mainly bets against conspiracy theorists and Trump fanatics” who put money on things like “crazy election predictions, or so-and-so gets arrested next week.” Say, for example, the QAnon rumor mill runs wild, and a slew of tinfoil hats hammer the “Yes” on “Will a federal charge against Hillary Clinton be confirmed by June 30th?” That lowers the “No” stock to 93 cents a share, “suggesting a 7 percent chance of it happening, when it should never be more than 1 percent,” Joe says. He then goes in and buys up the deflated stock before it inevitably rises back to 99 cents. 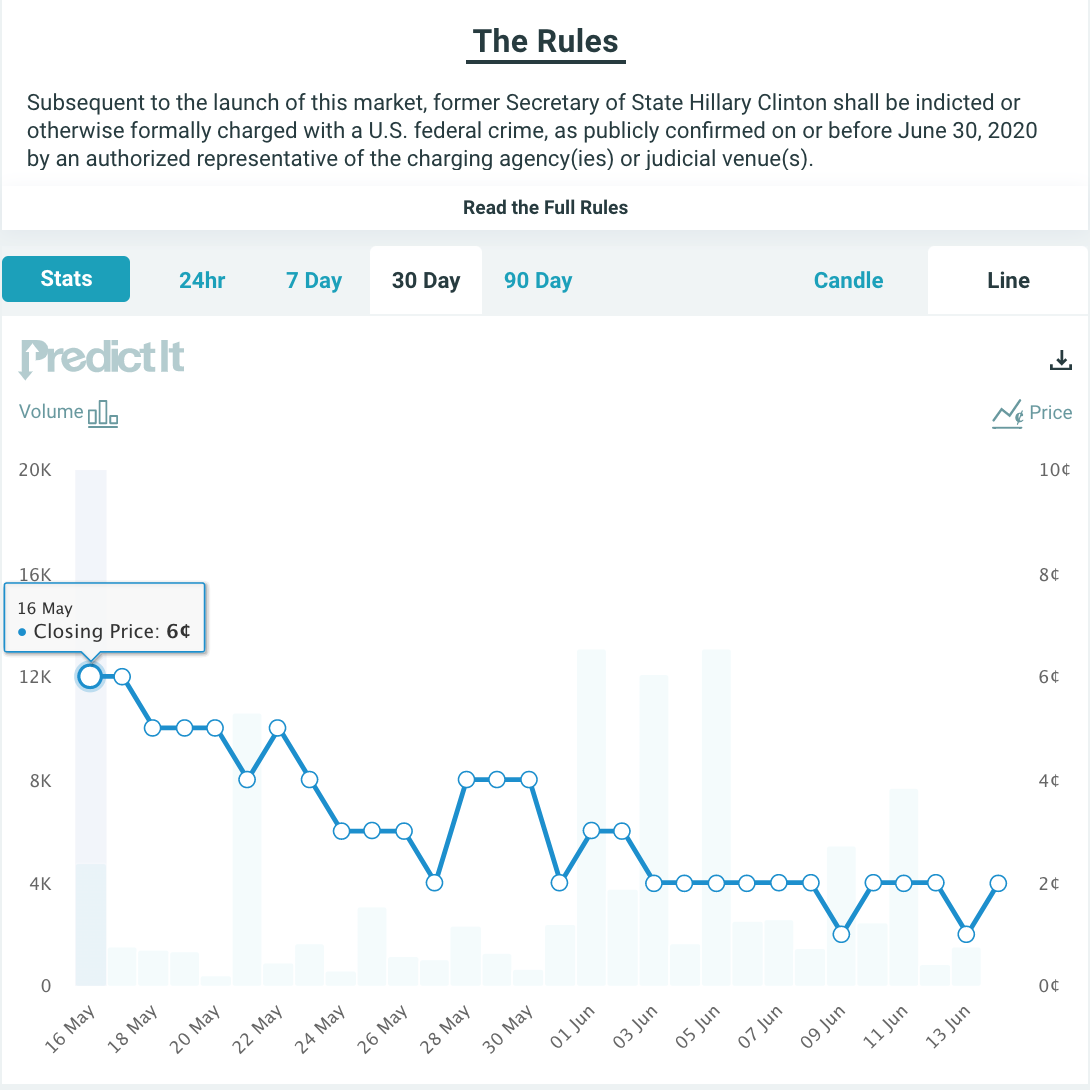 A few of his easiest wins? Betting that President Trump wouldn’t win the Nobel Prize, that Clinton wouldn’t win the 2020 Democratic presidential nomination and that Andrew Yang would lose in the primaries. Or as he puts it, “Honestly, QAnon has been great for bringing in dumb money.”