The Manosphere Thinks OnlyFans Is the End of the World

If you’re at all familiar with the manosphere — a digital ecosystem that includes “men’s rights activists,” red pill dudes, incels, pickup artists and men going their own way (or MGTOWs) — then you know that it’s full of unhappiness. For whatever reason, congregating day after day to post about your hatred of women and feminist culture doesn’t help to brighten your outlook on life. Even guys who have not yet adopted the manosphere’s most extreme fatalist ideology, sometimes called the black pill, believe that we’re in a state of advanced civilizational decay, history’s most tragic nadir, and all signs indicate that we’re on the brink of a deeper abyss.

One of those harbingers is a content subscription service you may have heard about: OnlyFans. 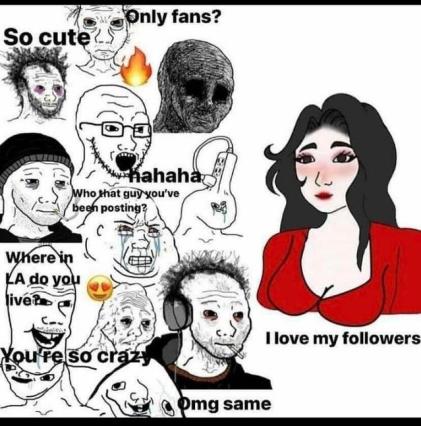 “It’s very cruel that some women can earn more than I ever did in life in a span of couple of hours just by showing her body parts,” wrote a member of the incels.co forum. “They can go on to live their dream life unhindered by economic issues while I’m tied to a chain and every time I wish to ascend to a higher level in life I’m dragged down by a never ending stream of issues.”

On 4chan, someone advised the board that OnlyFans and legalized sex work were unstoppable forces, part of a continual collapse that isn’t worth the effort to fight. “The west is already doomed,” they concluded. “Might as well embrace the degeneracy.” 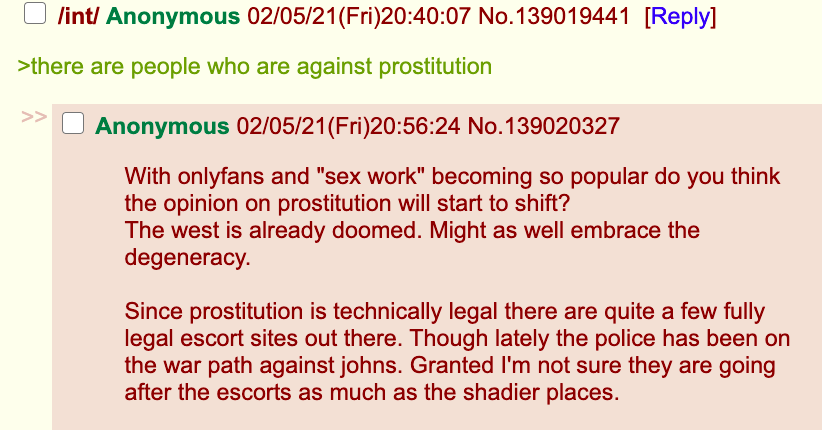 Some of this is down to a misunderstanding of the business. The manosphere takes it as a given that women are raking in a fortune on cam sites and the like, regardless of appearance or talent, becoming rich without getting out of bed. The truth is, it’s an endless grind, and far from easy to keep the profit flowing. But the impression that every OnlyFans performer is swimming in simp money leads to a second, bigger worry: These women are achieving financial autonomy. This in itself is apocalyptic. 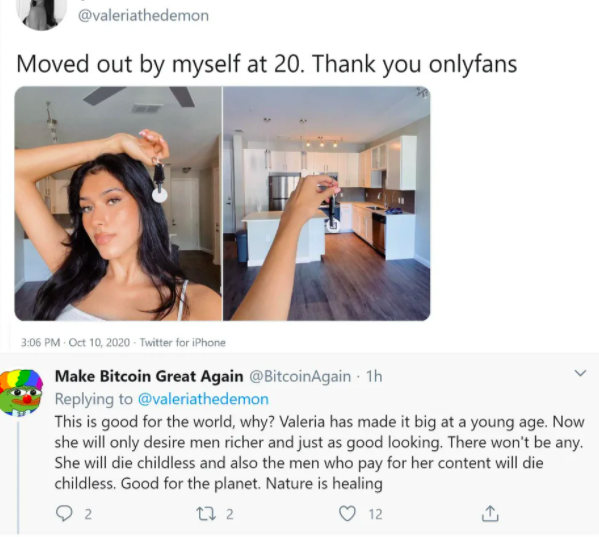 Any degree of freedom for women is unacceptable to men who despise them, and these men have nearly the same contempt for their peers who “enable” this livelihood. The incels, MGTOWs, et al see male subscribers as desperate, deluded and trying to gain “woke” cred by shunning possibly exploitative mainstream porn to pay independent creators who may not meet the manosphere’s insane criteria for feminine attractiveness. Importantly, this also limits their ability to expand the movement. “The fact that so many men pay for onlyfans proves that there are x100 more incels in denial than actual incels who understand their situation,” one incel has observed, adding that he’d rather hang himself than “pay a penny to these hoes.”

OnlyFans, then, both releases women from traditional domestic dependence (worse, it can turn her into the primary breadwinner alongside a “cuck” boyfriend) and curbs the radicalization of lonely men who are assuaged by semi-personal connections to their favorite models. Such an inversion of power, as the resentful see it, wrecks the natural order of the world. It’s the feminist endgame. 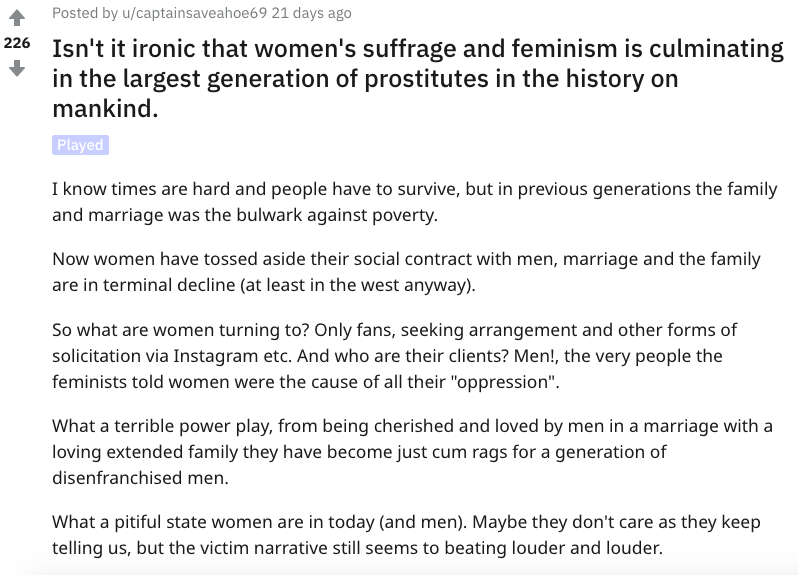 For the extremists and haters, there can be only one silver lining to OnlyFans: humiliation. They envision a future in which the “whores” are forever dogged by their willingness to pose nude in youth. One speculates that former OnlyFans stars will be passed over for jobs when hiring managers run social media background checks. “The future repercussions on these women will be mind boggling,” a redditor predicts. “How many disowned women, ruined marriages and alienated children will be due to someone flashing their beaver to strangers for pay.”

In the same thread, a MGTOW is giddy over the potential fallout, noting that the consequences for “these e-prostitutes” are sure to be devastating. “They are too dumb to realize it now. It will be a shit show worth watching.” His sole concern is… welfare: “The amount of single mothers asking for hand me down money will go through the roof. The men will have to pay for this shit.” Either that, he says, or society will implode. You can tell which option holds greater appeal for him.

As usual, the angry, disaffected man is his own worst enemy, casting around for proof that women have subjugated him and growing alienated as he confirms this bias again and again. What’s tough about this is that there are real, systemic reasons that he cannot shake the misery of failure: the iniquities of late capitalism, lack of social support, dysfunctional bureaucracy and dimming hope for prosperity in the years ahead. Ironically, women have no doubt joined OnlyFans because of the same suffocating conditions — they are far more likely to be his struggling economic equals than blasé millionaires. But to see that would require first seeing them as human, and the manosphere forbids this. Escaping its pull is the only way out.