We All Live in Fear of Nissan Drivers

Why it seems like Altimas are always reckless on the road

If you drive enough, you start getting opinionated. You have a personal philosophy of who belongs in the left lane of a freeway, your own preferred routes and roads to avoid, a specific relationship to speed limits and maybe a particularized contempt for anyone who fails to signal or rolls through stop signs. And as you decide which driving behaviors irk you most, you inevitably come to associate them with a certain car. For many, that car is any kind of Nissan.

Before coming across this video, I hadn’t thought much about Nissans or the people who get around in them. I reserve my motorist’s ire for Tesla drivers (most of whom seem to have taken the wheel for the first time in their lives), and Jeep guys (read: inveterate tailgaters). But it seems there is a very potent stigma against Nissans — and above all, against the Nissan Altima, a model produced since 1992 — as emblems of vehicular folly. There’s even a subreddit, r/NissanDrivers, that exists to catalogue the alleged sins of Nissan owners: They make illegal turns, total their cars while street racing and seem possessed by a death wish.

TikTok has also savaged Nissan Altimas and the supposedly reckless, irresponsible, show-offy drivers said to be piloting them. Quite a few videos stage a typical encounter: You’re driving 80 or 100 miles an hour, only to be shocked when a Nissan zooms past, probably with their speakers on full-blast. A Nissan is never not “hauling ass,” as they say, and isn’t bound by the ordinary rules of traffic. It’s simply built differently. It was made to go rogue.

I asked Patrick George, editorial director of MEL’s sister publications The Drive and Car Bibles, where this anti-Nissan attitude comes from. He said it was new to him. “There exist many stereotypes around BMW and Tesla drivers, and they’re often deserved, but a Nissan-specific hatred is news to me and strikes me as odd,” he says. “My only theory is it’s a super mainstream brand, so you kind of get everybody? And most people really suck at driving.” He notes that a lot of Nissan GT-R drivers “are weirdos and criminals, but that’s a high-end supercar” and “doesn’t really count” in a discussion of mid-size sedans.

For more insight, I turned to Stef Schrader, the social media editor of Car Bibles and The Drive, who owned a 2002 Nissan Altima in college and considers it “the absolute worst car I’ve ever had the misfortune of driving.” Among its faults, she cites its unresponsive transmission — “I floored it all the time to get it to wake up” — and the QR25DE, “an absolute turd of an engine that apparently likes to eat head gaskets.”

Schrader, at least, channeled her youthful appetite for chaotic driving into a safer hobby: autocross, “a super-cheap, super twisty form of racing that consists of timed runs through a short course made out of cones in a parking lot.” She used the sucky Altima “for laughs,” she says, and “one time we loaded up every seat in the car and it was so floaty and floppy that the whole car came in singing ‘I’m On a Boat.’ I also hung out at a race track a lot, and they wouldn’t let the Altima on track. I think they were afraid it would puke its transmission out or something.” Proof that the distrust of Nissans goes back at least a decade.

“I should see if I’ve got a photo of the time one of my friends wrote ‘FAILTIMA’ across the back. That was its name,” Schrader adds, clearly wistful for the heap of junk despite its limitations.

But what of the assumption that Nissan owners are, on the whole, aggressive and incompetent? Schrader speculates that it could be a result of how many young people drive them. “Either that or they also hate that car so much that they want to get to their destination as soon as possible and get out of the car — maybe after saying a short prayer that someone will total it in the parking lot,” she says.

Then, too, “there’s a bit of a reputation left over from Nissan’s better days when they cared more about building fun stuff and racing it,” which inspires hooning (a slang term from Australia and New Zealand that encompasses any dangerous maneuvers done for fun, like donuts, drifts, burnouts and speeding). Finally, Schrader says, you had to consider the economics that underlie the motorist demographic and their consumer decisions.

“I also think there’s a bit of classism at work in hating Altima drivers,” she explains. “Most Nissan drivers are, whatever, fine. They’re as good or bad as any other American driver. Yet Nissan now has a reputation as the bargain-basement brand that’ll finance everyone, and frankly, ‘I can pay for this’ is really the only reason the Altima might look like a good deal.”

This, she adds, “puts a lot of folks in affordable, more-reliable-than-an-older/junkier-car transportation that could be the make-or-break thing when it comes to keeping a job, or not losing their shirt on repair bills (maybe, hopefully, bonus points if a warranty’s left).”

The upshot? Numbers make the difference, contributing to an impressive sum of anecdotal evidence. “The chance of seeing a bad Altima driver on the road is substantially higher than there is for, say, a bad Passat driver,” Schrader says. “There’s just more Altimas out there.”

So yeah, the memes are fun and the videos occasionally terrifying, but in practice, best not to judge a driver by the beater they happen to be in. Everyone needs to get from point A to point B somehow, and I’m certainly not earning any admiration for my scratched-up Volkswagen Jetta. We’re all in this traffic together. As long as you don’t rear-end me, I won’t badmouth you. 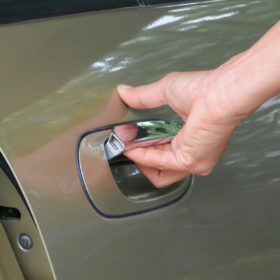 The ‘Slam’ of Your Car Door Is Fake

Do I Really Need to Get My Air Filter and Fluids Replaced, Or Is the Oil Change Guy Full of Shit?