My Favorite Heartbreak Dish of All Time

Rice cake soup is traditionally eaten on Seollal, aka the Korean Lunar New Year, and like any good Korean boy, I did just that on January 25th. But strangely, I can never remember the family gatherings where I would’ve been putting down two bowls of this stuff. For me, tteok-guk was simply the dish my mom made most readily when she knew I felt like, well, shit. Something about a warm bowl of chewy, coin-shaped rice cakes, swimming in a pool of broth with onions, garlic and wisps of egg, helped get my mind off the thing ailing my body, and more frequently, my romantic heart.

Bless her, my mom tried. Again and again, she reminded me that I didn’t need to date as a teenager, and certainly didn’t need to mope for a week at a time because of a fight with a girlfriend or another hormone-fueled dance with woe-is-love depression. She tried to laugh off these low points, assuring me I’d groan at how dramatic I was when I grew up a little (she was right). And more than anything else, she made sure to feed me. I loved eating, so any loss of appetite stuck out as a glaring red flag. Sometimes my inability to eat came from genuine nausea. Other times it was just an emo-kid tantrum in the face of hardship. Either way, rice cake soup served as a detente between me and my mom — a way to get back to normalcy, and maybe even spark a conversation in the process.

After I departed Hawaii for college in L.A., tteok-guk became one of the dishes I looked forward to most on my trips home. It wasn’t that you couldn’t find the soup in restaurants, but it just seemed wrong to treat it like another commodity. That’s partly because of an attachment to my mom’s version, but I also think it has to do with tteok-guk’s prized status as a celebratory New Year dish.

For a long time in historical Korea, rice and beef were too expensive to indulge in on a regular basis. In turn, the soup grew to represent celebration and renewal. The white color of the rice cakes symbolizes purity, while their coin shape offers hope of prosperity and luck. Growing up, I remember my uncles and aunts joking that the years of one’s life weren’t counted in birthdays, but in bowls of tteok-guk. In other words, this wasn’t just another delicious thing to consume. It felt like a part of my lineage, even if I didn’t have much ethnic pride in my late teenage years.

That started to change in my 20s, led by a newfound fascination with every Korean dish I’d taken for granted while eating at my family’s dinner table. My mom still remembers the first time I ever asked for the recipe, during a visit to Hawaii in the weeks after a meltdown of a four-year relationship that I blamed entirely on myself. When I walked into the house at 11 p.m., exhausted and annoyed from the flight, there it was: A bowl of tteok-guk, steaming happily on the table like nothing had ever changed. Like usual, I told my mom I wasn’t hungry, then proceeded to destroy the whole bowl five minutes later. And, like usual, it slowed my mind down and brought my emotions back to neutral, where I could talk about things rather than just fume.

I see the threads that make this bowl of rice cakes and broth so important to me now — the first woman who ever loved me knew it was exactly what I needed, even when I was shouting that I just wanted to starve by myself in the room while blaring a Cursive record. I can’t think of anyone so committed to knowing me better than I do. It’s the kind of unconditional love that makes you aspire to be better.

Nowadays, I also attempt to overfeed everyone I deeply love, romantically or otherwise. And I’m thrilled I’m no longer the biggest fan of my mom’s tteok-guk, — recently, on her first visit to Hawaii, my girlfriend became obsessed with the stuff. You can imagine how pleased my mom was, seeing the eyes of a white girl with roots in the Midwest light up after trying it.

It might’ve been the OG salve for my heartache, but now I get to make it on Valentine’s Day. 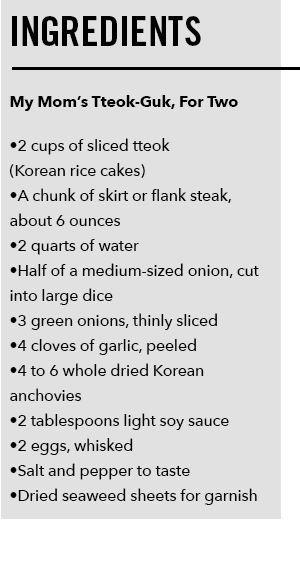 Cut the skirt or flank steak up into small, pinky-sized chunks and throw it into a smallish pot. Cover with some water and bring to a boil, then toss the scummy liquid while reserving the beef. (This initial blanching will make for a lighter, cleaner-tasting broth with less fat.) Put the beef back into the pot along with the onion, garlic and dried anchovies, add two quarts of cold water, and bring back up to a boil. Turn the heat to low, cover the pot and let it simmer for 30 to 45 minutes.

Korean rice cakes are often purchased in frozen packaged form, which means they need to soften up before being cooked. As such, toss them into a bowl with cold water about 15 minutes before you think the broth is done.

After those 30 to 45 minutes pass, add the soy sauce to the broth and taste for seasoning — it’ll probably need a pinch of salt, too. Add the hydrated rice cakes, and once they start to soften (about 1 to 2 minutes), slowly pour the whisked egg into the soup, using a circular motion to create ribbons of egg. Ladle half the soup and all the rice cakes into a bowl. Garnish with green onion, crumbled seaweed and some freshly ground pepper.