Michael Twitty is a writer, culinary historian and historical interpreter with a deep expertise in African-American foodways. Born and raised in Washington, D.C., Twitty is Jewish and gay, and has explored how the diverse elements of his identity intertwine in the James Beard Award-winning book The Cooking Gene. He’s the second in a special Father’s Day series of men talking about a dish that brings as many memories of Dad as it does flavor.

It was always just regular old backyard barbecue. My father and I used to barbecue chicken shoulder, ribs, beef, pork and sometimes turkey breast. We’d make ribs, too. My father had an oil-can grill fashioned by a friend of his for a couple hundred bucks, and it was beautiful. Oil can cut in half and fitted with all the right pieces. We’d cook over that thing for hours.

My father was influenced by his parents’ tradition from southern Virginia. We would season the meat up and let it sit in the refrigerator for hours, up to 18 hours sometimes. Meanwhile, we’d get the fire started with wood charcoal and let it go for a couple of hours at a time, smoking the meat. Not a whole long thing either, but the way they did it in the country: just barbecuing for a couple hours until it’s cooked, then slicing it up.

That was our thing, and I remember it began when I was very young, when I was like eight or nine years old. My dad would barbecue every weekend, and that was a thing that was passed down from generation to generation among men in a Southern family. My father and mother were apart, so I had an extended family on both sides, and it was fine. I saw my father once a week, at least.

And when I went away with my father, he would take me down to where his father and mother were from — Virginia and South Carolina were my favorite for short trips during the summer. That was his way of teaching me of where we came from, what our heritage was. I always enjoyed that.

There were times when my father and I didn’t get along. We weren’t the nicest to each other. But one thing I can say is that all the things that I do now — cooking, the heritage element, the history element, I owe all that to my father. Because he taught me how to put tobacco seed and cotton seed in the ground and let it grow and showed me how to incorporate that into my activities as a historical interpreter. I used to grow that stuff in my backyard because he taught me how to do it. And my father used to say, “You’ll never have to use this, why you asking all these questions about it?” I said, “One day I will use it.” And I did.

So I do have a deep sense of gratitude for those things. My father’s almost 80, and I think there’s a lot of us out here who don’t know what it took to be a free black farmer, to be a sharecropper or to be an enslaved person. My father, though, knew people who had lived all those lives. He knew his great-great-grandfather, who was born into slavery in Virginia in the 1830s. My father was 13 when he died, and knew him well — saw whip marks on this man’s back. So my father was, in many ways, my strongest link to the South, because my grandparents were Great Migration people.

My father and I used to love to go to the farmers’ market and get produce. He used to love talking to the farmers. I didn’t realize at the time that between all the fidgeting, I was actually picking up a lot of knowledge. Plus, my father believed in urban gardening and all those things. In so many ways, my father implanted this gene for my own cooking. Cooking was one of the few things where we had a real deep relationship as father and son.

My father would let me have a lot of trial-and-error in cooking, too. The day I knew that I had done right I must’ve been 14. I said, “Daddy, the meat is done inside, it’s not tough, and it’s a pecan-color brown.” My father had bought a sausage, and he said, “A pecan-color brown, mm-hmm. That’s what you’re supposed to do.” He showed me how to carve up the meat, how to chop it. It was a very proud moment for me.

So, you wanna cook it over wood charcoal to a pecan-color brown, until it’s done and juicy. Put some kind of a rub on the meat and let it marinate, then use a basting sauce and a finishing sauce. Those are the three different layers of flavor for the meat. That’s what my grandmother taught me. Since then, I’ve experimented with different types of sauces with my grandfather’s friends. Basically, they’d take a tomato-base sauce, and a mustard-base sauce and combine them. It depends on your family’s taste, exactly how much the ratio is, you know what I’m saying?

There’s apple cider vinegar in them for sure, though. We used to make the sauce with tomato paste, vinegar and chopped-up celery, onions and garlic — and ketchup, because my grandma’s barbecue sauce always had a bit of ketchup to it, given that she was from Alabama. The sauce tradition from Alabama and Mississippi is to throw in the kitchen sink with orange juice, vinegar, tomato, Worcestershire sauce and lemon, making it tangy and not too sweet.

My father loved to brag on me when I was younger. Pre-coming-out Michael could do no wrong in his father’s eyes. But I came out when I was 16, and both my parents didn’t really know what to do with me. I felt like a lemon. Growing up in a D.C. area where a lot of black boys didn’t make it out to the other side of 25 years old, I felt like a lot of potential and promise wasn’t gonna be fulfilled by me, in my parents’ eyes. But you know, things turned out okay. My relationship to my father is quiet today. It’s respectable, but it’s quiet. And that’s all right. 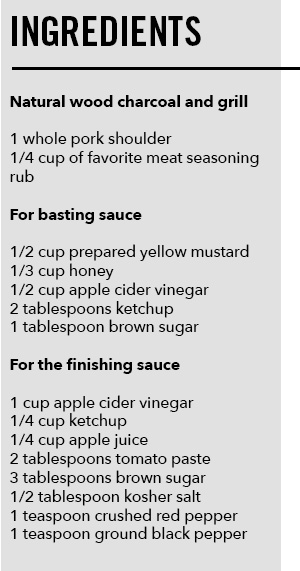 Twitty’s barbecues included chicken, pork shoulder, beef ribs and more, but we’re focusing on the pork shoulder for now. Whatever you’re cooking, you want a pecan-brown crust and a juicy interior, cooked at moderate temperature over a few hours, not necessarily until it’s falling-apart tender.

The night before cooking, score the fat side of the pork shoulder with a sharp knife, creating shallow criss-crossing cuts about a half inch apart. You can cut the shoulder in half, too, if you want to barbecue a smaller portion. Generously coat the pork in your preferred rub — here’s a take on a Carolina rub, for consistency’s sake — and place in a container and cover with plastic. Place in the fridge to marinate overnight.

The next day, heat up the charcoal for the grill using your preferred method (a chimney is always efficient). Once the coals are white-hot, dump them into one side of your grill, creating a two-zone fire. Check that you can open the grate to add more coals later if necessary, and then place the pork shoulder next to the coals, so it’ll cook slowly from the indirect heat. The cold meat will make the temperature in the grill drop rapidly, but you want the thermometer to bounce back to about 325 degrees and hold steady there.

As the pork begins to cook, make the basting and finishing sauces. The former is really easy: Just combine the ingredients and use it to mop the pork shoulder when the mood strikes you. (Do remember that opening a grill up repeatedly can make the temperature drop.) The latter is just as simple, but it needs to simmer in a saucepan over medium-high heat until it comes to a boil and thickens slightly.

If you notice the coals starting to die out, add more charcoal — it’s better if you fire it up in a chimney first, but you can add it straight to the grill if necessary. Keep cooking the pork, rotating it and basting, until the outside is deeply caramelized and a thermometer reads 170 degrees when inserted into the center of the meat. It’ll take about two to three hours for a full shoulder to cook, depending on how good your fire-management skills are. Let it rest on a cutting board for 30 minutes, then slice and serve with the finishing sauce and some crunchy sea salt.