‘No Seat at the Party’: Why Privileged White Men Get Sucked Into the Cult of Victimhood

A fundamental point of agreement among the oft-fractured men’s right movement is the lament that society has done men wrong. Members often refer to themselves as “second-class citizens” who are just looking for the same rights as everyone else, conveniently side-stepping the fact that straight white men have long been the most privileged class in American society.

This is the central theme of a forthcoming paper from Emily K. Carian, assistant professor of sociology at California State University, San Bernardino, who conducted in-depth interviews with 31 men’s rights activists about what led them to such a worldview. It stemmed from her dissertation, which compared MRAs to guys who identify as feminists, finding their reaction to feminism to be surprisingly similar: It made both of them feel like the bad guy.

I recently spoke with Carian about why these men view themselves as victims, how they believe cultural representations of men are entirely negative and the consequences of straight white men believing that there are “no seats at the party” for them.

No one likes to think of themselves as the bad guy. So it’s not surprising that people in the men’s rights movement would be put off by that perception, right?

Right. No one likes to think of themselves as immoral or being privileged either, so these men start to see themselves as victims. Their pathway to the men’s right movement really comes from a perception that straight white men are the bad guys, which they glean from feminists, sexual harassment training and pop culture. Everyone has a psychological need to see themselves as part of a group that’s morally good. And in the culture, feminist, anti-racist and anti-hetero sexist narratives get more attention. That said, most feminists and anti-racists don’t mean to say that white men are bad. And “privileged” doesn’t necessarily mean immorality, but many of the men’s rights activists I spoke to perceive it that way. When they hear “men of privilege,” they hear “white people are privileged” and take that to mean that men are bad, white people are bad and so on.

How do you think white supremacism plays into this?

What’s the language they use to explain that?

The title of the paper, “No Seat at the Party,” comes from one of the interviews I did with a man who described straight white men as having “no seat at this party.” The “party” is basically identity politics, in which straight white men feel like they can’t celebrate their identities or make claims the way other groups can. That’s how this man spoke about himself as a victim: being excluded from a party. It’s a really interesting way of putting it. To reiterate, this is the way he feels, it’s not necessarily what’s happening.

What are some other examples of so-called “victimization” these men claim?

There’s not necessarily a connection to race in that example, but when we think about the overlap between white supremacy and male supremacist movements, one thing that’s often missing from men’s rights discourse is about mass incarceration and Black men. If you look at the men’s rights subreddit, I’m sure they touch on mass incarceration from a gendered perspective in their mission statement or FAQ. But when you talk to people in the men’s rights movement, that’s not what brought them to the movement.

Again, what brought them to the movement was a sense that people perceive them as immoral. By framing themselves as victims, they can feel better about themselves because we think of victims as blameless, moral people, right? So if white men are victims, then they’re good people. For a lot of the men I interviewed, they actually do very little activism. It was less about changing things and more about changing the way they’re perceived so they could change the way they feel about themselves. A lot of the work of the men’s rights movement is really about changing perceptions and less about activism, trying to get people to think of straight white men as blameless victims of a feminist society.

Did you reach any conclusions, personally, about men’s right activists? Did these conversations change your thinking at all?

It’s tricky, because there is tension here. You want to understand these groups, but that doesn’t mean it makes what they do okay. So understanding that men come to this movement because they feel bad about the way they’re being perceived might make it seem okay for them to join in the first place. But how do we find other ways for people to deal with these emotions when they’re called out for being privileged?

So much of this is wrapped up in other things that are afflicting white men, like loneliness. I imagine the companionship they find in these movements can be intoxicating.

One hundred percent. Gender expectations around how you act with other men are very real, and some of the men I talked to describe those expectations in the exact same way. When they find like-minded men who also see themselves as victims, they can build community around that. And they felt really positive about the community they were building. I asked one guy, “How is a man supposed to act with friends?” And he said something like, “It’s supposed to be very surface level and you can ask for help, but only for things like helping to tile your kitchen.” Basically, you can’t go deeper than that, so these movements open opportunities to have more consequential connections. That’s really unfortunate because people need connection, but in this case, it’s bringing them to a toxic male supremacist community.

I’m curious what you thought when you were watching what happened on January 6th at the Capitol. These seem to be a lot of the kinds of people you’re talking about.

Absolutely. A lot of people’s reaction to the insurrection was that white supremacy undeniably had a role in it. But I think the role of male supremacism is missing from a lot of those conversations. It’s important to call out the fact that misogyny is the foundation of a lot of groups like the Proud Boys. That’s part of what they organize around.

How does this change or get better in your estimation?

I think we as a culture need to think about new narratives for masculinity. Joining the men’s rights movement is one possible response, but what are the others? We as a culture need to come up with those other possibilities. This paper came out of a larger project in which I also interviewed men who identify as feminists, and I found very similar processes at play. Feminist men also had a pretty negative reaction to feminism when they first heard about it. They, too, thought they were being called bad guys and feminism was their way of dealing with it. By seeing themselves as feminist men, they saw themselves as allies to women, as exceptions to this idea that men are bad.

How does the Institute on Male Supremacism, which you helped create, fit into all of this?

Sometimes media coverage of these groups doesn’t recognize that male supremacy is foundational to them. For example, I can think of articles that paint a very sympathetic picture of incels, or men who have been rejected by women — suggesting that that’s why they’re sad. That could be part of a particular incel’s history, but that’s not why they’re part of the movement. I mean, every man has been rejected, right? Being romantically rejected is a universal human experience. So there’s something else going on, and that something else is male supremacy. One of the reasons we wanted to found the institute is to bring experts together, have conversations with journalists and push the conversation so that we can begin to recognize that male supremacy and misogyny is baked into these groups. Because it absolutely is. 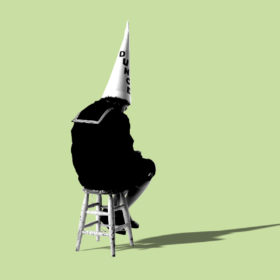 The Punishment Rarely Fits the Crime for Misbehaving Boys in School