The ‘Hot’ Politician Is a Very Risky Proposition

If you’re thirsting for a duly elected dude, you’re in for a world of hurt

If you woke up in the morning to find social media buzzing about how attractive you are, you’d probably take it as good news. I know I would — that’s why I’m always posting thirst traps! But I’ve yet to accrue enough compliments to justify a slew of headlines declaring the internet’s collective crush on me. I’m not, in other words, Jacob Frey, the hot mayor of Minneapolis. 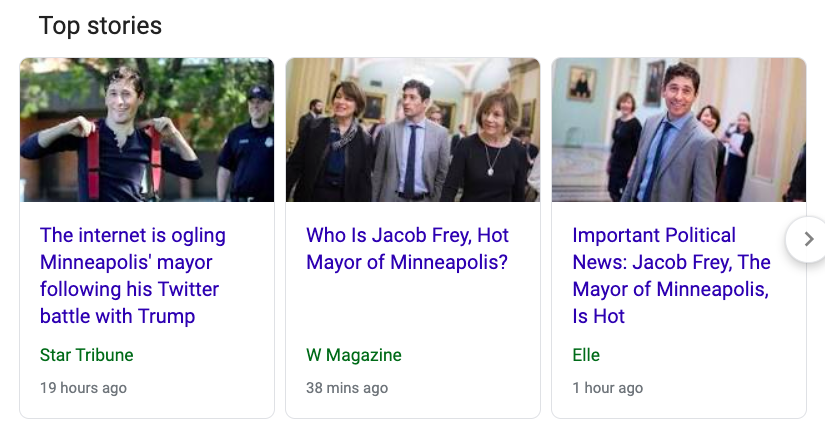 But while we normal people could happily bask in the knowledge that our looks have drawn praise from a widened circle of admirers, politicians cannot. In fact, when everyone starts lusting after a duly elected dude — and handsome men are who this generally happens to, likely because this kind of objectification feels less icky or degrading than it would with a woman — it seems to augur poorly. When I see tweets like, “whoa, my congressman can get it,” I start waiting for the other shoe to drop. Will it turn out they supported an awful, destructive piece of legislation? Do they get their campaign money from a nightmare industry lobby? Have they written or said something, at any point in the past 40 years, that really, indisputably sucks ass?

Oh, and that appealingly boyish face of his? He’d been slathering it with dark paint to dress up as people of color, demonstrating just how deeply embedded in the sick ruling class he’d been since birth. It wasn’t the attention paid to his appearance that made him a terrible leader — it just made his cratering that more dramatic.

Or how about Beto O’Rourke? When he was the guy running in Texas to unseat Senator Ted Cruz, a sweaty toadstool of a man, he had a kind of aw-shucks, sleeves-rolled-up, used-to-be-a-punk charm. He was tall! And wiry! People earnestly speculated that if he ran for president, all the soccer moms of America would be changing their panties twice a day. Unfortunately, it appears he believed this, and now he’s wasting everyone’s time by showing up to debates despite polling around 2 percent nationally. In hindsight, it’s easy to pinpoint right where the tide turned: 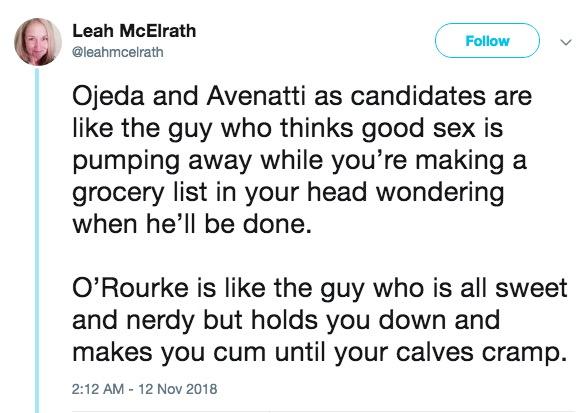 Yep, that’s it. Should have quit when this appalling sex tweet went viral. Nothing good was ever going to follow. These days, it’s hard to recall the era of Hot Beto, let alone the fever that would have prompted such a comment. Not even Annie Leibowitz could make him look like a winner.

Damn, John Edwards, there’s another victim of Handsome Politician Syndrome. One day, he’s a rugged, truck-driving, populist heartthrob; the next, we find out he’s paying a studio apartment’s rent for a haircut and spending campaign funds to cover up the child he fathered in the course of an extramarital affair (while his wife was battling cancer, no less). I suppose that when you’re trading on your dudely charms in the political arena, they sometimes carry you too far — as either Gary Hart or Bill Clinton might attest. It would be wiser to vote for ugly men, as Republicans tend to, or, if we must cast our lot with daddy figures, try to downplay and ignore their physical attributes. They don’t need their egos fluffed, first of all, and you don’t want to be cleaning up all those slavering tweets when they’re inevitably shown to be less than perfect.

Besides all that, Jacob Frey primarily deserves his kudos for standing up to Trump on the immigration issue. Being a snack is secondary.

All in all, I think Obama strikes the best balance here. Yes, people enjoyed those beach photos, and they made music videos professing their love, etc., yet it all came with the tacit understanding that he was more dorky-cute than a smoldering stud. (It also helps that people stan Michelle and the Obamas’ marriage as much, if not far more than, Barack himself.) Unless we can dig up some new candidates on this level, maybe we should force everyone in government to wear paper bags over their heads. It would solve any number of problems, no doubt.

Truth be told, though, wherever a politician falls on the hotness scale, I’m probably sick of looking at ’em.